Once again, the AMFest Barcelona, an experimental and instrumental music festival in the heart of the Catalan capital, proved to be a nest of imaginative and forward-thinking bands either...

Once again, the AMFest Barcelona, an experimental and instrumental music festival in the heart of the Catalan capital, proved to be a nest of imaginative and forward-thinking bands either from the region or abroad, Thursday to Saturday, October 26th to 28th.

Instead of making the typical intro analysing the festival, let just go straight to reviewing the gigs.

Vivid post-metal was what we had for starters with locals Degraey. Rocky and dense at times, they were the best of starts in the festival. 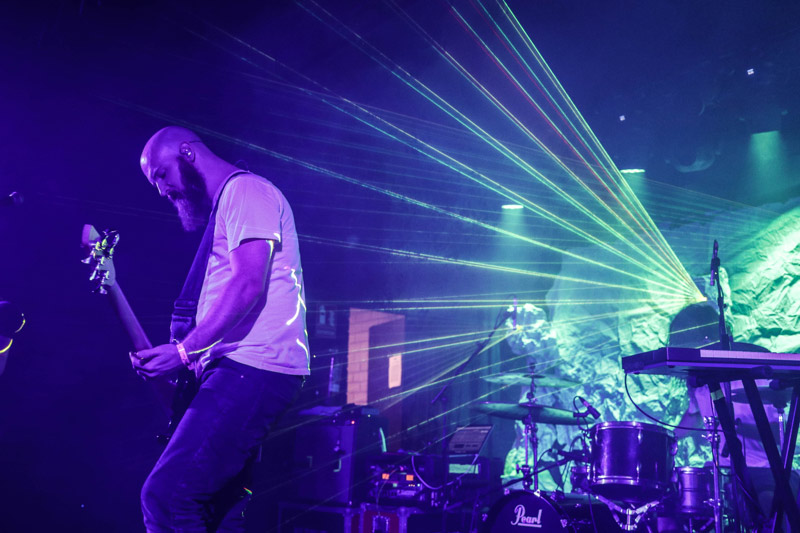 Aussies Sleepmakeswaves presented their new record – Made of Breath Only – and new line-up (at least in Spain, as their guitarist Daniel Oreskovic hadn’t played here yet). They’re less metal than before and more dynamic, and they play way better with the tempos. If they let more electronic elements to appear in their music, as heard in the aforementioned record, a whole new path could be opened for the band. 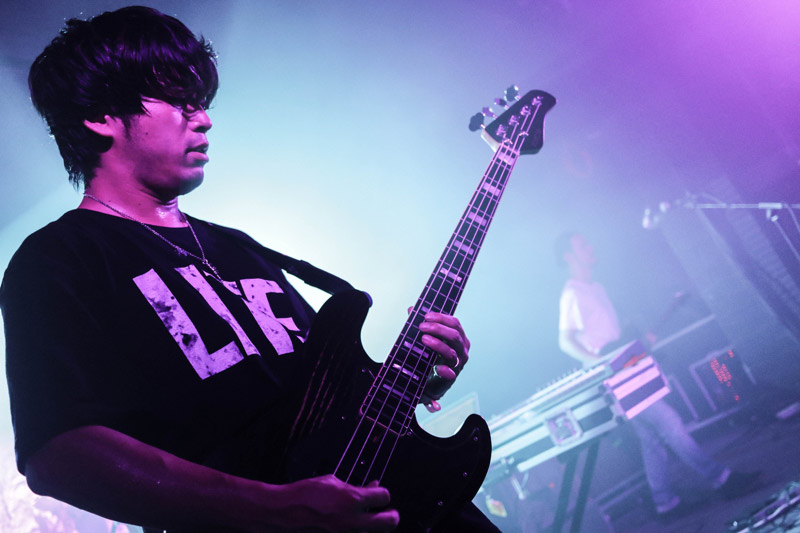 With Japan’s Lite everything seems possible. Not only they are virtuosos but they can twist their skills in order to create sonic labyrinths where you can really loose yourself, but they can also send condensed pills of melody like “Balloon”, off their most recent creation, Cubic, with an astonishing change of tone and pace in its last third. For once, complicating the music gives a great and surprising result. 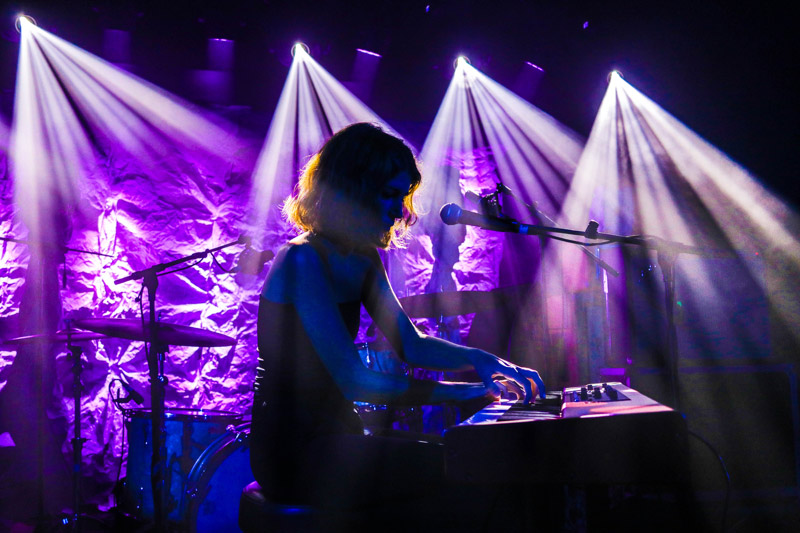 Marina Herlop is a Barcelonan pianist whose music at first echoes the debut work of Deutsche Grammophone’s Joep Beving, but very quickly turns to a form of classicism that put her ages away from other solo artists. Working on rhythm, cadence, melodies and changes in direction, it’s impossible to know when one melody start and another ends, exposing a timeless feeling and passion that forms the basis of her music, adaptable for a small room or an 800-people venue. Very worthy of a listen. 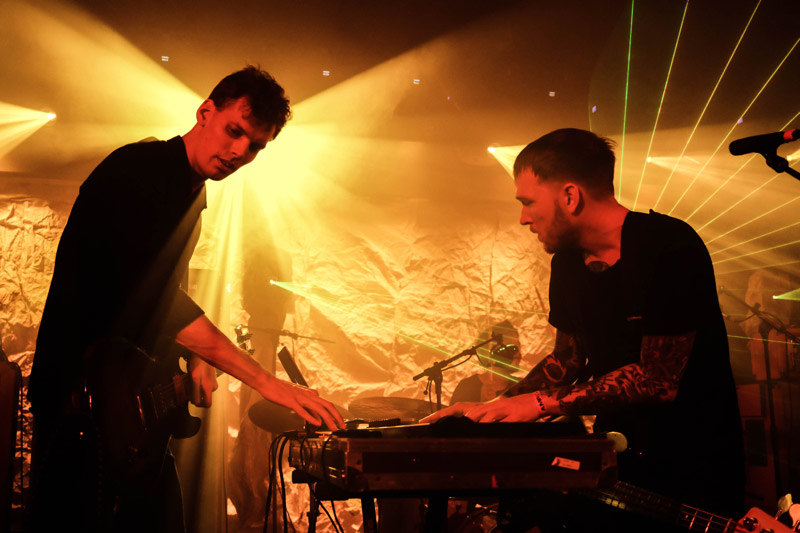 Sweden’s pg.lost lived up to their reputation of hard workers with a sense of the post-rock that gets them close to Sleepmakeswaves, Cult Of Luna (a band where one of their members plays) and Explosions in the Sky, but even though these influences are very clear in name, they’re not as obvious in music. Stony numbers like “Off The Beaten Path” are mixed with crystalline, pristine and epic songs like the one that opens their latest record, Versus, “Ikaros” where electronic percussions and keyboards, and distorted voices create a haunting effect, the kind of song that will stick in your mind for days. Mogwai could take some notes from it. 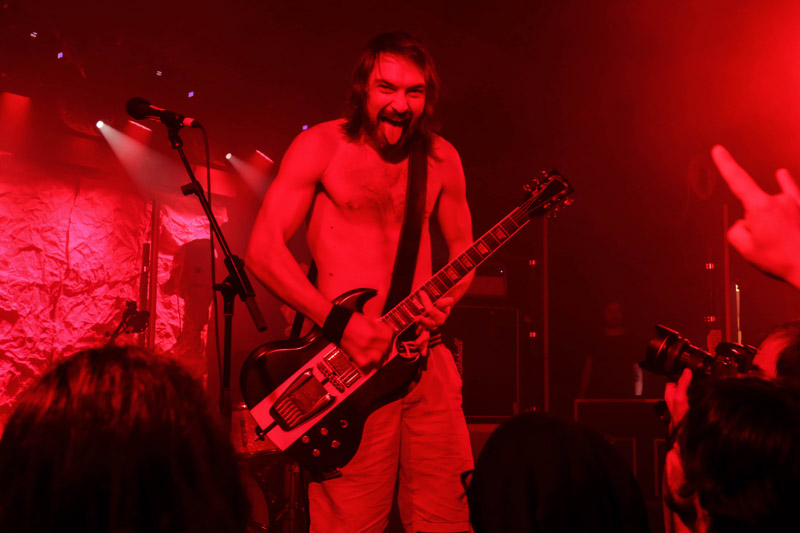 Truckfighters’ soundcheck was endless and that made them start with a 15-minute delay. Nicknamed by Josh Homme, “The best band that ever existed,” their noisy stoner rock is ideal for a festive kind of gig but doesn’t leave a great imprint in your mind, once finished. 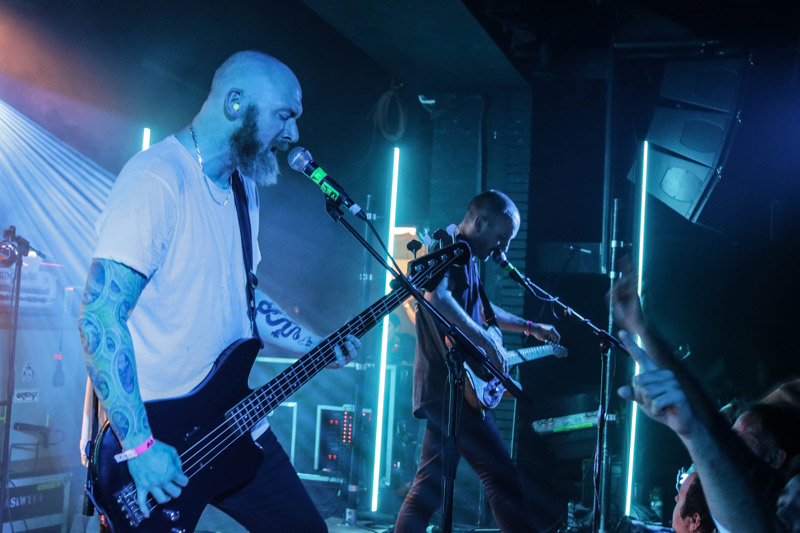 The delay in the schedule, courtesy of Truckfighters, piled on the guitar problems of And So I Watch You From Afar’s Niall Kennedy. But the lads from Belfast won over the audience just by stepping onstage, so the party was on since the very beginning. They’re arguably the most imaginative and varied post-rock band on Earth right now. New songs like “Dying Giants”, with a math-rock section, or “A Slow Unfolding of Things”, more straightforward but without the sense of being made just for the moment, put them as leaders of the post-rock genre. And then, if you get classics like “BEAUTIFULUNIVERSEMASTERSCHAMPION”, “Set Guitars to Kill”, “Eunoia” or “The Voiceless”, you got a tremendous gig/band in front of you. 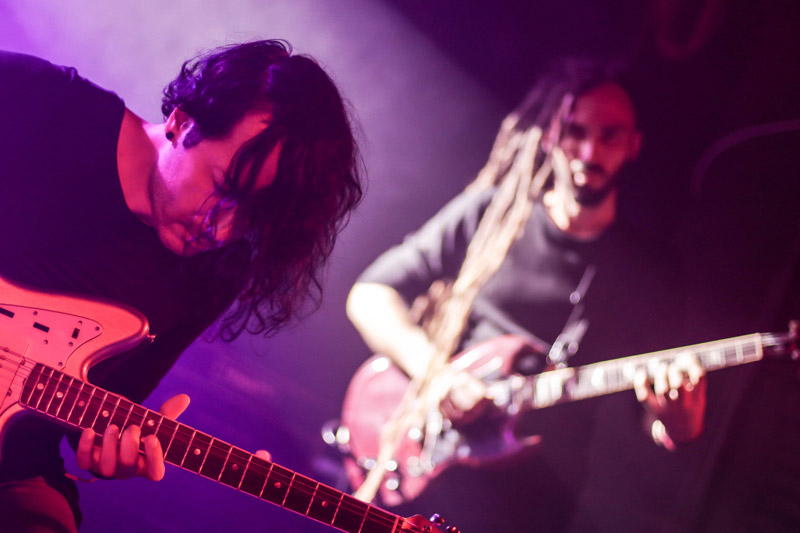 A live debut: Blak. At first, a project between friends that made a song for the film “Vostok”, about the 1960s Russian project to send cosmonauts to space, Blak fully developed when the Swiss label Elusive Sound wanted them to record their debut album. Both Eloi (lead guitar) and Eloi (second lead guitar) and Carles (drummer) fleshed all the tunes that formed Between Darkness And Light, a record that stares right in the face of Japan’s Mono, but also incorporates a passion for a big sound and small details. It was their live debut, but the maturity of their musical proposal puts them at the same level as many of the other bands we talked about in this review. They could become huge in the post-rock community. 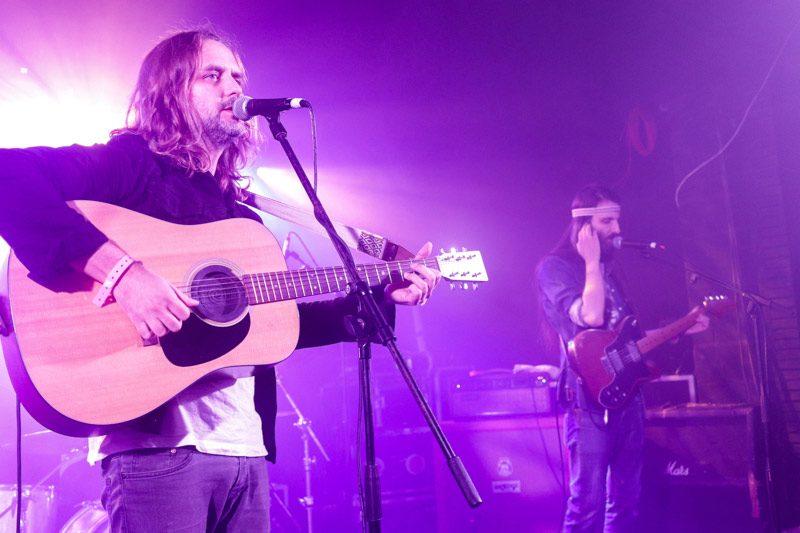 Folk, psychedelica, prog-rock… it’s a bit difficult to pinpoint The Last 3 Lines but the Barcelonans, after ten years and four records are a proof of resilience and arduous work in a difficult country for music. Shading the most electric Neil Young and the road-movie side of Wovenhand, their powerful sound -that allowed them to open for Placebo in their most recent visit to Barcelona- showed there’s a sort of underground network of bands in this country that are worth discovering. 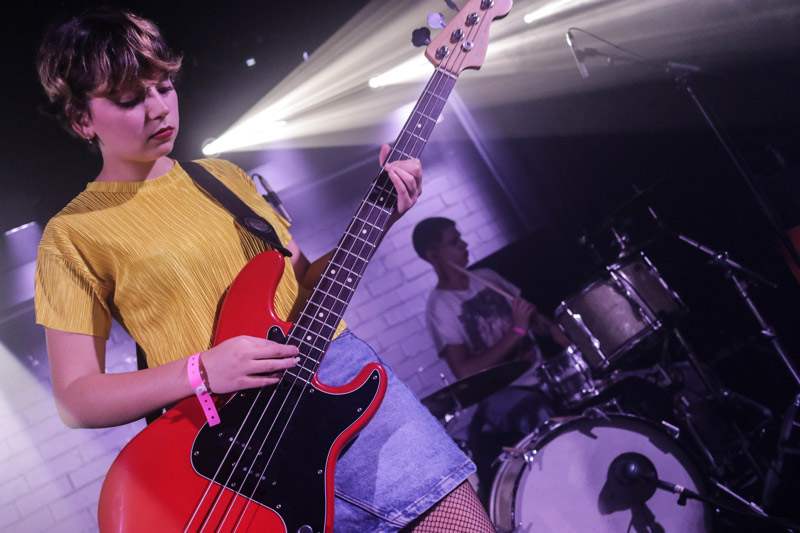 The youngest band in the line-up, Mourn were introducing their second record, Ha, Ha, He. They draw from many places, from early Siouxsie & The Banshees (overall in their singer’s voice), Throwing Muses, The Ramones or The Replacements, of whom they made a cover of “Color Me Impressed”. Short powerful, energetic and varied songs, they’re in their early twenties and late teens, but their confidence onstage is astonishing. Fresh from their recent trip to the USA, they were a real treat. 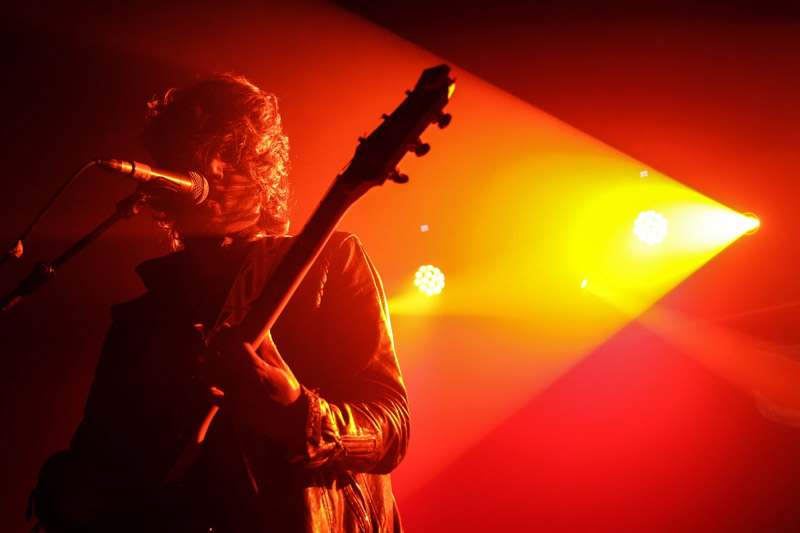 London legends My Vitriol are trying to be more active on the road, as their drummer Ravi Kesavaram told to yours truly. Their apparent lack of onstage time didn’t show at all, and even missing a permanent bassist didn’t hamper the energy of classics like “Grounded”, thanks to a clever use of technology and a restless search for different guitar sounds that even made them look back at the most swirling Siouxsie & The Banshees and the early Psychedelic Furs. They’re on top form and still have a big lot to offer. 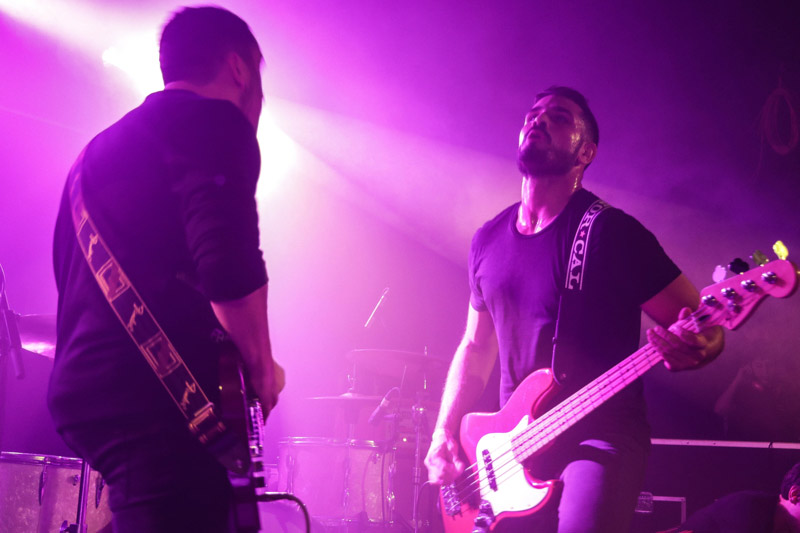 From an elegant and spirited form of indie rock to pure restless vitality. The Wax come from the centre of Catalonia, and their raw form of screamy post-hardcore already has a legion of fans, after just some EPs and their full first album, Don’t Belong. Rebellious, close, frantic, vigorous tracks like “Dead City” are a punch in the nuts that don’t leave anybody indifferent. 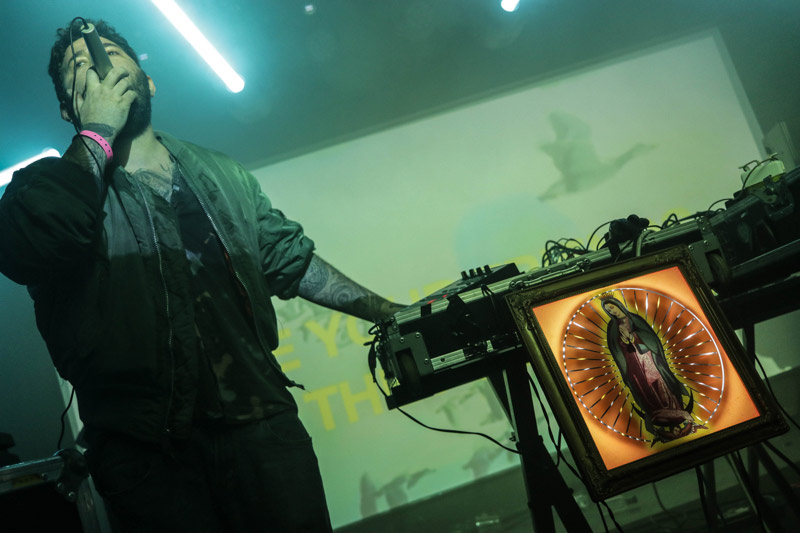 Last but not least, The Suicide of Western Culture offered their personal lysergic take on either pumped up or cinematic electronics. They didn’t go for single tracks but for a block of raw, basic melodies that felt like entering a tunnel while being bombarded by old war images and scenes from lost documentaries.

The final conclusion one can feel from the AMFest is that from one year to another, their creators really fight to bring crème of the crop of instrumental music (their original aim) but also giving chances to an array of bands that make this little festival a really worthy and interesting affair. If you ever come to Barcelona, this is the place to be.