Set over four stages with a total of 68 bands, ArcTanGent 2015 was jam-packed full of amazing musical performances including sets from international heavyweights 65daysofstatic, The Dillinger Escape Plan,... 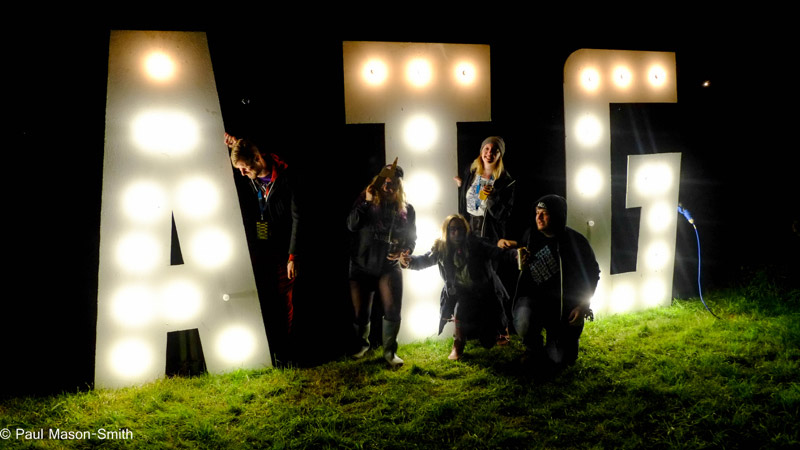 ArcTanGent, set on Fernhill Farm near Bristol, U.K., is an offshoot of the award-winning 2000 Trees Festival. It has been running for three years and is the only U.K. festival dedicated (pretty much exclusively) to the genres of math-rock, post-rock, noise-rock and alt-rock. Set over four stages with a total of 68 bands, ArcTanGent 2015 was jam-packed full of amazing musical performances including sets from international heavyweights 65daysofstatic, The Dillinger Escape Plan, Deafheaven and recently reformed The Fall of Troy, Thursday-Saturday, August 20th-22nd.

The festival site featured some rather quirky shops, art installations, a shisha lounge and a fine array of food venders touting fresh local produce. Choices ranged from homemade pad thai and locally sourced farm sausages to wood-fired pizzas and venison kebabs. There was even a shack selling Cheeros run by the brother of the site owner. The bars were pushing a fine collection of locally sourced beer, cider and ales as well churning out some kicking cocktails (I had a white Russian that practically put me on my ass). All in all, the drink prices were pretty reasonable and could even be considered cheap compared with most other festivals. One of the true highlights of the festival (besides the music) was the silent disco, which ran from 11pm till 3am. Nearly every festivalgoer made an appearance and people danced like idiots to a mixture of grunge rock and cheesy pop until the early hours of the morning. 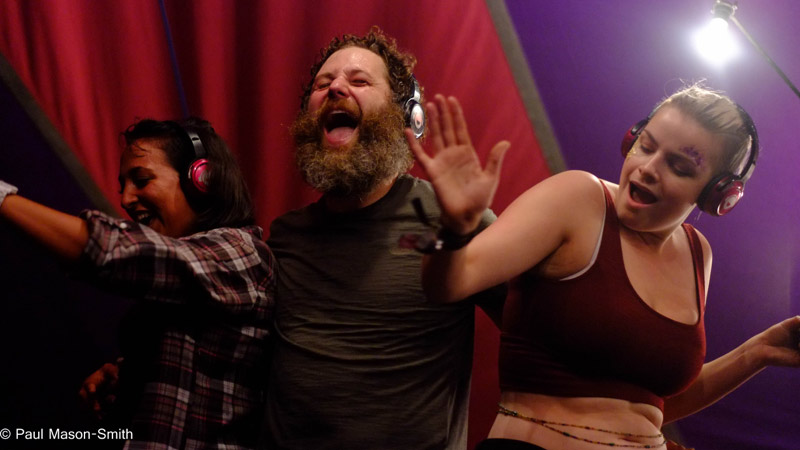 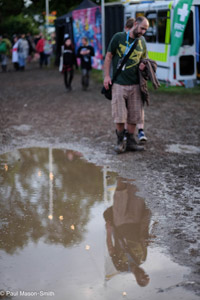 For an event with a 5,000-person capacity, ArcTanGent felt extremely intimate. Camping was split over two of the main arenas, allowing people the choice of setting up by either the Arc or Bixler stages. Despite the terrible weather the atmosphere throughout the entire weekend was amazing and everyone seemed genuinely appreciative of the chance to see so many niche bands playing together. There is no other event like this in the U.K. and a sense of passion really seemed to resonate amongst the festivalgoers throughout the weekend. 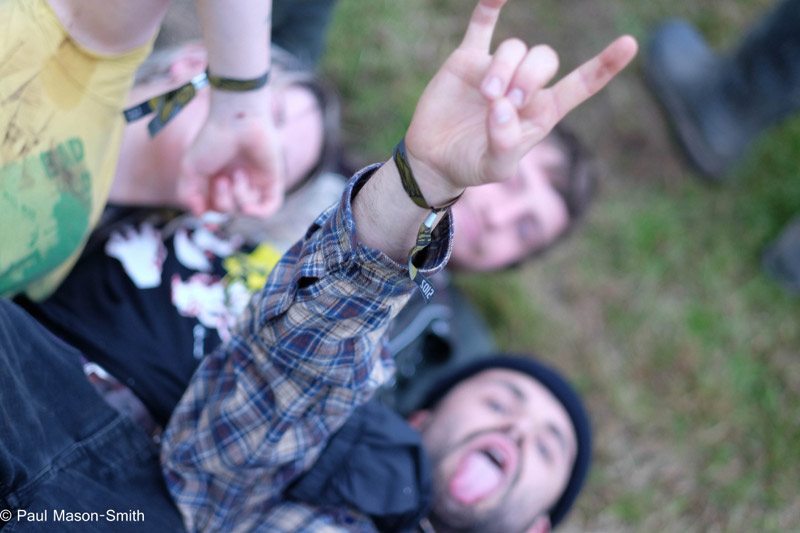 The slightly dubious weather forecast did not seem to dissuade the crowds of people patiently waiting in line to acquire their wristbands. There was a sense of excitement in the air, a premonition of what was to come. Thursday was the afternoon of returning bands, specifically chosen by the organisers for their performances over previous years and they did not disappoint. 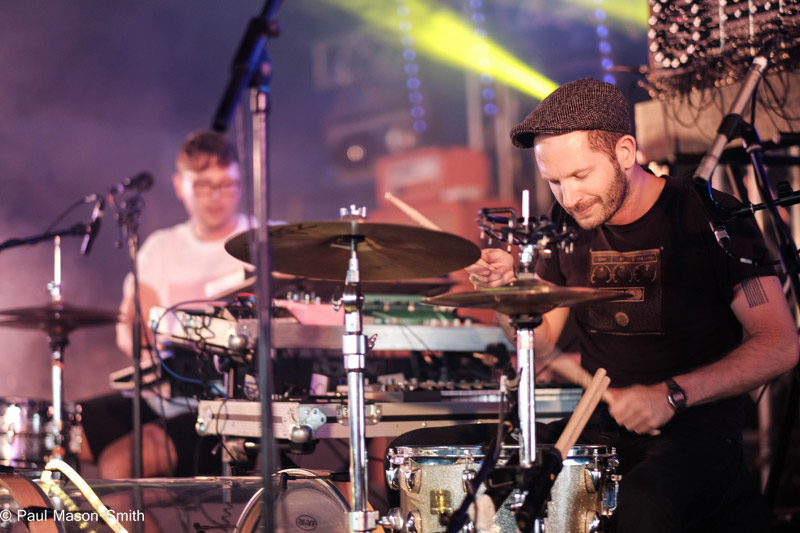 The first act of note was the Derbyshire duet AK/DK. Playing practically their entire first album in full, both members sported drum kits as well as an ecliptic mixture of vintage synths and reel-to-reel, their infectious electronic sounds and driving rhythms ignited the Yohkai Stage. Hats off to the soundman who did a sterling effort making them sound huge. They were an awesome introduction to the music of ArcTanGent. 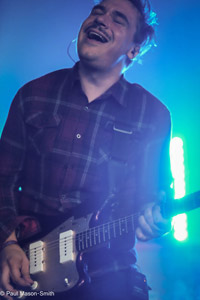 Hailing from Luxembourg, Mutiny On the Bounty blended chaotic, yet almost orchestral melody with pounding syncopated riffs. Their set drove the crowd into frenzy. Apparently they’d played over 150 gigs in the last year and this was more than evident in their performance. The set was so tight that even the tiniest of breaks in their music were exaggerate, the smallest transients intensified. They drew so many people that when they finally finished they left a mammoth crowd cheering and gagging for more. 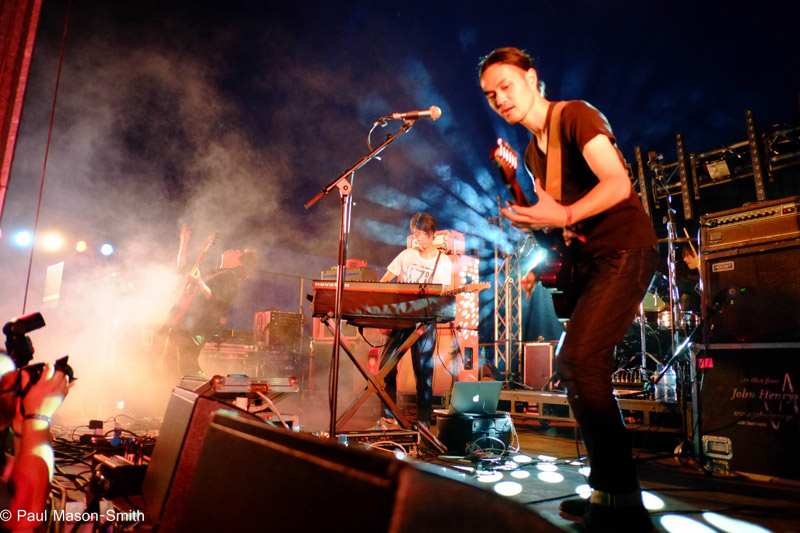 The penultimate act of the night was the Japanese instrumental band Lite. They were fantastic; an intriguing combination of highly technical beats and slightly glitchy electronics interspersed with heavier guitar driven sections reminiscent of ‘80s prog. Having flown in earlier in the week to begin their current U.K. tour, it would have been entirely reasonable if jetlag had got the better of them. But this was not the case. There dedicated cult following packed out the tent. Arms raised in elation; their adoration infused the atmosphere, empowering the band. 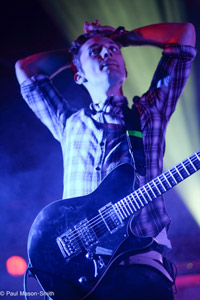 The headlining band 65daysofstatic ended up going on stage nearly half an hour late because of technical issues, but the wait just added to the suspense. By the time they started the atmosphere was electric. There was a real sense of harmony to their performance. Drawing from their vast back catalogue they dynamics in their music were excellent and they played song ranging from the quiet melodic mix of fizzy electronics that define their recent album Wild Light to the more traditional post-rock of years gone by. This was exemplified by their encore in which they performance of one of their definitive songs “Retreat! Retreat!”. It was a little bit of a shame that they were unable to play any of their brand new tracks for legal reasons (because of their contribution to the upcoming video game No Mans Sky) but all in all they were outstanding. Their set really completed a brilliant day of music. 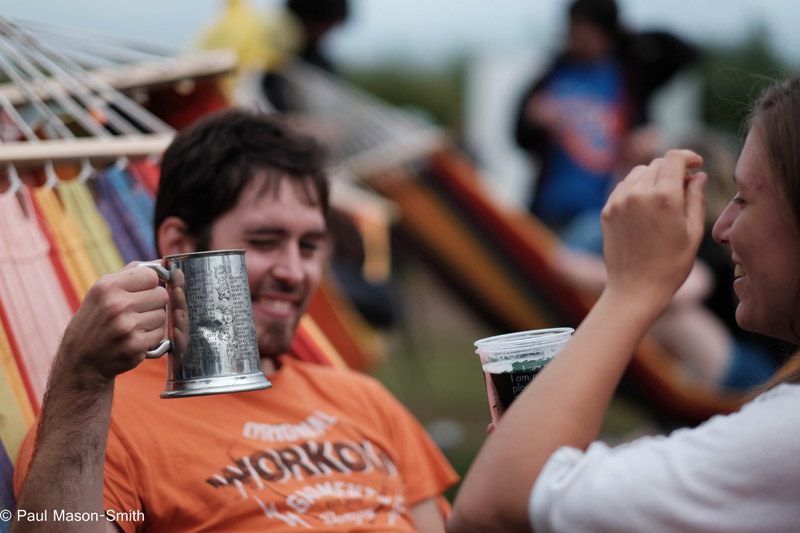 Because the festivities had finished fairly early on Thursday most people didn’t seem that jaded the next day. It had rained heavily throughout the night so one might expect the atmosphere to be slightly downhearted. Instead there was a real sense of electricity in the campsite. As the morning wore on more and more people donned their wellies and set out. 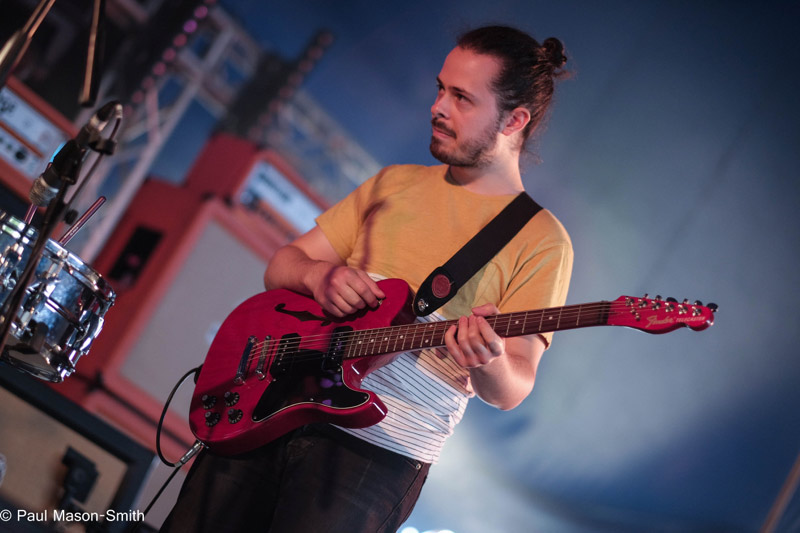 The first band to grace the Yohkai Tent on Friday morning was the French group Quadrupéde. They took syncopated drums, guitars and synths then blended them together with weird and wonderful samples to create an intricate interplay of sounds. Considering they were only a two-piece and a laptop they managed to efficiently splice a variety of musical styles into something that sounded much bigger than the sum of its parts. Everyone in the crowd seemed to get this and their set finished with raucous applause usually reserved for act playing much later in the day. 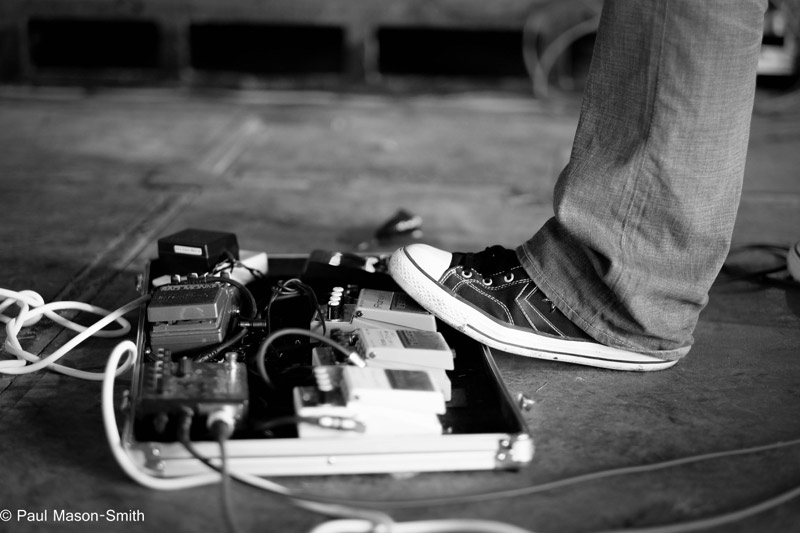 The next band that stood out was MaybeSheWill. When they came on stage I think that most people expected them to perform as their usual five-piece lineup. The crowd was elated to find them joined on stage by a multitude of string and brass including violinist Sophie Green from Her Name is Calla. As always their performance was a precisely structured, intelligently crafted masterpiece but the addition of the orchestral instrument really added a touch of magic that left everyone in awe. They even got an encore, something that practically never happens to bands playing in the afternoon at festivals. 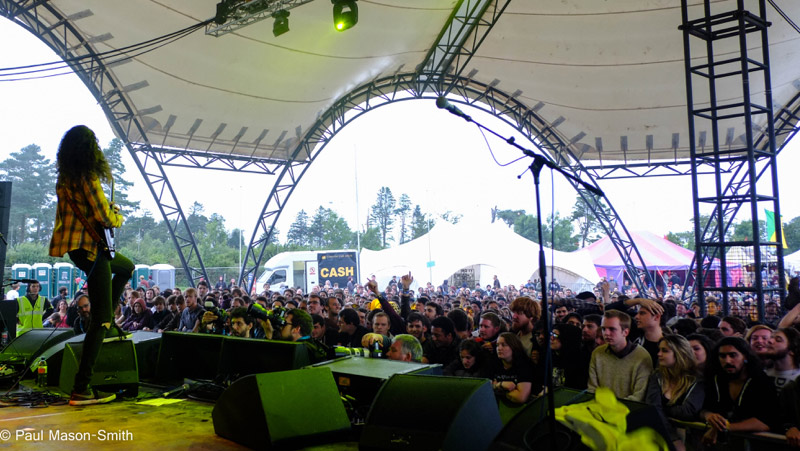 The Fall of Troy are a math-orientated post-hardcore band whom disbanded in 2009 after producing four critically acclaimed albums, but then reformed with their original lineup in December 2013. Since then they have made a habit of picking an album and playing it in full each time they perform. This was not the case at ArcTanGent where they choose to play a variety of their back catalogue. Their performance was sensational and the audience went crazy for them. Of note was the exceptional talent of frontman Thomas Erak. Its hard to understand how a three-piece band can make so much noise and harbour so much energy until you see them live. 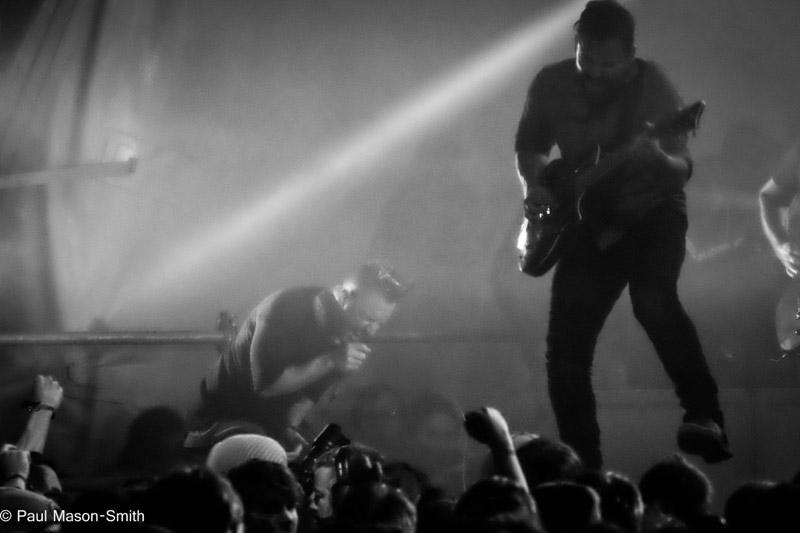 As expected from an act of their stature, the headlining band on the Arc Stage was The Dillinger Escape Plan, who offered up an extremely powerful performance. They probably drew the largest audience of the weekend and judging by their set it was evident why. Having recently toured with Three Trapped Tigers they tailored their set to the math-rock orientated audience perfectly, much to the delight of everyone in the audience. Drawing heavily from their more recent albums they play for nearly an hour and a half. How they are able to maintain that kind of intensity for so long is anyone’s guess. The highlight of there set was the lead singer Greg Puciato climbing high into the scaffolding of the Arc Stage then throwing himself into the crowd. It was crazy. Personally I’m glad that I was not one of the bodies below that cushioned his fall. 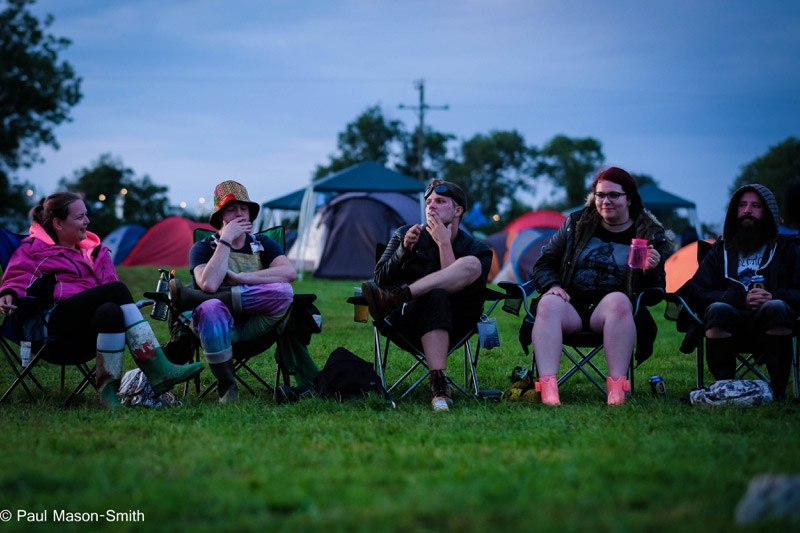 On the final morning there was a sense dissonance amongst the festivalgoers. Rather remarkably the sky had cleared, although this was a mixed curse and blessing. The glistening rays had converted tents into saunas, forcing their inhabitants to evacuate early. This mixed with a magnitude of rather tender demeanors led to a lot of people planting themselves firmly on the grassy embankments near the Arc Stage.

The first band we caught as the Swedish experimental instrumental group PG Lost. Their set was atmospheric, orchestral and deeply emotive in a way that was little reminiscent of bands like This Will Destroy You and Explosions In The Sky. Considering the mass hangover, their set was exactly what the doctor would have ordered. There music was so soothing that they effectively silenced the crowd of half an hour. The end of the performance was met with a wall of noise, almost as though they had somehow reinvigorated everyone listening. 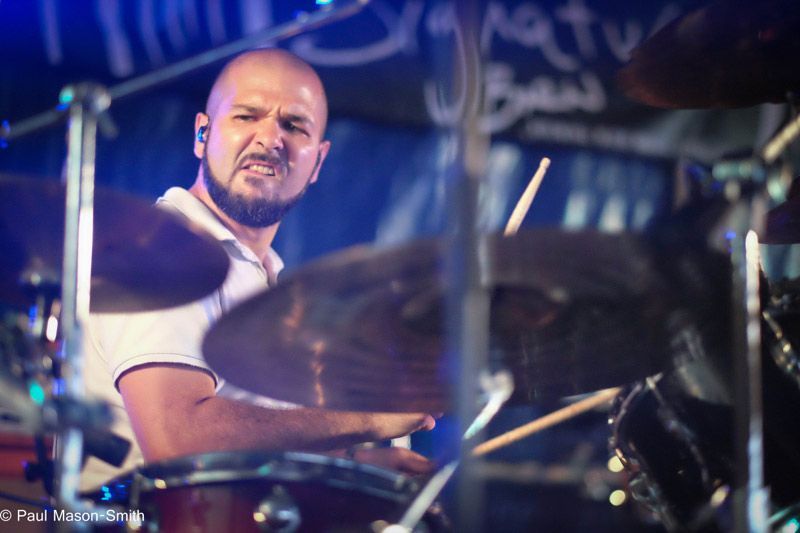 My favorite band of the day was the French duo that is The Algorithm. They play an impressively cohesive genre mash of metal, space rock, techno, and dubstep with a side of sheer lunacy thrown in for good measure. Almost Aphex Twin-esque in nature, this was not dancing music but the kind of experience that truly captivated the audience and made them re-asses their fundamental understanding of what music should be. From electronic drones to blips and clicks the live drums and loops merged seamlessly with the backing track. If you haven’t heard them before, go check them out. It’s surprising that they’re not much better known considering the standard of the music they compose. 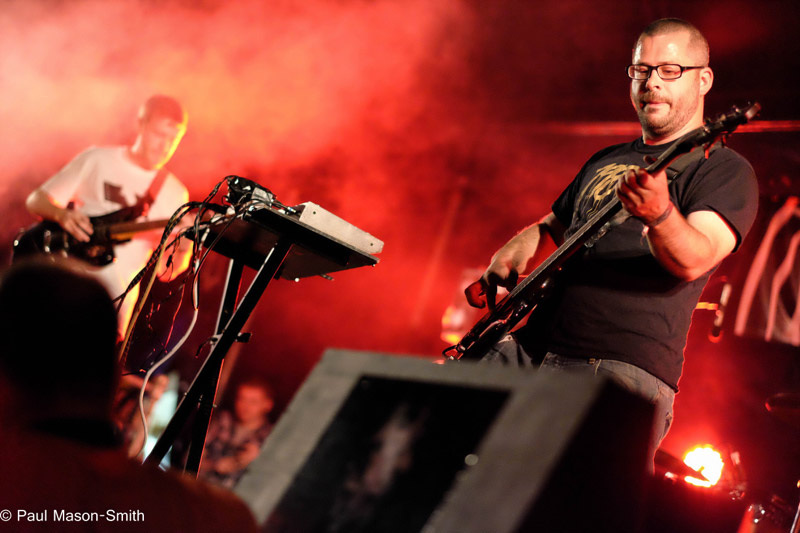 The headlining act on the Bixler Stage was Alright the Captain. Their set consisted of a relentless amalgamation of math-core complete with all the typical time signature massacres that so categorize the genre. The three-piece band from Derby mixed churning riffs and monstrous bass lines interspaced with chunks of retro synth to create a time-warped sense of impending disaster that resonated throughout the tent, crushing the audience. It would have been nice to watch their entire set but unfortunately the end of their performance overlapped with Deafheaven on the Arc Stage and The Cult of Luna in the Yokhai tent. 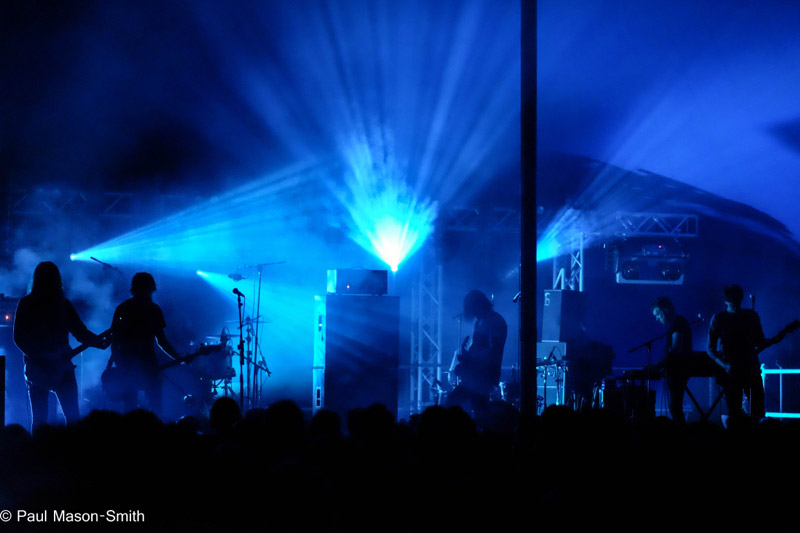 Due to some pretty bad luck, seven-piece Swedish post-metal band The Cult of Luna had their initial flights canceled. They managed to catch later ones but this sent the timings of the entire Saturday into disarray. They were initially meant to be supporting Deafheaven on the Arc Stage but instead ended up playing the headlining slot in the Yokhai Tent. Despite this logistical nightmare, their set was immense; a massive wall of sound blasted everyone listening into oblivion. The encore lasted for over 18 minutes and was probably the climax of the entire festival. When they finally finished the cheers that followed were almost as deafening. The only slight let down was that festivalgoers were forced to choose between them and Deafheaven. 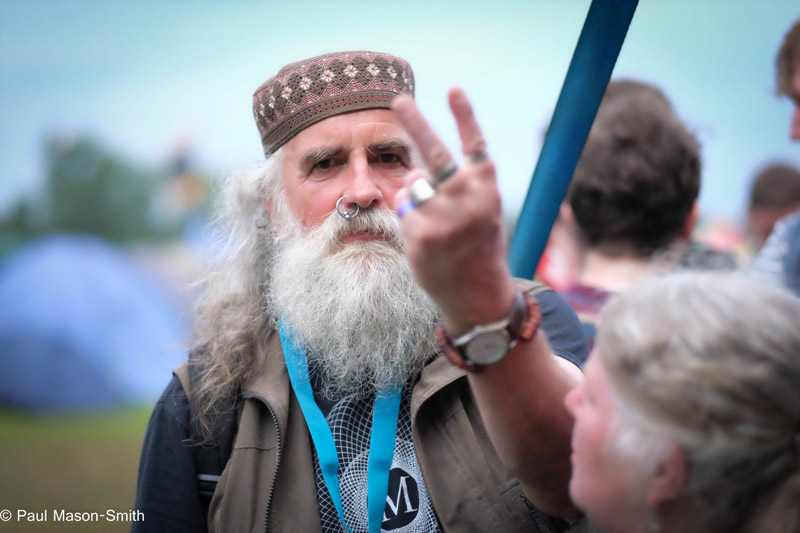 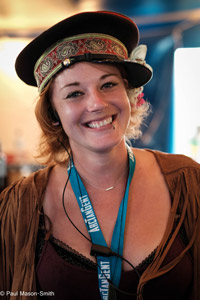 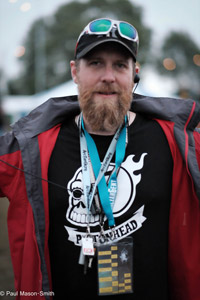 Because ArcTanGent is a relatively small festival, it did not suffer many of the issues that commonly plague larger events. The arenas were kept extremely tidy throughout the weekend and the site was a perfectly accessible size. Each stage could be reached within a brief five-minute walk and the set times were sensibly staggered. Even with several last minute cancelations and the subsequent re-shuffling of acts, the entire weekend went down pretty much without a hitch. We got to talk 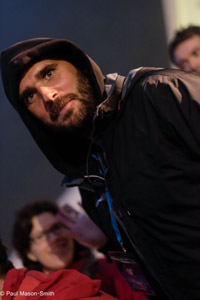 to all three of the organizers, Simon Maltas, James Scarlet and Goc O’Callaghan, at different points throughout the weekend. They were extremely laid back and seemed to take everything in their stride. Math-rock is a relatively small genre in the U.K. and by organizing ArcTanGent they have developed a platform that gives artists whom might otherwise just play DIY gigs a chance to gain exposure. Everybody that we talked to throughout the weekend appreciated this fact and I don’t thing we talked to a single person who didn’t love the event. We hope that this brilliant, unique festival will continue to run for many years to come. 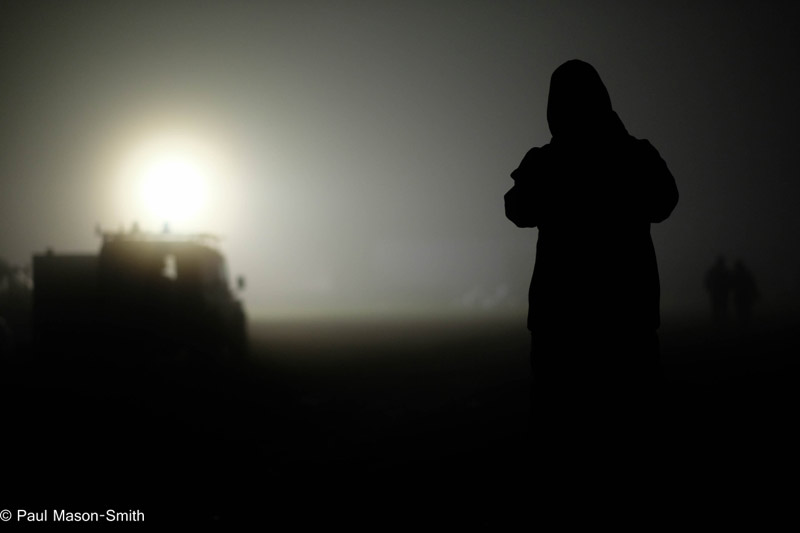