A Ribble runs through it.... 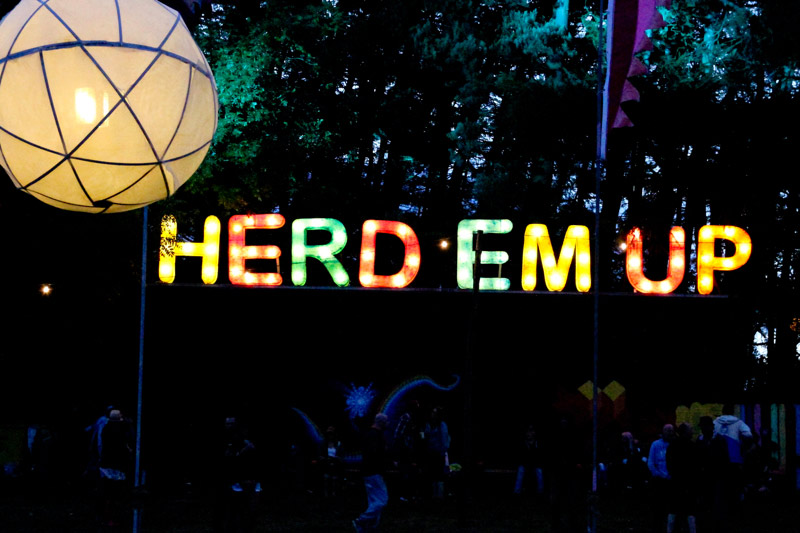 A Ribble runs through it.

Just to be absolutely clear, the Ribble Valley is a real place. I did not make it up. It is not where the forebears of Officer Dibble lived before they crossed the Atlantic to constabulary glory. It’s north of Manchester and south of Scotland, with steep slopes on either side and wide pastures dotted with sheep and old fashioned looking black and white cows like the ones that lived on the toy farm you had when you were a child. It’s one of those places where you drive through it and think – “I should live here.” It’s just about the perfect place to hold a music festival, Beat-Herder, Friday-to-Sunday, July 17th to 19th. 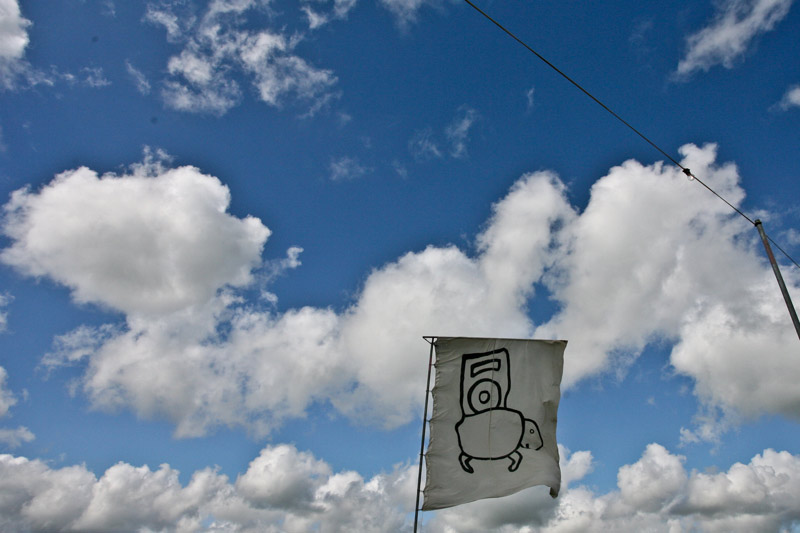 They’re having a traffic festival on the M62 and the fringe event is all the way up the M66 and A56. It’s a hundred and fifty miles from my house to Beat-Herder and it takes me four hours. I spent the last hour in a traffic jam behind a disdainful looking llama. It peered disdainfully at me from the back of its horse box, chewing languidly and weighing up whether or not I am worth the effort of expectoration. It had a way of looking at me as if it had a second pair of eyes situated right up the back of its nostrils. I gazed back, trying not to look intimidated. ‘This is mental,’ I thought. ‘I am in my car in a hard staring competition with a camelid. Beat-Herder will have to go it some to be madder than this…’

But Beat-Herder was madder than a llama, much, much madder.

It was the tenth anniversary of what started out as a rave in the woods for a few friends and all twelve thousand tickets sold out in advance, which is not so surprising because Beat-Herder has acquired a reputation for being one of the best weekends in the festival calendar, a place where you’re always sure to see and hear something new. Impressive stuff considering that they resolutely refuse to accept corporate sponsorship and take pride in staying small but perfectly put together. As you drove up it looked as though it filled the whole valley for miles on either side, but that was because they steered clear of that thing where the festival is just a big field ringed with tents. The site was laid out with considerable cunning, making the most of the natural contours and forestry to maximize the view of the main stage, and to hide other parts from view until you go seeking them out, so it was constantly full of surprises.

There were so many stages and arenas that it was hard to keep track. At the end of three days I still hadn’t found them all. Where were the Scandinavian swimming pool and the underground bar? Maybe I’ll find out next time. 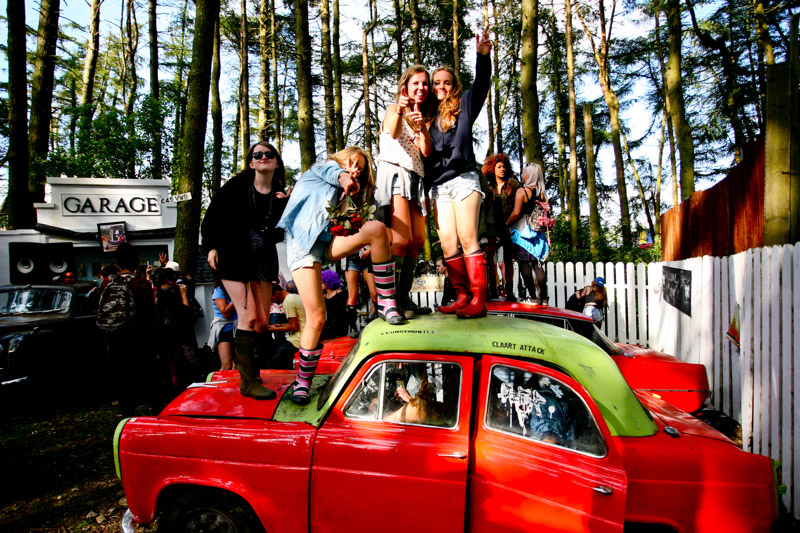 There was a Working Men’s Club with red velvet snug furniture, a doughnut shaped earth ring with huge slabs of ironstone forming henges at the entrance, a corrugated iron eastern fort, guarded by a huge dog foh, and with walls surmounted by fire jets so fierce that I spent thirty minutes taking pictures and came away with half a beard. In the woods there was a stage, surrounded with light boxes that project moving patterns onto tree trunks, buildings and dancers. There was also a manor house, with a stage in its colonnaded entrance that played host to two really rather creepy pole dancing automata. They had all the moves but I will admit to liking my Stepford Wives with a little more meat on them. 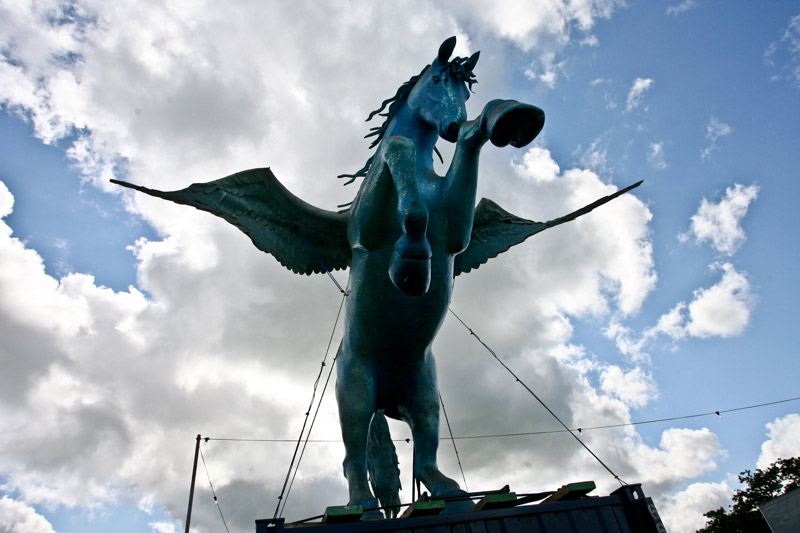 The list could go on forever so I’ll be quick. There was a funfair, a reggae tent, a comedy venue, a place called the Perfumed Garden that is probably neither but I never get there, a church with decks in the pulpit, a tattoo shop, a garage with cars for dancing on, a western bar, a teleport between two sylvan phone boxes (which I suspected was really a tunnel but I am too fat to investigate further), a funfair (did I mention the funfair?) and more street food vendors than you can shake an authentic Tibetan goats meat curry at. 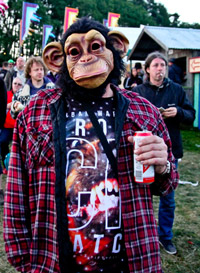 You had to take a wander at night to appreciate the place in it full glory. The forest was hung with illuminated globes, strange waxy colour patterns rotated across the manor, the trees were lit with pulsating circles and squares of light and shadow, the fortress glowed like a huge fire pit. It was a bizarre and magical experience, like falling down the rabbit hole and coming out in a world filled with people whose controls are set permanently to “dance and have good time.” So otherworldly did it seem, it wouldn’t have been entirely surprising to find a team of anthropologists hiding in the trees doing some observational research, or David Attenborough leading a camera crew softly through the undergrowth. It made an hour spent eye-to-nostril with a llama seem like the most natural thing in the world.

There was plenty of fancy dress, of course. The theme for the year was the letter E, which might have been asking for trouble, but there were lots of elephants, Egyptians, elderly people and even a six-person emergency ambulance whose attempts to enter an already packed out circle pit provided one of the most bizarre spectacles of the weekend. There were also a lot of people who either hadn’t got the E message or who couldn’t spell. As I walked past a man wearing black plastic overcoat a woman accosted him and asked loudly, “Why are you here in that attire?” “It’s not a tyre,” he replied, “It’s a rain mac.” 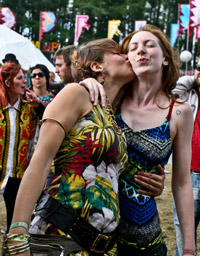 And there was music, of course. Where do we start? Perhaps by saying that what I know about dance music could be engraved in large letters along the side of a perforated eardrum. So don’t expect anything clever here, and I’m not going to attempt any kind of judgment on anybody’s DJing or MCing skills. Suffice it to say that almost every venue that I visited has some thumpingly huge beat filled music banging out, the iron of the fortress rattled like a proverbial door in a storm and the earth circle was packed so tight with moving bodies that it seemed that the crowd had actually blended into a single rhythmic organism. Sometimes the bass was so heavy the whole field seemed to be shaking (yeah, I know, I sound like your granny…), and it imparted a curiously reverberative sensation to the seats of the backstage portaloos, which could possibly catch on, like those clockwork motel beds you see in films.

It seemed only right that Beat-Herder should have had a unique stage and of course it had indeed, being equipped with a large herbaceous border at the front of the apron that adds a whole new level of complexity to shooting music photos, because it was necessary to stalk views of the stage between fronds of lupin and loosestrife, and while the autofocus on the camera went into meltdown as it switched between the performer and the intervening foliage. There was also a smoke machine right at the front that blew huge casts of fog right across the pit, rendering the action all but invisible most of the time. It was like shooting for a jungle warfare documentary and it was noticeable how quickly many of the photographers just gave up on visiting the main stage, which was a shame because there are some great performances there, as we could hear and intermittently see. 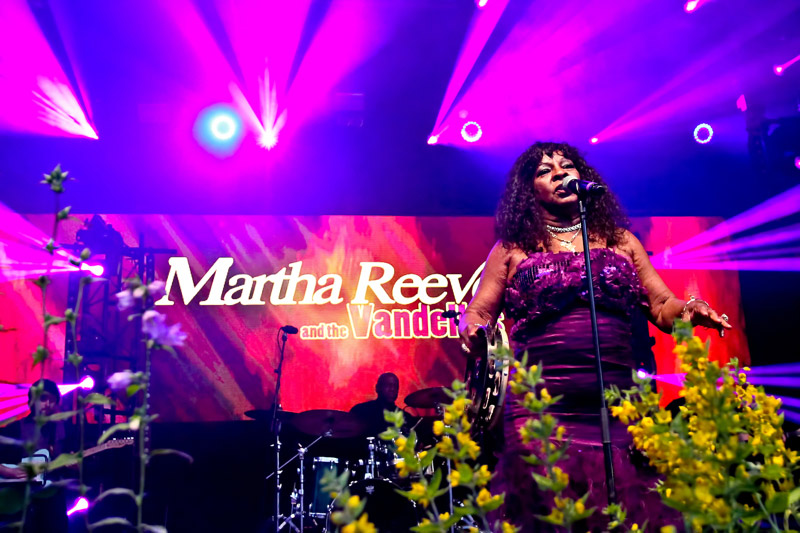 There was so much going on it’s almost impossible to catch whole sets, but I made sure I saw Martha Reeves & The Vandellas’ because, well, because it’s Martha Reeves & The Vandellas. What more reason could you want? She’s still got plenty of vocal power and bucket loads of charisma and she really knew how to play and audience. “I am a mature woman,” she announced, “And I am not leaving this stage until I am good and ready.” Whether anyone was really trying to get her off stage, and why they might have been doing so, remained a mystery, but whatever the background it was pretty clear that the lady was not going anywhere ‘till she was good and ready. Her set was full of hits from the golden age when rock and soul were two sides of the same coin – “Jimmy Mack”, “Live Wire”, “Nowhere To Run” and of course “Dancing In the Street”. Back catalogues don’t get much better than this. 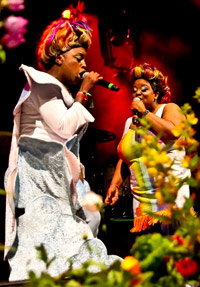 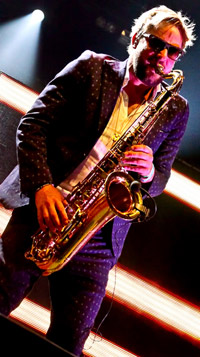 There was plenty of variety on the main stage with Leeds based trip hop outfit Nightmares On Wax showing that they can really do it live on the Friday night prior to a storming set from Basement Jaxx, whose career-spanning set included material from their latest dancing robot inspired offering Junto, although it was old favourites like closer “Bingo Bango” that really got the crowd dancing. Saturday night saw an uproarious show from The Levellers and a fine music and light display from Leftfield, but the main stage highlight of the weekend was Saturday night’s closing set from The Parov Stelar Band, all the way from upper Austria. Stelar is usually credited with inventing the electro-swing genre and it was pretty clear that he is thoroughly steeped in in the jazz and swing music of the 1920s and ‘30s, which he combined with electro beats and effects to astonishing effect. My personal favourite, “Booty Swing”, arrived early but it was a great performance throughout. Elsewhere there were pictures of people dancing while dressed as Scrabble tiles to be taken, but I was happy just sit down and enjoy. 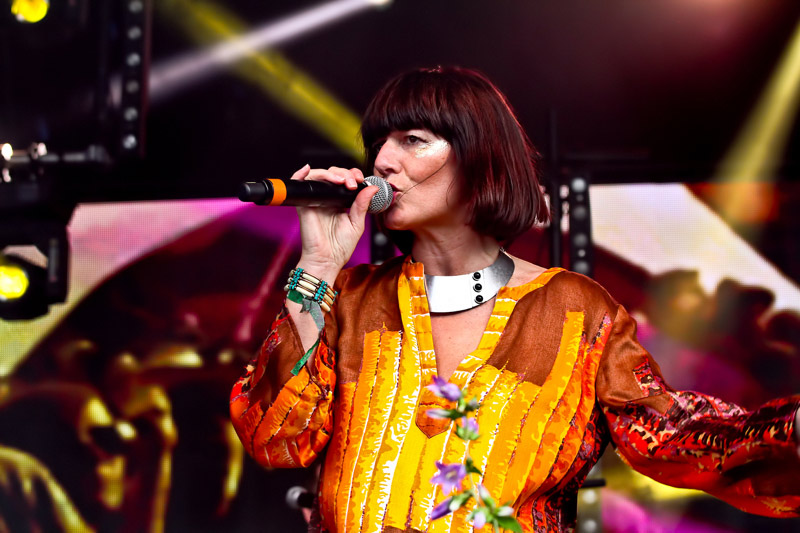 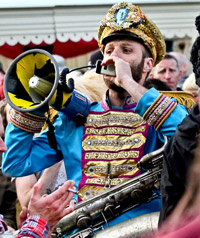 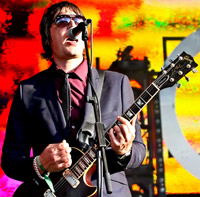 Add in some great dub punk from Dub Pistols, disco house from Crazy P, wry northerness from the Lancashire Hotpots and some soulful funk pop from Grinny Grandad and you should have the idea that there was something for everyone and all of it very good. Away from the main stage my highlights were Mr Wilson’s Second Liners, who combined Dixieland musical stylings and Sergeant Pepper tailoring with all your favourite club classics, Dream Themes whose high kicking, arm punching stadium rock set was comprised entirely of TV theme tunes including Star Trek and The Good Life, and my favourite band of the week, the punky, folky, rockish Faux Foxes. Definitely one to watch out for. 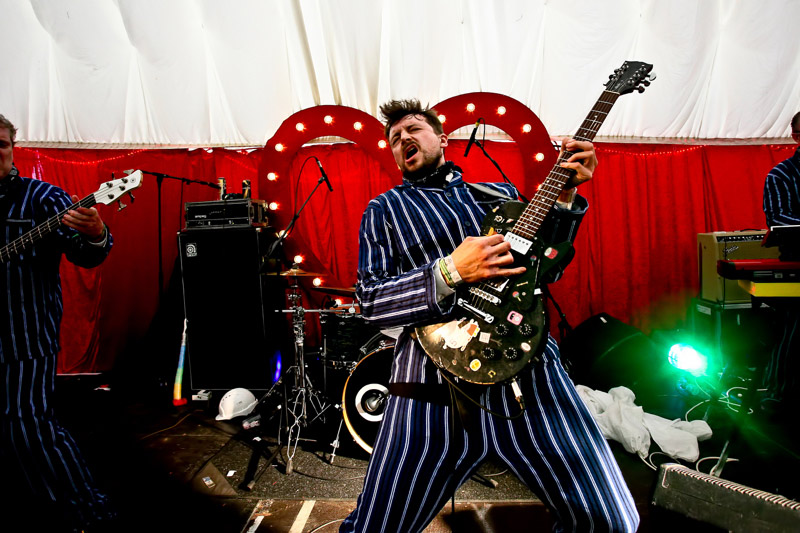 So there you go. If you missed it you missed a weekend of inspired madness and you should try and get there next year when the woods and fields of the Ribble Valley will once again echo to the sound of people staying up well past their bedtimes to enjoy great music in some of the strangest and wildest venues you’ll ever see. You’ve got fifty-one weeks to try and figure out what big surprises are in store. My guess is a guanaco. 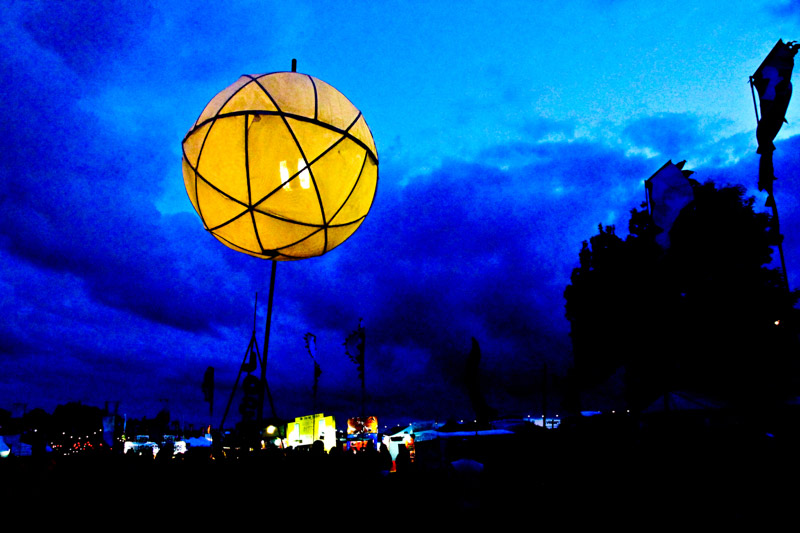