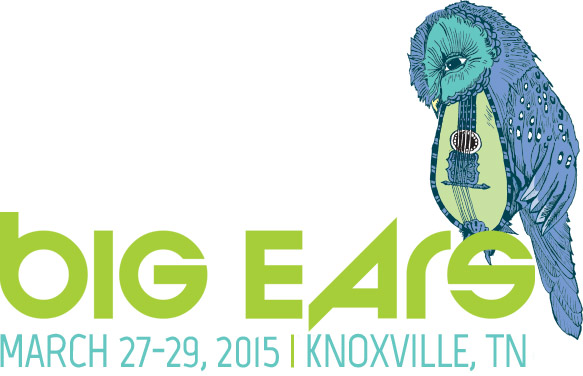 Big Ears offers a broad spectrum of outstanding artists who perform various genres of music in Knoxville’s intimate Bijou Theatre and beautiful Tennessee Theatre over three days, Friday to Sunday, March 27th to 29th. The artist-in-residence this year was the Kronos Quartet, who has a massive history of collaborations along with an extensive history for over 40 years, and even won a Grammy at one point in their career. They arranged to perform with several interesting and unique artists of their choosing. In addition, there were performances set up for the people they collaborated with to have individual sets if they chose to do so. To keep things interesting, a few indie and pop acts as well as world music acts also performed over the weekend. 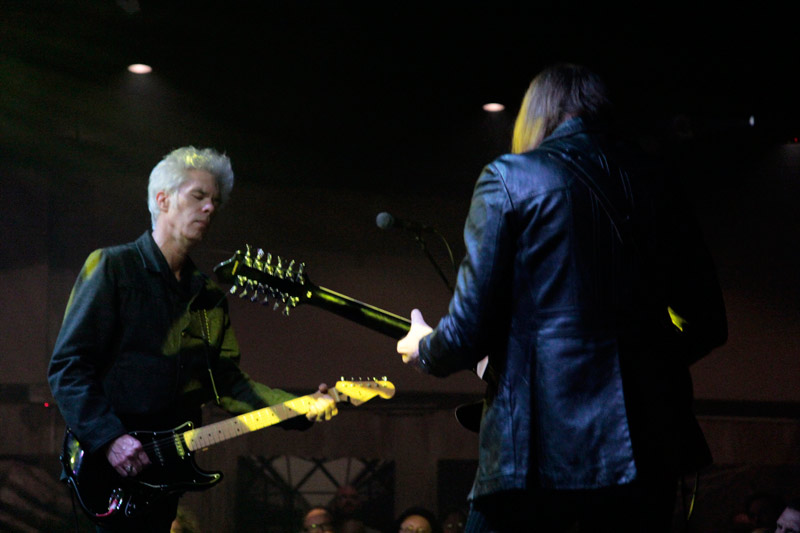 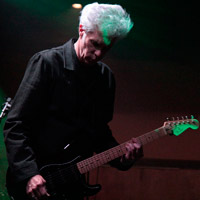 SQÜRL, a rock-based trio with loud amps, played sludgy, sterno-burning tracks with deliberate feedback, filled the Square Room with their unique sound. The intense sounds created a heavy air of mystery in the room. It seemed early in the festival for such a serious band, but hearing SQÜRL’s set was similar to singer-guitarist Jim Jarmusch’s movies, full of unexpected transitions and twists that kept the listener interested. 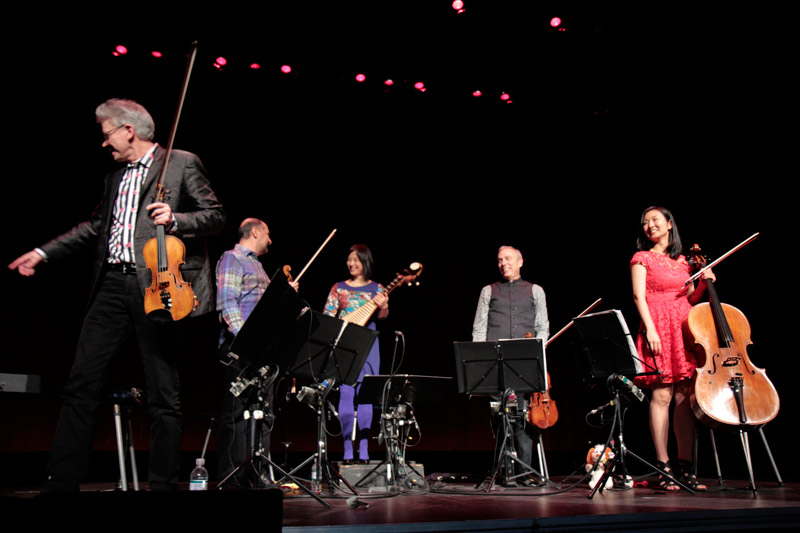 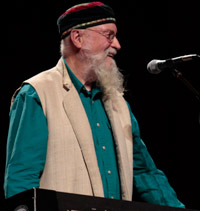 Kronos Quartet joined stuffed animals onstage for “The Music of Terry Riley”. The contemporarily composed music held an ebb and flow dynamic like slow breathing. Wu Man joined them, playing the pipa on “The Cusp of Magic” with speed and precision that added a layer to the already complex sounds Kronos created. Later, composer Terry Riley, writer of several of Kronos’ performed pieces, accompanied Wu Man and Kronos to perform a spoken word piece. Then Laurie Anderson came in on violin to great applause. After she joined in, all of the performers attempted their first ever “Jam in D”, which included interested stories told by Riley and Anderson amongst free-form instrumentals which seemed definitely unrehearsed. 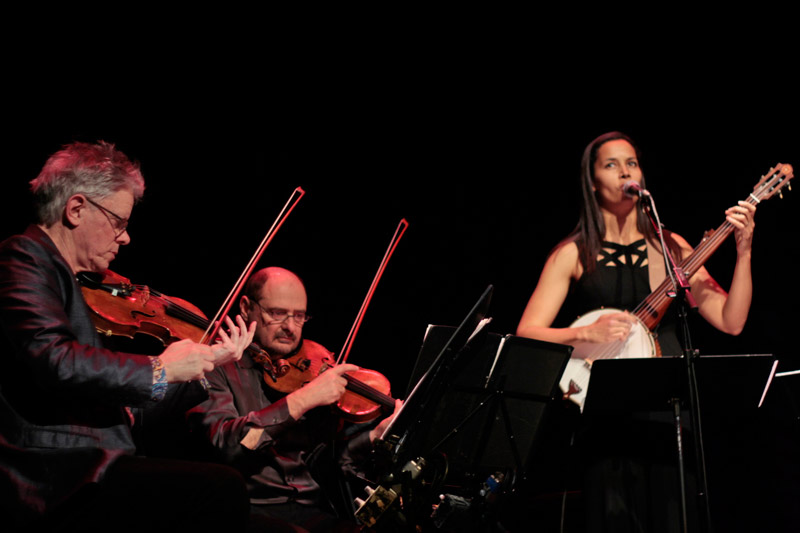 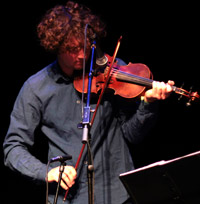 Kronos Quartet’s “Folk Songs” set included folk standards from many worldwide countries, making a nice branch away from the classically based music they played on two violins, viola and cello. They had two guest artists join them, Sam Amidon and Rhiannon Giddens. Sam Amidon performed light, bouncy folk music but some lyrics held a sinister storyline. Amidon alternated playing banjo, acoustic guitar and through during different songs and stood for another. Rhiannon Giddens, with her great vocal command, sung self-written songs that drew a sense of emotion and despair from historical slave writings. To add authenticity, at times, she picked a 19th century recreated banjo. She wrapped up her set with an upbeat Gaelic ditty from a Punch Brothers tune, which Kronos Quartet seemed to enjoy. 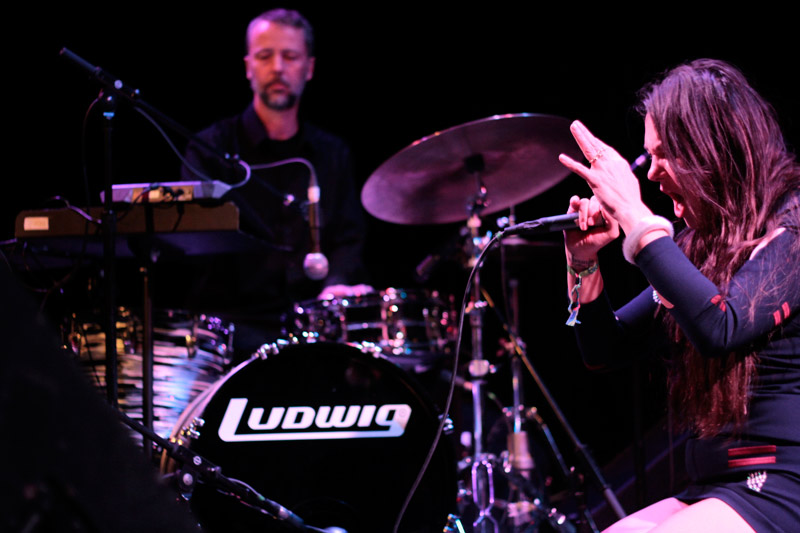 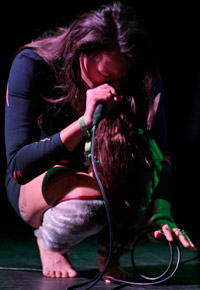 Tanya Tagaq, an Inuit throat singer, advised the audience, “I’m always OK. Don’t be concerned. It’s actually very peaceful what’s going on inside me.” That was wise to mention, because her performance was very intense in nature. She worked herself into a crescendo of breathing, shrieks and growls, with her stage visual a tangle of hair and a mic cord. The theme was based on animism and the collage of animalistic sounds, native dance and Jesse Zubot’s violin shrieks created something close to sensory overload. 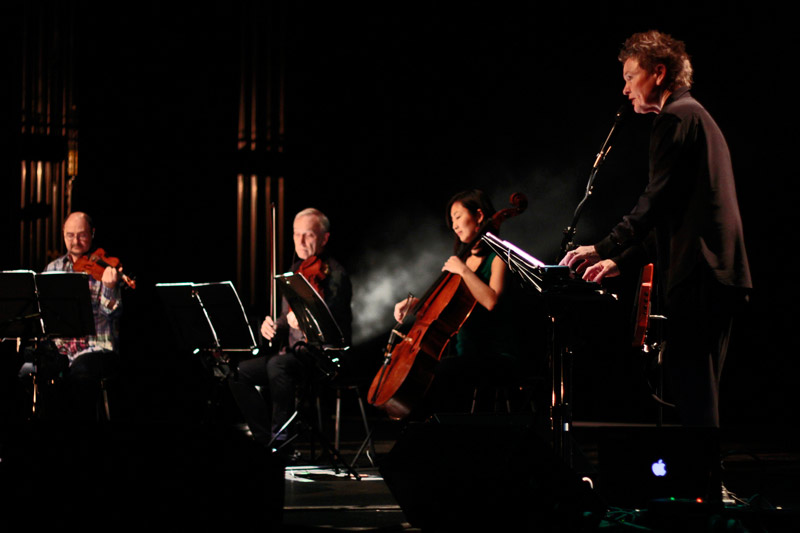 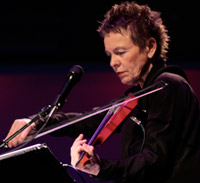 Laurie Anderson joined Kronos Quartet for her performance piece “Landfall”, which included her playing electric violin and computer-operated keyboard. The spoken part of the piece started with her real voice then moved to vocoder, giving her various male, female and non-human voices backed up by colored and occasionally worded backdrops on a large screen. The Big Ears crowd seemed unprepared for the lack of dynamics and the length of the work, and trickled out as time lapsed.

Middle of the Map Fest 2015 Preview