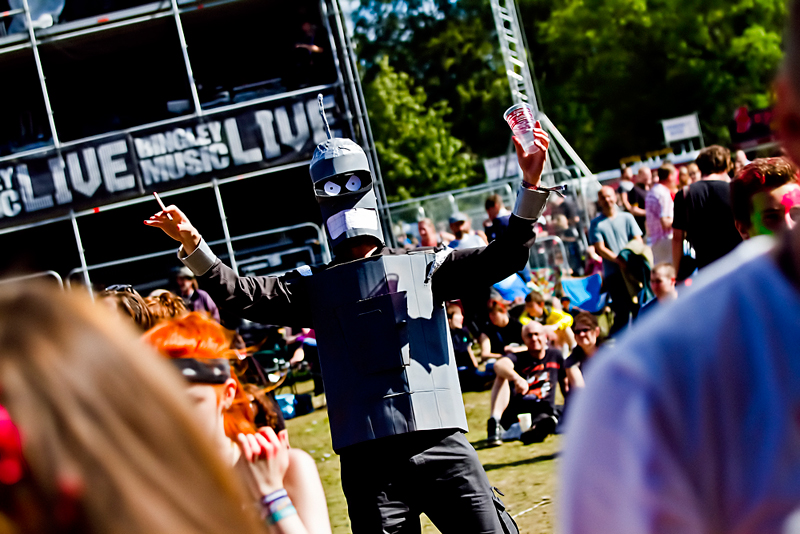 Bingley always seems like an unlikely place to hold a music festival. For those scrabbling for their atlases, it’s on the River Aire, just north of Bradford, with a skyline that bears witness to both its roots as a mill town and its status as the home of the Bradford and Bingley Building Society, whose epic Brutalist head office squats like a brown concrete toad in the town centre. It also boasts a curious tower with a pergola on top, which looks like it could have been the inspiration for the hiding places in Assassin’s Creed. 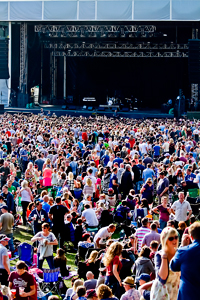 Bingley Music Live, sponsored by Bradford Council and held annually at Myrtle Park, is a proper old-fashioned pop festival that, since 2008, has offered three days (originally two) of quality music at ridiculously good value prices. There are no pretensions to high art here. It isn’t full of bearded hipsters or street performers reciting fragments of Shakespeare at bemused passers by or aging hippies or crazy retro people with staring eyes, it’s just families looking for a great day out listening to music in the company of their children and some warm beer, Friday to Sunday, August 29th to 31st. 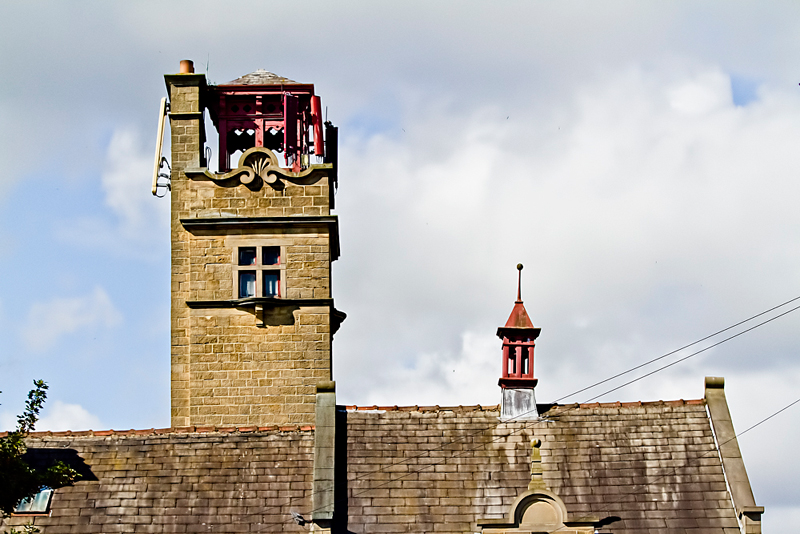 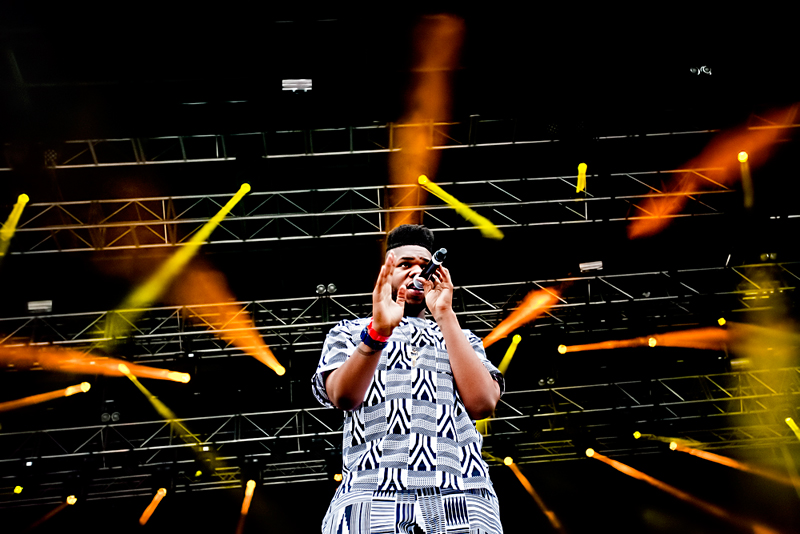 This year’s line up was a little more chart orientated then previously, which meant doing a bit of research in advance (no bad thing for us aging photographers desperately trying to be down with the kids), but the crowds loved it all, or almost all anyway. 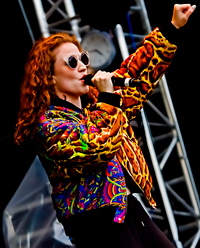 Excellent sets from MNEK, Jess Glynne and Chloe Howl went some way towards dispelling that view although there were outbreaks of clappy, shouty, dancey stuff at other times through the weekend, but I won’t dwell on them. There was a lot of great music on offer and I’ll concentrate on that instead. 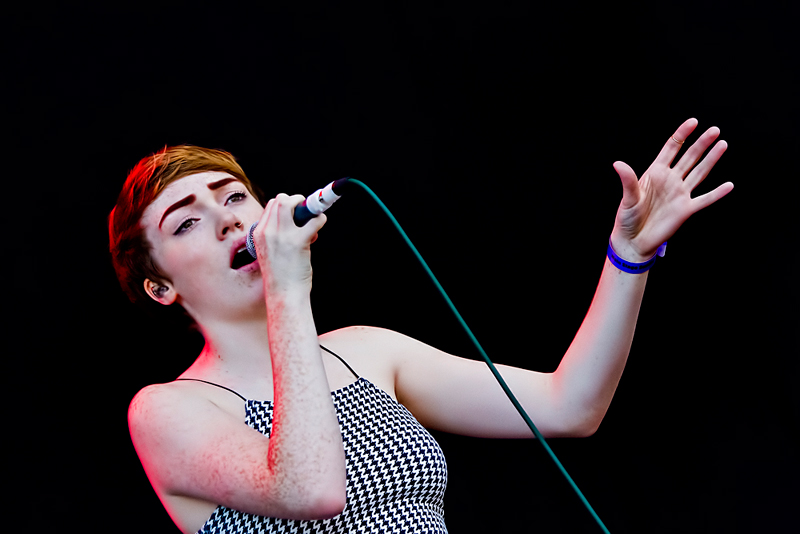 Discoveries of the Weekend 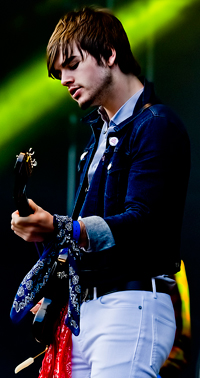 The Strypes have been blazing a trail through the music scene for the past couple of years and gathering reviews so good that I’d started getting a bit suspicious and thinking that they couldn’t possibly be that wonderful, but of course they are that wonderful. I had intended to listen for ten minutes and then go take some photos on the other stage but I didn’t because their reinvented ‘60s rock-pop just grabs you. Judging by the squeals in the crowd it works on girls, too. It doesn’t matter who you say they remind you of because they’ve clearly done their homework and they sound like a whole generation, but it’s between The Who and The Beatles and Bo Diddley and The Yardbirds and all the rest. Hailing from Cavan in Northern Ireland, they are simply ridiculously good and they’re all younger than my car. 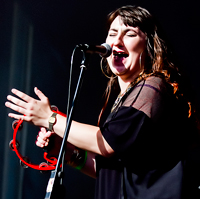 Less well known as yet but equally good was Emma Garrett and her band on the top stage. In a fortnight when I have spent hours listening to my Kate Bush albums and seen St Vincent live in Leeds (QRO review), the last thing I expected on the small stage at Bingley was a female vocal that threatened to make them other two seem just a little bit ordinary. Garrett has been compared to the aforementioned singers, Florence Welch (of Florence & The Machine), and lots of others, and she can mix rock, soul, jazz and folk into one song with just a hint of musical theatre showmanship and it sounds just perfect. Check out her SoundCloud immediately.

And an outside pick. It’s not often anyone gets booed at Bingley but Etta Bond appeared to misjudge what was required from her at a family festival, and delivered a set loaded with sexual detail and other varieties of bad language and the crowd hated her and let her know about it. That’s Yorkshire for ya. Her performance and on stage demeanour didn’t do her any favours either – whether it was the fault of the sound system or whatever she sounded as flat as a pancake. Since getting home I’ve spent a couple of hours listening to her stuff and she’s a talented writer and performer who I’ve no doubt we’ll hear more of in future, and in fairness to her the booking people might have figured out that a woman who tweets as C.U.N.T. is probably not going to go down well with the mums and dads. 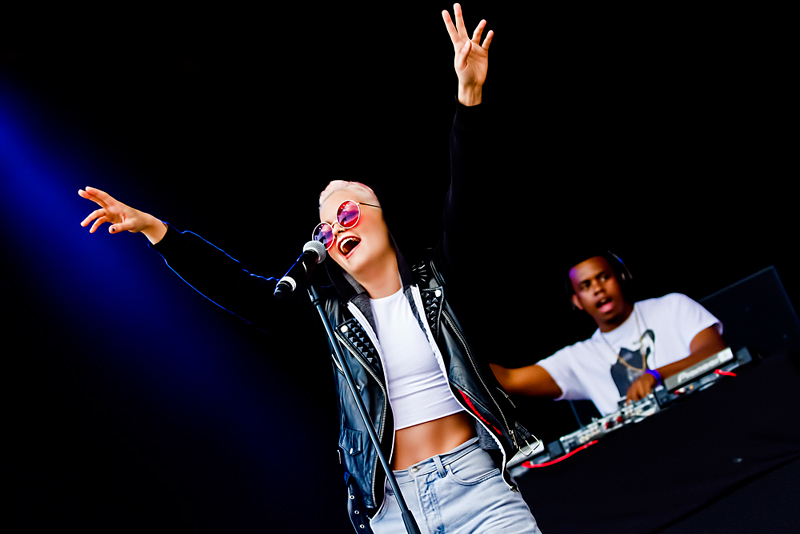 Old Friends of the Weekend

Not ‘friends’ in the sense that I’ve been round their house for tea or anything, but among the bands that I was already familiar with there were two standouts. 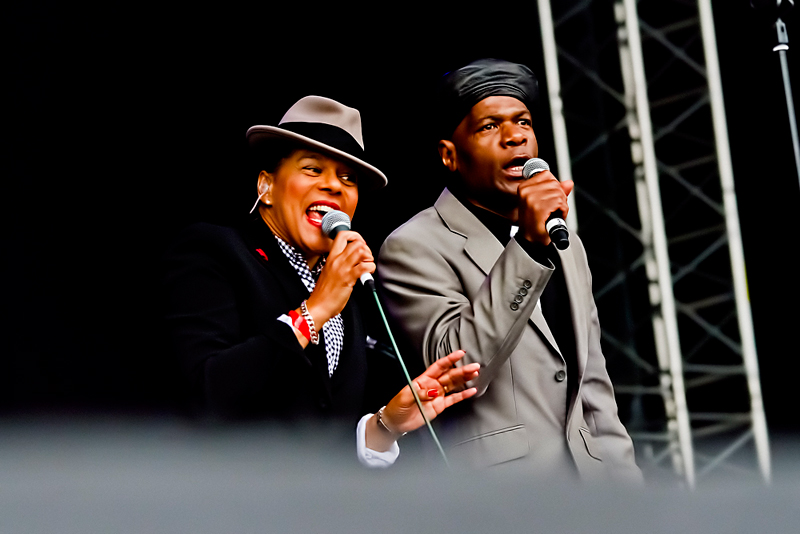 Firstly The Selecter who, legal difficulties with rivals having been dealt with, are now entitled to use that name. They have original vocalists Pauline Black and Arthur Gaps Hendrickson and they delivered a set that sounded streetwise and energetic, as if it was a teenage tribute band and not the real thing at all, finishing with “On My Radio” and “Too Much Pressure”/“Pressure Drop” – one of the major highlights of the weekend. 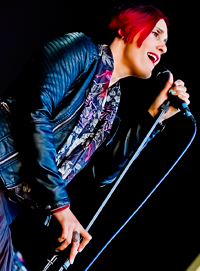 As were the opening songs of the set by The South. It’s no secret that I have a fondness for elegantly witty pop and at their best The Beautiful South could deliver that in spades. They are now fronted by Alison Wheeler and Dave Hemingway and I had everything planned so I could catch the whole of their set, but difficulties with the sound meant that I only got the first few songs (which sounded wonderful). They’re on tour this autumn, however, so watch this space. 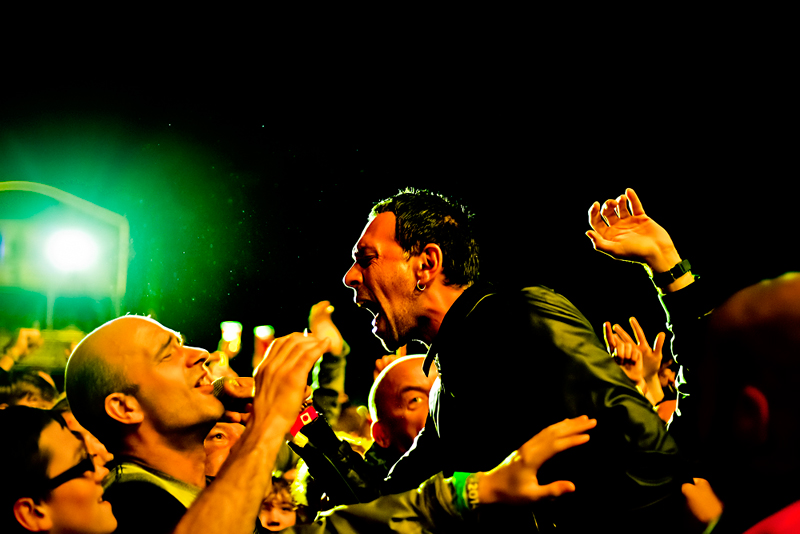 Friday night saw Shed Seven make the journey all the way from York for a set of their greatest hits, which served to remind us that even if the whole Britpop thing is now seen as a cultural disaster on an epic scale, there were good bands around at the time that never quite got the recognition they deserved. Shed Seven were a lot smarter than some of their more illustrious contemporaries, and the dry wit of frontman Rick Witters was much in evidence during their set. They also played the most energetic set of the weekend, and no sooner had they taken the stage than Witters’ natural exuberance saw him almost disappear into the crowd over the barriers. Their set featured classics like “Dolphin”, “Disco Down” and “Rainbows” as well as a storming cover of “Born To Run”, a song by former rock god and now Butlin’s redcoat Bruce Springsteen. 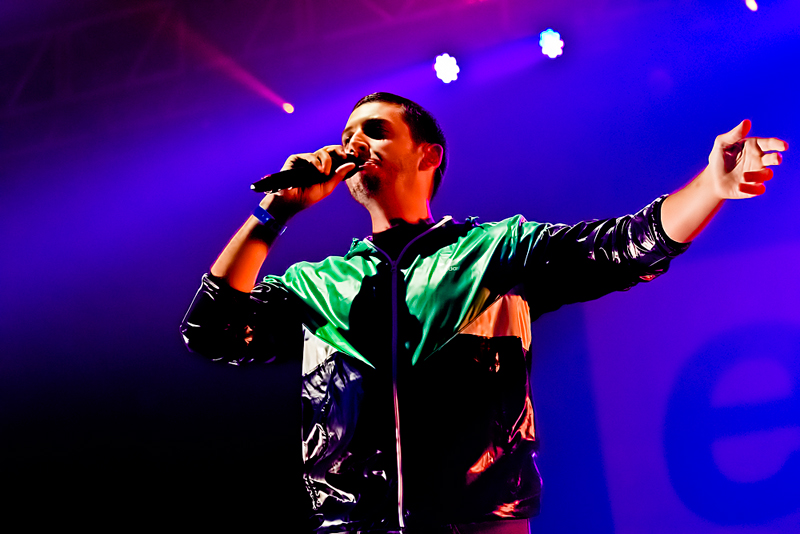 It was the turn of R’n’B to take centre stage on Saturday with Example heading the bill. There’s not much point in me pretending to comment on his set except to say that the multitude loved it, there was lots of audience participation – “Come on now Bingley make some noise, jump, clap” – and it culminated in a spectacular light show. 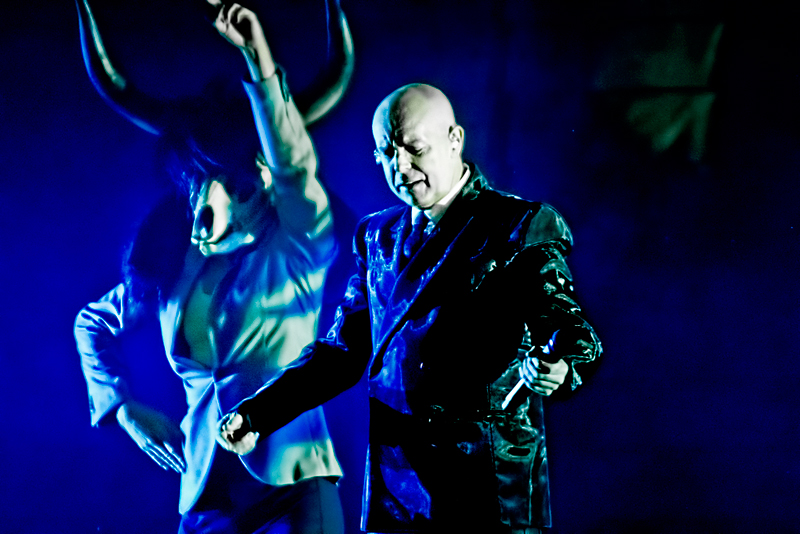 Rounding off the weekend were Sunday night’s headliners The Pet Shop Boys, who brought their ‘Electric World Tour’ show to the Bingley stage, complete with spectacular lights, a whole stage projection screen, dancing orange minotaurs (my favourite flavour of minotaur as it happens), massive feathered power shoulders, projection beds (really), and more pizazz and razzamatazz than you can shake the z key on your keyboard at. It was a show that walked the finest of lines between superlative showmanship and embarrassing nonsense, and always stayed exactly on the right side. If any greatest hits were missing I didn’t notice and nobody seemed to care, and the explosion of confetti that accompanied “It’s a Sin” brought the festival to a fittingly spectacular close. 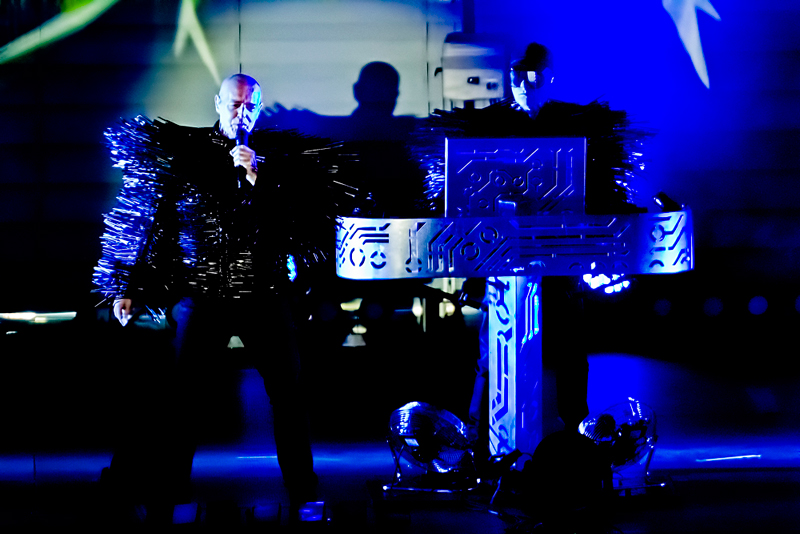 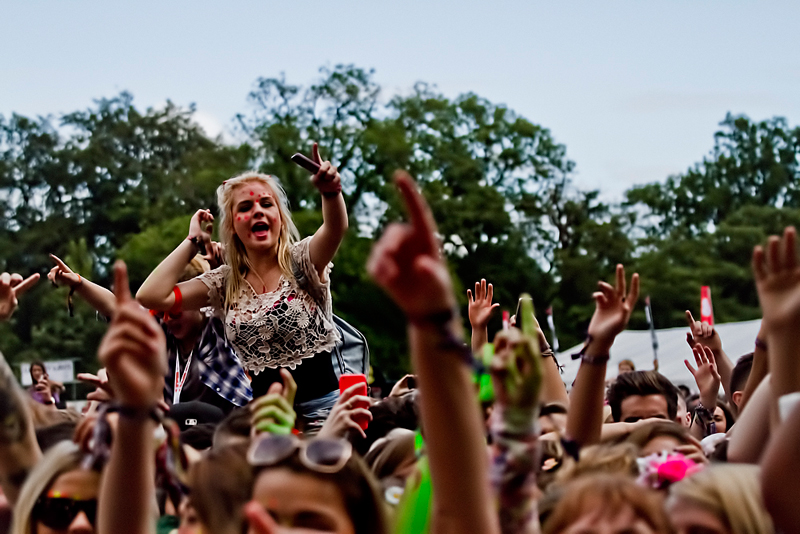