Funny things, festivals. Are they about the music or the event? Or the food? Or the whole kit and caboodle rolled into one?... 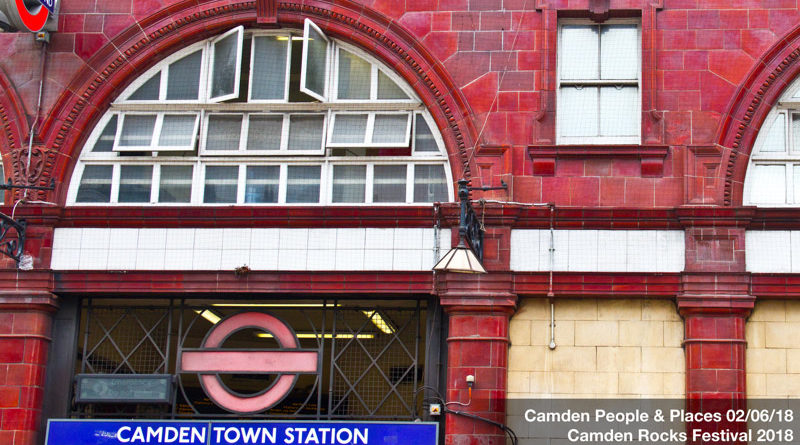 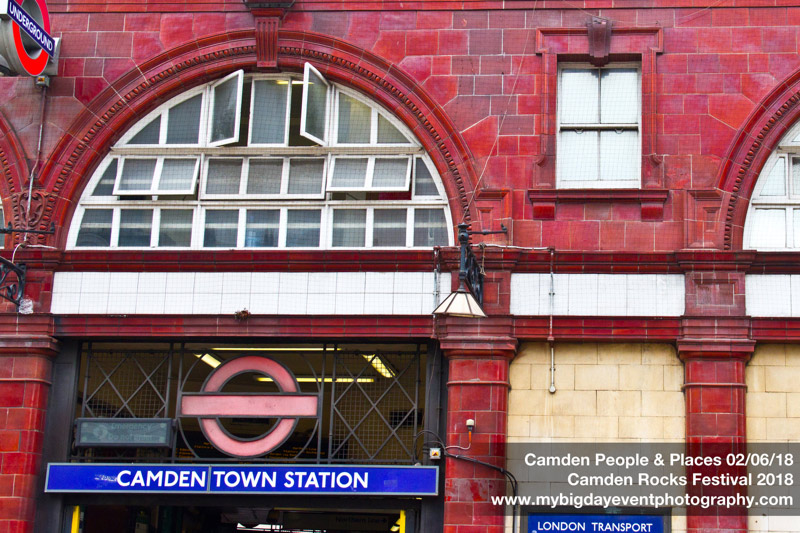 Funny things, festivals. Are they about the music or the event? Or the food? Or the whole kit and caboodle rolled into one?

Not just rhetorical questions, because they affect everything that happens on festival day. What should a good reviewer be looking for? In the first place there are the multiple stages to cover, bands that overlap, and however carefully you lay a plan to maximize your time in the pit, as soon as one band runs ten minutes over their allotted time it’s all gone out the window. Two stages are just about manageable. Three or four stages and you have to miss big chunks of the programme. Camden Rocks, which came to the Camden area of London on Saturday, June 2nd, has twenty-two stages to choose from, ranging from the classic rock and roll halls like Dingwalls and Koko to pubs and cafés. 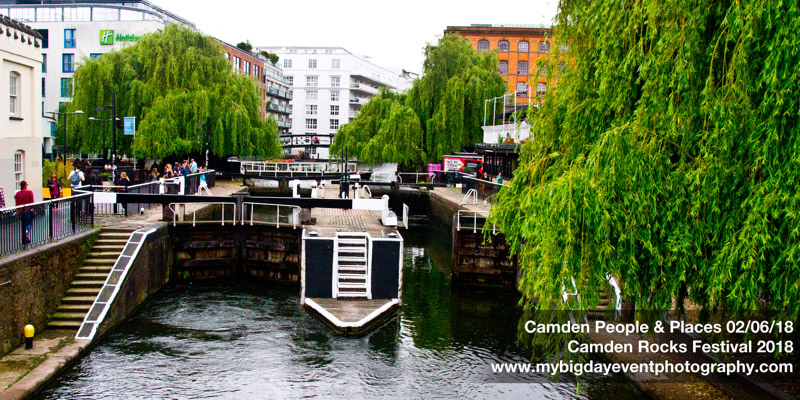 What makes Camden even trickier than any old 22 stage festival is that it’s not just about the music, or the event – it’s about Camden itself, the canal and the market and the Aesculapian snakes (they escaped from London Zoo and colonized the canal area years ago, and every time I’m in the area I go looking for them, but I’ve never seen one yet) and the Roundhouse (even if it’s not a festival venue, it still dominates the Chalk Farm end of the festival area), and the pubs and the fancy dress punks who ply their trade on the bridge. 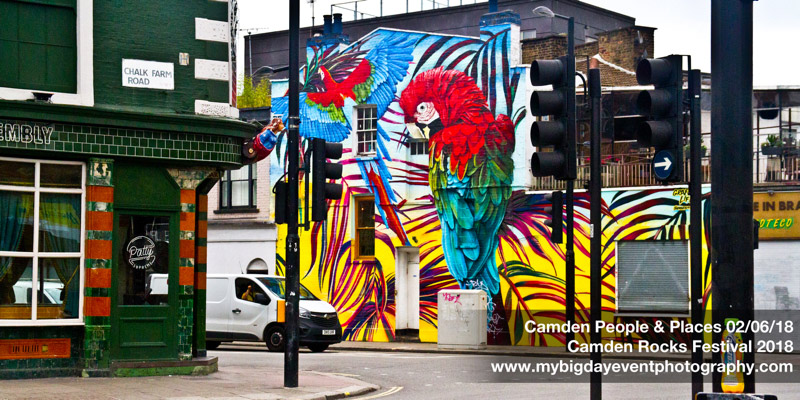 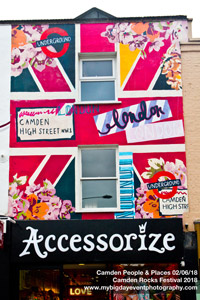 Then there are the psychedelic shop fronts, the locks and canal boats, and, of course, the street art, both official and unofficial. There’s even a witless Banksy or two. If you stand still too long in Camden, there’s a good chance someone will paint over you, and standing is frequently the only option you have because, unless you’re eating at a restaurant or a café, there is almost nowhere to sit. By late afternoon my poor old dogs were barking a treat.

Camden lays claim to being the music capital of the U.K., and it’s hard to argue. Manchester and Liverpool have had their moments, but everybody and everyone pass through Camden at some point. Just look at some of those 22 venues a little closer. 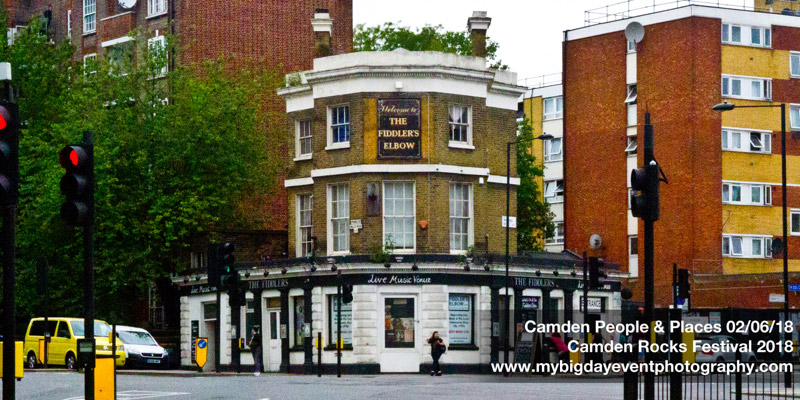 There’s Koko, at Mornington Crescent, the southern extremity of the festival, founded in the 1870s by Ellen Terry, home to Charlie Chaplin and others and, having become a music venue in the late 1940s, the base from which the BBC broadcast the Stones in the 60s. As The Music Machine in the 70s it was the North London Punk Central, site of legendary gigs by The Pistols and The Clash and in the 80s it changed its name again, becoming The Camden Palace, spiritual home of the New Romantics and the venue for Madonna’s U.K. debut. 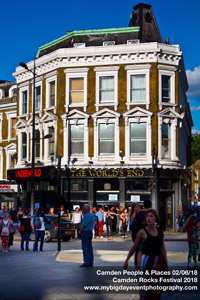 Or The Dublin Castle on Parkway where Amy Winehouse pulled pints, Madness began their careers, and The Killers and the Arctic Monkeys made their first impact on the London scene, and Dingwalls, legendary home of punk that has seen the almost everyone who’s anyone performing there – from Paul McCartney to The Clash (who shot the cover photo for their first album on the nearby stairs in Camden Market).

And the list goes on. Plus of course there’s the market, home to a much visited statue of Saint Amy as Wilma Flintstone, and more great street food than you can shake a stick at, and even if it has all got a bit corporate, there’s still enough craft and gimcrackery around to make it fun. 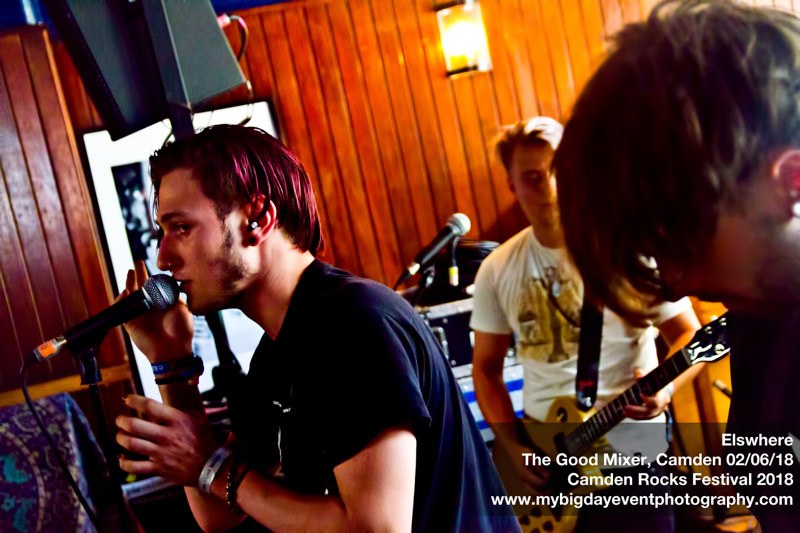 In the event the festival ran with military precision, with each band getting half an hour and then half an hour for clearing up and getting the next lot on – which meant that at any given moment, there were eleven gigs happening, so hard choices had to be made. The early afternoon featured plenty of up and coming bands, and I caught some excellent indie sets at The Good Mixer with Elswhere, The Fiddler’s Elbow with Lighthouse and at Dingwalls Canalside with Dame Jean, who reminded me a little of early R.E.M., which in my house is considered to be no bad thing. 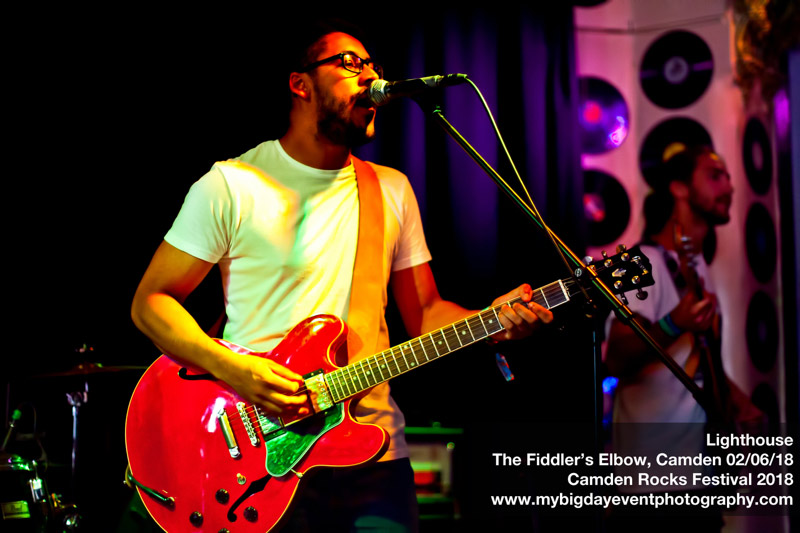 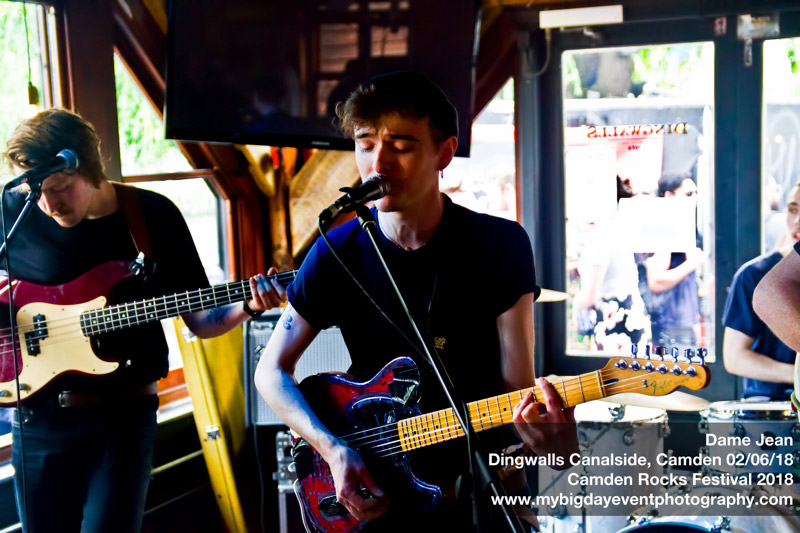 Down in the Dingwalls Canalside was The Soap Girls, dressed only in some graffiti, a guitar, a feather boa and a butterfly headdress (each), keeping the crowds happy with their mix of abrasive banter and catchy, riff driven grunge. They’re on their way to my hometown later this month, and I’m hoping to catch their full set at The Yardbirds. 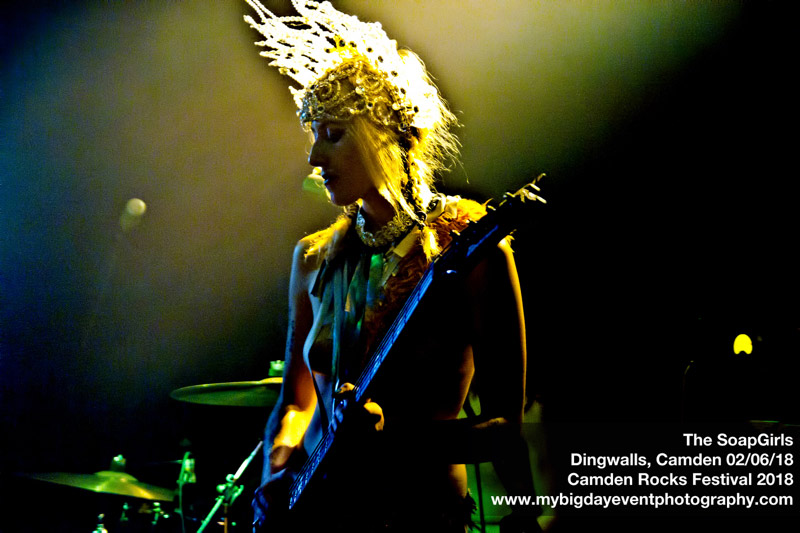 On the subject of the Yardbirds, I ended up parked next to a large blue van containing Hands Off Gretel, who I last saw at that august venue. Described by no less a wordsmith than Ged Babey on Louder Than War as, “A Technicolor grunge, angst-rocker, sex-punk death-rock, emo-pop band from South Yorkshire,” and I can’t do better than that, although I think their geographic diversity may have increased following some recent line-up changes. They’ve been championed by no less an authority than Paul Cook and have been supporting the newly renovated Professionals. 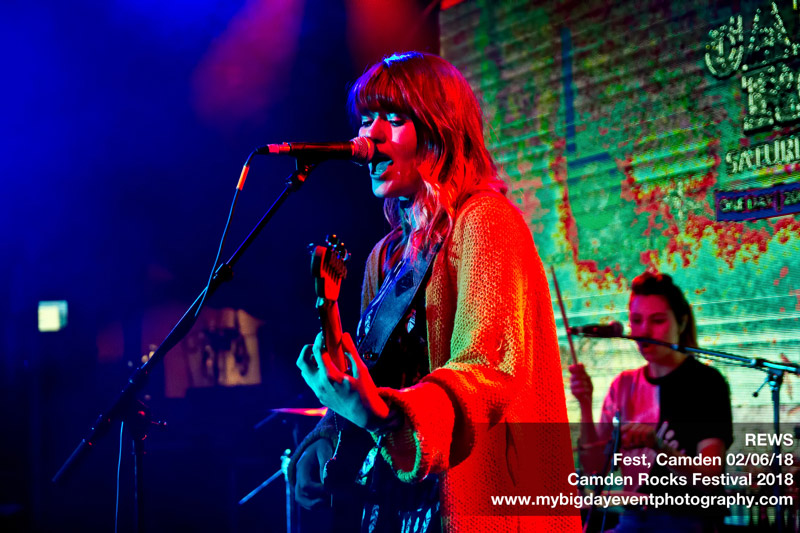 I caught Hands Off Gretel’s set and also Rews, whose brand of infectiously hooky high energy alt rock is new to me (and I’ll be keeping an eye open for them if they brave to cold of the north any time soon), beneath the massed surf boards at Fest, which was packed out for both, and stopped into The Monarch for Alvarez Kings, who conjured up some of the best South Yorkshire indie you’ll hear in a long time. They’re off on an extended U.S. tour soon, which is just reward for their excellence and a work ethic which has seen them become a growing force on both sides of the Atlantic. 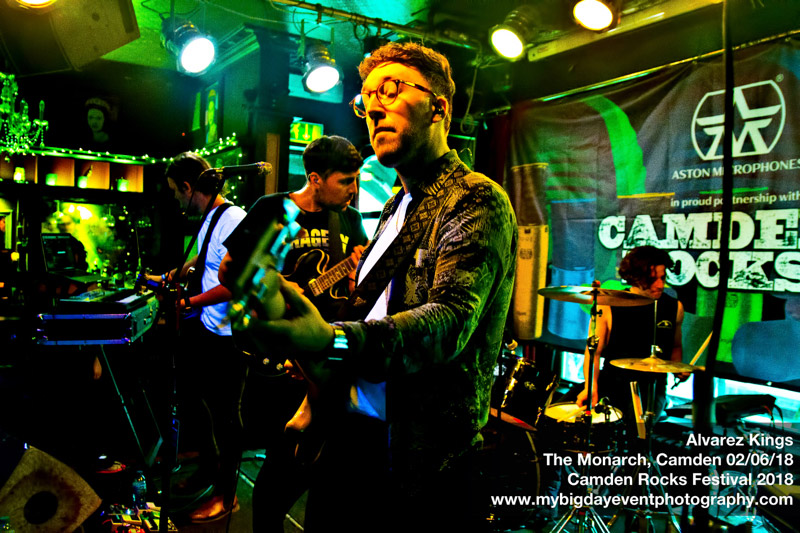 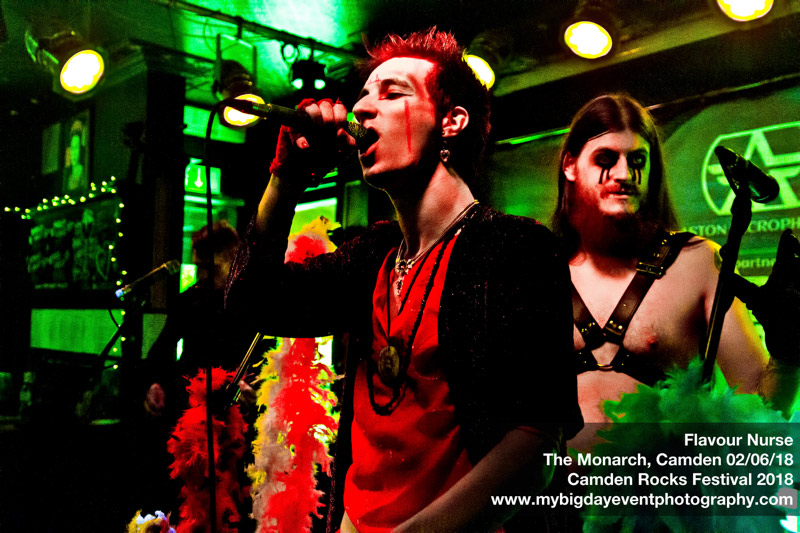 The prize for the most photogenic band of the day went to Flavour Nurse at The Monarch, who combined classic glam with psych and alt-rock to create a potent mix that serves, as they say on their website, as, “Musical medicine for a diseased world.” In the absence of clinically accepted double-blind trials, I’m going to go with that they sounded great, a perfect blend of ‘70s glam and contemporary indie, with just the right balance between archness and irony. Whatever you call what they do, it’s exciting and wonderful, and it is a tribute to their metabolisms that they are able to put on a show that belongs after midnight at eleven in the morning. They’re from Watford by the way, but we won’t hold that against them, and they’re definitely ones to watch. 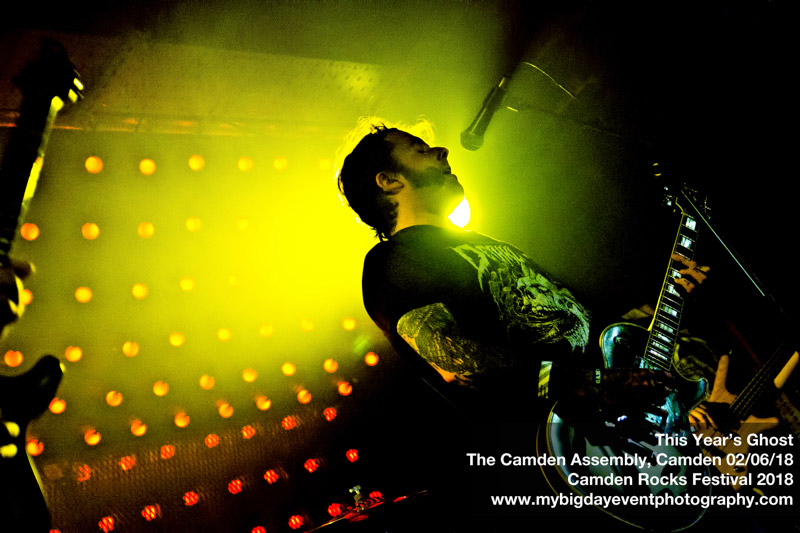 Highlight of the day was a close run thing between This Year’s Ghost, who blasted out a deeply reverberative set of fierce grunge at The Camden Assembly that had the whole building buzzing. Think Alter Bridge and Pearl Jam with a touch of The Deftones thrown in for good measure, making for some seriously nasty in-your-face-ness. 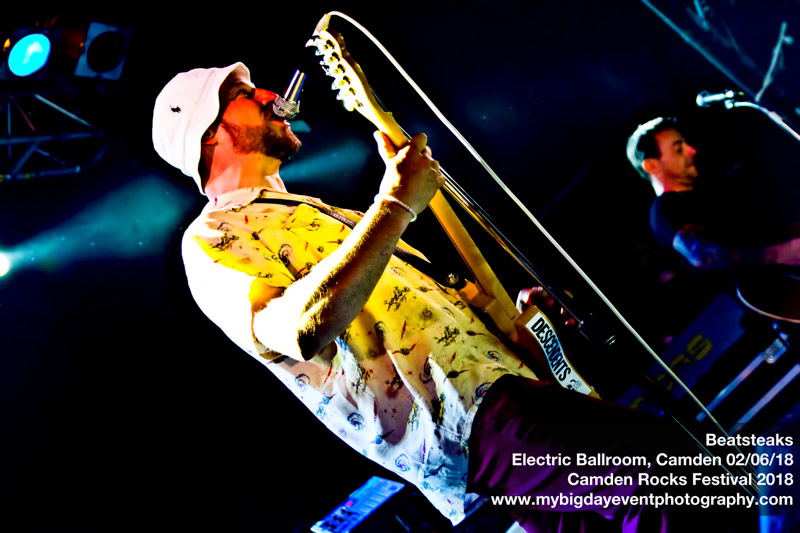 Second contenders were Beatsteaks who, despite having possibly the worst band name ever, managed to feature punk and rock and soul and some distinctly ‘70s cheese pop, and frequently did it all at the same time as well as exhibiting considerable football skills and a happy knack for front row bothering. 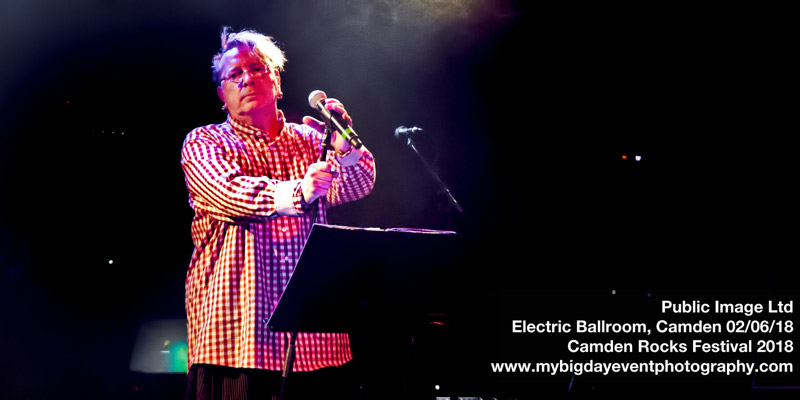 When it comes to the final choice of the day – Twin Atlantic and Maxïmo Park at Koko, Sikth at Underworld, British Sea Power at somewhere else, I went for Public Image LTD at the Electric Ballroom, and possibly the only disappointment of the day. Not because they’re not excellent, Johnny Lydon/Rotten is on great form, trilling and chirping his way through his set, but because only ten togs get into the pit so the day ended with some disappointing photos.

Next year Camden Rocks becomes a two-dayer, and I for one will be putting in an application for what is definitely establishing itself as one of the best events of the year. 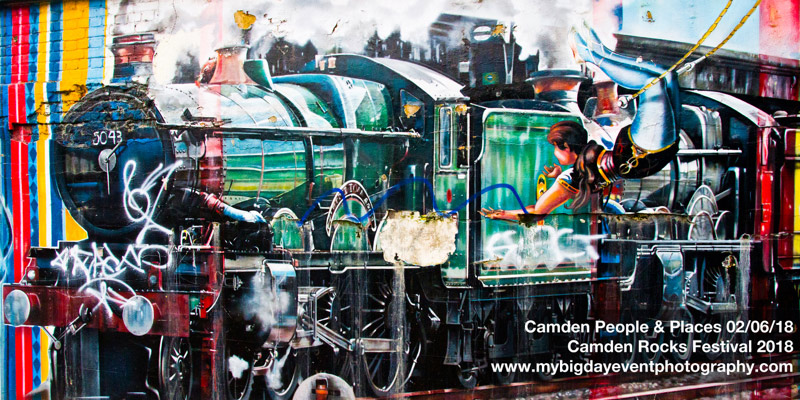