The Disco Biscuits' Camp Bisco returned for another year....

Click here for photos of festival sights from Day One of 2013 Camp Bisco in Mariaville, NY in the QRO Concert Photo Gallery

Click here for photos of festival sights from Day Two of 2013 Camp Bisco in Mariaville, NY in the QRO Concert Photo Gallery

Click here for photos of festival sights from Day Three of 2013 Camp Bisco in Mariaville, NY in the QRO Concert Photo Gallery

If you happen to mention Camp Bisco to folks who’ve never been, you’ll get a whole lot of mixed reactions like:

And while they won’t be entirely wrong, attendees will assure you that Camp Bisco is definitely greater than a handful of wary assumptions.

Bisco originally started out as a festival mainly dedicated to the Disco Biscuits, a jam band with a lively, devoted fan base.  Now in its 12th year in running, it’s a full-fledged music festival with an extensive lineup attracting hundreds and thousands of fans along the east coast.

Things started off a bit shaky with the changes this year; it took longer to get around the festival area with the heighted security, and a lot of people had to adjust to the re-organized layout of the grounds (congratulations to those who found the Silent Disco on your own).  The torrent of rain that came on Wednesday didn’t help either.  But despite these small setbacks Bisco carried on, as always, for an incredible weekend of endless music and unforgettable experiences. 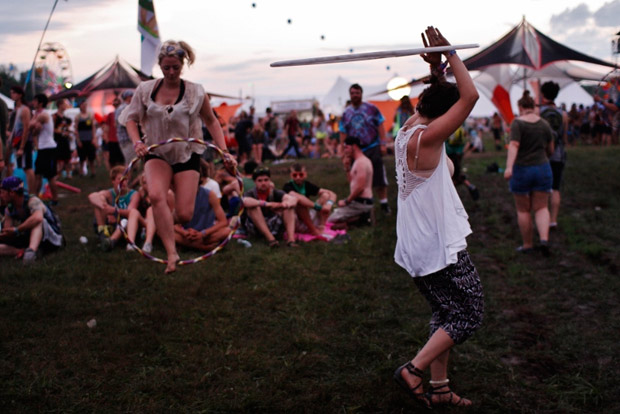 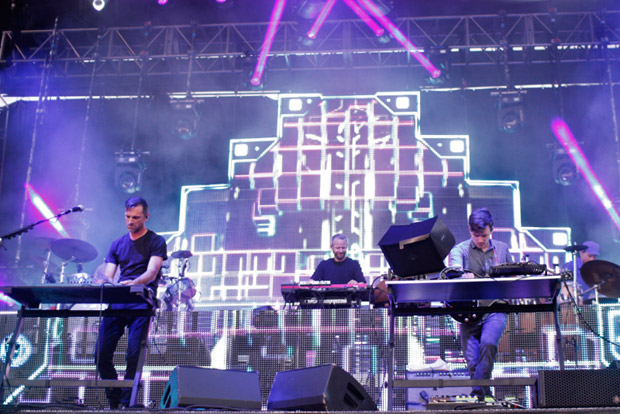 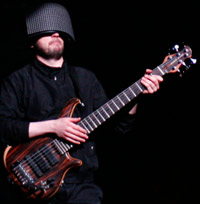 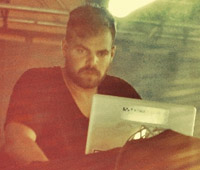 The multi-genre experimental band STS9 brought an exciting transition from day to night on Thursday with their fluid electronic rhythms and fantastic visuals to match.  Dark clouds were still lingering from the storm on Wednesday and the ground was still soft with mud, but no one really cared.  If anything, the Bisco crowd was raging even harder as a big “Fuck you” to anything that came in the way of the positive festival vibe.  After the Disco Biscuits’ first performance of the festival, late night sets kicked in.  Ravers were spilling out of the sides of the B.I.G tent for Dillon Francis’ chaotic moombathon, but the air seemed much more breathable with Com Truise in the adjacent Label Tent.  The warped, galactic sounds accompanied with live drums suited well for those who wanted something fluid to wrap their minds around.  After, iconic electronic artist Squarepusher (Tom Jenkinson) threw on what was arguably the best set of the night.  Complete with a badass helmet and visual panel, Jenkinson brewed his schizoid beats, stepping out of his booth at one point to compliment his set with a live bass guitar. 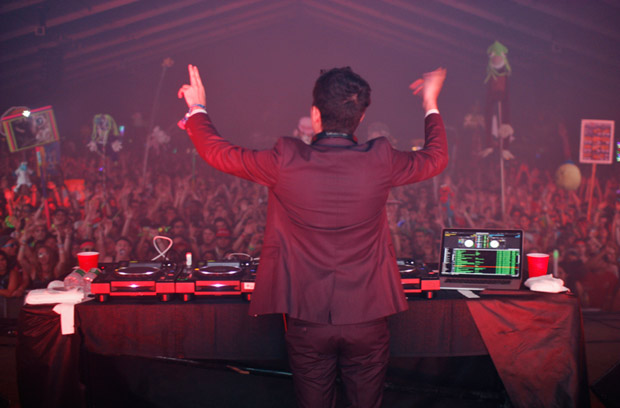 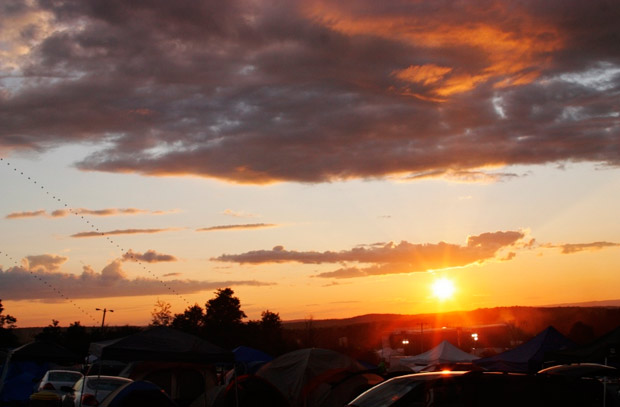 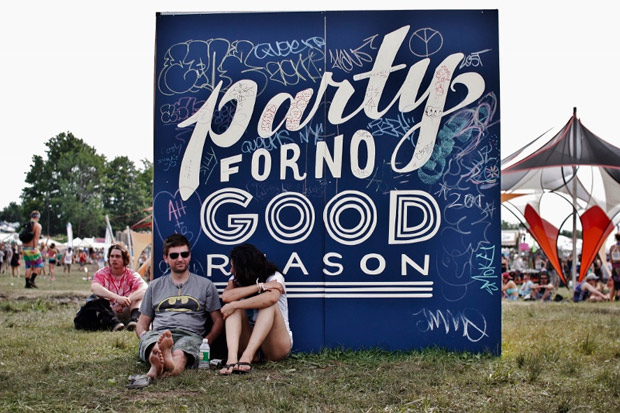 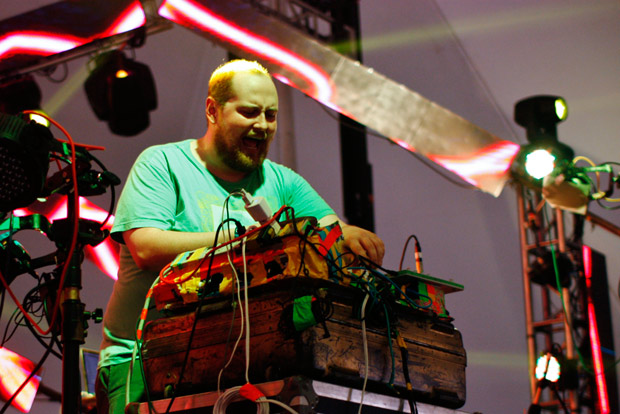 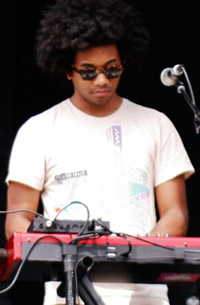 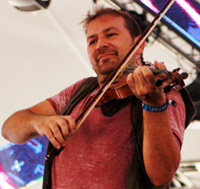 While most of the people were recovering back at the campgrounds, the determined ones got out in time to catch the early afternoon sets.  Govinda’s show at the Label Tent featured an interesting, eastern-influenced electronic mix, paired with a violin and two onstage dancers.  Toro Y Moi followed with a weak set on the Main Stage – their lack of enthusiasm and loose sounds were not enough to properly move the already half-hearted daytime crowd.  On the opposite end of the spectrum, Dan Deacon, in all his absurd glory, orchestrated his crowd only the way Dan Deacon can.  Rave circles?  Miming dance battles?  A human tunnel stretching way outside the tent?  You got it all.  Even at points when people didn’t cooperate as expected, he’d assure everyone, “If you don’t want to continue you don’t have to!  This is YOUR party, everything is up to you!”  Ear-to-ear smiles and genuine (completely sober) laugher filled the tent from start to finish of his hour-long dance party. 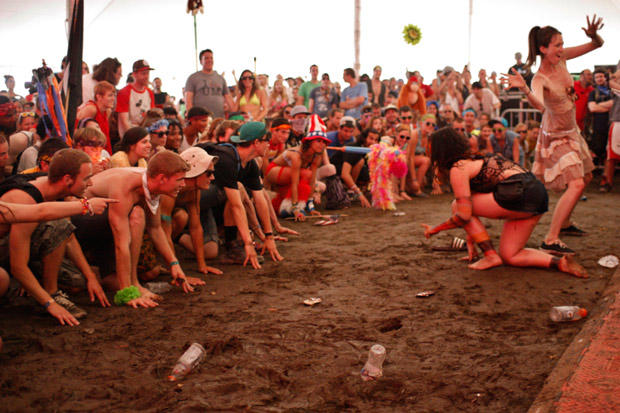 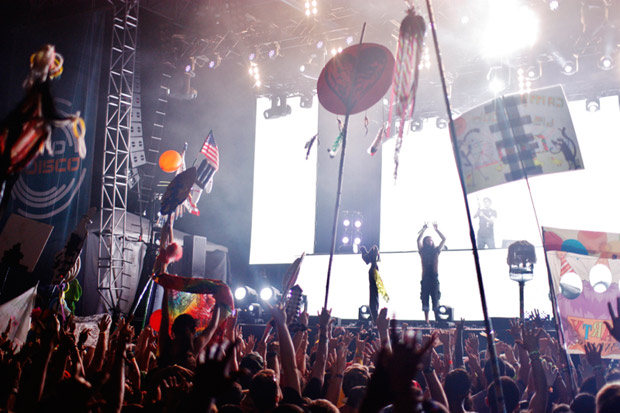 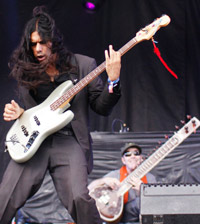 With Animal Collective backing out last minute, MCP Presents (the organizer behind Camp Bisco) acted quickly and got Thievery Corporation to fill in.  Later what seemed like the entire Bisco crowd swarmed around the Main stage to catch Bassnectar’s set.  Whether you were standing inches from the speakers or all the way up the hill, the bass was definitely enough to smack anyone hard in the face.  The two most notable songs were his “Strawberry Fields”/“Little Secrets”/“Cozza Frenzy” mash-up and his mix of “Killing in the Name of” by Rage Against the Machine, which the Biscuits also covered on the start of their subsequent set.  With a successful, glitch-free night – remember last year? (QRO photos) – Camp Bisco veteran Bassnectar probably received just as much enthusiasm as the Disco Biscuits on Day Two (since Bisco turned into a mostly-EDM festival, there’s been some sort of rivalry between ravers and jam band fans). 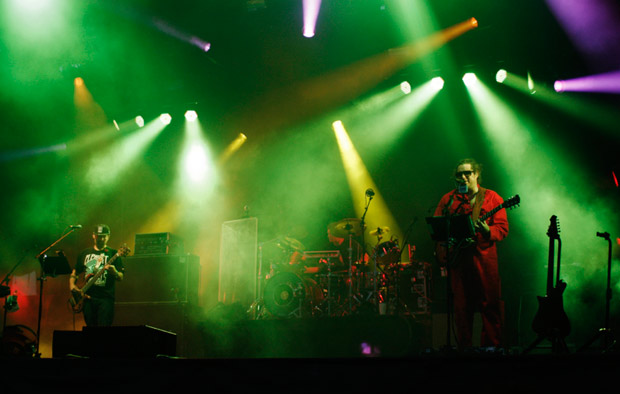 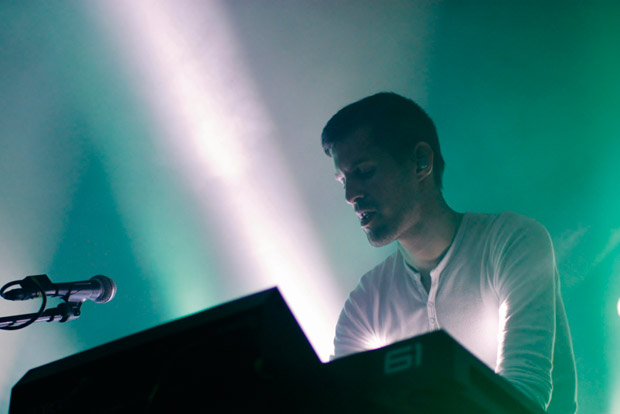 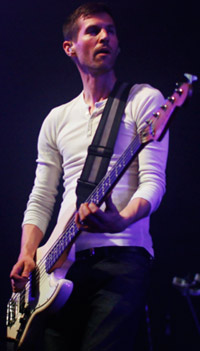 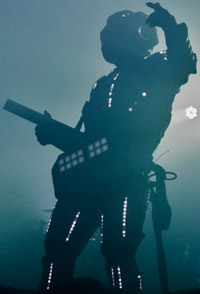 Excision’s latest live dubstep-collaboration ‘Destroid’ gave an out-of-the-ordinary start to the late night times.  Decked out in robotic armor and customized midi-guitars, Destroid pumped beats so heavy into the smoky tent it was probably enough to choke someone.  Thankfully Gigamesh provided an escape with lively, disco- remixes of familiar songs in the Label Tent.  Lotus closed out the night with a beautiful yet slightly glitched set due to some technical mishaps.  Fans were a little angry but it wasn’t a big deal; hard feelings usually don’t last long in Camp Bisco. 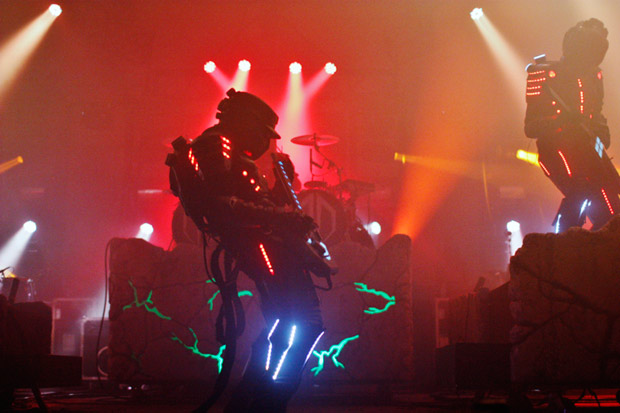 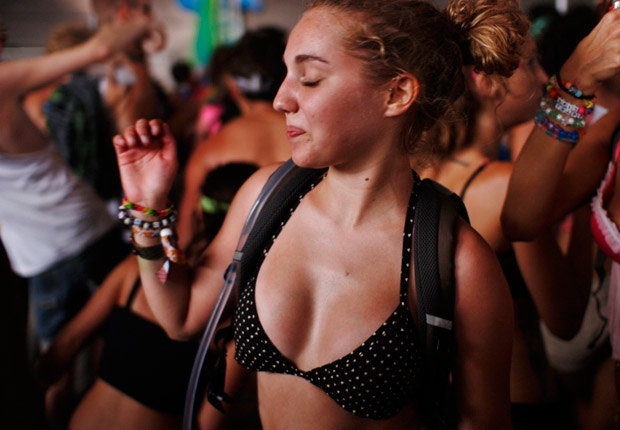 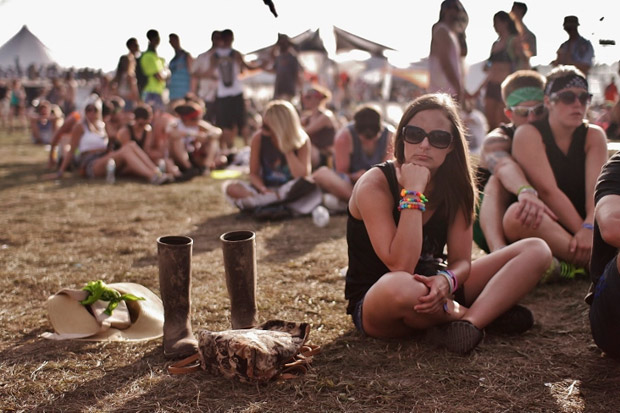 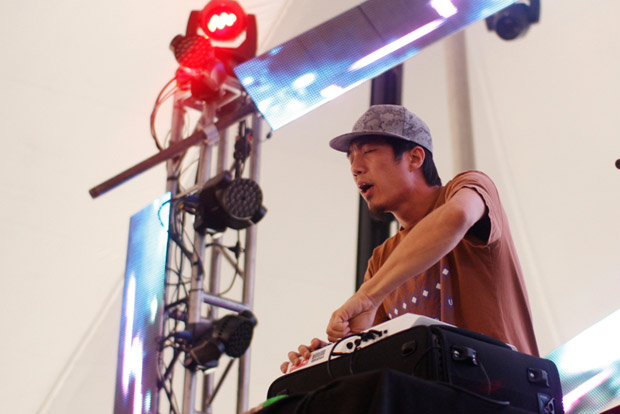 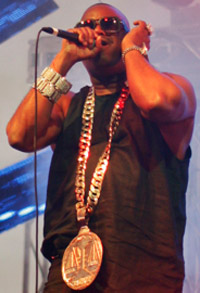 The entire festival was definitely feeling the effects of the non-stop music and dancing – even the Main Stages were starting to sink in the mud by the third morning.  This led to a couple of switch-arounds and even cancellations of daytime sets.  Break Science, originally scheduled for the Main Stage, played inside the smaller Label tent instead.  The “special guest” listed on the schedule ended up being English rapper Slick Rick, which didn’t exactly blow away the crowd’s expectations. 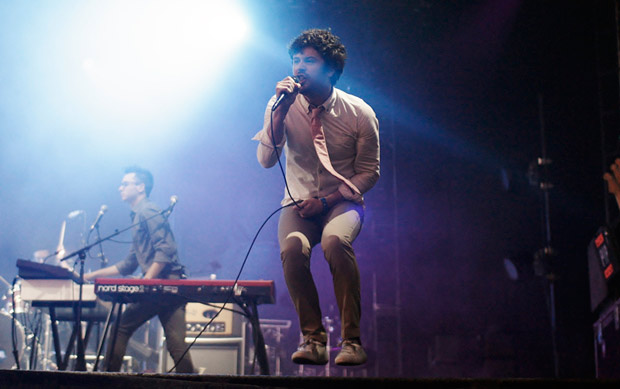 It was clear that Zeds Dead gathered a lot of hype since last year – compared to their smaller daytime set in Bisco Eleven (QRO photos), this year’s crowd was packed and restless.  Passion Pit’s sunset spot was a great indie-pop breather for everyone.  Stomping wildly around the stage, Michael Angelakos sang his usual mix of songs from Gossamer (QRO review) and Manners (QRO review) + “Sleepyhead”.  Later Gramatik came onstage with a live guitarist and started spinning jazz and old-school-funk infected beats, drawing an enormous crowd outside the B.I.G tent. 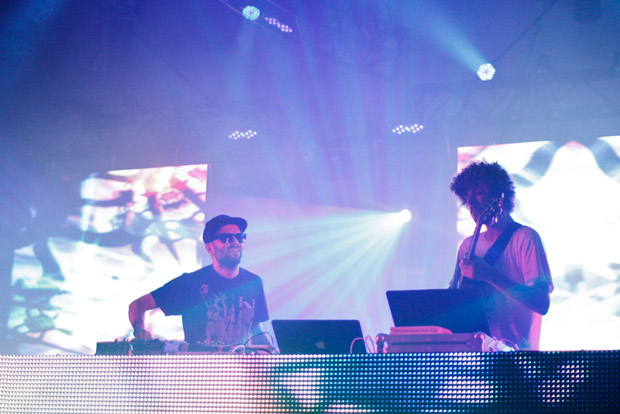 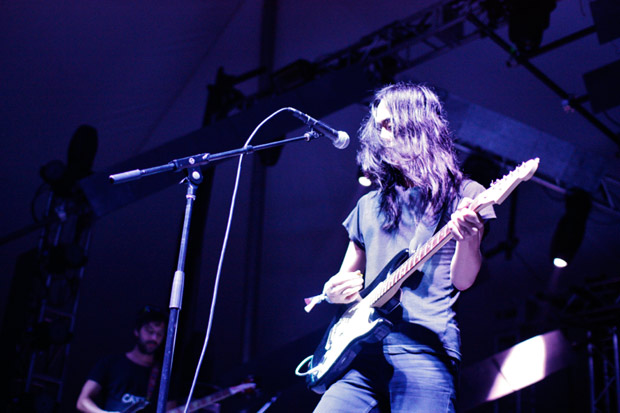 The Disco Biscuits double-set on the last day was filled with absolutely incredible moments of awe and happiness.  There was a brief moment when every single person in the crowd stood really still to properly soak in the intricate pattern of the rhythm and lights.  From the beginning all the way through the encore, the Biscuits played seamlessly and beautifully, leaving everyone with memories of a Bisco they’ll never forget. 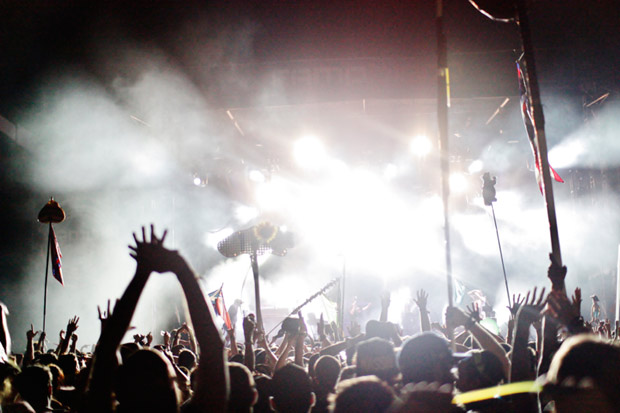 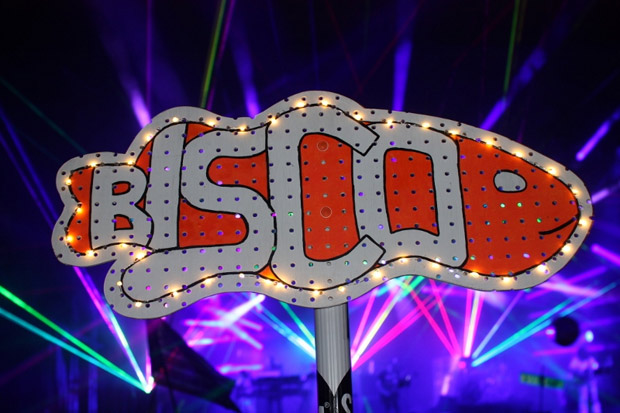 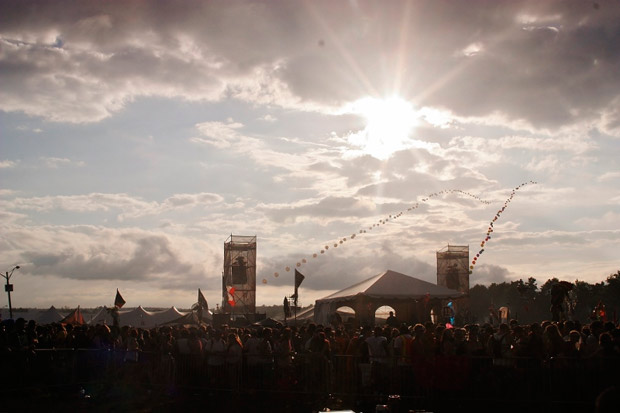