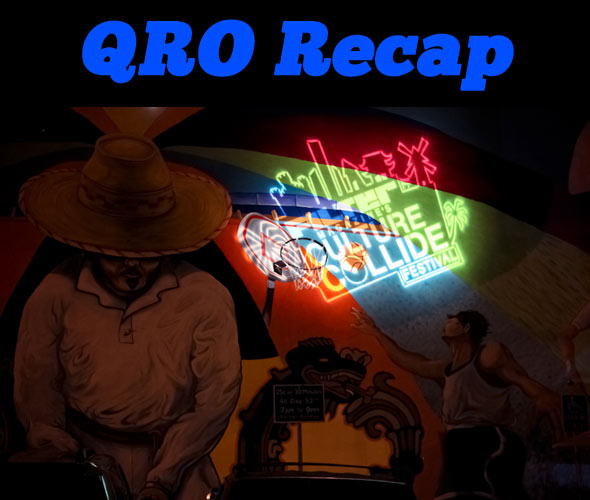 Four nights, 50+ bands and DJs, 8+ venues, 20 bucks.  What?  The last time you could spend a single Andrew Jackson for four nights of good times in LA was probably back in a day when kids actually had an idea who AJ was.

Filter Magazine’s annual, globe-spanning collection of indie music again made Echo Park home this October, providing a unique opportunity to hear some of the best (and with exception to the headliners, for the most part unknown in these parts) bands and music styles from around the world.  Alt-rock from Iran?  “Asr be kheyr!”  Reverb from Australia?  “Oi!”  Chick rock from Denmark?  …Well, you’re probably getting the point, mate.  From DJs to acoustic, dance parties to zone-outs, Spain to Sacramento; you’re welcome to hear, here.

The first thing you’ll notice when arriving in Echo Park (besides a sudden, innate desire to lock you car doors…) is how close together the fest actually is.  A traditional ‘festival’ only in terms of line-up and multi-day span (no overnight camping or special rec zones are provided (this is LA, after all), nor are djembes, cargo shorts, or dreadlocks welcomed on property…), all eight-plus venues are centrally located within a mere block or two of one another.  From small rooms at TAIX (a French restaurant, in normal times) and intimate affairs at a local church hall, to full-scale club shows at The Echoplex and the weekend-ending, multi-stage Toyota Antics Block Party throughout Sunday, a single wristband could allow even the casual indie fan to experience 10, 20, maybe 30 bands during the event – without walking much more than a mile, in total.

If this year’s line-up is any indication, girl rock is back.  From headliners CSS (Brazil) and YACHT (USA), to standouts MEN (former members of Le Tigre, USA) and The Asteroids Galaxy Tour (Denmark), and many on the buttons and lights (The Analog Girl (Singapore), was legit), the women’s lead in today’s indie realm is firmly set.  Even the most masculine of this year’s offerings featured at least one female band member, many taking role as lead guitar, not just relegated to keys or rhythm as in year’s past.  And, more importantly, they fuckin’ rocked.  CSS drew the biggest crowds of the weekend, with a standing-room-only set on Saturday night, followed by a packed Block to close out the weekend on Sunday.  YACHT held their own as Friday’s top billing at The Echoplex, oozing such sex and blistering unavailability, that any man or woman (gay or straight) there would be hard pressed to not admit to being turned out by their performance.  And as for the Asteroids, this should about sum it up: overheard during their crowd-moving set during Sunday’s Block Party, “That hot chick from the Heineken commercial can fuckin’ SING!”  Well said, tipsy hipster; well said.

But it wasn’t all lady-fronts and dance parties.  Culture Collide’s passion for all musics assures that most fans of any genre will find satisfaction (the event being put on by LA’s knowledgeable music leaders, Filter Magazine, guarantees you won’t be left hanging for long).  Some other festival highlights included: The Morning After Girls from Australia (if the likes of Spiritualized ever went and slipped one over on Muse, they’d probably birth TMAG), DJ sets from Lindstrøm (Norway), Classixx (USA), and DJ Harvey (UK), energy-sweat-rock from Young Liars (Canada), a unique, single-light bulb lit show at Origami Vinyl by Writer (USA), and watching a certain, drunken Kardashian sister and her posse get kicked out of TAIX on Friday night (yep).  Right in front of us, while smoking outside the venue, and it was hilarious.  The only bad part?  We were right in the middle of switching lenses on our cameras.  TMZ gold, blown.

All said and done, Culture Collide offers a huge bang for your bucks (which, for money-hungry LA, is borderline illegal), and the exact sort of genre-spanning showcase fest that our friends in Austin, New York, Chicago, and Miami have been experiencing for years.  Growing in popularity, and with Filter at the helm, CC shows no signs of a letdown in the years to come – and so far, hasn’t been adulterated by its own success.  Music comes first, and, somewhat surprisingly, there’s no BS, no stress; the only vibes felt are the ones coming from Irish/Portuguese/Australian/Slovakian/etc. feedback meters.  When the first weekend in October rolls around next year, be prepared: grab your dancing shoes, tip your glasses, and above all, never be caught without your camera ready – failure to snap a Kardashian in ‘action’ will haunt you for longer than you’ll want to admit.