After setting the bar high last year, there was wonder whether or not FYF Fest 2017 could top its predecessor. After moving to three days for the first time... 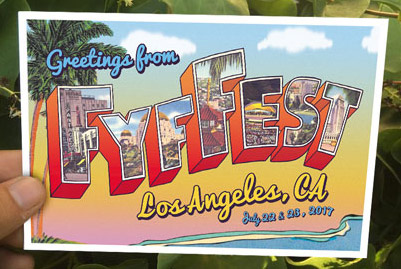 After setting the bar high last year, there was wonder whether or not FYF Fest 2017, Friday-Sunday, July 21st-23rd, could top its predecessor. After moving to three days for the first time in the festival’s lengthy history, the answer was a resounding yes.

FYF Fest has become the go-to festival for the hip kids that are too cool for Coachella’s lineup full of generic electronic music and mainstream radio-friendly acts. This festival is for those who have grown out of Coachella, and whose leanings are more niche.

That was reflected heavily in this year’s lineup. Outside of a few sets, the crowd was much older than the one you see roaming the Polo Grounds in April. 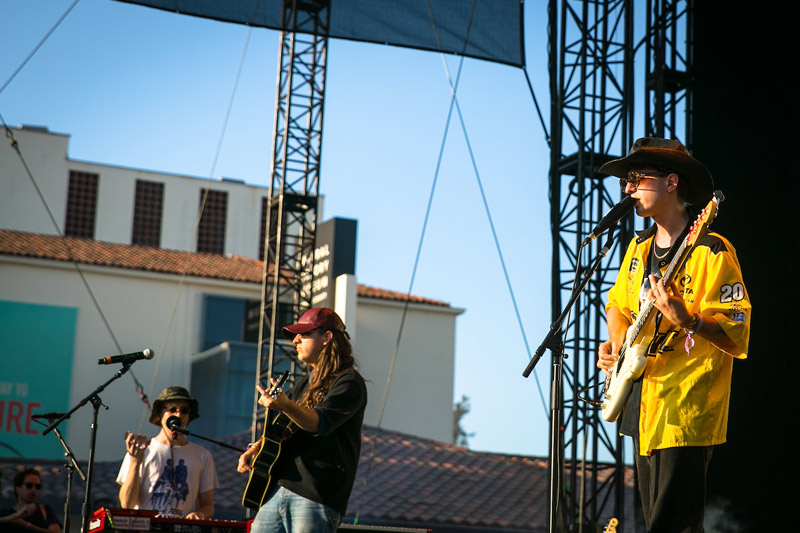 Going to three days for the first time, Friday’s action didn’t kick off until the early evening. Indie rockers Beach Fossils got things started with a laid-back set. It also featured one of the few guest appearances of the weekend, as Rachel Goswell of Slowdive came out for “Tangerine” (they’d perform later that evening). 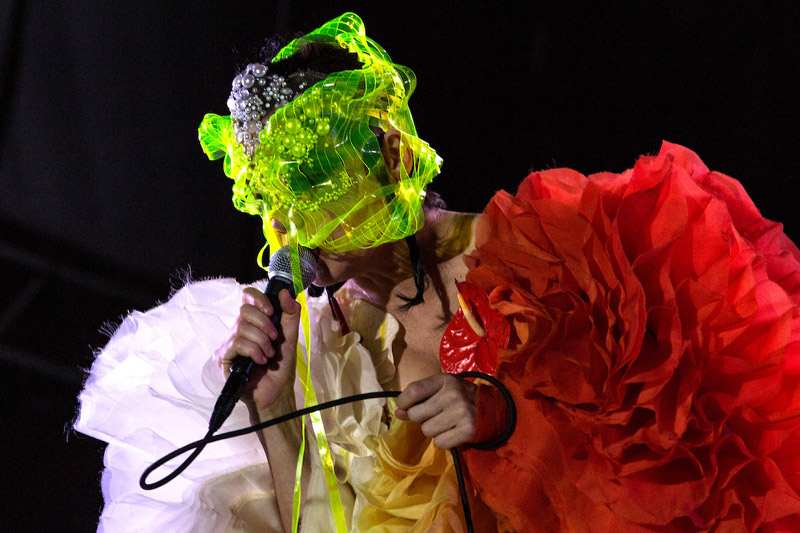 A thick crowd showed up to watch Björk flex her spectacular vocals on the main stage, dressed in something that made her resemble a luffa. The live strings behind her added even more emotion to her already feels-heavy tunes. The video screens that accompanied her set were interesting, but sometimes they malfunctioned. For some at the back of the crowd, it seemed as though they enjoyed the idea of Björk more than her actual music, as people left after one or two songs in heavy numbers. 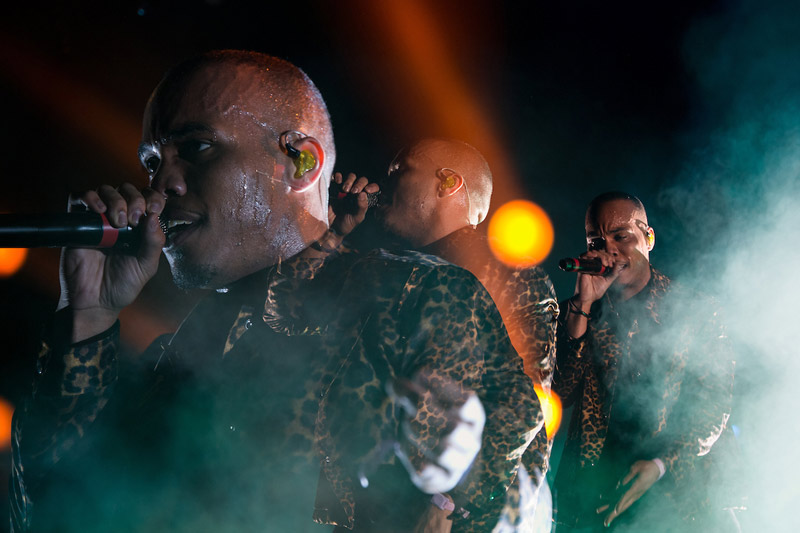 Anderson .Paak unsurprisingly delivered one of the best sets of the entire weekend. Anyone who has followed the Los Angeles-based hip-hop artist over a whirlwind last 18 months since he dropped his prized Malibu album knew they were in for a treat. There’s so much to be amazed by in his live show – from him jumping on the drums while rapping, to his awesome backing band. But what really does it for me is how he changes the arrangement of some of his songs, slowing down “Room in Here” to give people a chance to breathe before stepping things up again. He will be headlining festivals on his next album cycle, no doubt.

Missy Elliott performing her first show in the U.S. in ten years was the crown jewel FYF Fest booked in 2017 – now it was only a matter of if she could live up to the billing. She came out of the gates extremely strong, ripping through parts of many of her hits (but rarely any full songs). She seemed to get winded a bit halfway through, taking a number of breaks to catch her breath. No one seemed to mind – not Beyoncé, nor Janet Jackson, who were in attendance taking in the show. It wasn’t quite the strongest show of the weekend but was definitely one of the most talked about. 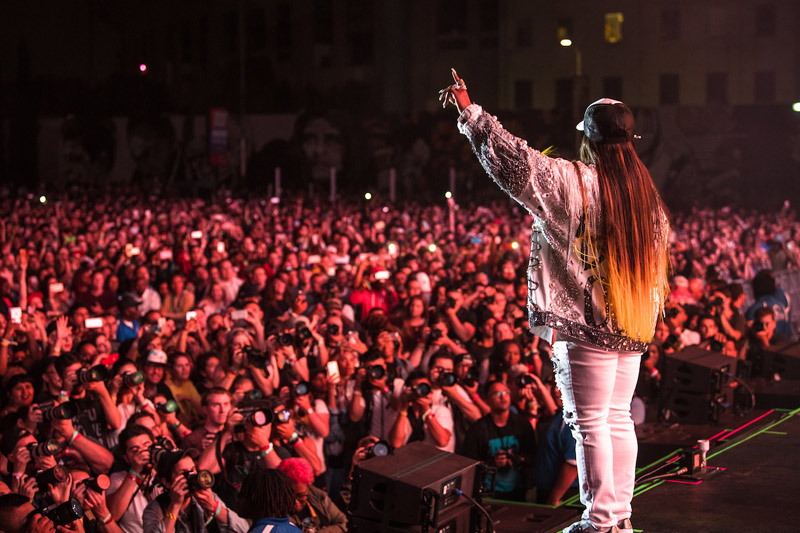 Saturday was the ultimate day if you leaned R&B and funk. Frank Ocean had cancelled on FYF Fest the week of two years ago (QRO photos), and people held their breath until the moment he finally appeared on stage. It was such a meticulously planned show on his part – the craziest moment undoubtedly being when Brad Pitt made a “guest appearance” by holding a phone up to his ear for the duration of “Close to You”. A camera operator that appeared to be Spike Jonze seemed to direct the show, making the “production delays” that forced the cancellation of gigs earlier this year make sense. It was a brilliant performance that was the key reason single-day Saturday passes sold out so quickly. 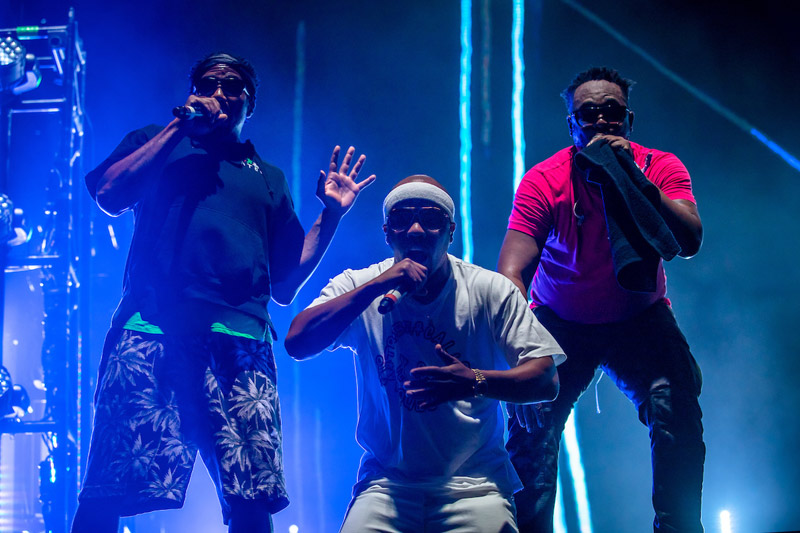 Earlier in the night, A Tribe Called Quest delivered what they said would be their last show in Los Angeles. It’s clearly been tough for the group to carry on without Phife Dawg, who passed away unexpectedly last year. Q-Tip delivered an impassioned speech about how being on that stage is helping them cope, and they ran through hit after hit for the ultimate head-bob set of the weekend. Raphael Saddiq unexpectedly joined them to play an upright bass with Phife’s face on it during “Buggin’ Out”. The encore of “Can I Kick It?” and “We the People” brought the house down and was a great way to wrap things up. 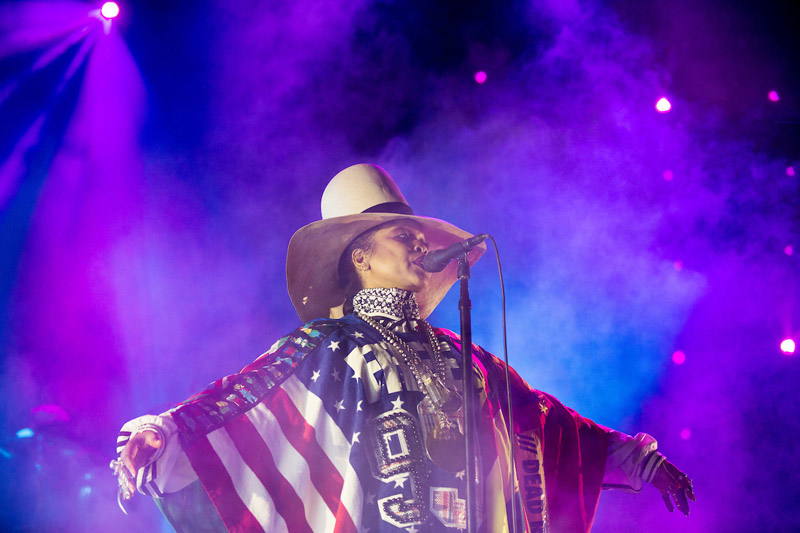 Elder stateswoman Erykah Badu is a diva, but she’s earned it. She arrived on stage 20 minutes late, but in her signature cap and swagged out attire. She welcomed each age group, pausing to say she’d been waiting to mess with the ‘90s babies until they were mature enough to handle her, which apparently was right now. She took them to school, igniting the crowd with “On & On” and especially “Bag Lady”, her set serving as a delicious appetizer to Frank Ocean. 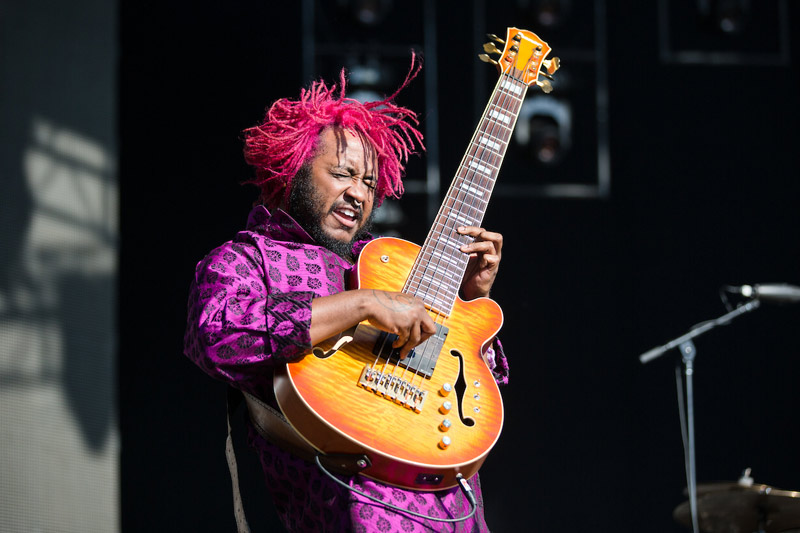 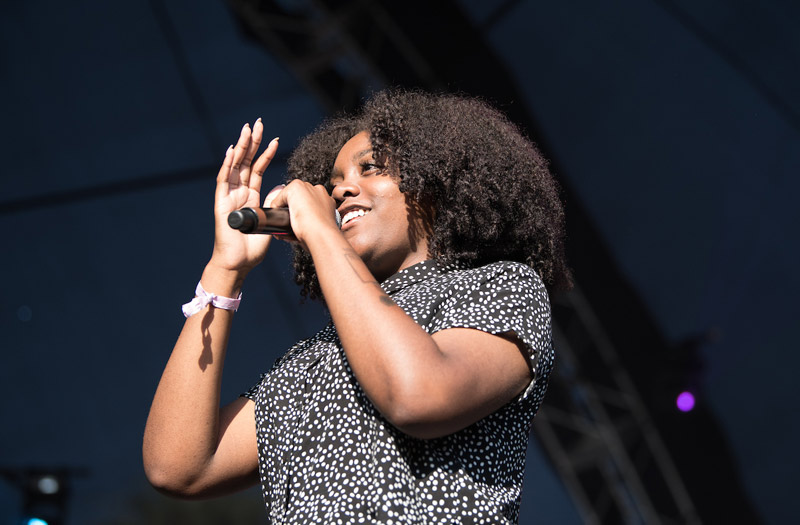 Other R&B and hip-hop names that made a mark Saturday were Thundercat, who delivered some mesmerizing bass jams from his 2017 masterpiece Drunk, and Chicago rapper Noname, who is just now arriving on the scene as a must-see. Nicolas Jaar closed the night with a mind-blowing set that made downtown Los Angeles feel like a European nightclub. Mitski dropped some angsty rock jams earlier in the day to get things started. 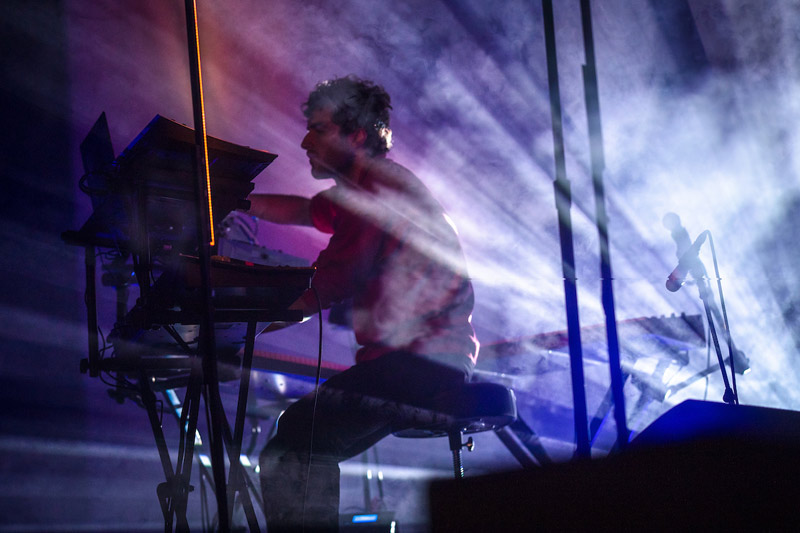 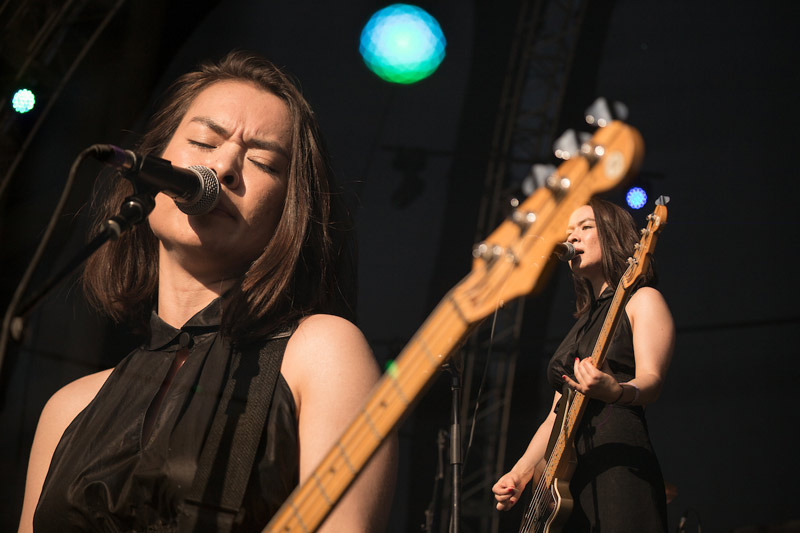 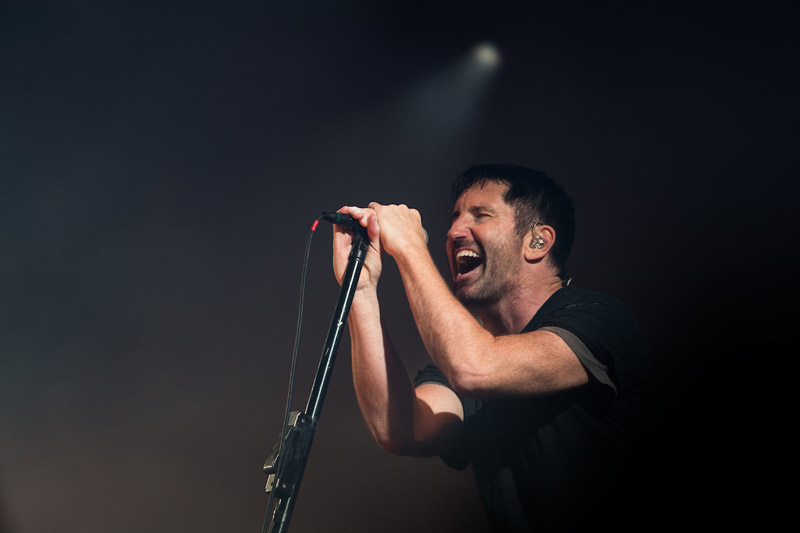 Sunday was for the rock fiends. After a warm-up show in Bakersfield a few days earlier, it was Nine Inch Nails’ first real show in three years. I’m still nursing bruises from being smashed in the pit ten feet from the stage, but it was worth it. Trent Reznor paid a beautiful tribute to former touring mate David Bowie with a cover of “I Can’t Give Everything Away” from the late icon’s final album Blackstar (QRO review). The production was scaled back from other iterations of their show, but the amount of effort they put into it was not. 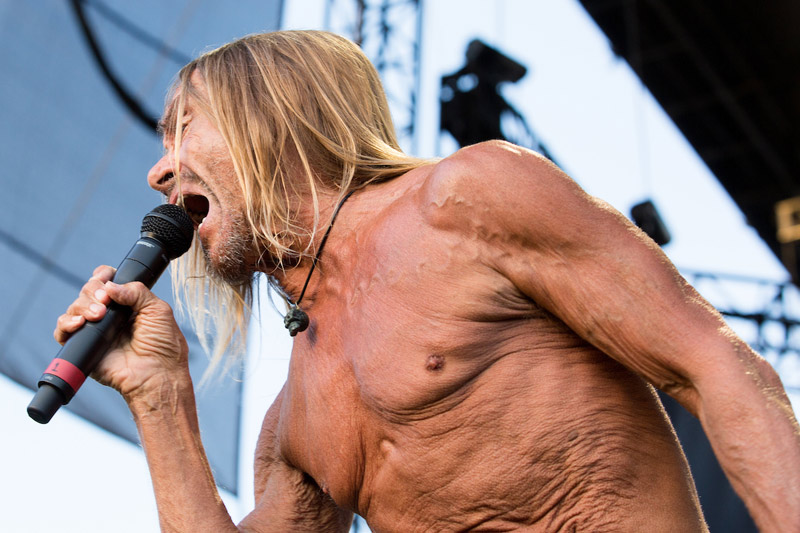 Fellow rock icon Iggy Pop showed he still has it in a hit-heavy set that saw the former Stooges singer exert more energy than bands a third of his age. He went into the pit for a sing-along, and proved how punk rock he is when he shot snot out of his nose on stage to the cringes of many around me. 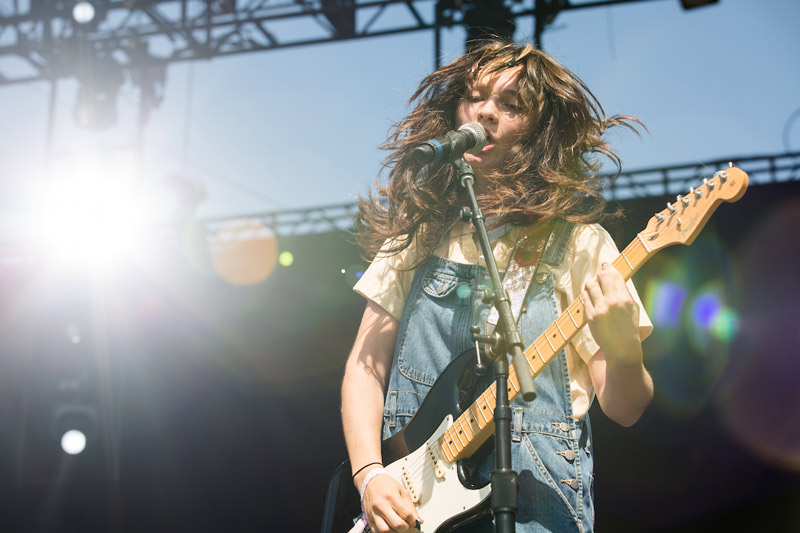 Local favorites Cherry Glazerr kicked things off right with a brief but fun rock set that had me feeling like I was surrounded by the Echo Park High Class of 2017. Lead singer Clem Creevy is one of the goofiest and most intriguing people to lead a band in a long time, and they’re just getting started. 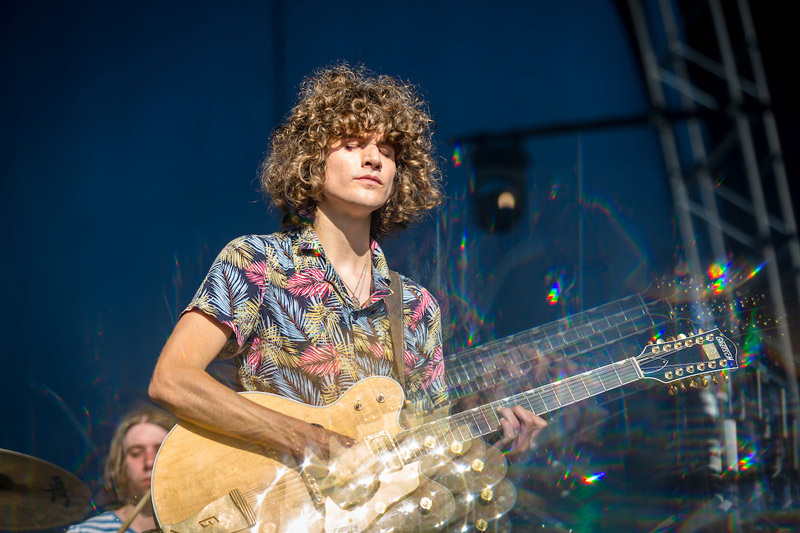 British rockers Temples made magical soundscapes, leaning heavily on their 2017 record Volcano (QRO review), one of the year’s best records.

There was a solid mix of non-rock on Sunday. Solange had one of the weekend’s best sets, and she choreographed and directed the whole thing. The level of detail she put into her show was not lost on the crowd, who grooved out with her for more than an hour. 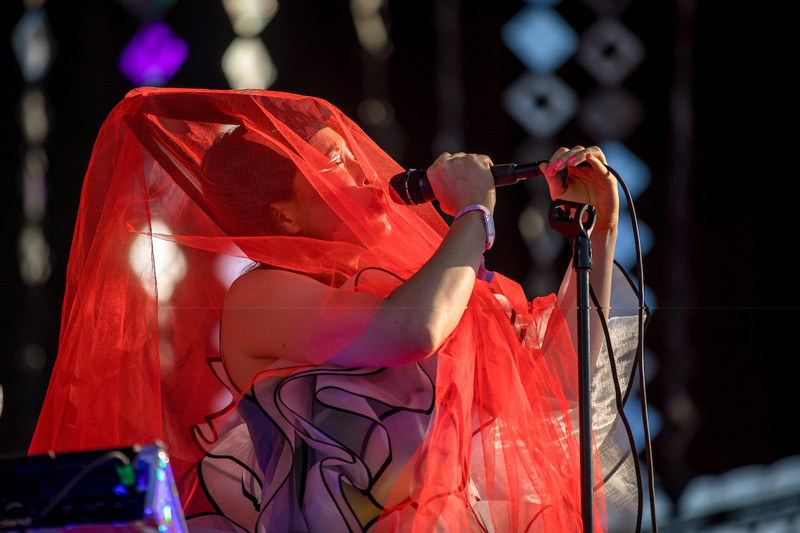 Little Dragon played the same stage earlier in the day, with lead singer Yukimi Nagano willing people to dance, even as the sun refused to go down.

When a festival expands, there is always worry that it will lose its message, abandon what its original mission was. In 2017, FYF Fest expanded, but doubled down on what made it great.

With a budget clearly beyond what Sean Carlson ever thought possible when he started it in 2004 in small venues in Echo Park, the festival hasn’t strayed. And as other festival lineups get more and more homogenized, FYF Fest felt like something worth celebrating all weekend. 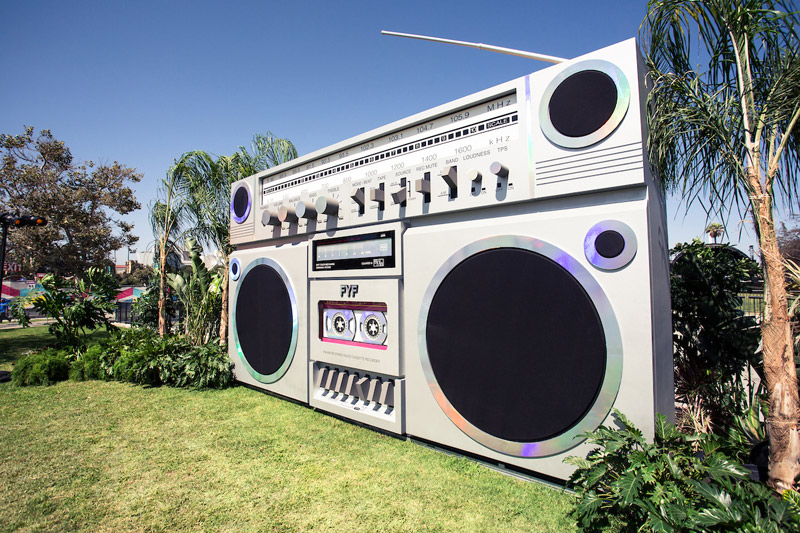