The Le Guess Who?, the club festival par excellence of the north of Europe came back this year to Utrecht in Netherlands with a very interesting line-up of artists.... 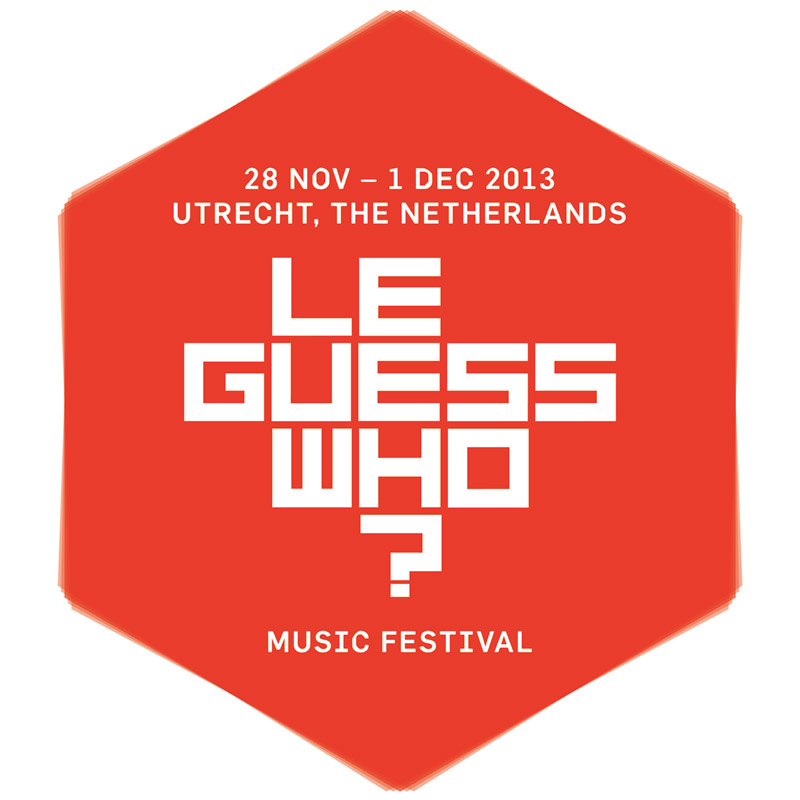 The Le Guess Who?, the club festival par excellence of the north of Europe came back this year to Utrecht in Netherlands with a very interesting line-up of artists, Thursday to Sunday, November 28th to December 1st.  Instead of making a long intro about the many pros the LGW has, let us go straight into the action: 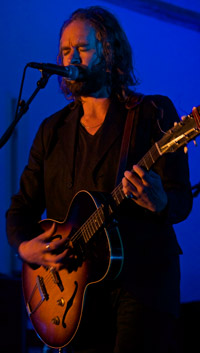 The festival started at a new venue for 2013, the Janskerk (the Church of John) at the heart of Utrecht.  Sober, uncomplicated and tall, the Janskerk is like a little box of chocolates, perfect for intimate yet grandiose sounds.  The night commenced with experimental blues guitarist Duke Garwood.  Known for his contributions with Savages and Mark Lanegan, the British artist filled the space with calm and tenuous manners, like a pilgrim searching for God, maybe… 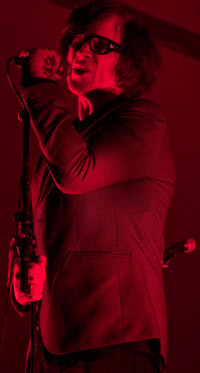 Moments later Mark Lanegan took the stage.  Mixing his own tunes (“Gravedigger’s Song”), tracks written with Garwood such as “Mescalito” and a bunch of very well-done and well-crafted covers, like Kurt Weill’s “Mack the Knife” and Lou Reed’s “Satellite of Love”, Lanegan, far from his sort of goth persona, used all his savoir-faire to transform the pieces into croons that suited perfectly the environment.  There was no place for drums but for string arrangements, no space for darkness but for melancholy and hope.  Lanegan gave the first touch of class of the 2013 Le Guess Who? 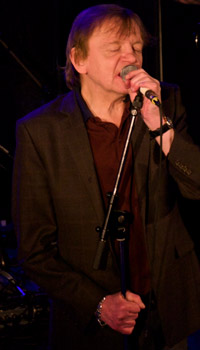 Afterwards, we can safely say The Fall has a problem: Mark E. Smith himself.  Once, one of the prominent figures of England’s post-punk scene, Smith has become a parody of himself, a sort of Mr Magoo who doesn’t seem to care about anything (nothing new, actually).  It’s impossible to deny the power of tracks like “Amorator” or “Hot Cake”, but when the singer sits at the amps behind the stage from the third song of the set onwards, and doesn’t even care about his own band, something’s very wrong.

Elsewhere, Glasser tried very hard to impress the Dutch audience after coming out 20 minutes late due to tech problems, but to no avail, the result of the effort sounding flat; Dirty Beaches were, otherwise, very inspired and completed an effortless set that was wildly received by their fans; and Oneohtrix Point Never saved a lukewarm start getting everybody on their feet at the Tivoli de Helling. 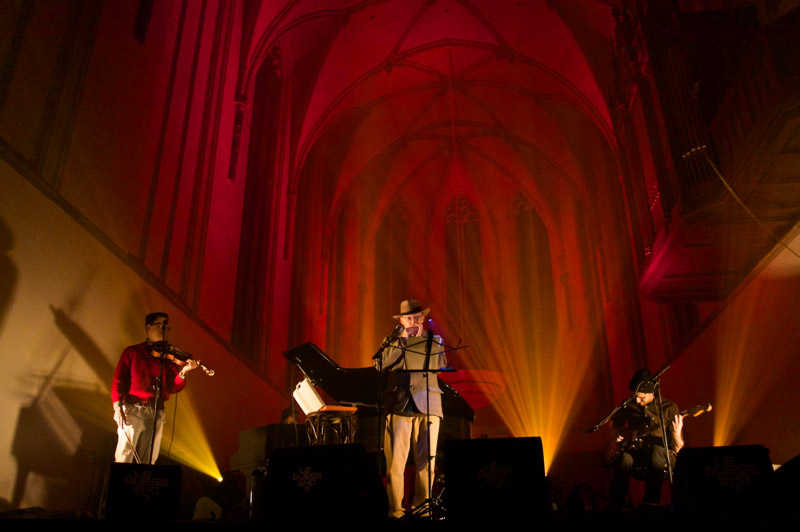 Day Two took us again to the Janskerk, where veteran New Yorker Ed Askew was introducing his latest release, For the World.  For those of you who don’t know him, Askew is in his early seventies, so he has this knowledge of making true folk and popular songs that some times verge on the oneiric.  Old tunes like “Ask the Unicorn” show the fragility of beauty and an urge to remain true and genuine.  Askew showed himself as a normal chap who simply has a weakness for contemplating what surrounds him, and describes it and how he feels with honesty, like he did with songs such as “Clint Eastwood”, so beautiful it’s very hard not to feel moved. 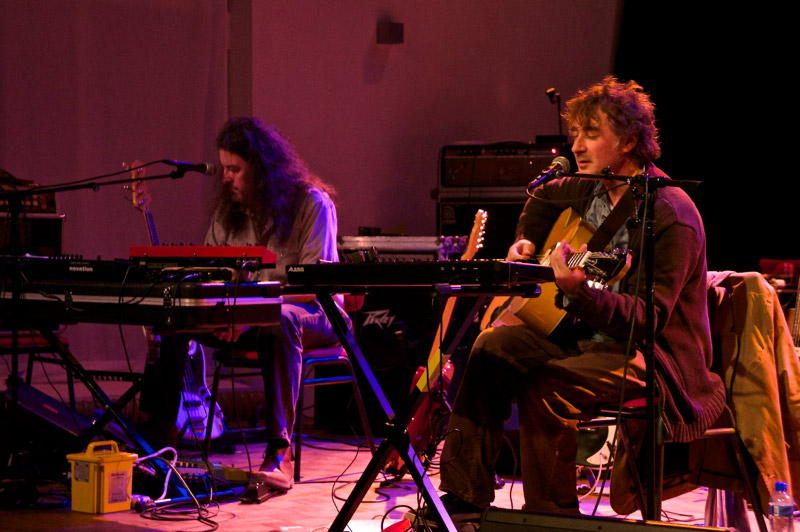 Moving on, at the Leeuwenbergh (no, don’t ask us how to pronounce that), Califone and Esmerine played the underdog and as it turned out they were two of the most interesting bands to watch.  The former were introducing their latest release, Stitches, and apart from some folk-country numbers like “Movie Music Kills a Kiss”, the rest was an electric experimental storm that put them miles away from their studio work.  Really interesting, and a band to watch closely. 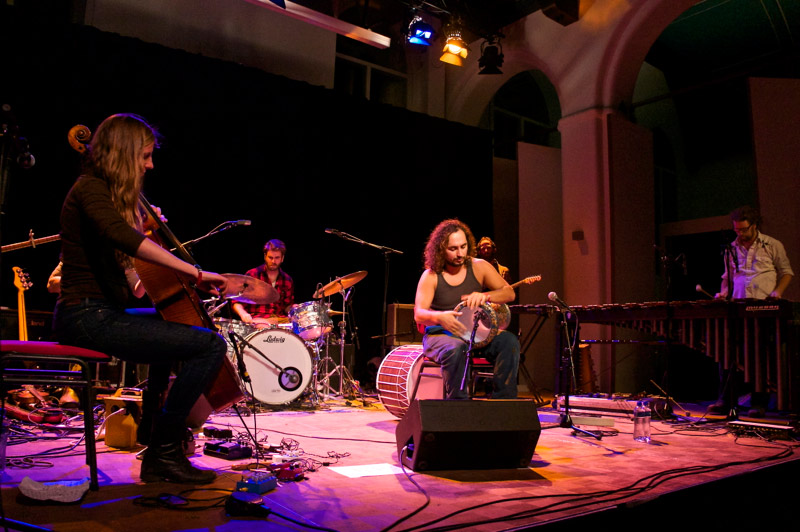 Esmerine are one of the bands of Godspeed You Black Emperor’s label, Constellation.  Their visit to Utrecht was the second of their current European tour based on Dalmak, their new record recorded in Istanbul.  Contrary to their usually contemplative ethereal music, the Mediterranean vibes one can find all over Dalmak give the music bigger strength and power.  Especially powerful were “Translator’s Clos” and “Yavri Yavri”, all benefitted from long trancey intros and strong changes in melodies and rhythms. 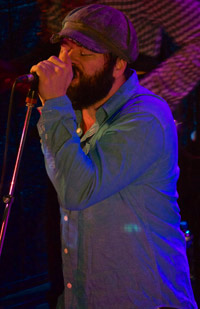 Back to the Tivoli Oudegracht, The Black Angels gave a real lesson in cosmic and space psychedelia with a long trippy set.  Starting with “The First Vietnamese War”, the five-piece had it all in their favour to win the audience over.  And they duly did so. 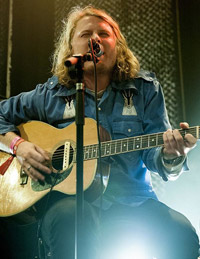 In other venues, the Ty Segall-curated night stole the show for many fans.  Segall themselves played a semi-acoustic rendition of Sleeper that positively surprised everyone, Magnetix sounded like a riff steamroller and J.C. Satan and Jacuzzi Boys completed a varied yet solid evening, the formers highlighting their instrumental side, whereas the latters’ lo-fi had a very different colour onstage. 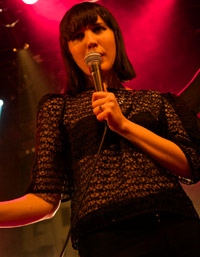 The third leg of the Le Guess Who? 2013 started at the old Tivoli with England’s Pins.  The Mancunian girls displayed all their energy in a short but juicy set of what people describe as post-punk.  The NY look of the girls may mislead the purists, but their sound is as genuine as it gets.  The star of their set was the title track from their debut album, Girls Like Us, and their sheer charm make them a band to watch. 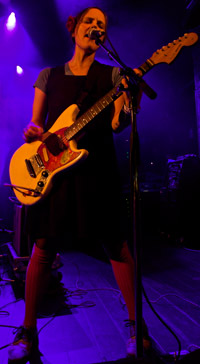 Scout Niblett brought the silence to the Tivoli, as a stark contrast to Pins.  The English-born singer based her set on her latest album, It’s Up To Emma, an emotional affair yet one of her most accessible works.  Still sounding raw and forthright, Niblett is a delight to watch. 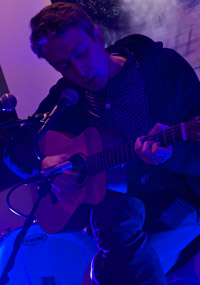 On to the Jaap Sleper gallery, where we witnessed two one-musician gigs.  DM Stith is the frontman of one of the bands of the year, The Revival Hour.  On his own, Stith offers a lively, very melodic and very dense folk-pop.  The sheer light of lovely tunes like “Morning Glory Cloud” discover a brilliant singer and guitarist, totally in control of his capabilities and the way he exploits them.  The result was very rewarding and one can only wonder what he could’ve achieved if he played at the aforementioned Janskerk. 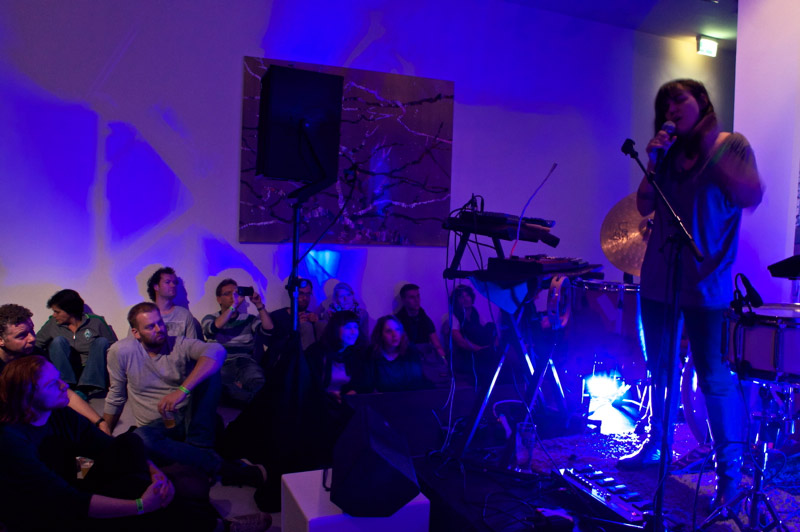 Emily Wells then took the small stage at this art gallery and used all the resources available to her: violin, keyboards, percussion, voice, programing, etc.  Her unique mix of electronica, hip-hop and R&B seemed confusing at first, but all elements found a place and at all times all made sense.  Currently immersed in a European tour, she made some loyal fans in Utrecht, for sure. 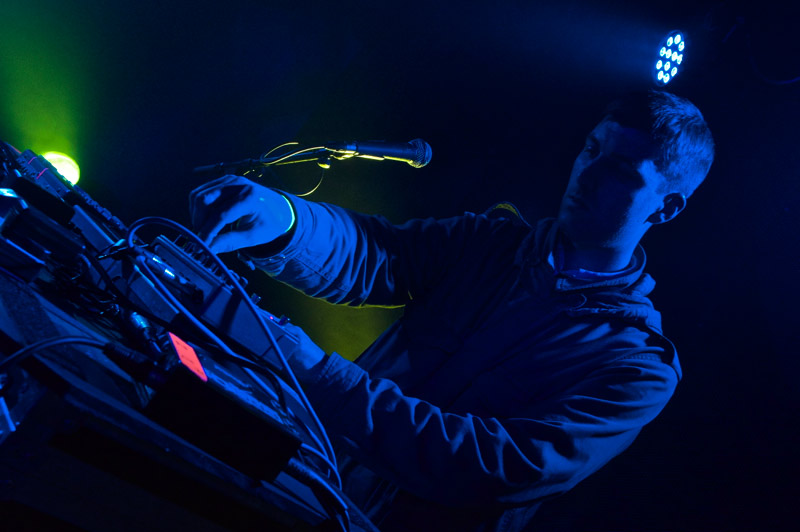 And at the Ekko, electronic trio Darkstar started in a shaky fashion due to some tech problems but soon their dense and hypnotic melodies, especially those from their 2013 record News From Nowhere, flooded the small venue and manifested a very creative and exciting moment for the Londoners…

Elsewhere, the best gig was offered by METZ.  We won’t say anything new about them: Screamy noise-rock at a 100 mph and very difficult to dominate would be a superficial way of describing the trio’s way of playing onstage. 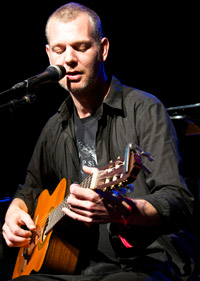 Again at the church with a difficult name, the Leeuwenbergh, Matt Elliott appeared onstage with a glass of whisky as he had a terrible cold.  But the British troubadour didn’t seem affected by illness once he started playing.  Classics like “Dust, Flesh and Bones” proved magnificent, but “The Kursk”, about the tragedy of the sinking of the Russian submarine of the same name in 2000 was the definitive moment of the whole Le Guess Who? 2013.  Elliott, a real master in the art of creating loops and juxtaposing melodies while the song is progressing, condensed all the pain, desperation, anger and impotence of a group of people betrayed by their own country, whose destiny was to end their days in an old, lost, and rotten sunken machine, ignored by the authorities and severed from their families.

When all hope seemed lost, Elliott decided to end the set with a very different version of “Also Ran”, filled with the hope of seeing the loved one again, some day.  The best gig of the Le Guess Who? 2013 by very far. 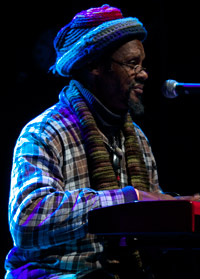 Then, two pianists.  Moonface (Spencer Krug, previously of Wolf Parade, Sunset Rubdown) displayed a romantic, cheeky, dreamy and a bit tongue-in-cheek set.  Self-aware that his capabilities could not be those expected of a recitalist, Spencer Krug laughed at himself and left the audience in a lighter mood than Matt Elliott.  Then, back at the old Tivoli, Lonnie Holley used an electronic keyboard played in a dada-improvised way to tell us stories about his infancy and his relationship with people and how we fit in the universe, just the way they came to his head.  Different, charming and approachable. 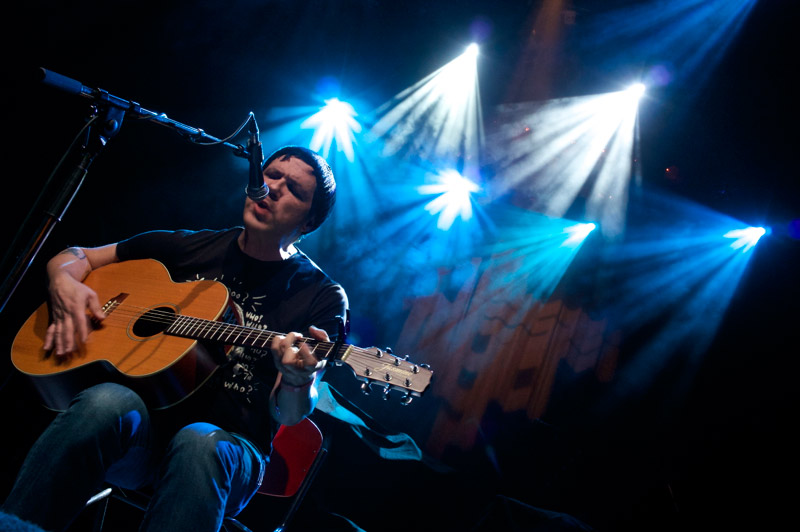 Damien Jurado, who also designed the official LGW 2013 t-shirt and had a little expo of his work in the upper floor of the Tivoli (‘This art is more me than my own music, because if my music showed the real me, I probably wouldn’t be here now’), played a set of his insightful and depressive music much to the delight of the audience, showcasing some of the songs of his forthcoming record, Brothers and Sisters of the Eternal Son. 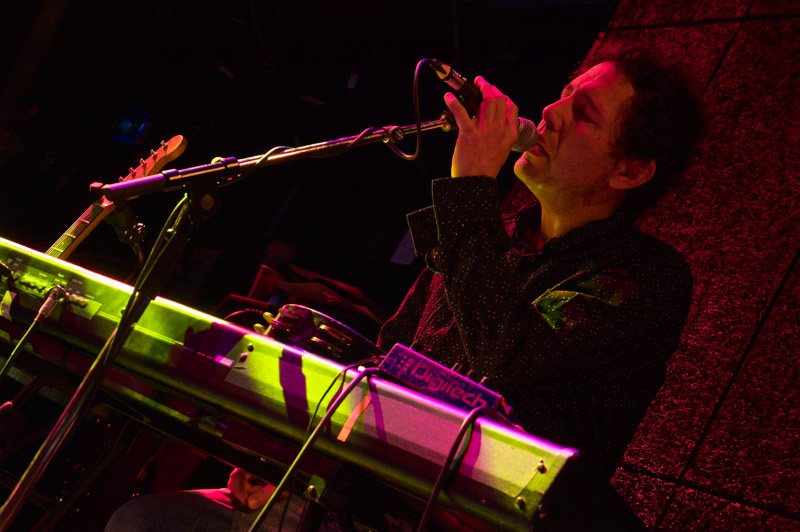 And Yo La Tengo once again played an unpredictable set that started pretty well with “Stupid Things” and “Moby Octopad”.  But within a few songs the guitar-hero-noise side of the band appeared and with that, all hope for a solid compact concert was vanished.  The hysterical side works in songs like “Before We Run”, but dedicating almost half of the set to their extreme-sounding paranoias made for a boring gig, not even saved by the cover version of Daniel Johnston’s “Speeding Motorcycle” they played as an encore with guests Michael Champan and Glenn Jones.

But luckily, to end the Le Guess Who?  We had OM who exactly as their set in the Primavera Sound (QRO recap), displayed sobriety and expansion as their trademark onstage.

So, less noisy and experimental than in 2012, but more melodic and forward thinking, the Le Guess Who?  It’s still a very good and interesting festival that showcases a balanced mix of new names with established artists.  If you have nothing good to do in late November, think of it, and take the chance to see an excellent club festival set in a very beautiful and cosy town in Europe.