Middle of the Map Fest is located in Kansas City, Missouri in the city’s original entertainment district, Westport. It takes places over the course of three separate weekends,...

Middle of the Map, Middle of My Heart

Middle of the Map Fest is located in Kansas City, Missouri in the city’s original entertainment district, Westport.  It takes places over the course of three separate weekends, having kicked off on April 3rd and closing curtains on April 20th.  Centered on showcasing Midwest talent and entrepreneurial spirit, each weekend has a different focus, of Music, Forum or Film.

April 3rd to 5th, I was fortunate enough to see all three days of music and, as a proud Native of KC, was jazzed (pun intended) to experience so much variety in musical acts, such love in crowd response, and all-around good vibing out of a largely midwestern crowd.  There were some incredible headlining performers from any corner of the states and even internationally, but so much of the Fest was made up of folks from the middle of the country, er, Middle of the Map. 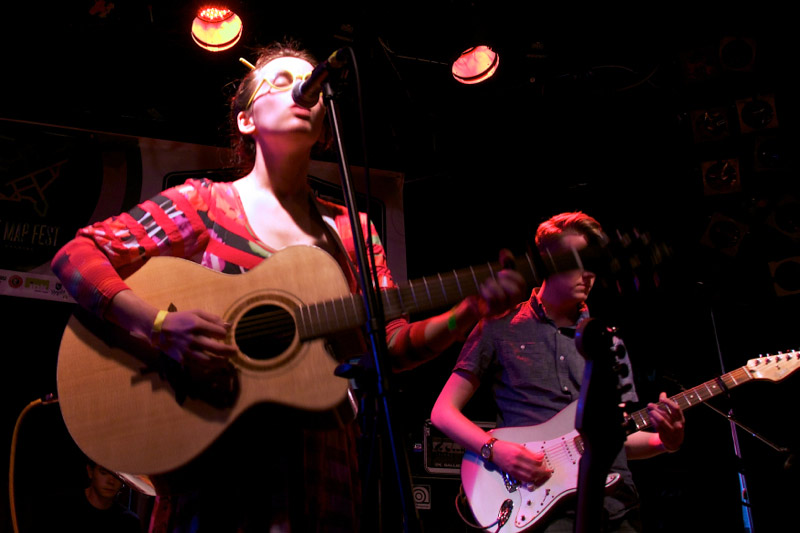 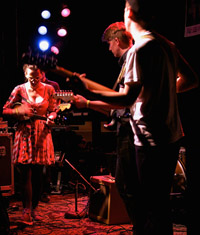 Thursday, we started with Ings, a five-piece band put together by Inge Chiles.  Of all of the very talented folks I was graced with on this night, I was especially taken with this band.  I was immediately transfixed by Chiles’ stage presence.  Her perfectly round, yellow frames and outfits comprised of mixed patterns and boots grabbed your eye like they should, but her steady smile, sweetly-toned-yet-versatile voice and tendency to sing on her tippy-toes, kept you.  She went from ukulele to six-string guitar to electric and back while making jokes with her audience and ever-so-subtly giving queues to her attentive band.  I found myself babbling about all of the artists I could possibly hear as an influence in the wide range of sounds made by the talented group: Belle & Sebastian, Rilo Kiley, or even Tiny Tim (http://iloveings.com). 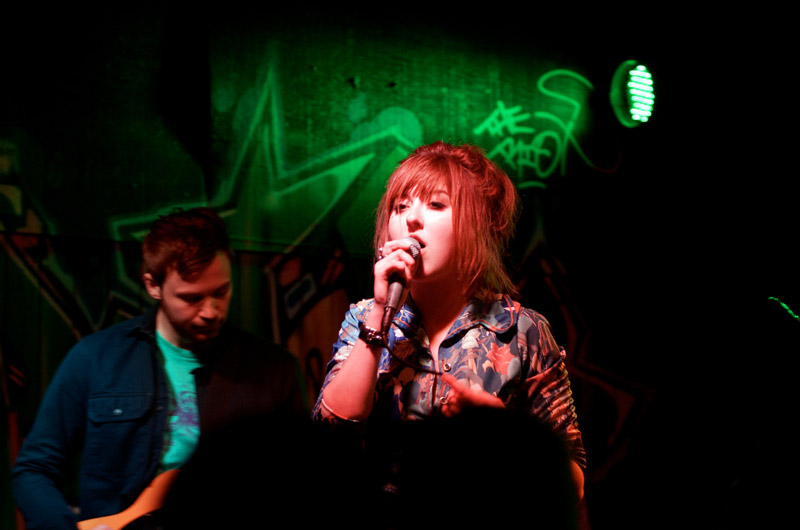 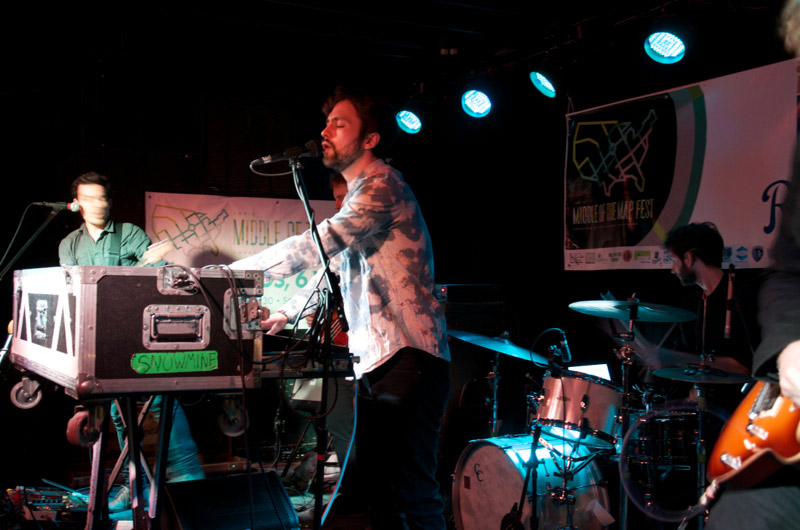 To end the night, we were able to squeeze into Gary Numan’s set, and he proceeded to melt everyone’s faces with a very loud, very rock and roll performance.  He did, however, still play “Cars”, much to the audience’s pleasure (http://www.numan.co.uk). 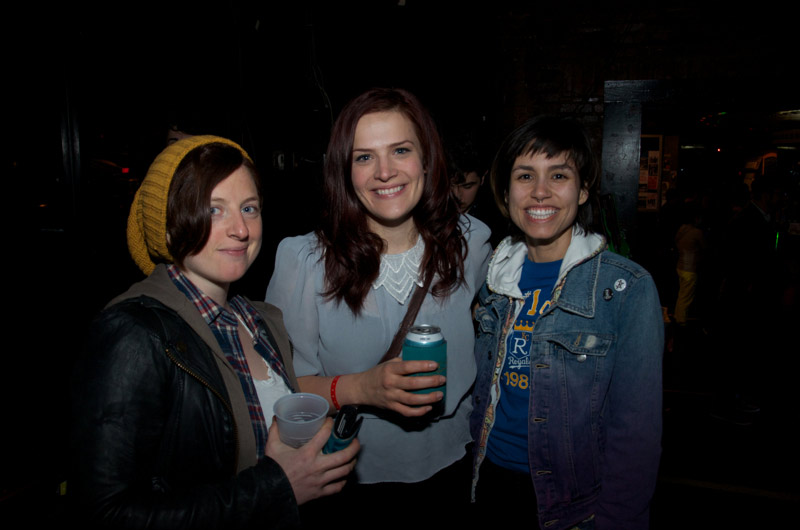 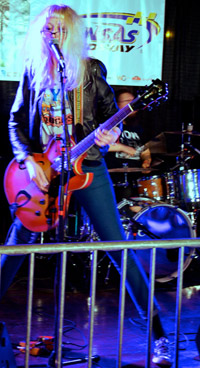 Friday started with electric rock band, Forrester, from very close Lawrence, Kansas (http://forrester.bandcamp.com).  I was then thoroughly rattled by hometown punk rock, The Bad Ideas, and so much shredding (http://www.reverbnation.com/thebadideas).  Immediately following on the same stage was another Kansas City group, Hearts of Darkness, bringing sounds more like funk or salsa.  This is a provincial supergroup of 14 members and is probably one of the city’s most danceable bands.  With five horn players, three percussionists, a conga player, rhythm guitar, bass guitar, pianist, two people on vocals and one rapper, it’s easy to see that the shared talent surpasses the large size of the group (http://www.reverbnation.com/heartsofdarkness). 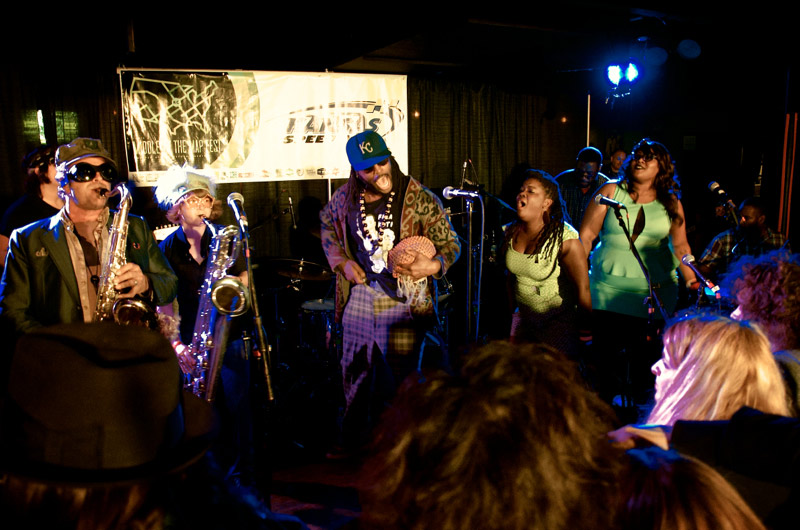 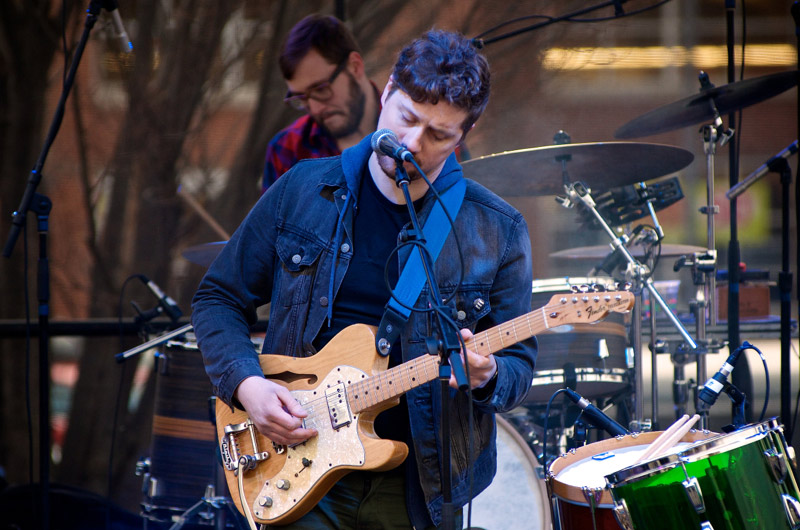 I was happy to see Cowboy Indian Bear, another Lawrence band, take to the main stage early in the evening (http://www.cowboyindianbear.com) before running off to a smaller stage to catch the jazzy duo from home, Victor & Penny, armed with only ukulele and a guitar (http://www.victorandpenny.com). 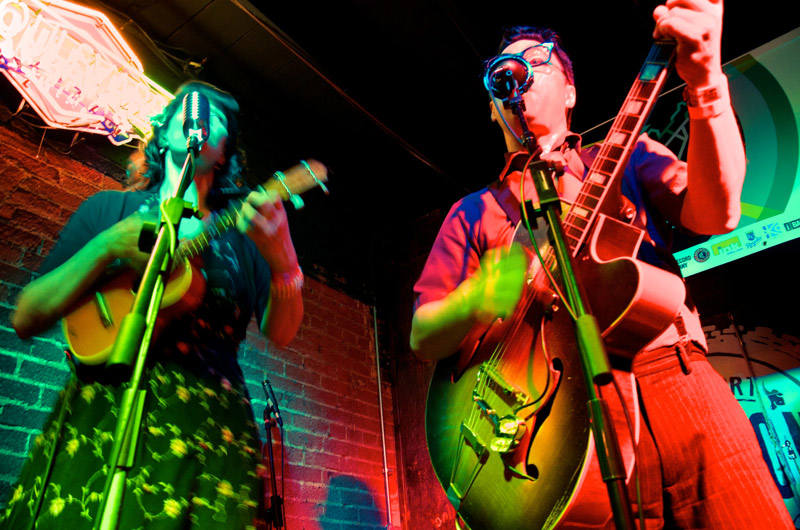 To round out the evening, I was shaken by the explosive Har Mar Superstar (http://harmarsuperstar.com), made a little nostalgic by The Get Up Kids (https://www.facebook.com/TheGetUpKids), and danced my ass off to the very funky Del the Funky Homosapien. 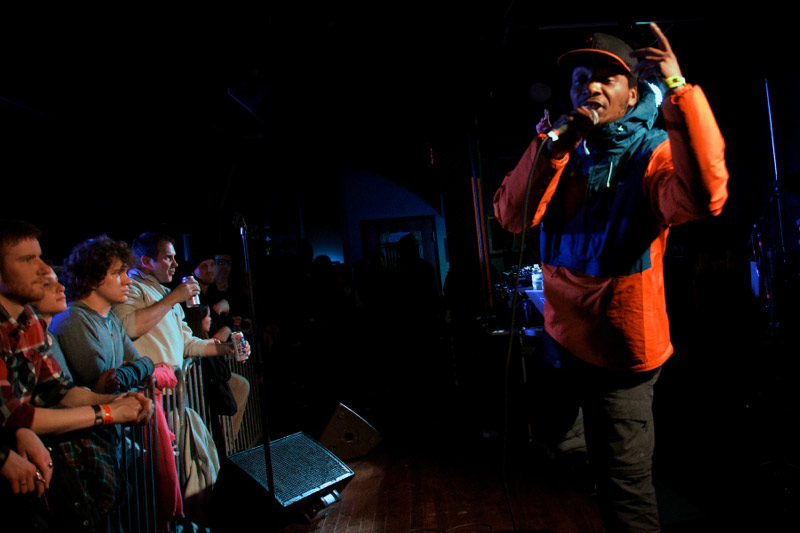 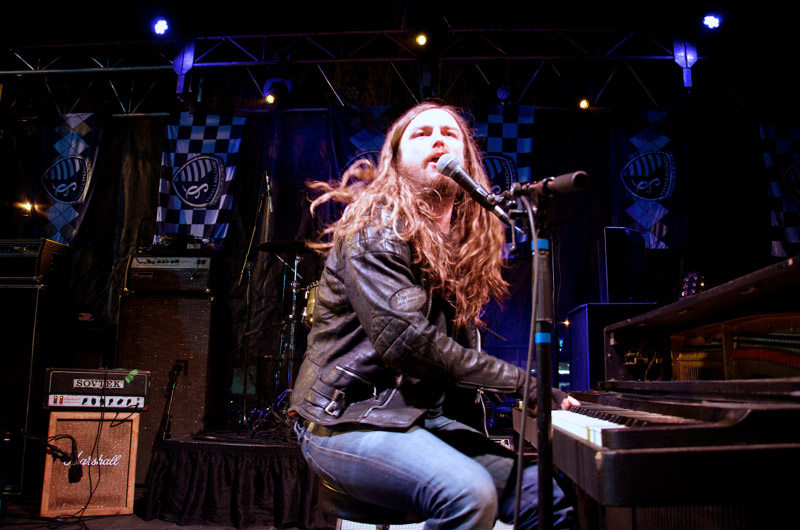 Saturday was the last and longest day, requiring me to mad-dash around Westport to catch even a portion of the bands I wanted to see. 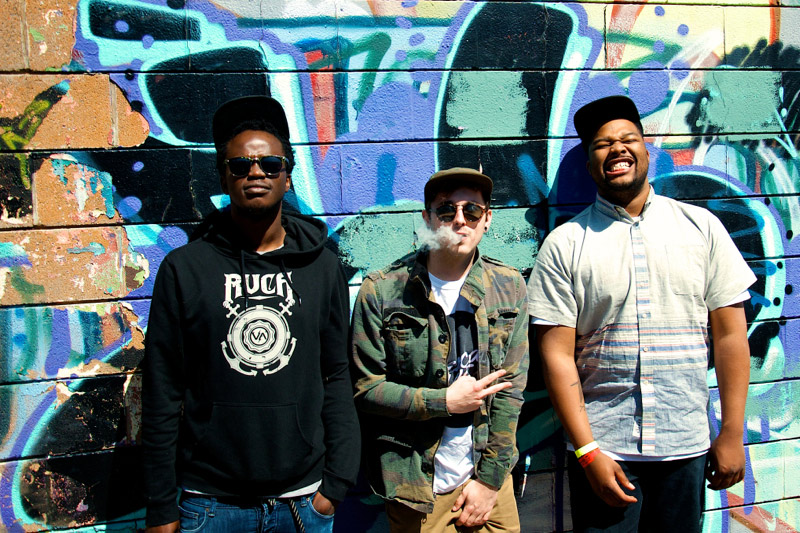 I started my day very early at noon in a warehouse behind Mills Record Store (http://millsrecordcompany.com), whose owner was gracious enough to host an open mic event for Lowercase Kansas, a movement out of Lawrence and headed by Martinez Hilliard, bass player for earlier mentioned Cowboy Indian Bear and performing under Ebony Tusk as a hip-hop artist (https://www.facebook.com/events/639204499430790/).  Lowercase Kansas is an all ages cypher that calls for rappers, singers, spoken word poets, beat-boxers, and b-boys to come out and participate in a community approach to music. 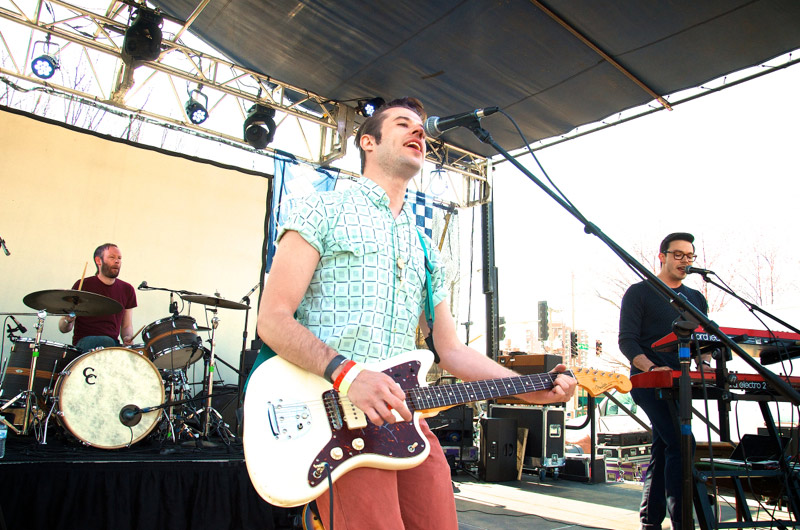 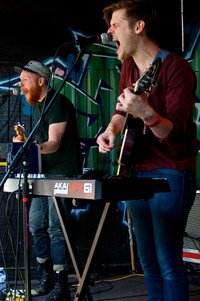 I caught three local rock and roll bands starting with Outsides (http://iamoutsides.com), followed by the very popular Bears and Company (http://thebearsandcompany.com), and two-man powerhouse The Sluts (http://www.reverbnation.com/thesluts).  International act Kishi Bashi was on fire, which gathered a large crowd of festivalgoers to the main stage (http://www.kishibashi.com). 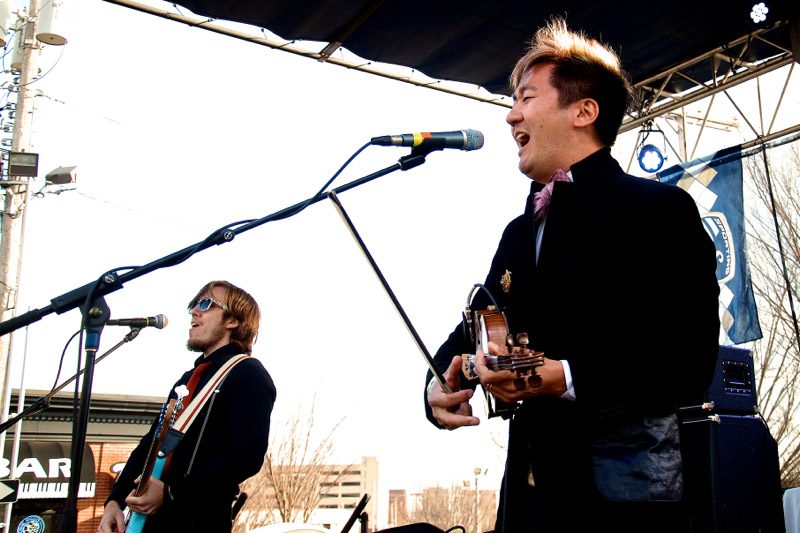 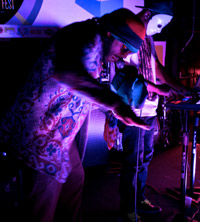 Next, I made the decision to see every single hip-hop act that was performing for the day.  The Midwest isn’t necessarily known for it’s great hip-hop, but it’s definitely here.  Les Paul and his hype man Kwame B. started the set on an outside stage that stayed packed for the entire evening (http://www.mentalhighmusic.com).  Next came M34n Str33t 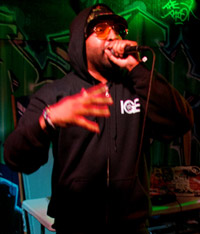 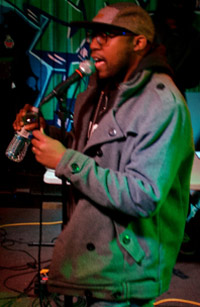 Omaha, who Kansas City was so lucky to have (http://m34nstr33t.com).  Following that was Heartfelt Anarchy, which is another appearance from Les Izmore, also front man for Hearts of Darkness (http://heartfeltanarchy.bandcamp.com).  Then we saw Steddy P. (http://steddyp.com), Stik Figa (http://www.mellomusicgroup.com/pages/stik-figa), and Seattle’s Shabazz Palaces (http://www.shabazzpalaces.com). 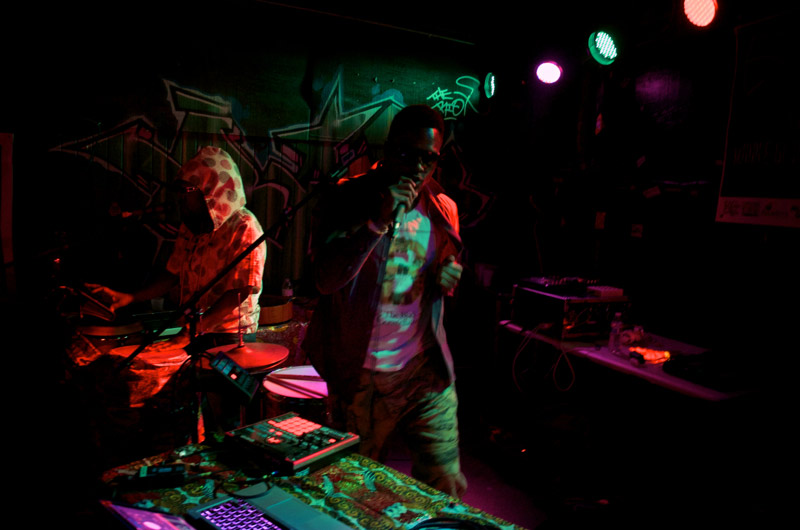 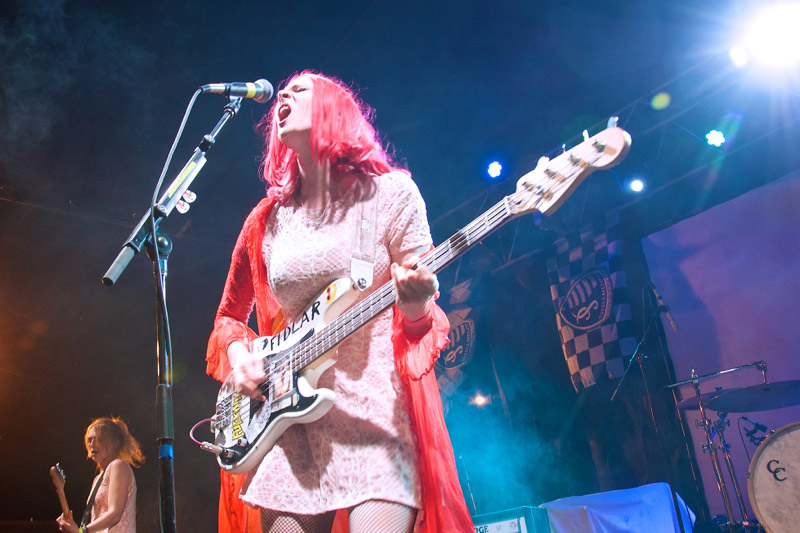 In between enjoying local rappers, I stepped out to watch the very beautiful and rockin’ Kate Nash with her all-girl band and all-pink outfit (http://www.myignorantyouth.com).  On the same stage, of Montreal brought every Kansas Citian to a wiggle, if not a full-on dance (http://www.ofmontreal.net). 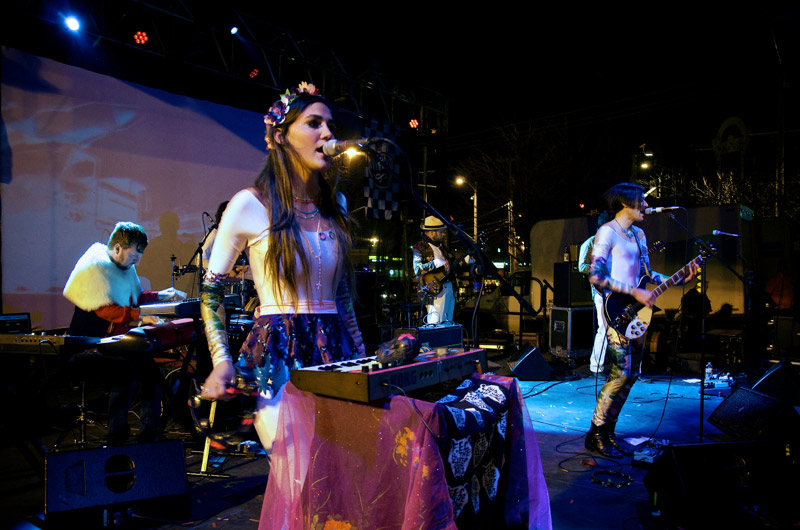 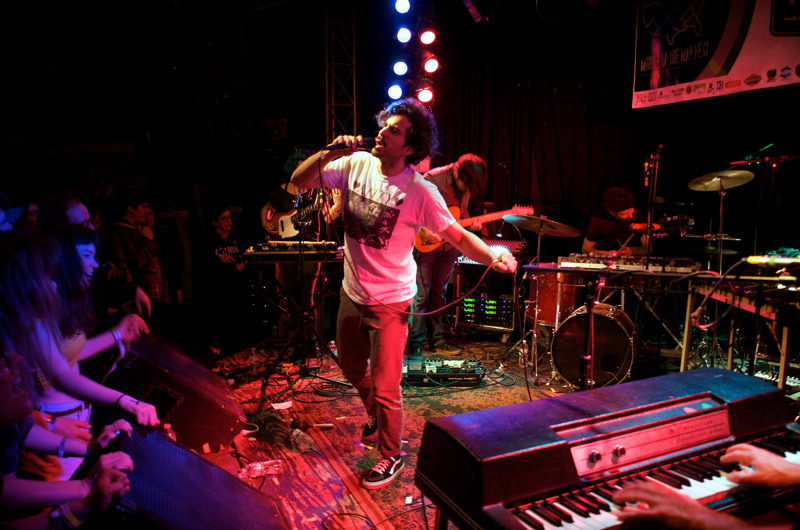 The performance that seemed to be most fanatically anticipated was that of Seattle based band WHY?.  Due to the kind of technical difficulties that are normal to any music festival, the band started 38 minutes late and the entire hour and a half that the band was in the building, the venue was packed to capacity with fans ready to sing every single to every single song, verbatim (http://whywithaquestionmark.com).

After having been on my feet for a 14.5 hours, one may think I was ready to call it quits, but a dance party put on by two of my local DJ’s was an absolute must.  I grooved for two solid hours to the hip-hop heavy sounds of Geesace (https://twitter.com/GeeseLife) and Swaj Mahal (http://www.mentalhighmusic.com/swajmahal/), who easily shared a table and kept the very busy venue dancing. 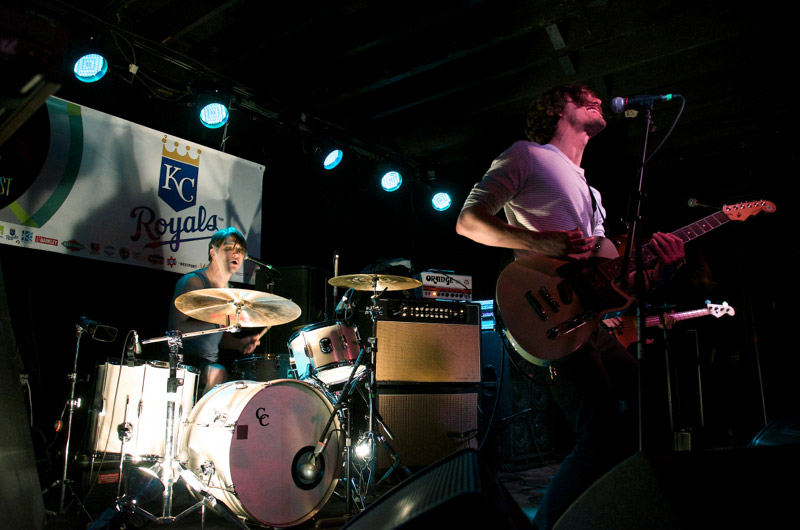 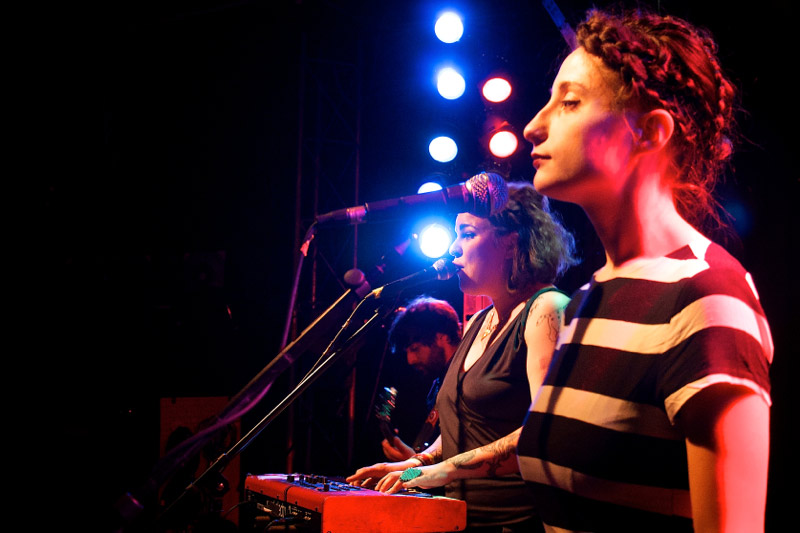