Once again, the Primavera Sound Festival positioned itself as the best and biggest music festival in the South of Europe (as you well know, Glastonbury is bigger, but not...

Once again, the Primavera Sound Festival positioned itself as the best and biggest music festival in the South of Europe (as you well know, Glastonbury is bigger, but not sure at all it is better), Monday to Sunday, May 30th to June 5th.

The mix of people, acts, vending stalls and the proximity with the centre of one of the tourism capitals in Europe is too irresistible to miss, overall at the doors of summer. 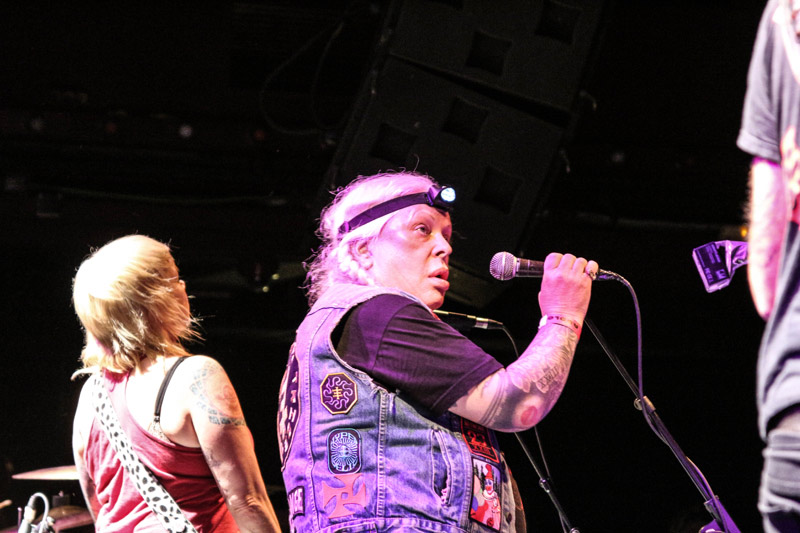 Apolo BCN was the first venue, on Monday, where we rediscovered the experimental dark side of veteran Madrid band Mar Otra Vez, and the Willy Nelson side of Genesis P. Orridge, with Psychic TV (who would’ve imagined that the Lord of Nightmares, the man who sang “Weeping”, could be so positive and hopeful about life?). Two good offering to enjoy up close. Deradoorian on Tuesday was pretty dood, even though the set was kinda short and people didn’t seem to mind her at the very beginning. 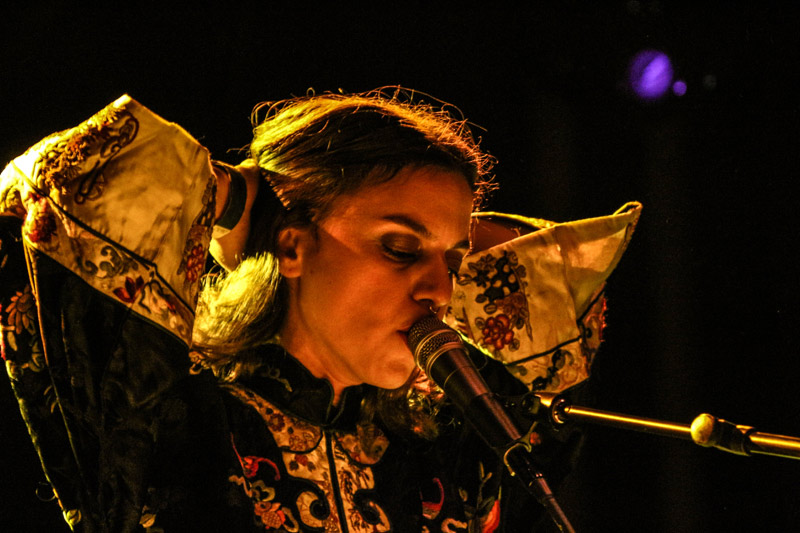 At the Forum on Wednesday, the centre of all action, Suede confirmed that their new lease of life is just as convincing as the previous one, if you want Brit-pop with a tinge of glam. 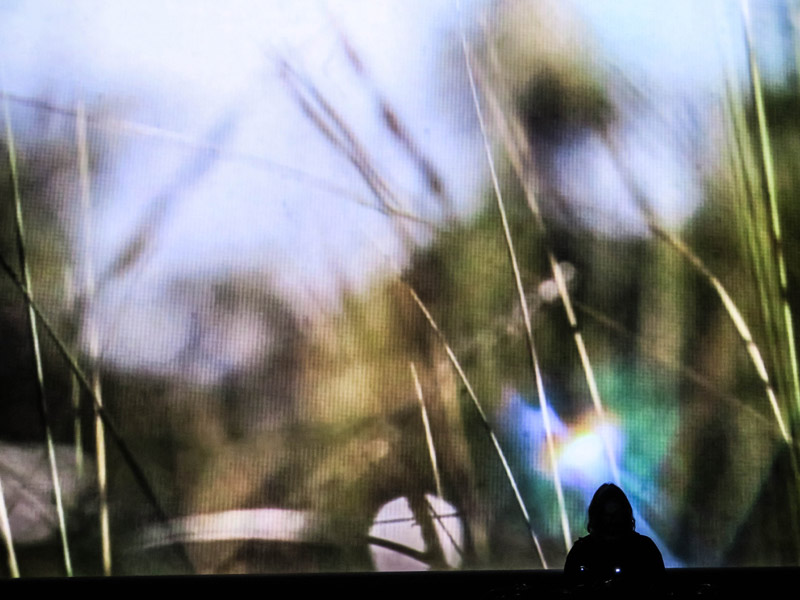 Alessandro Cortini opened fire at the Auditori, on Thursday afternoon. The Italian painted some incredibly interesting landscape, like he was an updated and vigorous version of Fennesz or even Coil (follow him, please). Car Seat Headrest proved they have a wide range of choices to evolve from (Lou Barlow, Beck or even Pavement are clear references); they’re not that hype as one might suspect. 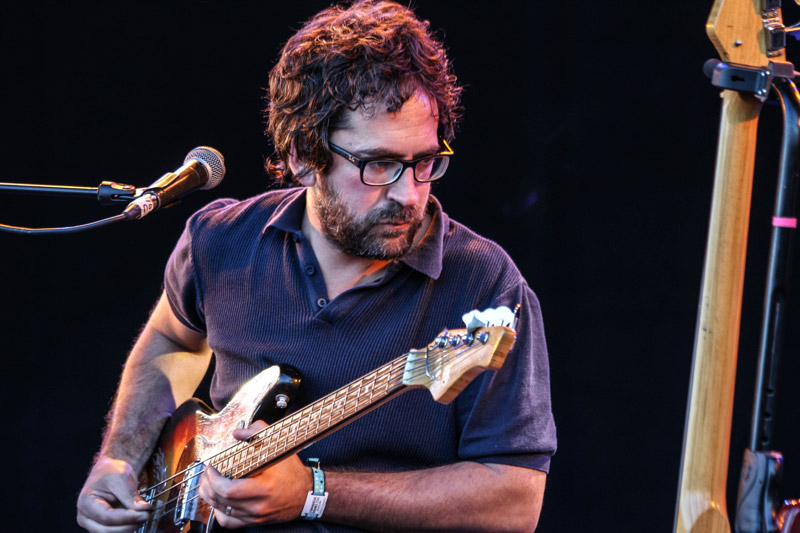 BEAK> were by far the best experimental band of the bunch you could find at the Primavera. Austere, fun, psychedelic, cosmic and with that ease to display English humour, Geoff Barrow, Billy Fuller and new recruit Will Young (formerly of Moon Gangs) can play in a club or in front of the Primavera large crowds and still make it work and make people enthusiastic about the music, not what surrounds it. 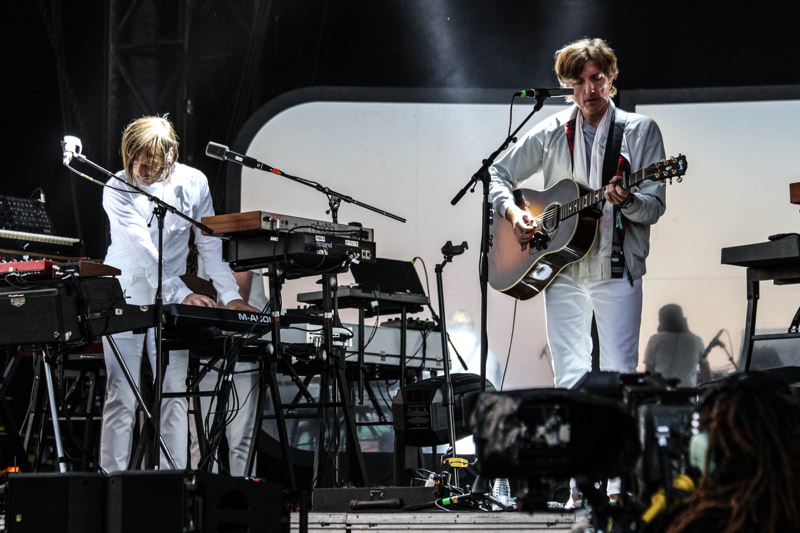 Destroyer were, once again, just correct; Air just keep playing the same kind of thing over and over and still gather large crowds; Thee Oh Sees seems to have indestructible energy, maybe even too much (John Dwyer was barely audible); and LCD Soundsystem were massive but… it lacked something; and Daughter were totally right in giving their tunes a more atmospheric feel that suited the biggest stage of them all. 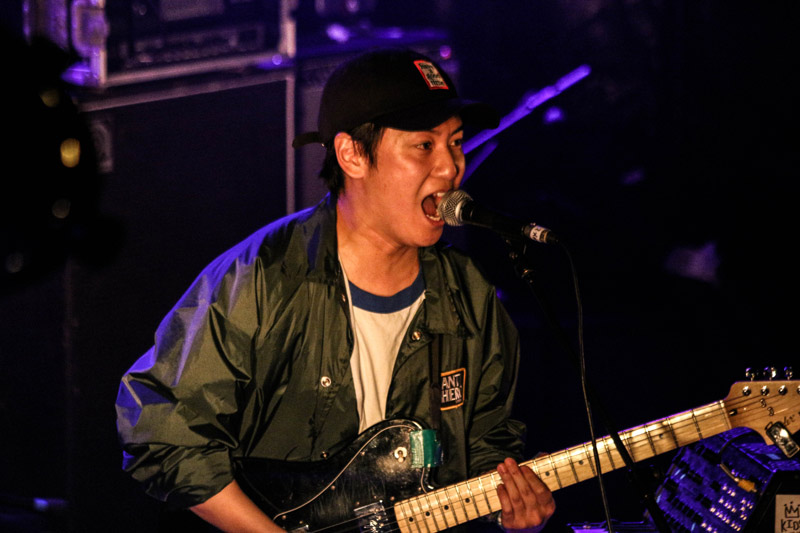 And a super fun band: DTSQ, from South Korea. 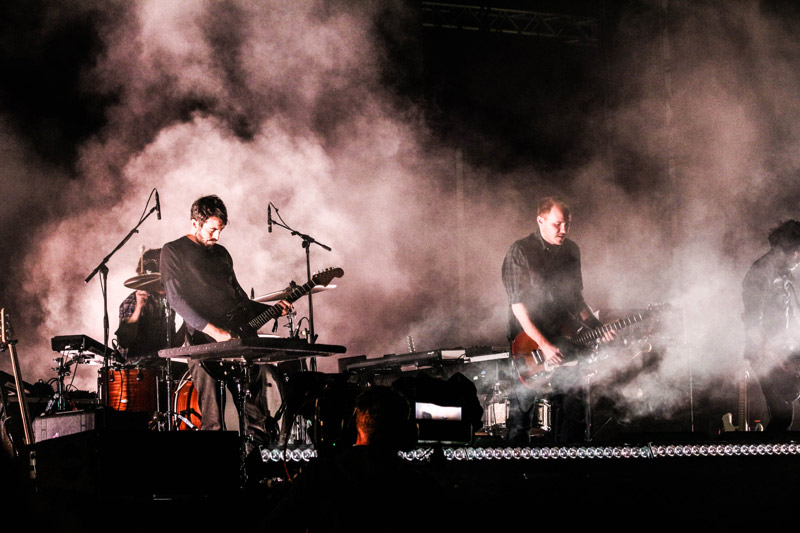 Explosions In the Sky played no tricks: their latest record, The Wilderness, is still deep in the post-rock concept, but with a whole range of new details and sounds that break with their blueprint of crescendos and… yeah, explosions in the sky. But they have been clever enough to keep a link that makes their live sound a whole. The clearest examples were new composition “Disintegration Anxiety”, followed by classic “The Only Moment We Were Alone”. The former, an observational account, the other a true fighter. Wow.

But the most surprising gig of the PS ’16 was… John Carpenter’s. Yes, THAT John Carpenter, the guy who creeps in your sleep, who taunts you with images and sound, the filmmaker of the dark side. 68 years old, cool as a really, really big F, a man who can tell you about everything he has done in the easiest and uncomplicated of ways, without bragging (“In 1982 I made a movie called The Thing” and a thunderous ovation followed), chewing gum all the time, him and the band putting some sunglasses on when they start playing “They Live: Coming to L.A.”… “Vortex”, “Mystery”, “Big Trouble In Little China: Pork Chop Express”, “Halloween’s Main Title”, “Christine Attacks”… Really, if you haven’t seen him live, yet, do it. “Horror movies will live forever!!” Amen to that. Unending class. 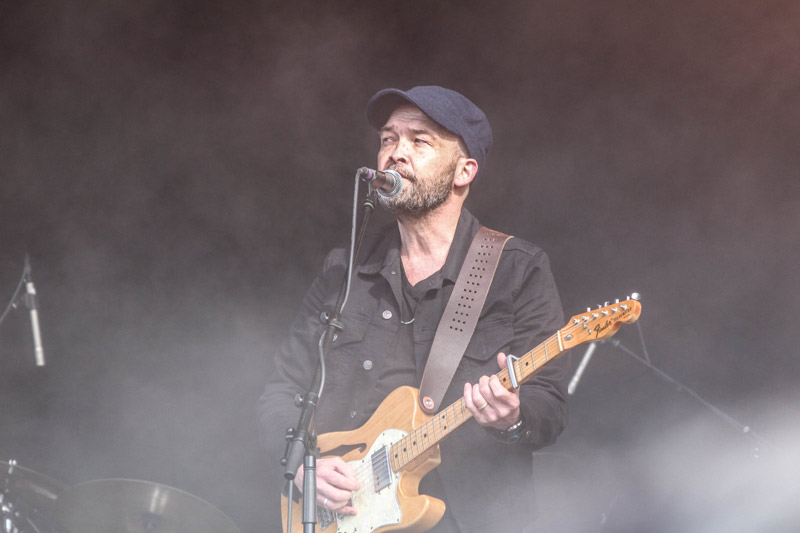 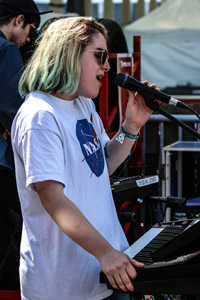 Shura is one of the new defender of the synth-pop of the ‘80s. Uncomplicated, refreshing and solid, she can get really far. Ben Watt brought his band, which featured Suede’s Bernard Butler and offered a recount of his vision of America’s art-rock and folk mixed with some classic ‘60s British pop that, although nice to hear, would’ve worked better in a club. Then, Cabaret Voltaire played an electronic, pre-recorded set, supported by a set of images of war conflicts and politics, which was underwhelming. 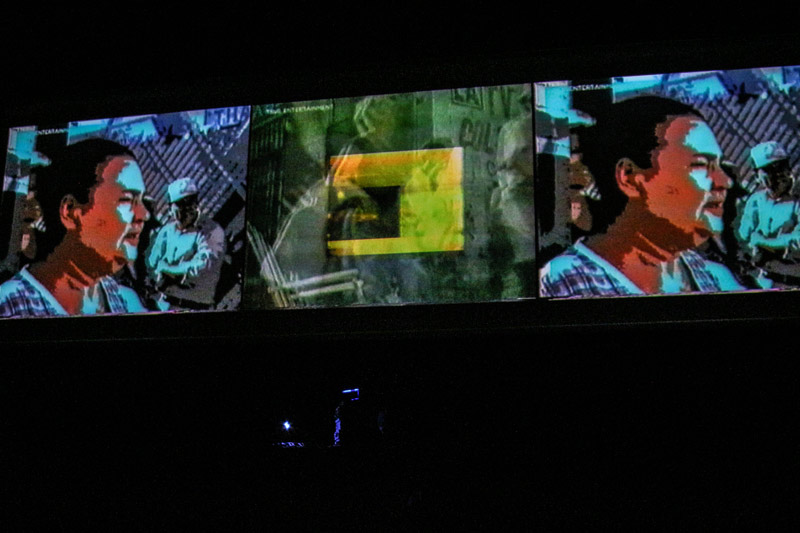 Now, Savages quadrupled or even more the amount of people they played for, compared to their 2013 debut at the PS (QRO photos). The new album (QRO review) sounds way better live, but I still feel there’s something missing. Singer Jehnny Beth tries and tries, jumps onstage, offstage, onto the audience, want to be close… but somehow it doesn’t feel right. There’s still a certain coldness to them, which is a pity because, when you talk to them – like I did at the 2014 Le Guess Who? Festival in Utrecht (QRO recap) – they couldn’t be more charming. 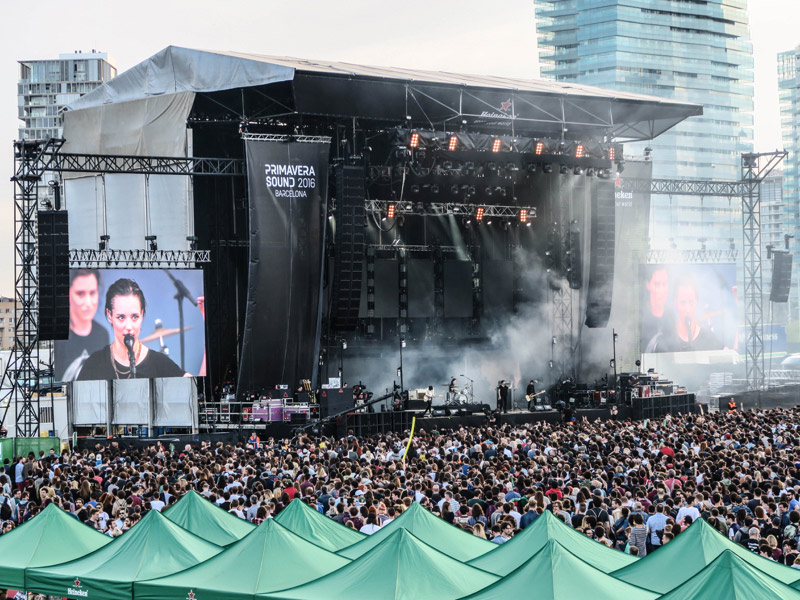 Aaaaaaah, Beirut. They are not as debauched (so to speak) as before and sometimes they’re too mellow, but still good fun to watch and to absorb their folk melodies. And Zack Condon still sings really beautifully. A good example on becoming a veteran band with grace and charm. 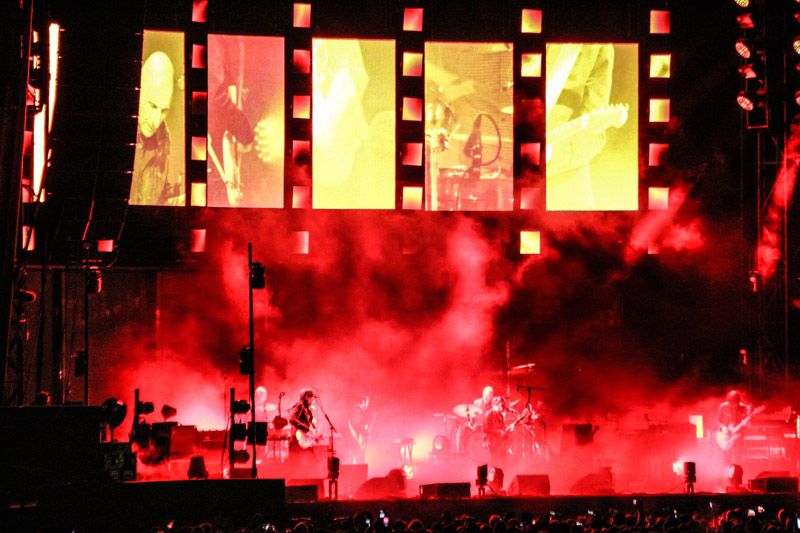 Radiohead: The audience chaos. Much probably the gig with the biggest attendance in the history of the Primavera Sound. Rumours of up to (and even more than) 40,000 people attended the gig, so most of the people just listened to the band. The set list was impeccable: songs of each of their albums, of all moods and kinds, the ‘Greatest Hits’ compilation many a record label would love to release. And yes, “from each of their albums”, meaning they played “Creep” as the last encore, when it wasn’t supposed to be. The only… I won’t say fault/mistake/bad thing but one song that felt out of place to me was “Street Spirit (Fade Out)”. It’s an incredibly beautiful song yet also one of the saddest you will ever hear. And it must be heard when everything adds up and you can’t be sunk by it. If you play it in a festival, it’s going to crush you. And, indeed, it crushed me.

Dinosaur Jr., Tortoise and Shellac were the victims of the Radiohead tsunami, but they all played sets above average, especially J Mascis and co (who followed with great interest the Savages’ gig), who were explosive, as usual with them.

The end of the night belonged to Animal Collective (never got them, and I don’t think I’ll ever will, after their gig in Barcelona), The Last Shadow Puppets (bland, but they played right after Radiohead, so they may have an excuse), Beach House (brief set, but worth nonetheless), and Kiasmos (always worth). 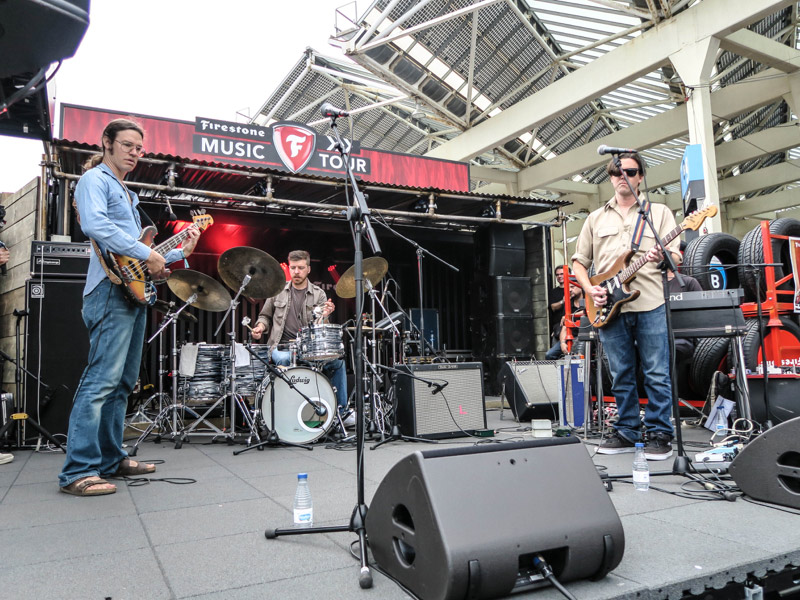 Cass McCombs played a four-song set at the Firestone stage of relaxing ‘70s American pop, featuring “Opposite House” and “Run Sister Run”. A perfect way to recover from the hangover. 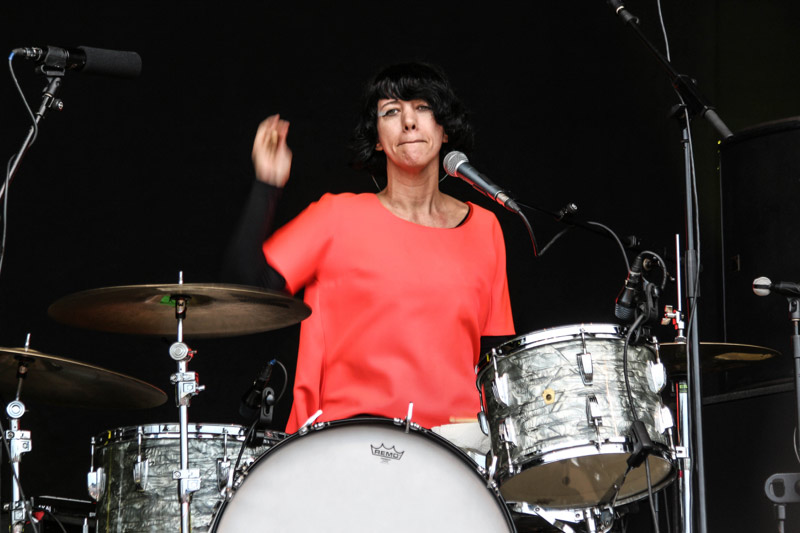 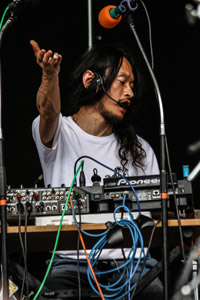 Boredoms were the real outsiders of the festival, with their double drum set and their forward thinking disposition towards music (if that makes any sense). Autolux followed them, in their first appearance in the festival since 2008. They delved into their noisier side and completed a really good set. Old numbers “Subzero Fun” and “Blanket” merged beautifully with newer tunes like “Listen To the Order”. Hopefully, all their parallel projects will leave them some time to fully develop their latest offerings. 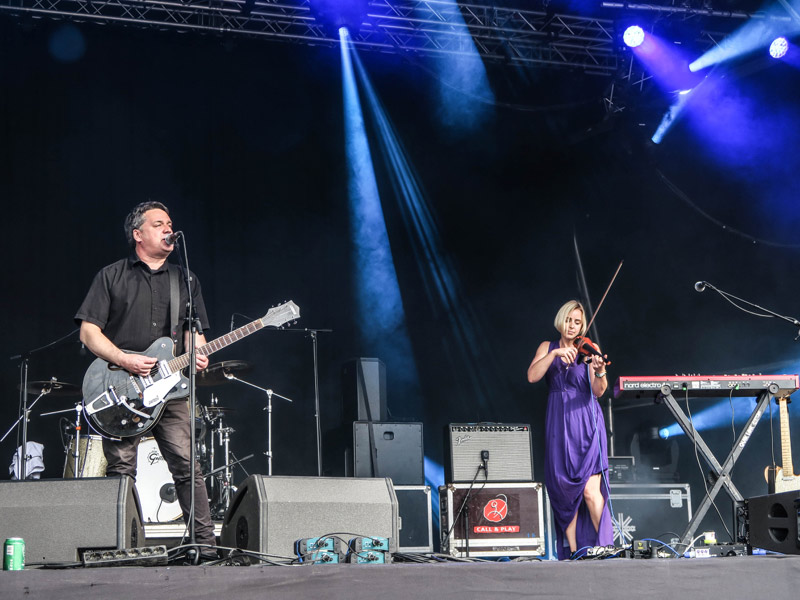 The Chills finally debuted in Barcelona, 36 years after their debut in New Zealand, with their shiny, melodic pop; Brian Wilson and co. the essence of the ‘60s surf pop were basically correct, but one suffers for poor old Brian, as sometimes it seems he doesn’t want to be there. And Jenny Hval were outlandish in their clothes and in some of their songs, but pretty effective when their electronic pop held onto the melodic side of it. Fun and more interesting that they seemed at first. 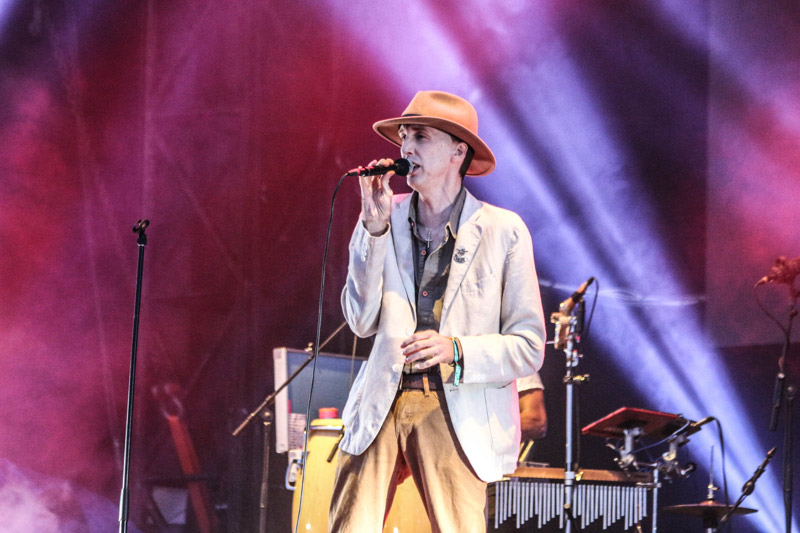 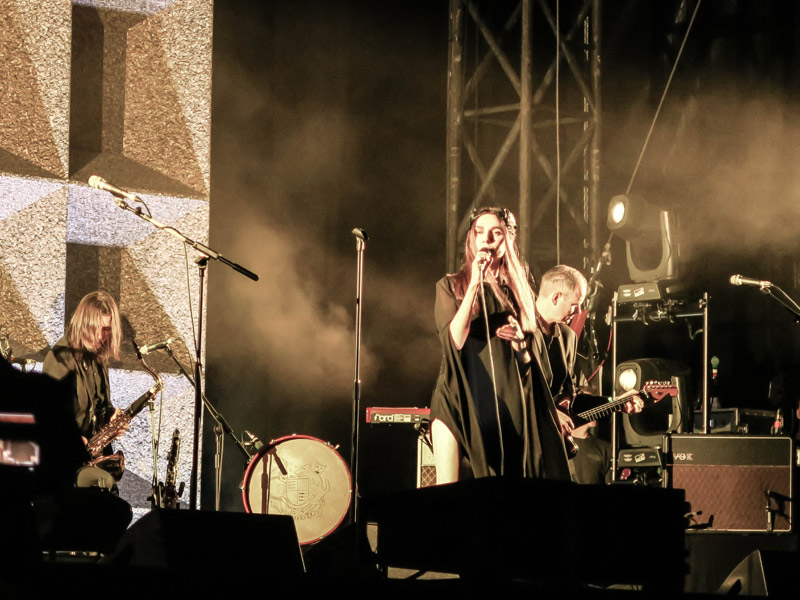 Then, another huge display of class. PJ Harvey led a nine-piece band, with long time collaborators John Parish and Mick Harvey among them. Her new work, The Hope Six Demolition Project, is political, universal in its pain and compromised with the injustice millions of people are living nowadays, but Harvey is so intelligent it never sounded like cheap, demagogic propaganda. She was and felt exuberant but she never needed to be fierce, or go to the point of being dangerously over the top. The band was strict in its playing but not mechanic, and Polly Jean was humble enough to acknowledge them to even stay behind them, when she wasn’t singing or playing. She was critical with the current situation of the world, but she was thought music, through art, she used the tools she knew and made the most of them. The woman/artist Jehnny Beth should look upon.

Sigur Rós were majestic as well, although in their imaginary, epic way, Ty Segall was crazy (more about him in a minute), and Julia Holter felt more dense and profound than on record. A surprising, positive change, in case you never saw her live. 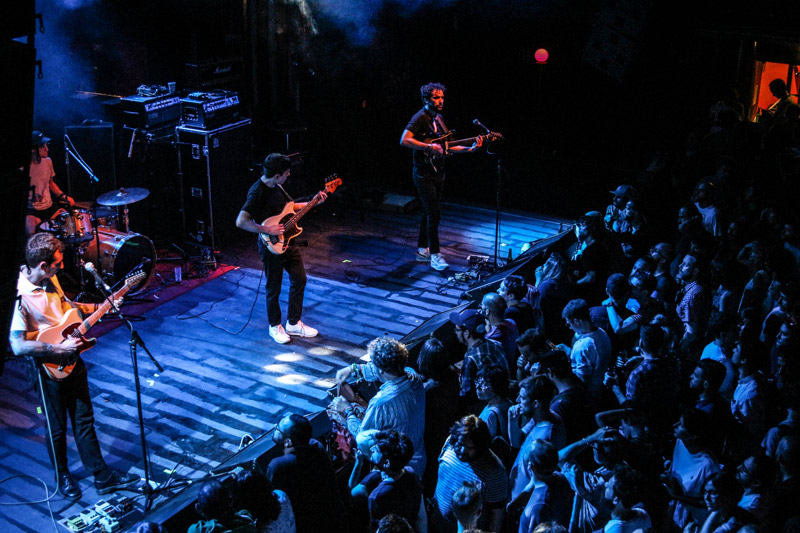 Just two brief mentions, one for local band Univers, whose shoegaze reminiscent of The Jesus and Mary Chain, was a breath of fresh air regarding local musicians; and Ty Segall & The Muggers, who were incredibly good, sweaty, fun, precise, noisy, upright, virtuous, raucous, sticky, unruly, and almost incontrollable. No more prejudices over him/them, anymore. 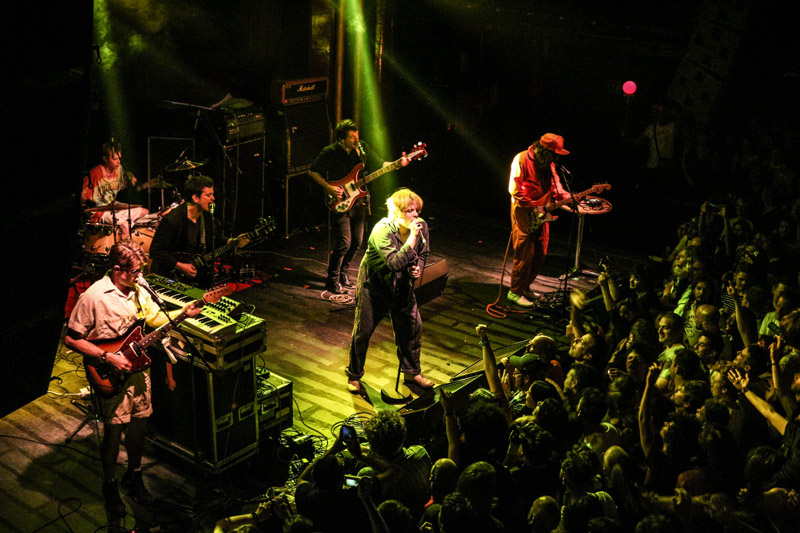 So. Music quality? Always good, as usual. Sound quality? Despite some little problems, even better than in previous years. People? Too many! How did the organization cope with the fact that, sometimes, the PS looked like Glastonbury? Really, really well.

This is the place to be, at the beginning of summer.