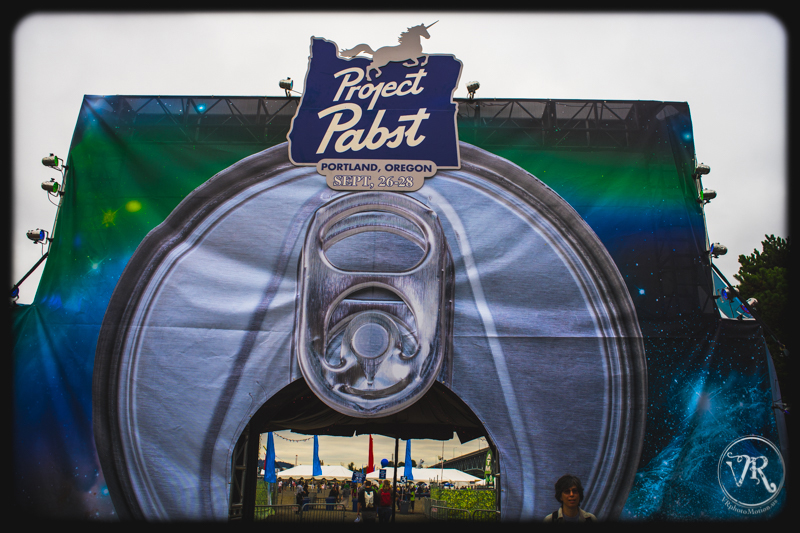 Click here for photos of festival sights at 2014 Project Pabst in Portland, OR in the QRO Concert Photo Gallery 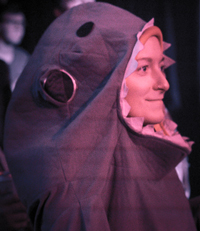 When one finds him or herself in a crowd next to an individual dancing carelessly in a shark outfit to the pre-after-hours kick off to the first annual Project Pabst Music Festival – well, you know you’re in for a weekend full of surprises. And as recent news revealed that the 170 year-old brewing company is now under Russian corporate control; hipsters, casual and seasoned beer consumers, and those simply out for a good time can rest assured that Pabst’s refreshing direction as a brand and experience has made it’s presence known – with a well-earned Monday morning hangover to prove it. 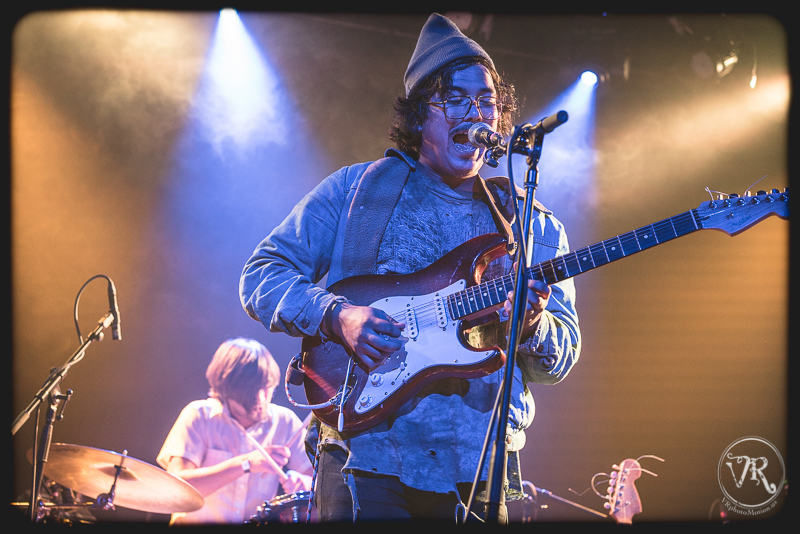 Even though the after hours shows, dotted all about Portland’s renowned catalog of venues, were not included in the South Waterfront festival ticket price that spanned a semi-crisp and luckily dry late September Saturday and Sunday – the lineup of breaking-out, broke-out and coming-back-again acts present in the finely crafted schedule ping-ponged most between the two main stages in a delightful drunken shuffle of joy and manageable levels of intoxication due to the over-twenty-one policy.

While the after hours shows allowed for groups to pick and choose how they’d like to boogie their nights away, the main festival presented an array of palatable performances all the same, benefited by the unabated nature of outdoor acoustics and a location lined with captivating views of the cityscape, Columbia River, a giant unicorn with a glowing horn and fifty foot face that gazed back at you in a pleasantly buzzed satisfaction on either side of the main stage. 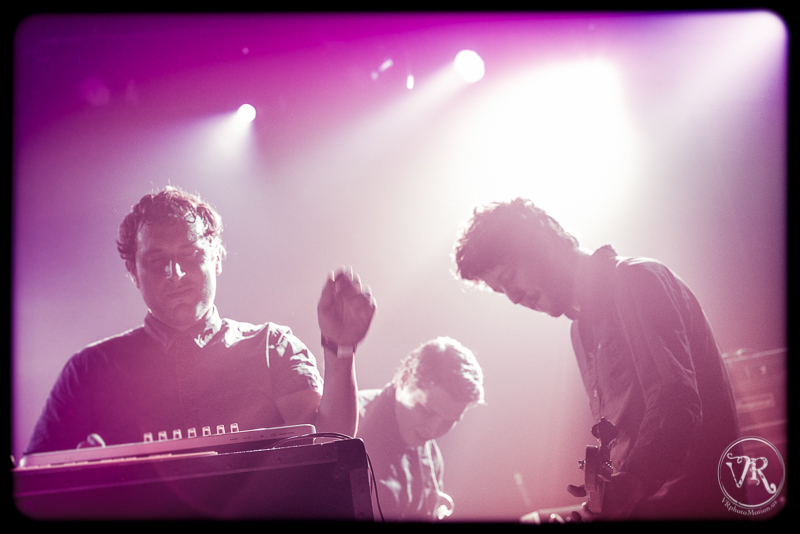 Friday night we chose the Wonder Ballroom after hours show beginning with Animal Eyes and escalating into Small Black and Menomena, all of which were well-crafted musical acts that presented with its’ own unique approach to the wonderful real of music.

From the first bound of Animal Eyes’ engagingly placed accordion measures and well-structured harmonies, already familiarized on-lookers sang along with them till the last reverbing slap of Small Black’s impressive bassist. The base lines beat their way through battered ear canals of blissful concertgoers. And this was just the end of the beginning, as Menomena’s smashing saxophone placement and fully fleshed out vocals belted overtop some of the most unorthodox and refreshing arrangements ever. Their unique style, like playing the Muppets’ song “Menomena” on repeat for six minutes before hitting the stage is tantamount with their unique arrangements and energy found. 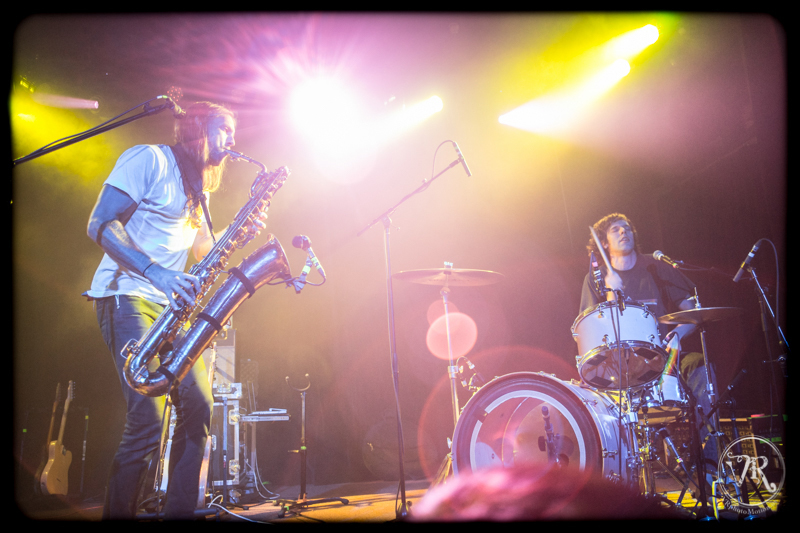 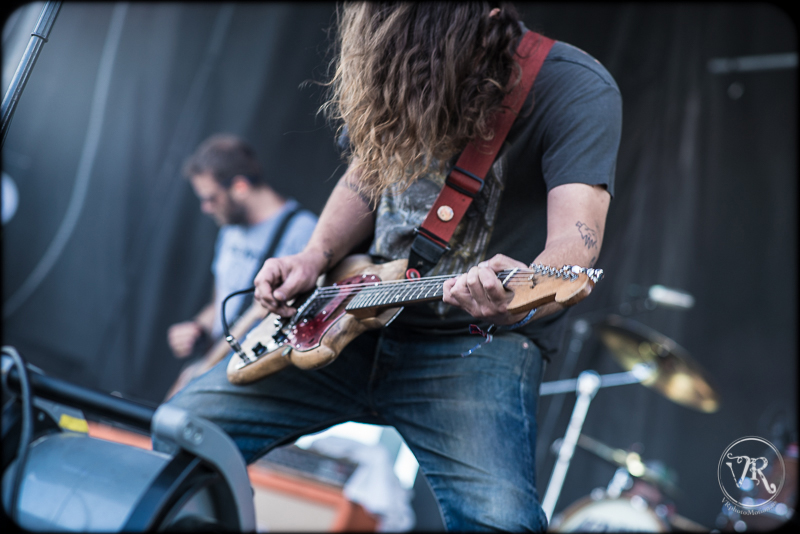 As Saturday afternoon arrived, the entire waterfront dotted itself with a maze of celebrations for hemp and the coming marijuana legalization efforts on this November’s ballots. In approaching from the colorful sights of North Waterfront Park, finding the tucked in festival between OHSU’s dentistry campus and the Ross Island Bridge presented a more fitting color scheme for Portland’s coming winter foibles. In adjusting to the protruding nature of the stony grounds, the modest approach to Project Pabst’s first go around was one with naturally rough edges that added more to it’s charm than what it took away in the end. 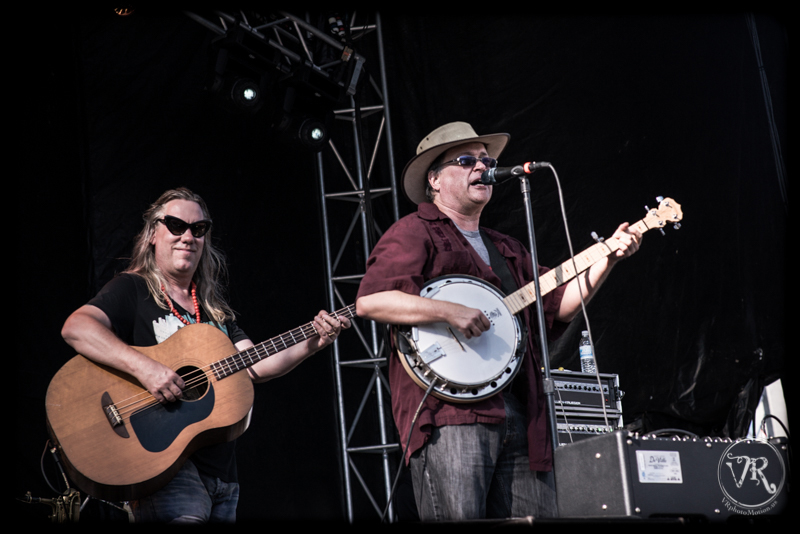 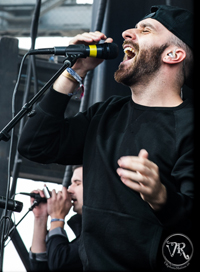 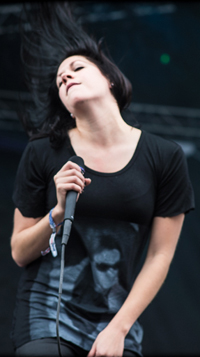 Despite a few glitches in the wiring, X Ambassadors followed up K. Flay’s slick beats and lovingly dreary lines of yearning like, “Suckin’ on a bottle of Jim Bean – wishing it was you” [Pabst, that is.] with a 180 in direction and style that somehow came off overly enthusiastic – if that could actually be considered an issue. As such, the afternoon’s highest of light was coveted by Violent Femmes’ brazen retreading of the now 31-year-old self-titled debut album that satisfied those itching for the notable hit “Blisters in the Sun” within the first minutes only to be enlightened to the greater greatness of this Milwaukee-born group of rabble-rousers. 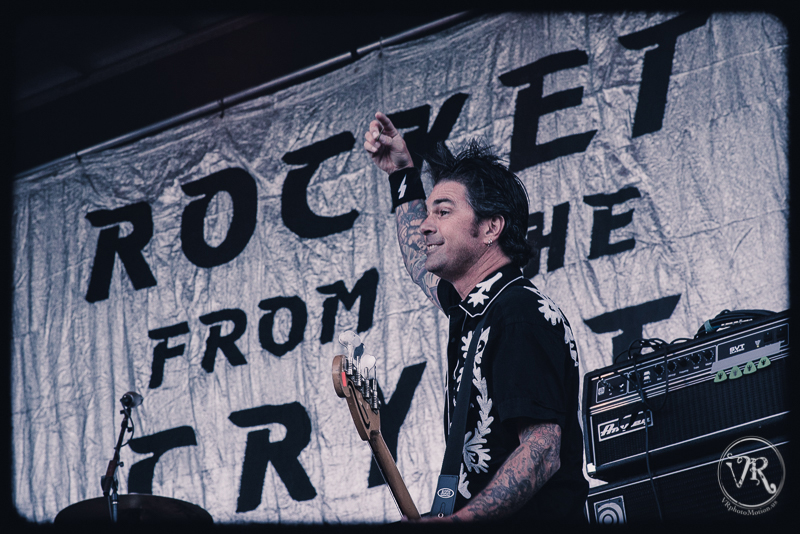 More than anything, as Tears For Fears closed out the main festival’s first night, generations combined for an altogether nostalgic initiation to Project Pabst’s diverse mixture of seasoned hits and mood music to engage in everything from Giant Jenga to a free run at Ms. Packman set under the trance-like ambiance of the Arcade Tent’s lavishly lit ceiling and bouncy plywood bottom. 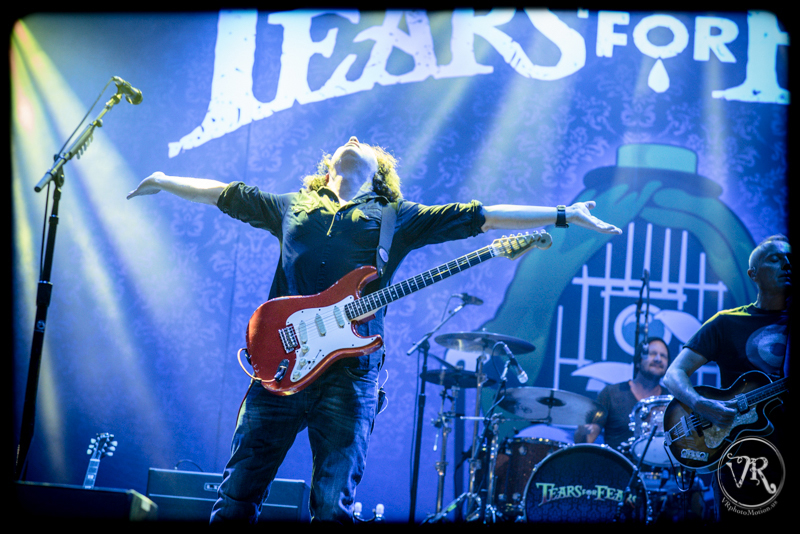 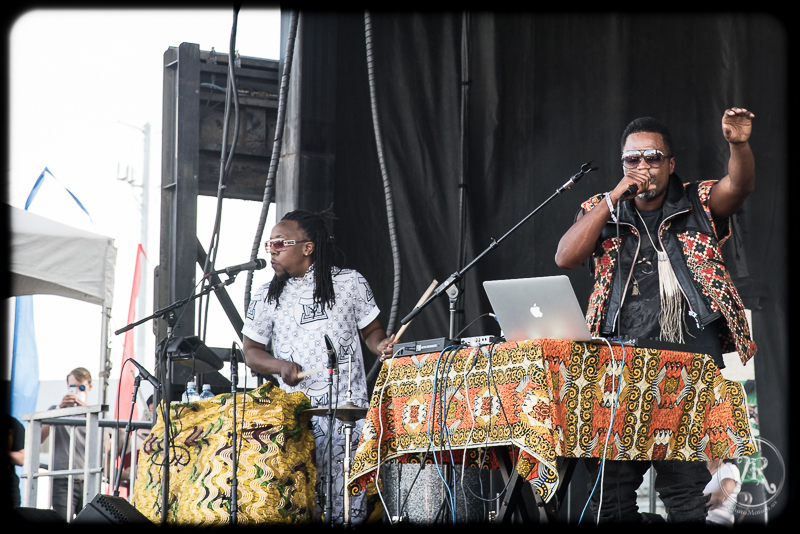 Once the counter-intuitive nature of day-drinking on a Sunday subsided for the final day of musical engagements, the pleasant weather and gauntlet of lively acts yet to be confronted left little rest for the wicked about. With only corner patches of grass and a gingerly placed assortment of benches and tables to plant it for such ordeals like that of the locally sourced dining options available – by the time the sun had started to set in heated fashion the tallboys merely hydrated fellow festival-goers against the backdrop of Shabazz Palaces psychedelic set of ambiguous utterings coupled with a rich tapestry of samples and soulful yet not quite R&B breakdowns. Another sharp departure from The Thermals rough and raw rock that preceded Shabazz Palaces just as much as Lord Huron’s bubbly midwestern charm followed it.

As soon as the last flock of those putting their time in as part of the cult-like following of Wu-Tang Clan and it’s affiliate, GZA, the rambunctious and oddly educational set cranked up the energy far past buzzed, however; as the crowd waved W’d hands about in passionate acknowledgement of every effortlessly put bite of harsh realities and better ways – leading all to the fruit of their labor in baring the force of unfathomable decibels of bass for the past few days: Modest Mouse. 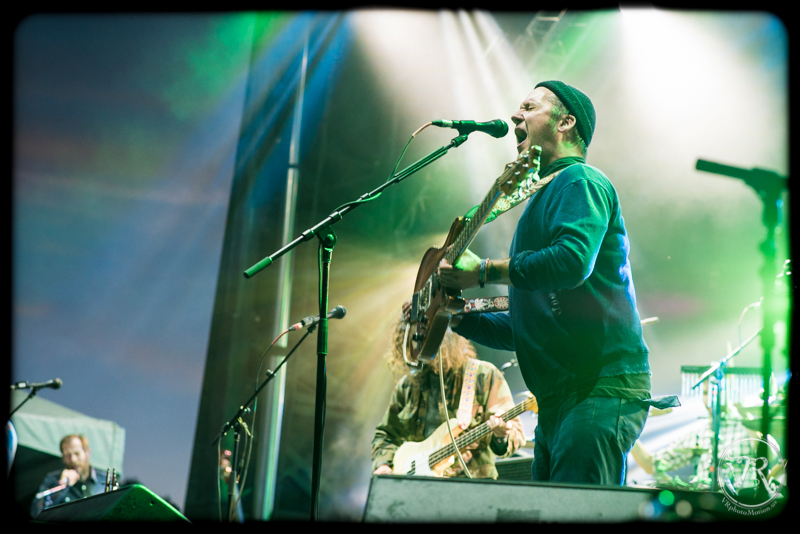 With a well-received emphasis on The Moon and Antarctica, Modest Mouse came out in full force with orchestral elements to spare. As two drummers pounded away to the revved up retelling of “Tiny Cities Made of Ashes”, the two-hour set inducted those into the deep catalog of gems that make up the mythology that is Modest Mouse. From the initial fit of “A Different City” to the tuned down tempo and orchestral accompaniment of “Wild Pack of Family Dogs”, Isaac Brock shined in a seasoned and all around rowdy fashion. More still, as the finely tuned elaborations of “Night on the Sun” and “Doin’ The Cockroach” built up and busted through the jovial minds lost in sound, well-placed hits like “Float On”, “Fire It Up”, and “I Came As a Rat” tied the night together in engrossing splendor to those that have long missed the captivating presence that such well-constructed arrangements, thought-provoking subtext found in the encore’s satisfying conclusion that quite properly relates the experience of the Pabst Project experience through the  ”The World At Large” and it’s fitting lines, “The days get shorter and the nights get cold / I like the autumn but this place is getting old / I pack up my belongings and I head for the coast / It might not be a lot but I feel like I’m making the most.”

And if anything, Project Pabst made the most of a beautiful autumn weekend the likes of which are more than welcome in the years to come. 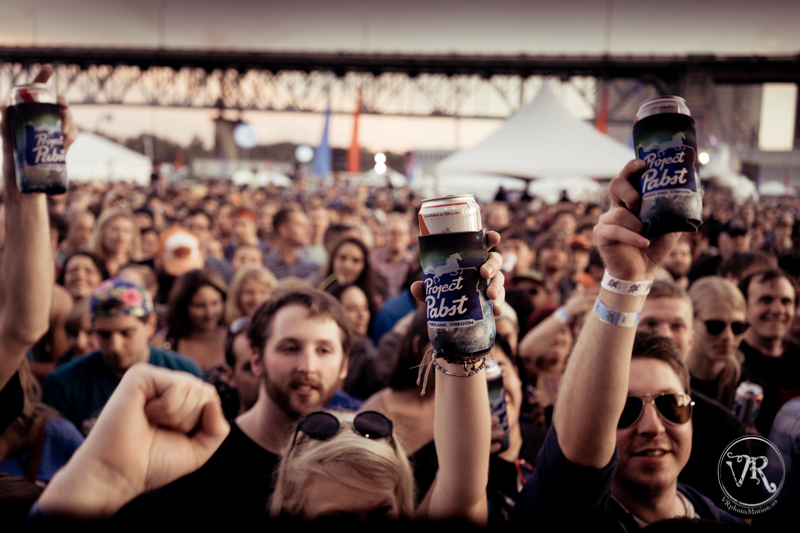