The third Shaky Knees, Friday to Sunday, May 8th-10th, was the first one without rain.... 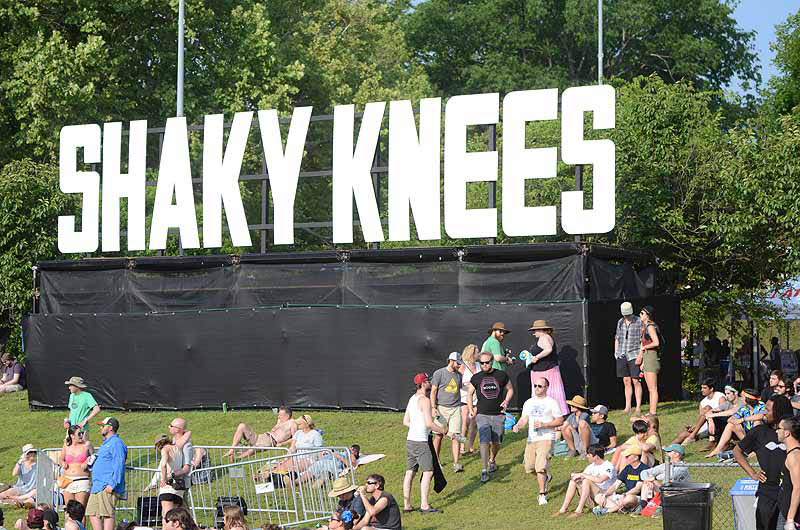 The third Shaky Knees, Friday to Sunday, May 8th-10th, was the first one without rain. Since it was held in May, the heat and humidity had already arrived in Atlanta, and after Friday, many retreated to the shade for refuge. There weren’t any mist tents, but there was free water and reasonably priced alcohol drinks ($7-9) and juice/bottled water/Coke products ($4). Dos Equis sponsored the event again, and had its own bar set up by the secondary stages. VIP was a good deal with two buffets at lunch and dinner and alcohol available freely.

Atlanta’s Manchester Orchestra played cool jams of mixed rock and folk sounds with delicate, off-kilter singing during an afternoon set. There was a “COPE” sign onstage, representing the band’s tour and album name (QRO review). The best jam of the set was the extended version of “Everything to Nothing” which had some hard-hitting, heavy bass lines which added serious dynamics to their usually laid back style.

TV On the Radio 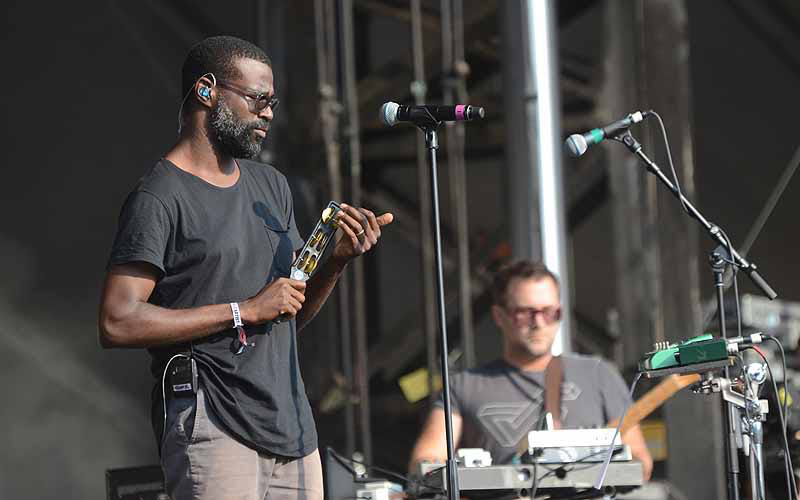 A seven-person version of TV On the Radio played its tense alt-rock in the sun under purple and green lights, promoting the latest album, Seeds (QRO review). The lead singer controlled the crowd well by pacing back and forth while singing in front of the stage, using fluid hand motions and jumping up and down to the music. Most of the eclectic Brooklyn band’s danceable songs had a faster pace and higher pitched vocals, but there were also a few slower, ambient songs with lower vocals. 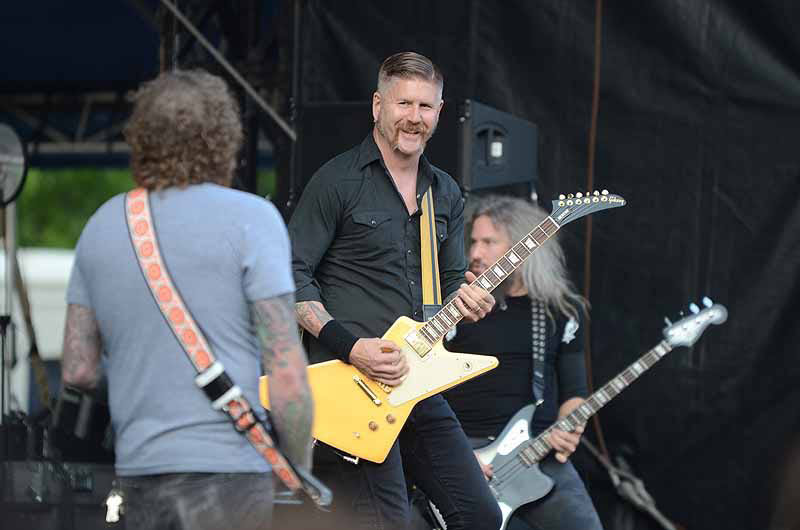 Atlanta’s best metal band, Mastodon, entertained the hometown crowd in front of its Once More ‘Round the Sun album cover as a backdrop. Lead guitarist-singer Brent Hinds smoothly soloed on several high end, mostly Gibson guitars, including a Flying V, a double neck, and a blonde and white guitar that had triple pickups. Bassist-singer Troy Sanders head banged, his gnarly grey hair and beard in tow. Bill Kelliher was on rhythm guitar, using wonderful wa-wa effects on his Gibson. Drummer Brann Dailor sang backup, as well as Kelliher. During the set, a small mosh and crowd surfing pit cropped up in the audience. 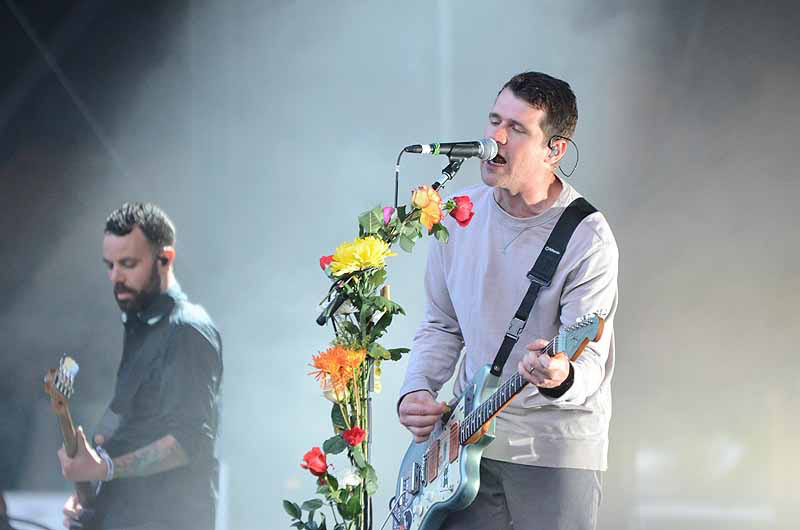 Brand New performed under moody blue and red lights. The diverse set, which included songs from the newest album, The Devil and God Are Raging Inside Me, spanned their 15-year catalog, and included “Sic Transit Gloria… Glory Fades”, “You Won’t Know”, “At the Bottom”, “Mix Tape”, and ended with their biggest hit, “Jesus Christ”. The audience, mostly made up of adult versions of the kids who followed the band religiously in the 2000s, soaked it all up and danced along. 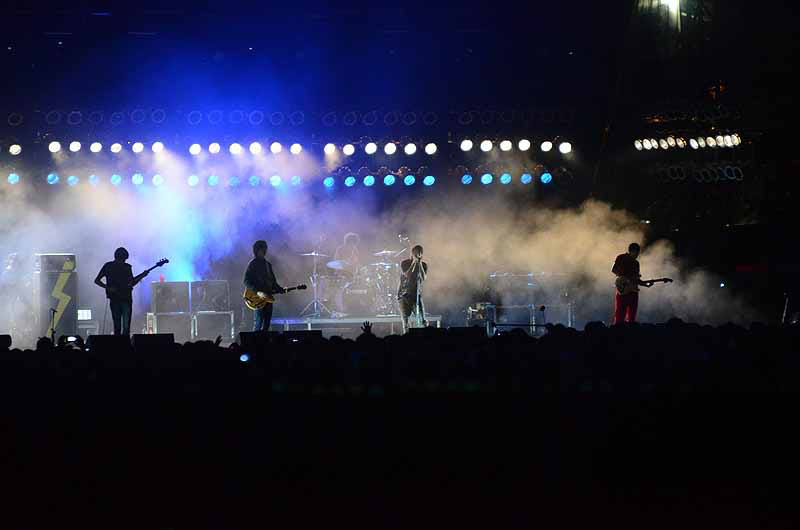 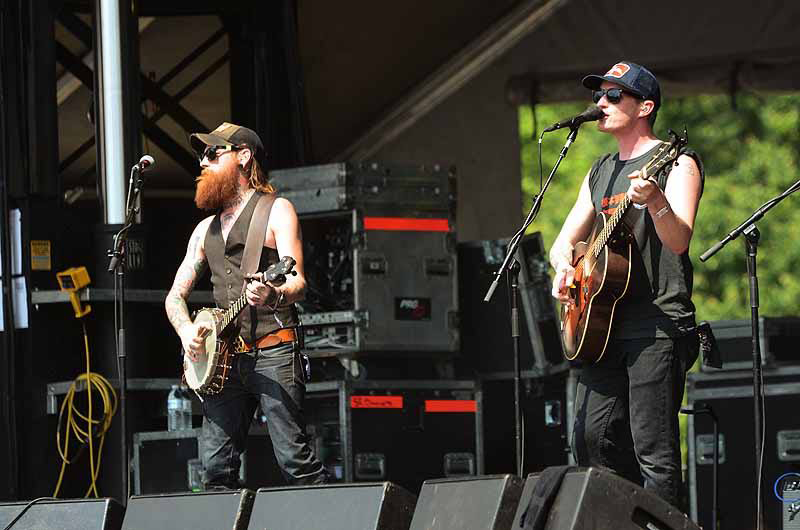 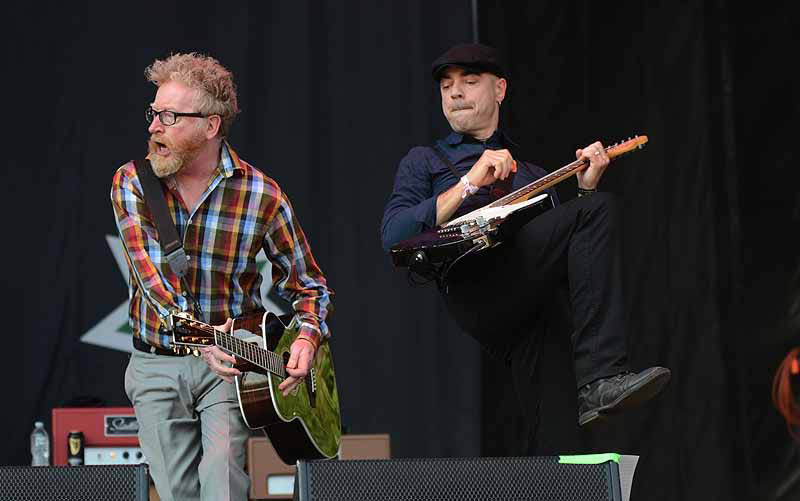 The L.A.-based, seven-piece Irish punk band Flogging Molly set a fast pace, getting about half of the large audience to dance in the blaring sun. Singer-guitarist Dave King used outstretched arms to sway the audience, all the while singing and talking between songs. After urging, “Let’s see those hands in the air,” 90% of the crowd held their hands up, swinging them to the music. King pronounced, “This is a good way to finish the tour,” and announced that Ireland was the first country to legalize gay marriage. 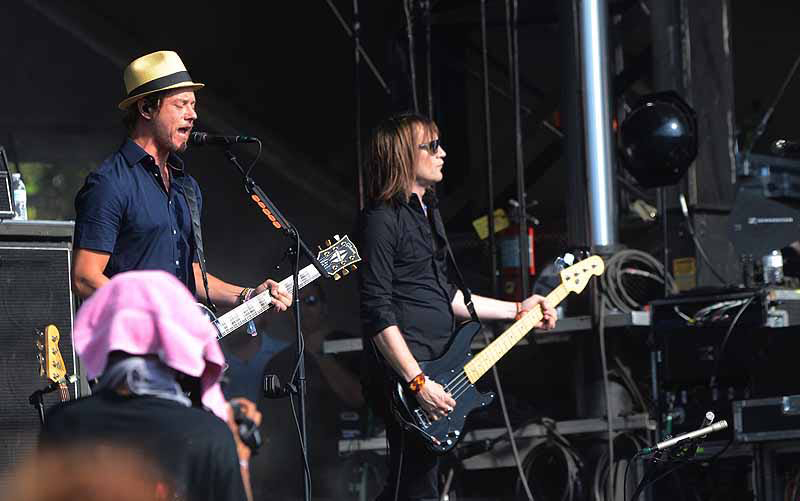 New York band Interpol was touring to promote its newest album, El Pintor (QRO review). Playing as a five-piece with keyboardist Brandon Curtis and touring bassist Brad Truax, core members Paul Banks, Daniel Kessler and Sam Fogarino opened with new song “Anywhere”, during which singer Banks wore a fedora, then tossed it aside afterwards. Under purple and white lights, the always-fashionable group wore black excepting the drummer, who wore a blue shirt. Other songs played included “Everything Is Wrong”, “Evil”, and “Slow Hands” as the closer. 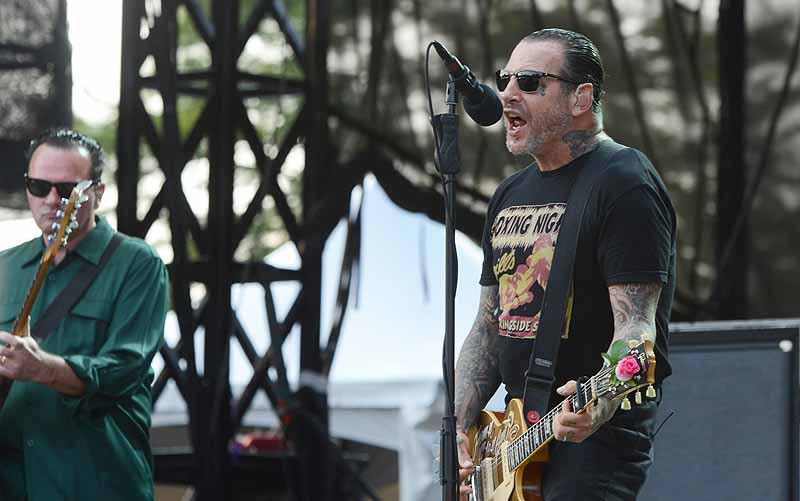 Social Distortion kicked things into high gear with its relaxed but rocking, vital punk with scruffy vocals on the main stage. Ness’ voice in top shape, and he had a rose at the end of the guitar as he played clean, short solos. The band was celebrating the 25th anniversary of their self-titled record, whose cover was the stage backdrop. Ness stated, “Looking back, it’s interesting to think what we were doing back then and what you were doing too.” Highlights of the set included “Ball and Chain”, “It Coulda Been Me”, and a terrific cover of Johnny Cash’s version of “Ring of Fire”. 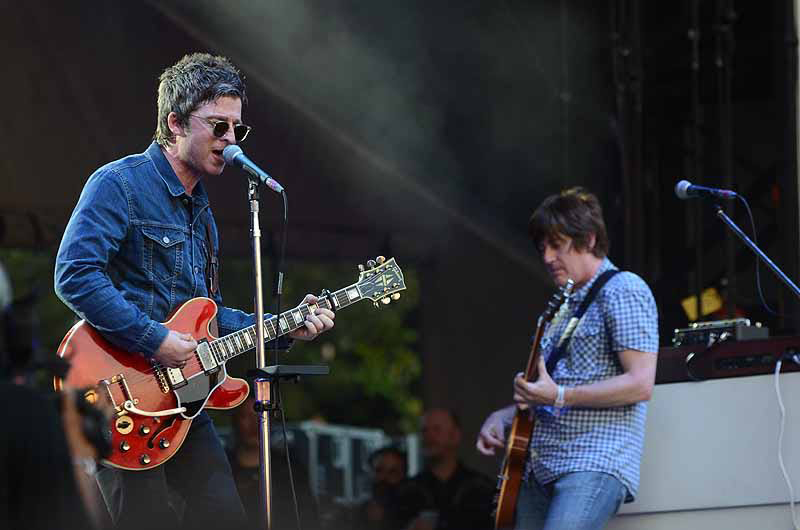 Noel Gallagher brought out his new five-piece band in front of a backdrop with white outlined letters, “NGHFB”, on a black background, under blue stage lights. The music was immediately hard-hitting with powerful indie-style pop, more aggressive than Oasis, on “Do the Damage”. Now and then, Gallagher would play a slower song on his acoustic and give the band a break. About midway through the set, a horn section was added, which gave the band a fuller sound. Only one in three songs were Oasis songs, and this version of “Champagne Supernova” was quite different than the recording. 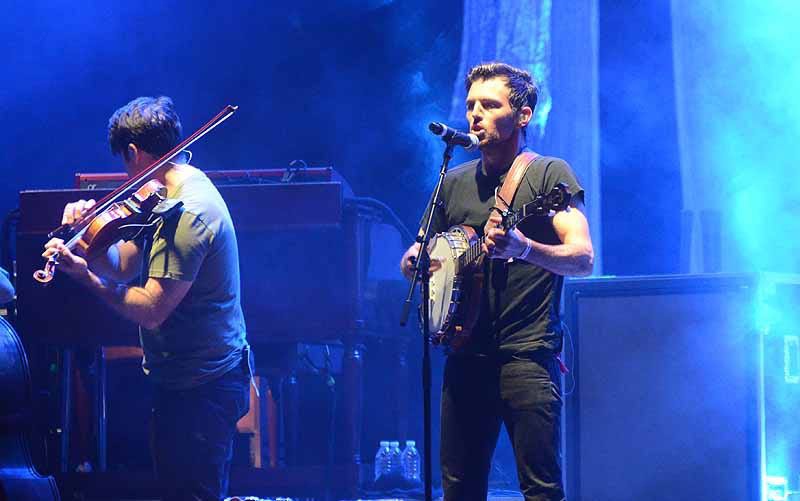 Coming out backlit in front of pale fabric pieces as a stage backdrop, The Avett Brothers and their folk-country band were only silhouettes until song verses kicked in on “Satan Pulls the Strings”. Blue lights in front contrasted with orange lights on the fabric, then would switch to white light in front, blue in back, and yellow flower shapes would roam the floor of the stage, making a wonderful light show. Each brother would get a song singing solo, as well as each instrument. During the bass solo, the banjo player instigated audience clapping. Later on, the banjo player drummed on his instrument during a drum solo, then got on his knees in front of the stage near the audience. At one point, a female in the crowd held up a “Can I Be An Avett Sister?” sign. Soon after, a female appeared on stage and sang with the band, then had a solo with piano and cello backing her on another song. Quite a few songs in the Avett Brothers’ set created sing-alongs and holding up of cell phones in the audience. 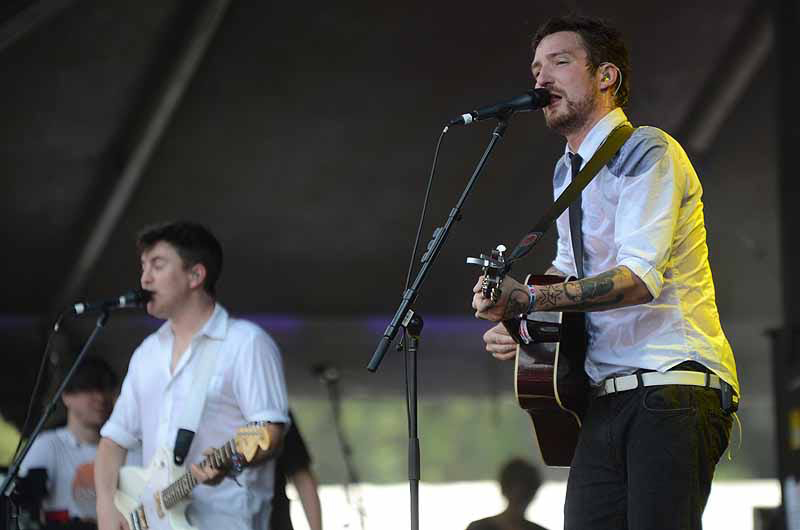 The five-piece folkie band from South England was full of energy. Frank Turner alternated gruff and smooth tenor vocals while mostly playing acoustic guitar, and sung with others for three-part harmonies, and would spin around at times. The upbeat songs got people dancing. “Peggy Sang the Blues” was very touching with great lyrics like, “It doesn’t matter where you come from, it matters where you go”. Other introspective songs were “Wessex Boy” and “Photosynthesis”, a rebellious song against settling down. Yelling choruses were commonplace, and the audience yelled along. Joking was a band feature as well, with Turner commenting about the audience dancing, “Ballroom and The Charleston are fine”, and about meeting koala bears, “Koalas have evolved to where the only food they eat, eucalyptus leaves, gets them high. This is an excellent evolutionary decision”. During “Four Simple Words”, Turner shook hands with the audience and walked around the security barrier, singing and dancing with them. 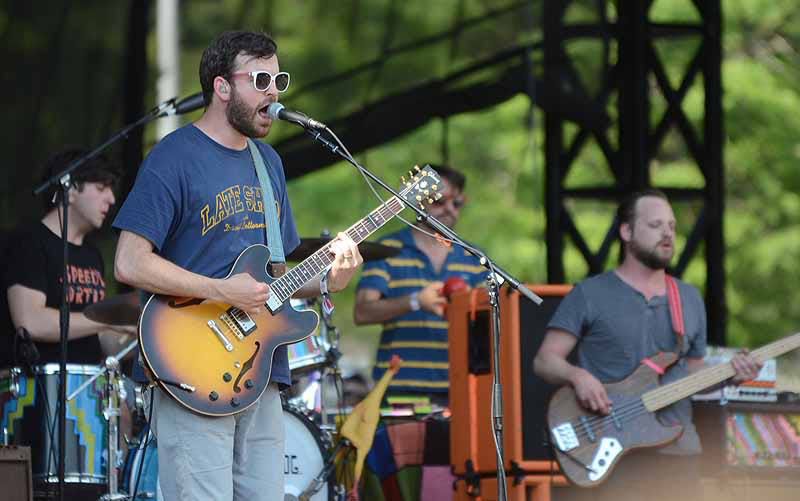 The Philadelphia-based Dr. Dog brought grooving mellow sounds, rhythm and keyboard driven music with repeatable choruses, harmonizing guitars and two singers. Their live show accentuated the instruments, giving their relaxing music more punch and drive than on recordings. The keyboardist would play heavy organ and other times, he’d play wild chords on piano. The singers would echo vocals, the drummer would play lots of splashes and crashes, and the guitarist would play intentionally sloppy solos. Their set fit the breezy, sunny afternoon well. 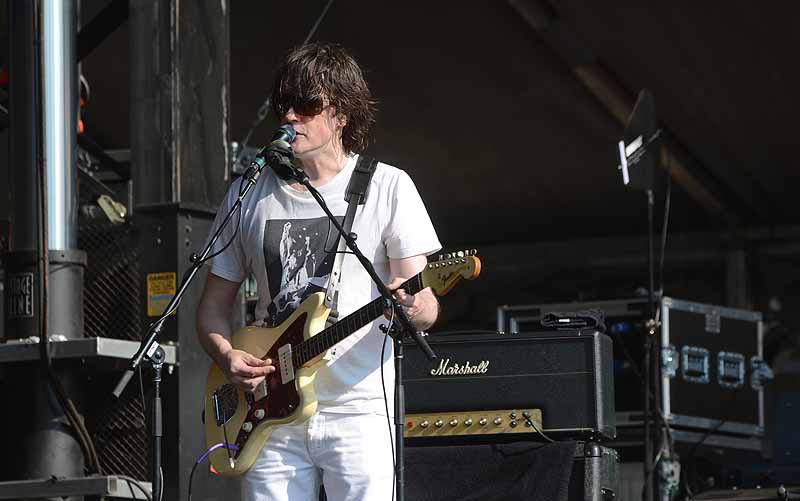 Jason Pierce, a.k.a. J. Spaceman, lead singer-guitarist-harmonica player of Spiritualized, and his backup singers dressed in white, stood on the right of the stage, facing the other guitarist, dressed in black, while the keyboardist, bassist and drummer lined the back of the stage, also dressed in black. Despite the lack of lights, the layered space rock held its own in a full daylight set. Pierce started all the songs on guitar, usually on wah-wah, rhythm or slide. At one point, he was having trouble with guitars, switched several times and made the set run late. The songs were slow, ponderous, dynamic affairs and heavy on loud electric guitar, and the audience either tuned in or dropped out, according to their taste. Many songs had a religious theme and a late ‘60s San Franciscan vibe. 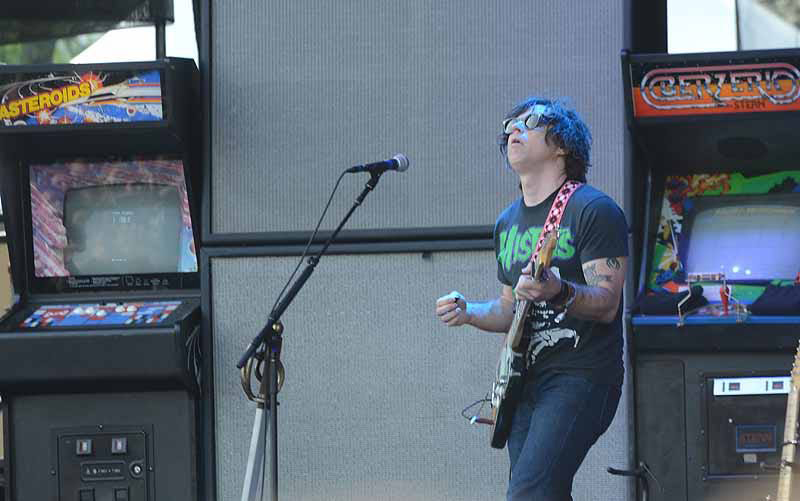 Sporting his bedhead hairdo, Ryan Adams opened strong with “Gimme Something Good”, and then mellowed out on moody alt-country ballads and occasional rock songs while mostly playing acoustic guitar. He wore a Misfits shirt, and eventually dedicated a cover of Danzig’s “Mother” to mothers after wishing them a happy mother’s day. He played in front of a U.S. flag that had a peace sign made of stars in place of the 50 states’ stars. The set ended with him playing wonderful harmonica and singing soulfully on his hit country song, “Come Pick Me Up”. 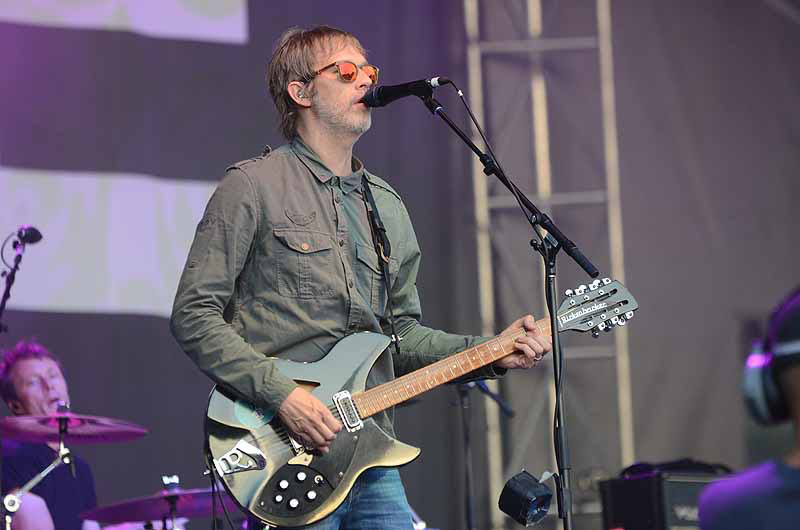 On its reunion tour, the English shoegaze band Ride showed its mettle by starting its set in full daylight. They played in front of a black backdrop with “RIDE” in large white letters, while purple, red, and white lights flashed overhead and later, when the sun went down, flashing swirl patterns were played over the backdrop. The music consisted of Rickenbacker-made wah-wah driven music that created organ and synthesizer like sounds, single note guitar drones on top of slacker pop with a bluesy vibe and slow dynamic buildups, straight ahead guitar solos, and interesting guitar fade outs at the end of songs. On other songs, there were rollicking, heavily rhythmic beats with lush layered vocals, and crescendos in faster tempo. Ride was definitely the happy surprise set of the day. 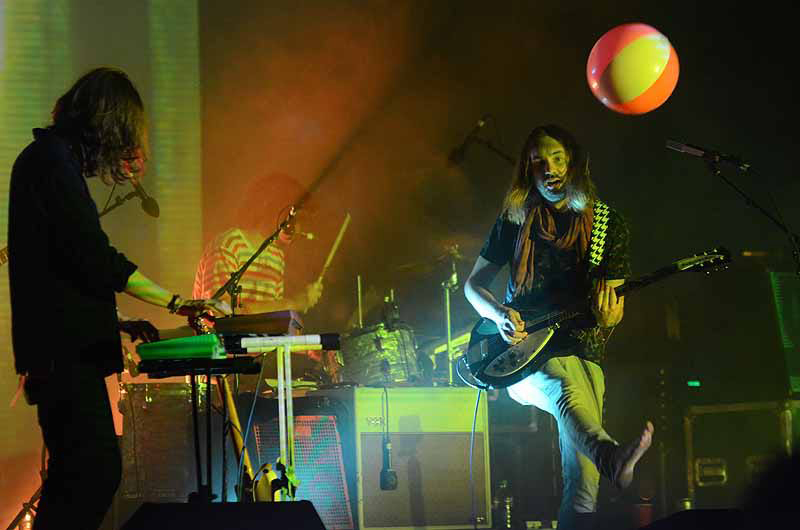 The Australians Tame Impala shared their shimmery dream pop with fragile, high pitched vocals layered over heavy bass and lightly psychedelic keyboards to a highly enthusiastic crowd. Super saturated colored lighting doused the band as they played in front of a video screen that had various geometrics swirling around them and others floated around their feet onstage. Delicate, mellow vocals ranged from whiny to howling to shortly enunciated line delivery as the swirling tunes were driven by oscillating and looping wah-wah created on Rickenbacker guitars. Punchy, bouncy, and booming bass beats created rhythmic melodies over alternating heavy and splashy drums, and on “White Elephant”, a few measures of disco were even thrown in as a mini bass solo. The music ranged from epic and fulfilling psychedelia to fun, danceable tunes.