Day 1 was long and tough, but Day 2 wasn’t as bad.  We got a later start and watched a bunch of NCAA basketball before hitting the circuit.   We got to see a secret performance by Slash @ a Red Bull Party and then hit up the Blender Bar for the New Line showcase for most of the night.  More than enough to keep us busy.

We got into the “secret” Red Bull Party and saw Slash play with a cover band.  They rocked out on “Feel Like Makin’ Love” and some Southern rock classics.  Epic. 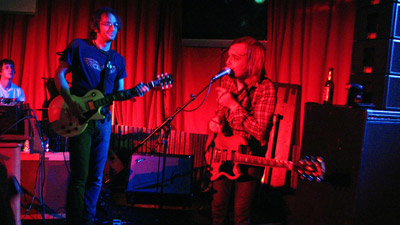 One of the earlier acts of the New Line/Scratchie showcase @ Blender Bar.  Totally ripped through a half-dozen songs, eventually bringing out guitar pimp Danny Muggs on stage.  Some serious fun was had on stage

An interesting mix between all of the rock bands.  Grooved their way through some new stuff off their upcoming album. 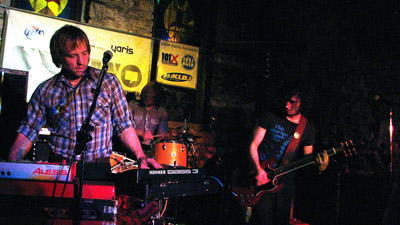 A solid in-betweener.  Lead singer Scott Masson wore a wig onstage, which he pulled off about halfway through.  They played a bunch of solid tunes from Q&A, including “Dominoes”.

Definitely kept the momentum going.  Some songs off their recent EP made them stand out.  Members of Office eventually joined them onstage.

Unfortunately, it took them about 45 minutes to set up, which left them really short on time.  They played about four songs, which was a mix of old and new.  Most of the time, however, a really crappy mosh pit broke out near the front of the stage.