When The Creators Project had a big sign saying “Welcome To Year One” at their inaugural event in 2010 (QRO photo), it seemed rather the height of hubris, claiming as ‘fact’ that the new event would be a storied and long-lived one.  Well, it’s made it to Year Two, on October 15th & 16th in the DUMBO area of Brooklyn.  Where is The Creators Project going?  What is ‘The Creators Project’, anyway?  Still somewhat uncertain, but that might be the nature of the Project – and at least it looks like its here to stay.

Any Year Two inevitably raises comparisons to Year One, and The Creators Project’s event is no exception:

Year One had free drinks; Year Two, not so much

It probably seems shallow and cheap (not to mention alcoholic) to bring this up first, but it is a clear and obvious difference that anyone not on the wagon would notice almost immediately.  The Year One event was littered with free bars, while the only ones at Year Two cost five dollars for a Heineken.

If you’re coming to Creators Project just for the free drinks, then it is probably better off not having you there, but there’s still no way for it not to look like a downgrade, especially as everyone who’d been at Creators 2010 was expecting free drinks (Heineken also is the free beer of choice at events like this, seemingly throwing its sponsorship behind everything indie, meaning that it costing dollars at Creators 2011 was even more noticeable).

Admittedly, this is actually the most obvious change – location.  Creators Project 2010 was held in one place, a converted milk distribution warehouse in west Manhattan, at 15th Street and the Highline; Creators Project 2011 was held in a series of spaces in DUMBO, the area of Brooklyn just underneath the Brooklyn Bridge (a trendier location, if harder to get to by subway).

One would think that one place would be easier to get around in than a series of places, but Milk Studios was overcrowded in 2010, with hard-to-find staircases and elevators that seemed to only be for VIPs going to the VIP-only penthouse (any VIP-only area was far less noticeable in DUMBO, a definite plus for all us hoi-polloi), while it was fairly easy to get from one place to another in DUMBO in 2011.

While everything in 2010 was indoor at Milk Studios (though the stage in the former loading dock was semi-outdoors, including passersby watching from the Highline), most stuff, including nearly all the music, was outdoor in 2011.  This allowed for bigger crowds and/or bigger bands: 2010 had people squeezing tight and squirming to get in to see artists like M.I.A., Die Antwoord, and Sleigh Bells, including near-fights, a hard-to-see stage, and a photo pit that was destroyed during Die Antwoord.  In contrast, 2011 had fairly open stage floors that could accommodate many (if slightly too skinny – the biggest stage was under an arch off the Brooklyn Bridge, which was fittingly epic and architectural, but longer than it is wide, making for a lengthy way to wind through the crowd, even if you were trying to get out of there).

Of course, the outdoor event was held in middle of October, with blustery gusts of wind coming off the East River.  But it’s hard to book outdoor spaces in New York in late June, and Creators Project 2011 conflicted with a lot less (even serving as a nice appetizer before New York’s CMJ Music Marathon, which started two days later). 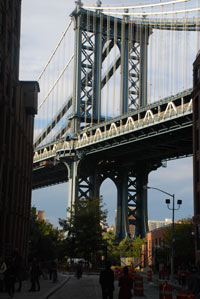 The seeming mission of The Creators Project is to take artists in one field and get them involved in other field(s), to tie together different strands of art, especially music – have musicians doing art, have interactive art alongside concerts, etc.  Creators Project 2011 had a wider variety of not-strictly musical artistic endeavors, such as a physical manifestation of Spirtualized‘s seminal Ladies and Gentlemen, We Are Floating In Space, an immersive collection and remix of footage around David Bowie‘s ultra-seminal “Life On Mars” (QRO Music of the Spheres), films, games, and the debut of Karen O‘s (of The Yeah Yeah Yeahs – QRO album review) musical Stop the Virgins – all upping The Creators Project from merely a music-first enterprise. 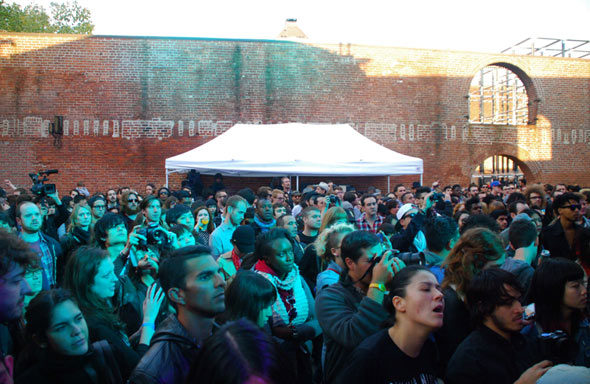 But upping their game in that way did make it harder for Creators Project 2011 to tie everything together – you’d have to skip seeing a band to see a film or the like; Stop the Virgins was even a separate, ticketed event.  The dispersed locations didn’t help, either – it was very easy to go to The Creators Project for just the music, and only see the music (save for ‘Origin’, a giant box of lit rods that Creators Project first introduced at Coachella, and was right near Tobacco Warehouse, the other main music stage).  The only place that really made a stab at combining things was 55 Washington St., which had acclaimed DJs such as Nosaj Thing & The Juan MacLean (QRO interview) playing around electronic art & game installations such as ‘Super Pong’ (sort of a mix of pong and foosball, played on a screen facing up towards the ceiling), ‘Diskinect’ (a mannequin that was supposed to electronically mimic the moves a person, though seemed to do so only barely – the left arm in particular seemed not to work – and in a very delayed and reduced fashion), and others.

The music was also limited to only Saturday, so there was far less interest in & attendance of the ‘other stuff’ that happened on Sunday.

Only DJs & games could occupy the same space – big artists need outdoor stages all of their own, while movies & installations need their own indoor viewing areas.  Basically, the bigger things get, the harder it is to put them together – mo’ art, mo’ problems.

However, The Creators Project is still built around music, Year One or Year Two.  That’s what most people came down to DUMBO for (even those looking for free drinks).  Year One was largely focused on highly-hyped, even over-hyped dance-hop acts, along with a few big exceptions (the return of The Rapture; the return of Interpol…).  Year Two was much more about electronica, though still with a few big exceptions ($chwag hip-hop of A$AP Rocky, the headliner…). 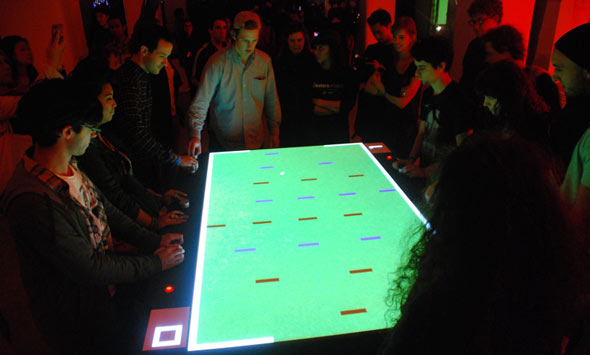 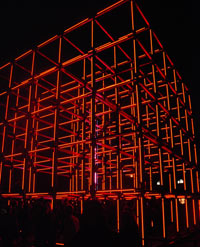 For many, Chairlift‘s set early in the day was a standout, thanks to their energy, but the most-talked about might have been John Maus – though not necessarily in a good way, as it seemed the artist weirded his crowd out.  Four Tet had the sound, but an utterly uninteresting visual performance (people were crammed under an archway to see a guy press keys on his laptop?), while A$AP Rocky were a clear thematic outlier (does everything indie have to have at least one hip-hop act so white kids can cheer getting money & booty without losing their indie-cred?  At least it wasn’t Odd Future…).  Surprise hit was France’s Yuksek, who overcame technical difficulties forcing a late start, and being way less known than other acts there, to impress with Francophone electro-dance, while Atlas Sound – the side-project of Bradford Cox (QRO solo live review) of Deerhunter (QRO live review) – surprised by coming with a guitar, not a laptop (okay, could have still used a band – QRO live review with band – but also brought Flock of Seagulls haircut…). 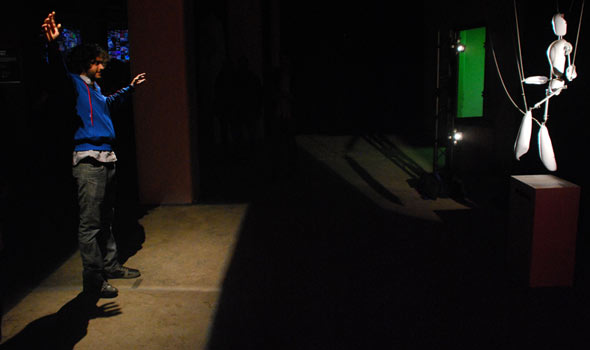 The headliner was Anglo-stars Florence & The Machine, who are not some industrial outfit, but the bossanova diva Florence Welch and such instruments as guitar, drums, and harp. Welch & her Machine have become big stars since the 2009 release of Lungs, appearing on Saturday Night Live and even The Grammys (QRO Indie on Late Night TV).  But this was the group debuting new songs from their highly anticipated follow-up to Lungs, Ceremonials.  Even though Ceremonials comes out next month, this was the first time they were playing the songs live in front of an audience – an audience that was huge even forty-five minutes before the scheduled start time.  Thankfully, Florence & The Machine didn’t disappoint, in numbers both old (“Cosmic Love”, “Dog Days Are Over”) and new (“What the Water Gave Me”, “No Light, No Light”), and well earned their status as ‘the main reason you came to The Creators Project 2011.’

Maybe in 2010 the overall line-up was better, or at least had more hype, and maybe you got closer to the stage last year (unless you were a 2011 photographer with a hard-to-get photo pass for the Archway Stage, but who cares about the opinion of people paid to be there?); but you weren’t crammed into a dark room with an unfriendly, rowdy crowd – and your RSVP was much more likely to be accepted in 2011 in the first place.  Plus, where are Die Antwoord now?  And Florence Welch can kick M.I.A.’s ass… 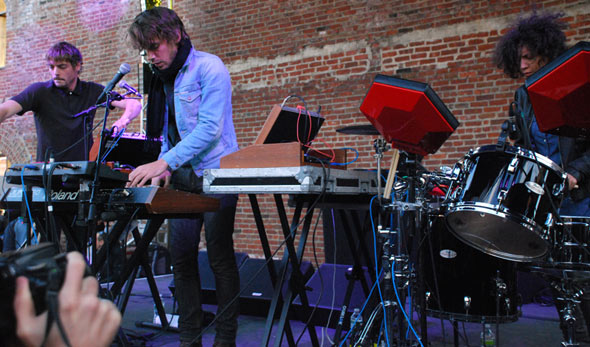 Despite it being ‘Year Two’, it’s still hard to figure out exactly what The Creators Project is, let alone where it is going.  But maybe that’s the point, or at least a major side effect – combining art forms & artists isn’t going to make for a cohesive, easy-to-describe & categorize Project.  Perhaps it should be renamed ‘The Creators Projects’.  And at least there will be a Year Three to further explain & confuse (having that Intel & VICE Magazine money behind it certainly helps…).

Bush : The Sea of Memories