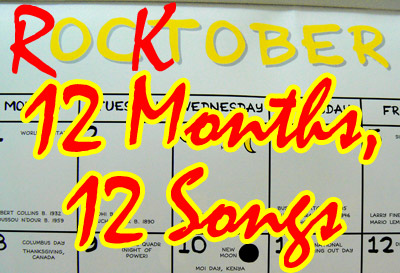 The first month’s frigid weather, and what it means, is explored by Scottish singer/songwriter Paolo Nutini on this live b-side to his “Jenny Don’t Be Hasty” single.

“Could it be January? / 'Cause it feels so cold without you here”

There are only three things remarkable about February: Groundhog Day (the movie, not the actual day), that extra day it usually doesn’t have, and Valentine’s Day.  And on their latest, A Blessing and a Curse, Georgia’s cow-punk Drive-By Truckers speak up for all the people for whom this Hallmark holiday is the day they’d most like to forget.

“St. Ides of March”, The White Stripes, The Hardest Button to Button Single (2003)

Somewhere along the way the ‘St.’ got dropped from St. Valentine’s Day, and The White Stripes took it and put it a month and a day later, on the date when Julius Caesar got the knife from Cassius, Brutus, et al.  However, the lyrics to this blues b-side of “The Hardest Button to Button” single don’t explain why.

With creation comes destruction, and no month’s as destructive as this one in spring.  Those thunderstorms can create havoc, but also opportunity, as pointed out by former Grant Lee Buffalo frontman Grant-Lee Phillips, on the final track of his second solo album, Mobilize.

“April chimes tangled in the wind / Timing's everything and all that, friend”

Once a pagan holiday of spring, May 1st was given a serious modernization when the international socialist movement made it a holiday in memory of the Chicago Haymarket riots of 1886.  It’s celebrated everywhere in the world except for the U.S., but maybe singer/songwriter Elvis Perkins can bring it back to its home, with this upbeat take on chaos and aliens from his debut, Ash Wednesday.

“On May Day, May Day listen for the sound / Of the Geiger Counters counting down”

As a child, there’s nothing better than when spring turns to summer, and in the first month of your vacation, the next school year looks a million miles away.  But when you get older, June’s just another month, only with the sad, sour aftertaste of all the hope it once held, something Camper Van Beethoven explored in this track off their classic, Key Lime Pie.

“Are you weary of the lengthening days?
Do you secretly wish for November's rain?
And the harvest moon top reign in the sky (now that it's June)?
There is nothing in this world more bitter than spring”

But for kids, there’s nothing sadder than watching those days of summer fly by, and with them, all that you could have done.  Adults, too, can waste their days, just sitting around, which London’s Apartment shine a light on in “June July”, off their debut record, The Dreamer Evasive.

“June, July, you wasted / Because you never left your home”

To Americans, the dog days of August are slow and sweaty, but to Britons, they’re the lead-up to war, whether it is the guns of August of 1914, the Nazi-Soviet Pact of 1939, or The Blitz of the following year.  And that’s what Clinic was going for, on their record named for a church in England not destroyed by German bombs, Winchester Cathedral.

September’s been livened up in the U.S. with Labor Day and the start of the football season, out of its sad past of farmers reaping their harvest and getting set for the long, cold winter.  Louisville’s My Morning Jacket went back to those Americana days of yore in their debut, The Tennessee Fire, with “Old Sept. Blues.”

“October
And the trees are stripped bare
Of all they wear / What do I care?

Beating out “October” as the easiest pick on this list, Axl Rose took American Novembers out of the hands of politicians and Pilgrims with his last massive Guns and Roses hit, Use Your Illusion I’s “November Rain”.  Clocking in at just less than nine minutes, it was the longest song ever to break the Billboard Top 20, with Slash providing the Top Ten’s longest-ever guitar solo.  But it, like Axl’s career, had to end…

This last month of the year is heavy with special days, from Christmas to New Year’s Eve, Hanukkah to Kwanza, Festivus to a date which will live in infamy.  On their newest, Eisenhower, New England’s The Slip point out something else: With all of that going on, anyone’s birthday is bound to be forgotten – how can it compete with Jesus’?