For Pride Month, there was the first ever Village Voice Pride Awards.... 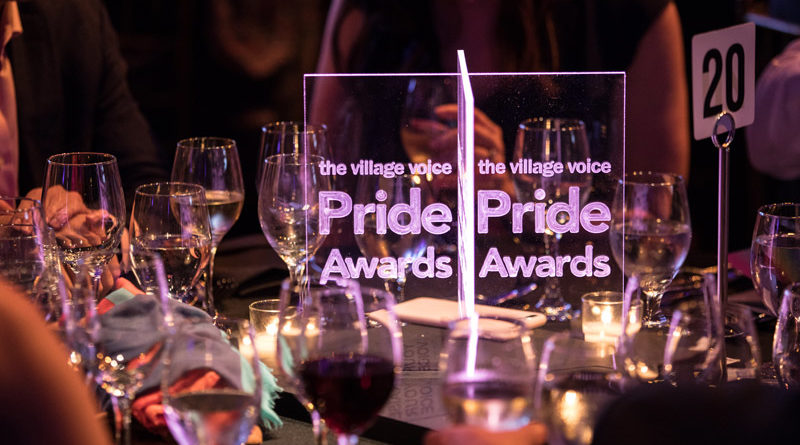 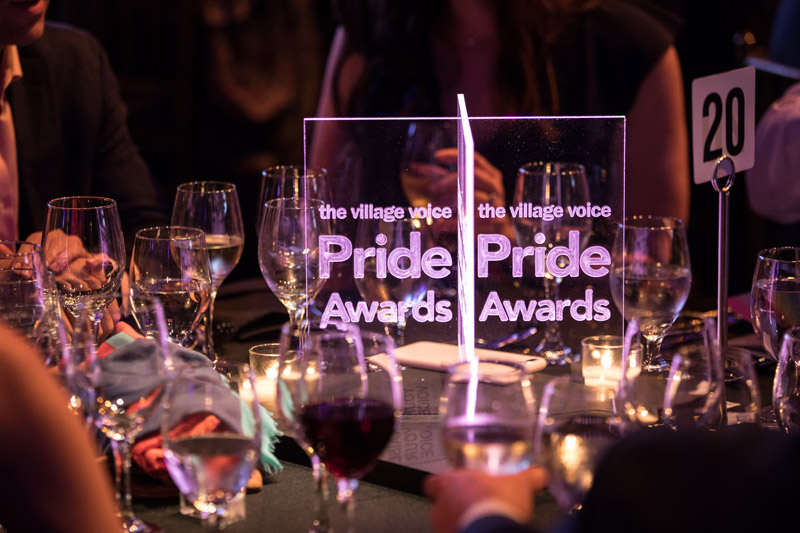 While a good part of the world probably has no idea, it has been very obvious in New York City that June is Pride Month, a celebration of LGBTQ culture & rights, and a stance against violence and discrimination. Of course, the month is June because of the famous Stonewall Riots that took place in June of 1969, leading to Pride Marches the very next June, though the month was only officially designated “Lesbian, Gay, Bisexual, and Transgender Pride Month” in 2009. There have been marches & events around the country and around the world, but in New York there was a particularly special one, the first-ever Village Voice Pride Awards at Capitale in downtown New York on Wednesday, June 21st. 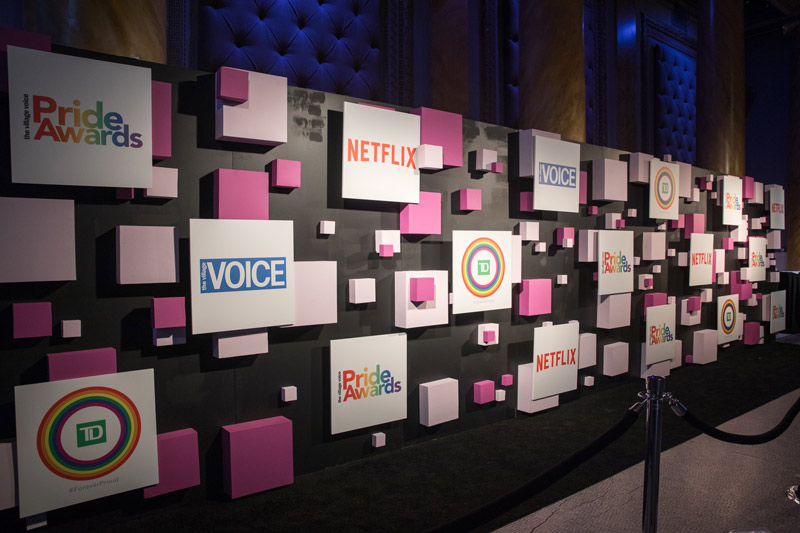 Unlike the street kids of Stonewall and Christopher Street, the ceremony in the Bowery/Nolita area was classy – with full open bar [your correspondent had to wait agonizing minutes for it to open…]. After check-in there was a milling about in the foyer, where one could hit the bar, put on one of the ACLU ribbons being handed out, get the tasty hors d’oeuvres [your correspondent ‘accidentally’ ended up standing between a bar and where the food came out…], and watch the celebrities move down the red carpet. Yes, we all want “fame proximity,” as one attendee admitted, watching first musical guest Tegan & Sara Quin, then four members of sponsor Sense8 from Netflix, plus host Alan Cumming. And then there were these people you didn’t recognize on the carpet – oh, those were the actual honorees… 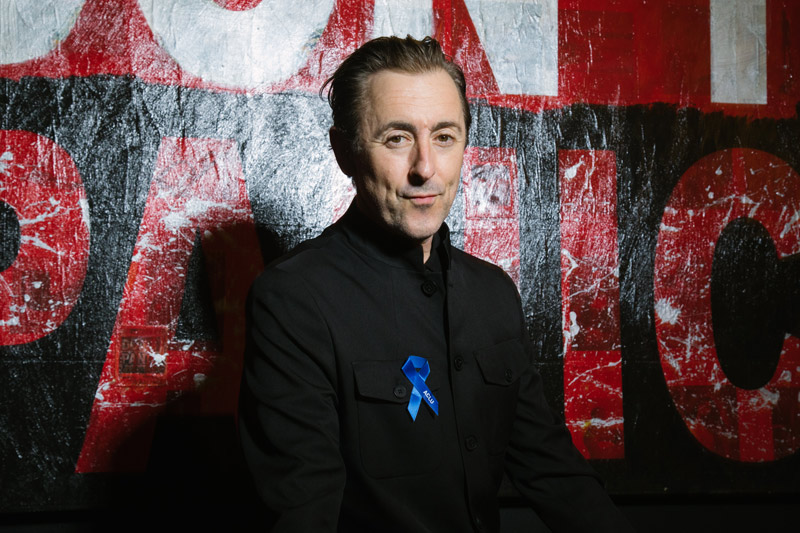 Having a host like Alan Cumming and musical guest like Tegan & Sara (QRO spotlight on) was no big surprise, as they’ve been vocal in promoting LGBTQ rights – Tegan & Sara played the ‘Pride Island’ event the following weekend. However, Sense8 was a bit surprising as a sponsor – not for supporting the Pride Awards, as the show has been hailed for its depiction of not just homosexuals & transsexuals, but its international cast and settings. Rather, it’s that the show, whose second season had premiered only in May, had been cancelled in early June. The sponsorship must have been set up before that, and the cast in attendance did not let any awkwardness or disappointment show.

[UPDATE: Sense8 has risen from cancellation to return for a two-hour special in 2018!] 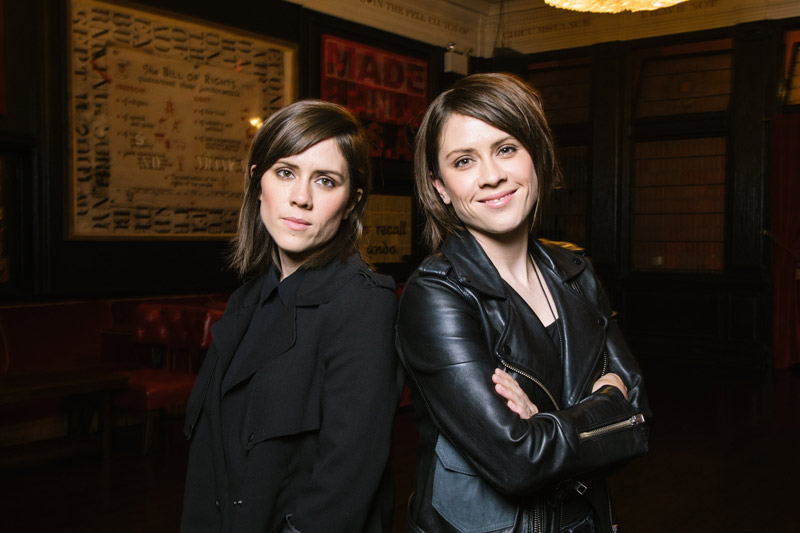 Also props to fellow sponsor TD Bank, whose logo was prominently displayed. Banks are usually thought of as staid institutions that steer clear of anything even remotely controversial, certainly when its donating money, not making it, so it was commendable to see a boring mainstream corporate institution support the Pride Awards. 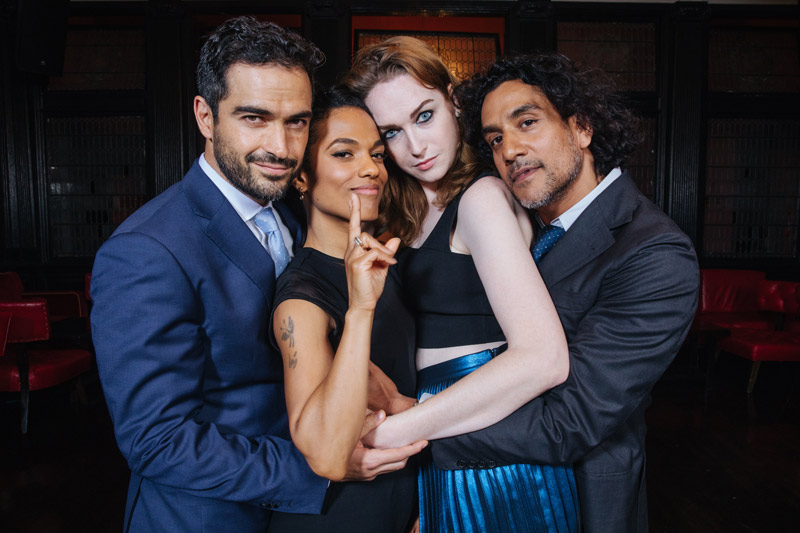 The Sense8 cast there was Jamie Clayton, Freema Agyeman, Naveen Andrews, and Alfonso Herrera. Somewhat ironically, of those only Clayton played one of the ‘cluster’ of eight sensates central to the series, though she did play transsexual lesbian hacker Nomi Marks – and both Agyeman and Herrera played Amanita Caplan and Hernando Fuentes, respectively, the gay love interests to sensates. Of course, your correspondent was most excited when Andrews walked by him, even briefly making eye contact – because he’ll always be Sayid Jarrah of Lost (QRO live review of other time your correspondent met Lost cast members)… 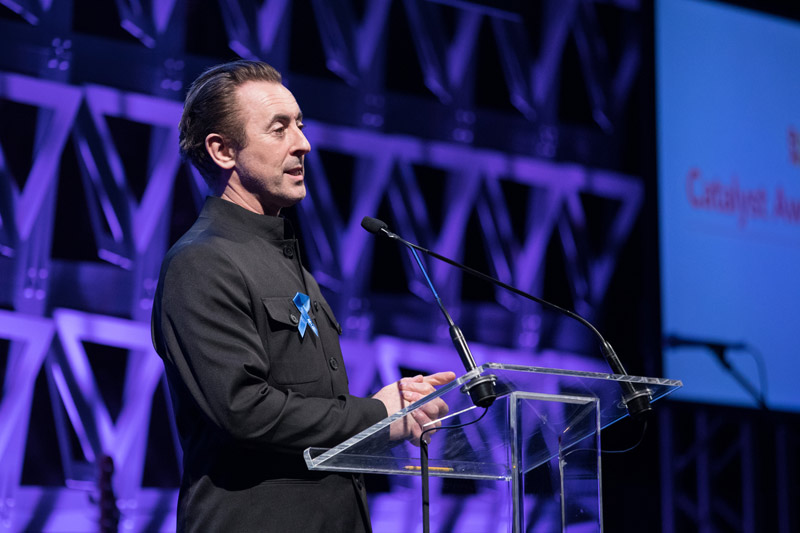 The actual event was a dinner and awards ceremony. It began with a quite moving video introduction, including clips of gay political pioneer Harvey Milk and president Barack Obama. Cumming’s opening piece noted how he had played all characters on the LGBTQ acronym spectrum – this did entail a filmography that felt a little like a self-congratulatory plug (including his upcoming CBS series Instinct – which also stars Andrews), but he has had an impressive career (he was Nightcrawler…). And yes, he was nostalgic about our former president (“Don’t you miss Obama?”) and asked that any Trump supporters there to stay in the closet for a few hours. But he also spoke up for those speaking up for LGBTQ issues, not just Village Voice but even Teen Vogue, “Who the fuck thought Teen Vogue would tell it like it is?…” 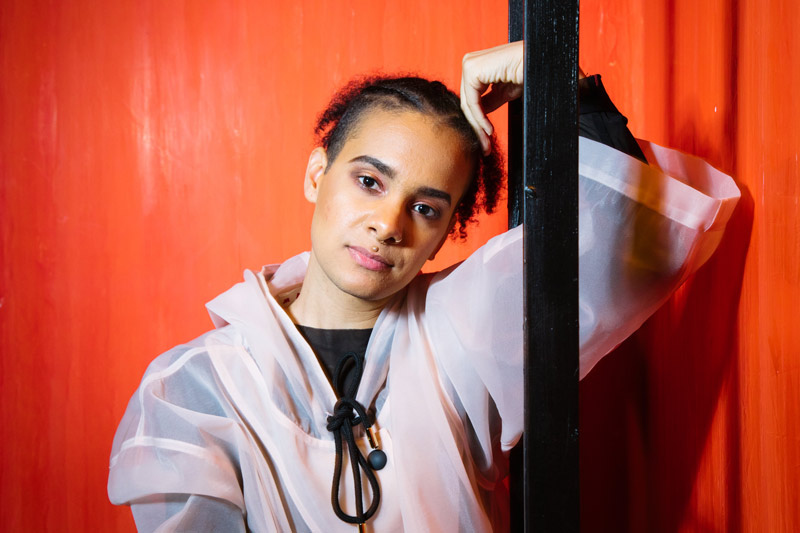 Award winners began with Tyler Ford, for the Catalyst Award, given to “a young person who best represents the future of LGBTQ advancement,” for a speaker and writer on queer and trans identity. Unfortunately the next two winners couldn’t be there: Leanne Pittsford, Vanguard Award for founding Lesbians Who Tech, couldn’t make it for “the best reason”: she was getting married. However, notable Black Lives Matter activist DeRay Mckesson wasn’t there to pick up his Influence Award for unknown, or at least unstated, reasons – it’s always a little awkward when an award winner doesn’t show up to pick up their award, particularly without a reason or even someone else to accept it on their behalf (as Pittsford had), not to mention that it was also the one Pride Award winner that stepped out of the specific LGBTQ arena. 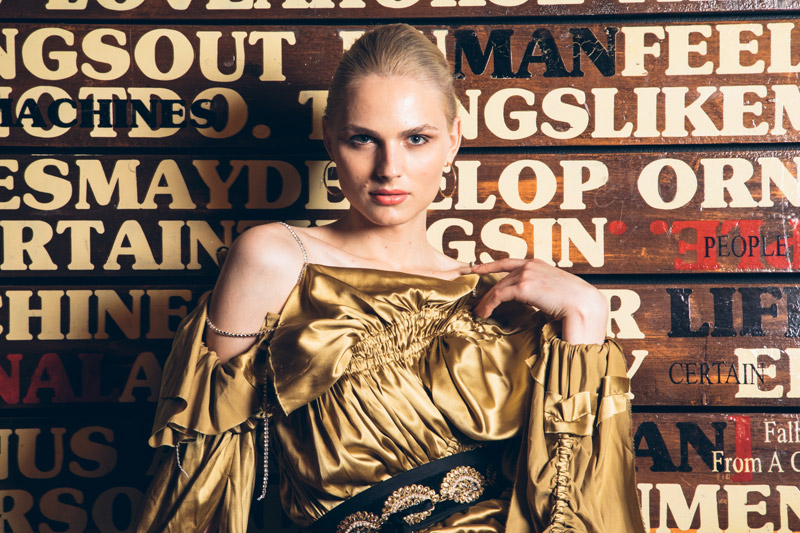 Then came two award winners that really made you, or anyone, feel like you’re not contributing enough to make the world a better place. Model Andreja Pejić gave the Ali Forney Center the Impact Award for being the largest agency dedicated to LGBTQ homeless youth in the U.S., with a video depicting its mission and highlighting the particularly large and outsized issue of LGBTQ homeless youth. Surprising and delighting the acceptor, executive director Carl Siciliano, was that the ‘award woman’ handing out the actual awards (you’ve seen them on the Oscars and the like), Angelica, had actually lived with the Ali Forney Center a decade ago. Then there was Masha Gessen, whose Vision Award was for her pioneering and dangerous journalism in her native country of Russia, on anti-gay efforts there and the general slide into a totalitarian kleptocracy. 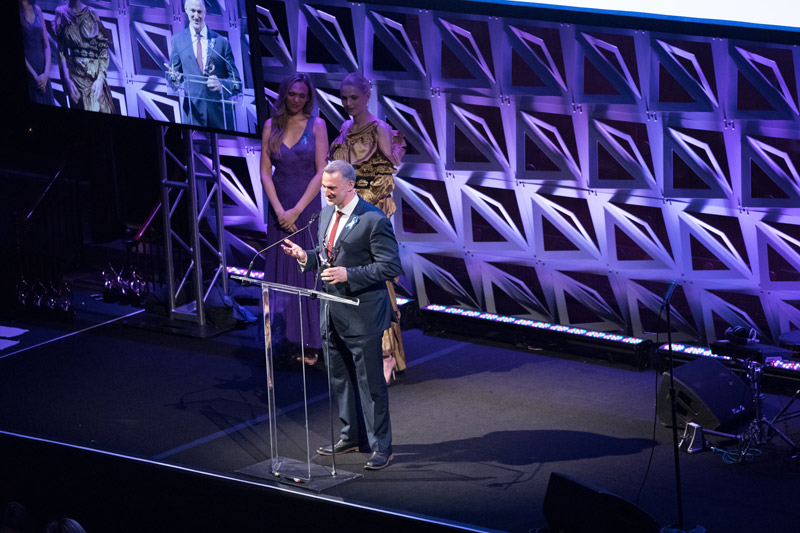 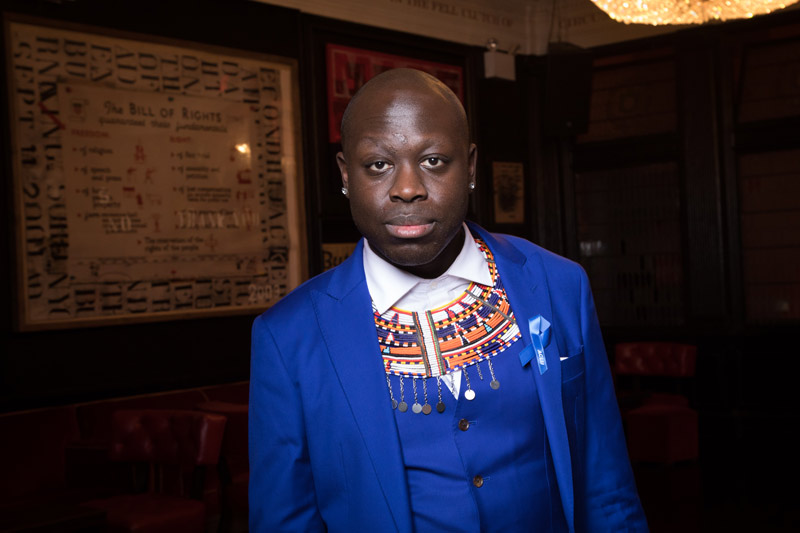 To present the Maverick Award was the present RuPaul’s Drag Race winner, in the last few days of her reign, Bob the Drag Queen (mentioned not being in drag, but still dressed up for the occasion). The award was given to designer Patricia Field, who has handled clothes on such notable and fashion-forward productions as Sex & The City and The Devil Wears Prada (the video introducing her highlighted many of those wonder outfits). Admittedly, her speech dragged on a bit, including reciting the dictionary definition of “maverick” (using a dictionary definition in a speech is pretty much never that good), talked about pride & the other deadly sins, and then rambled into something about how people actually aren’t born gay, but through “conditioning” or the like. It worked better when she said it, but could have used a “wrap it up” orchestra. 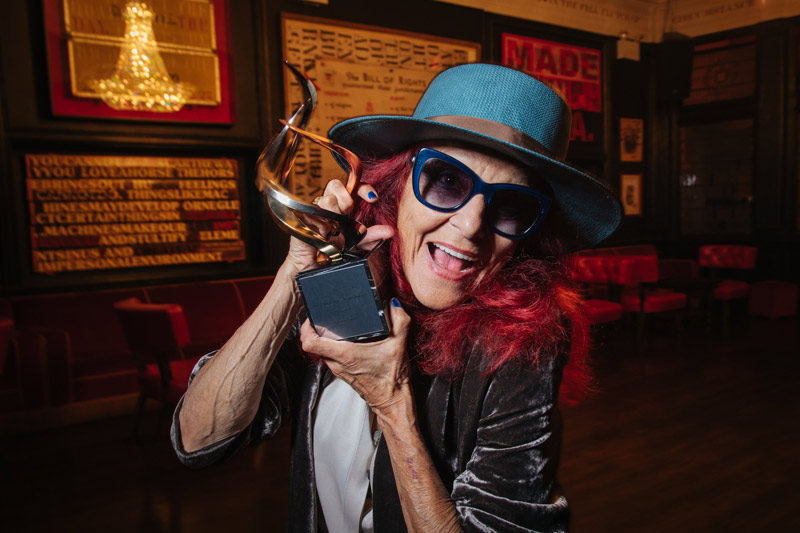 Mid-event, Tegan & Sara came on to play “Boyfriend”, a pretty much on-the-nose choice (their single about not wanting “to be your secret anymore”), and returned later to do another obvious choice, pro-love in all its forms single “Closer”. There was a film for their new Tegan & Sara Foundation, where they mentioned that they’d planned it before the current president was elected (QRO live review of Tegan & Sara just before the election). For “Closer”, Cumming introduced them as this new band, “Sara & Tegan!” Surely not the first time someone’s jokingly reversed their names, Sara still gamely thanked, “Finally,” adding that the song was, “By the band now known as Sara & Tegan…”

[your musical journalist correspondent definitely wished there had been more Tegan & Sara music, and seemed to be the only one rocking in his chair – though did see Clayton rocking coming back from the bathroom] 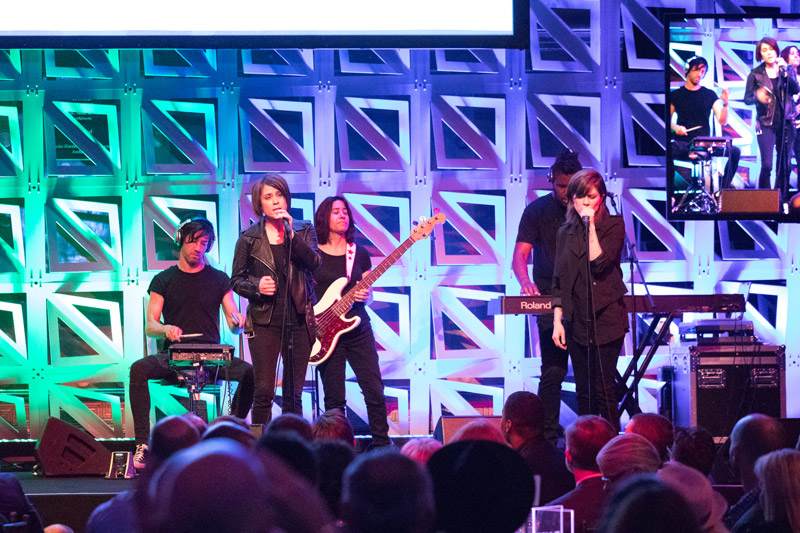 Earlier in the evening, in the foyer after the celebrities had been photographed, one attendee asked your correspondent, “Who is that woman” who was getting photographed on the red carpet. It turned out to be none other than Edie Windsor, i.e. the lead plaintiff in United States v. Windsor, which successfully overturned Section 3 of the Defense of Marriage Act and was the landmark legal victory for gay marriage (that had even come down in June, three years ago). Accepting her Heritage of Pride Award, her speech was just as strong as you would have hoped (it pays to write these out beforehand, folks…), from general celebration of civil rights to specific calls to action, like for the upcoming 2020 census to include sexuality (it was introduced by the last administration, but removed by the current one), and to support the ‘LGBT Pride Act’. 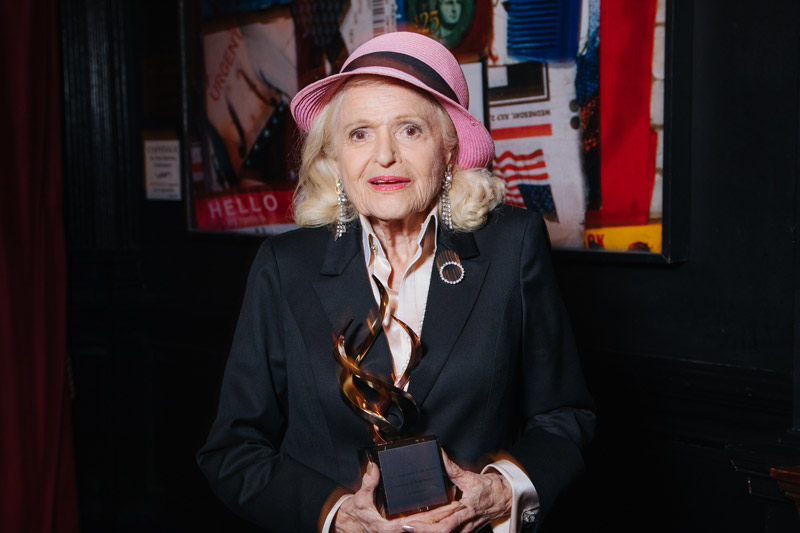 The cast members of Sense8 presented the final award, each sharing duties reading off a teleprompter, but doing it well. The Courage Award went to Gavin Grimm, another person one would feel embarrassed about overlooking in favor of the celebrities earlier, as Grimm is the seventeen-year-old transgender high school senior whose desire to use the boys’ restroom was blocked, leading to another landmark LGBTQ civil rights case that made it to the Supreme Court, though this one was recently sent back to the Court of Appeals after the current administration rescinded the Title IX guidance clarifying protections for transgender students. Having just graduated, Grimm did point out that the case was just or even really about bathrooms, but about equal rights – how would you feel if you were out some place and didn’t have access to a bathroom? 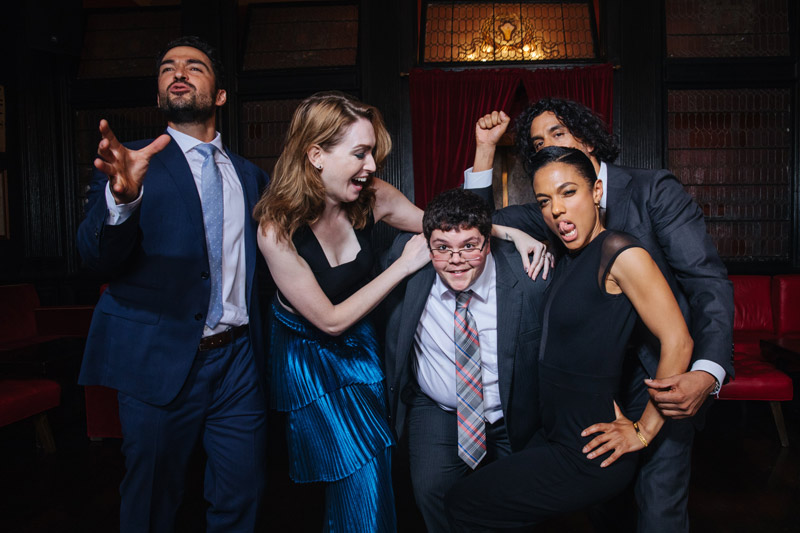 Special note must be made of the signs on the bathrooms at Capitale, made for the event. On each door, it showed the male bathroom symbol (outline of person in pants), female bathroom symbol (outline of person in dress), and between the two the symbol for those between the two genders (outline with dress on one side, pant leg on the other), and the words, “Whatever … Just Wash Your Hands” 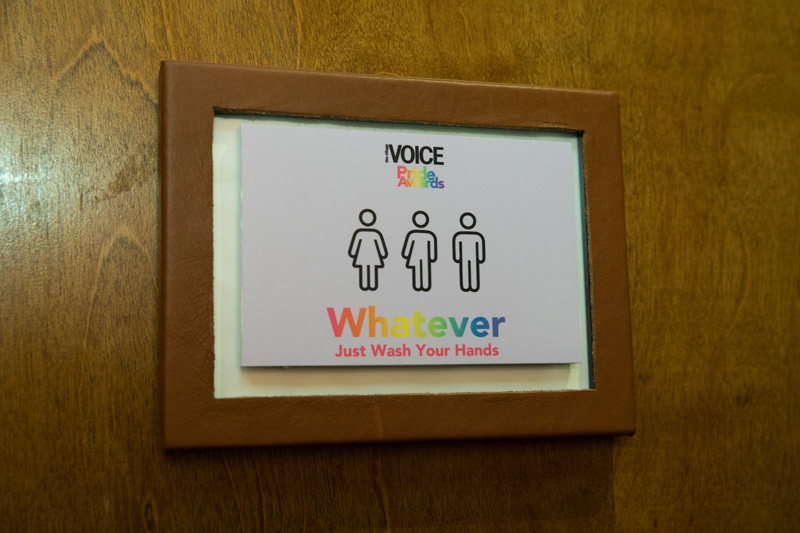 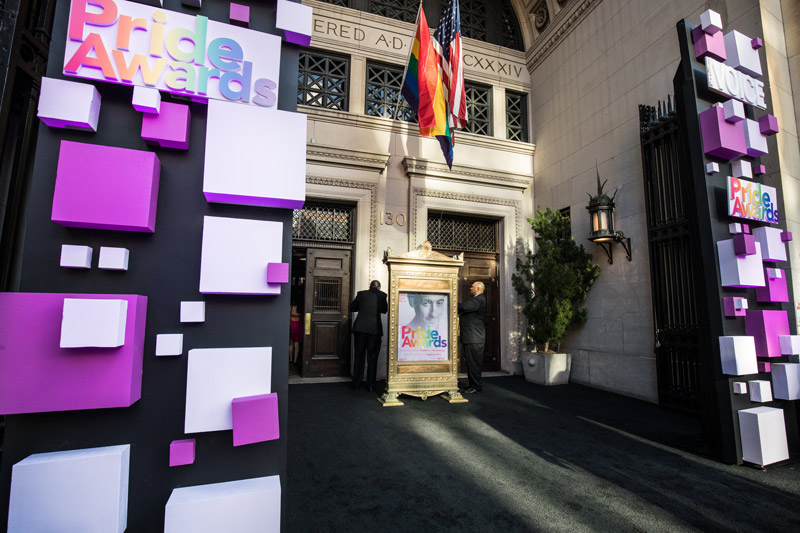 This was the first ever Village Voice Pride Awards, and did admittedly struggle to stand out amid the celebrations, awards, marches, events, and more in Pride Month, being perhaps more formal and staid than other Pride Month events [your correspondent wore a tie!…]. But the classy formality did give it the feeling of being established, which is what Pride and LGBTQ rights thankfully are at this point (though, as Cumming noted, “We have so far to fall…”), at least in America, at least in New York (last year, Stonewall Inn was designated a U.S. National Monument…). And the awards honored how far the cause has come, those who have gotten it there & are carrying it forward, while also highlighting how far it still needs to go. 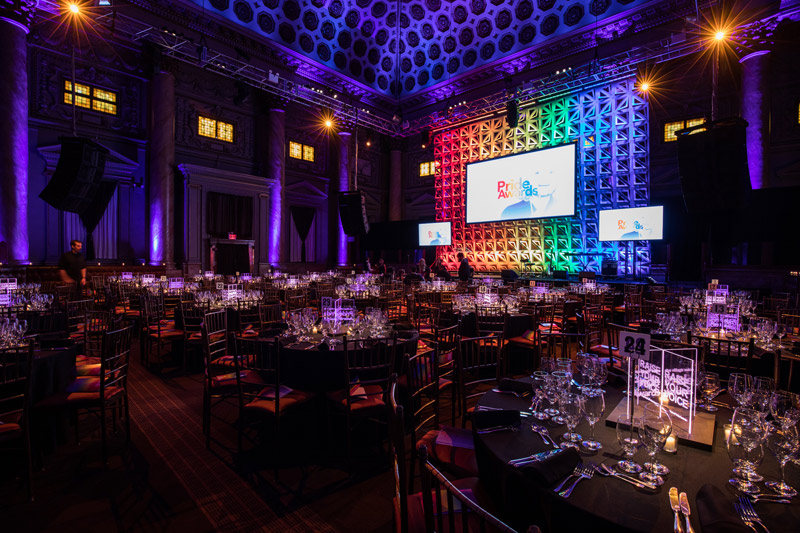