Like with her records, Leslie Feist seems to tour sparingly, but when she does, she goes full out.... 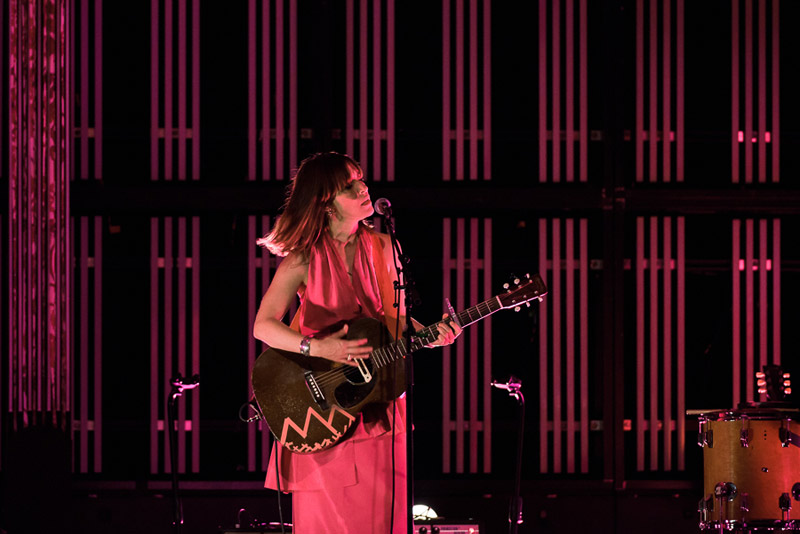 Like with her records, Leslie Feist seems to tour sparingly, but when she does, she goes full out. Earlier this year she released Pleasure (QRO review), only her fourth Feist album, and a good ten years since her breakthrough sophomore release The Reminder (QRO review), with its Apple iPod commercial hit “One Two Three Four”. Her Pleasure tour brought her to three nights at New York’s Town Hall, closing on Monday, June 12th.

Click here for photos of Feist at 2013 Arts & Crafts Field Trip Festival in Toronto, ON, Canada in the QRO Concert Photo Gallery

Click here for photos of Feist at 2013 Governors Ball in New York, NY in the QRO Concert Photo Gallery

Click here for QRO’s review of Feist at Brooklyn Academy of Music in Brooklyn, NY on November 2nd, 2011

First up was all of Pleasure, top-to-bottom. ‘Performing the new album in full’ can be a tricky thing, as while the audience presumably knows it, they don’t know it as well as the older stuff. It can also come off a bit presumptuous and self-interested, “I only want to play my new stuff.” And the songs aren’t road-tested live. But Feist & co. really enhanced Pleasure at Town Hall.

To be fair, Pleasure is something of a challenging record, one that needs multiple spins to reward. But in Town Hall (QRO venue review), the album’s intimacy was strongly raised, like an up close & personal coffeehouse (albeit with great sound & backdrop). The place was designed as a ‘people’s theater,’ no box seats for VIPs and good sight lines throughout [your correspondent’s press ticket was all the way on one side of the orchestra, and he didn’t mind it a bit]. The crowd remained seated for all of Pleasure [the fan in front of your correspondent did ask, pre-show, if he & his row would be offended if “the music moves me” and she stood up…], and hushed, allowing the quiet record to breathe and touch. When Feist sang, “You know I’d leave any party for you / ‘Cause no party’s so sweet as a party of two,” from Pleasure standout “Any Party”, it felt like she was singing it directly to you. Also supporting was the backdrop, including a lit-up giant foldable fan behind the band, and a giant mobile hanging above the drummer.

Another plus was that the setting allowed Feist to joke with the audience during Pleasure, from remarking, “I feel like I was just here – oh, I was. But I have a feeling about you guys…” to talking about holding onto a dream one shouldn’t before “Lost Dreams” (a fan shouted out, “Marriage!”). She described “The Wind” as being about this “wild land, Canada,” before showing the American audience their national wolf call (“You guys pray, and we howl at the moon…”). And single “Century” was dedicated to someone who had just tried out for the band, but failed (“We liked his spirit – he gave it a go…”), some forgettable nobody named “Steve Colbert?” (pronouncing that extra “T”…)

Indeed, when Feist played Late Show with Stephen Colbert days before, “Steve” did the voice-over in “Century”:

Of course the crowd still cheered after the false end of “Century”, where it goes quite for the voice-over…

Feist closed Pleasure with record closer “Young Up”, before which she asked for people to slow dance, indeed to come on stage and slow dance, “But not with me…” she added after one lone male fan motioned towards her. Feist is no stranger to letting crowds on stage (QRO live review), but it was a special way to end the record – particularly as the fans up there for “Young Up” were anything but young…

Pleasure received a standing ovation from the crowd, who then stayed standing for the rest of the show. 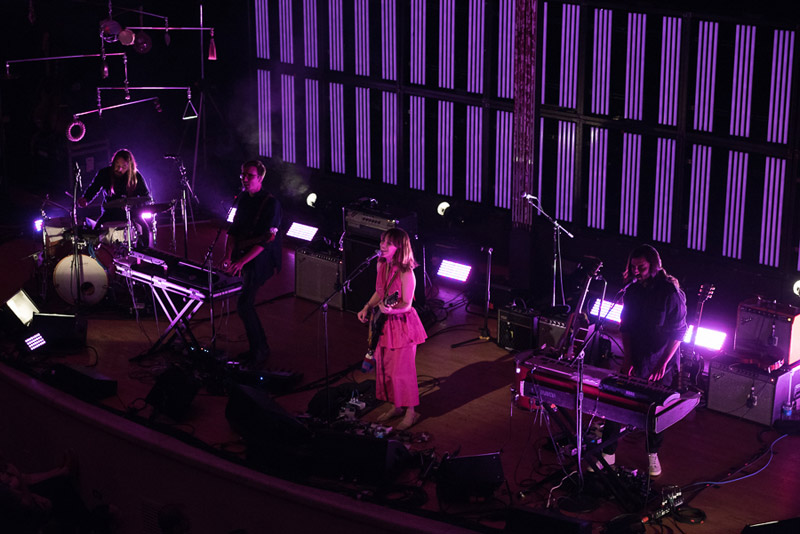 One advantage to ‘playing the new album in full’ is that no regular LP is ever long enough for a full show, especially one that clocked in at over two hours, with no opener, like at Town Hall. This meant that the rest of the evening was old songs, and you know that Feist was going to play ‘the hits’. A similar set-up occurred when Wilco played their new Star Wars (QRO review) last year in full at Kings Theatre in NYC (QRO live review) – first came Star Wars, and then came ‘the hits’.

And as much as the demure Canadian might not want to admit it, she has ‘hits’. Reminder was her huge breakthrough, a bossanova jazz-pop accessible record that made her the one name she is today, and following the end of Pleasure were two songs from it, “My Moon My Man” and “Sea Lion Woman”. The crowd clapped along [your correspondent kept trying to get fancy with his clap rhythm, and screwing up…] – she even got everyone singing along to “Sea Lion” to sing along quietly during the chorus, before building up again to the finish the song.

The two that followed were from the record between Reminder & Pleasure, Metals (QRO review), “A Commotion” and “Anti-Pioneer”, admittedly weren’t as familiar (Feist actually got confused and introduced the latter as from Reminder, before correcting herself), but still got cheers & clap-alongs. Reminder returned with the wonderful “I Feel It All” to big cheers, before going into the encore break with “Let It Die” from her debut album of the same name.

Feist returned solo for the encore, introducing Let It Die’s sad bossanova “Gatekeeper” as, “Something I haven’t tried in a long time,” before struggling with her acoustic guitar and adding, “Lotta chords…” Reminder’s “Intuition” was similarly intimate, with soft sing-along to chorus, “Did I? Did I?”

And the best was saved for last. Feist gave a rambling introduction to the final song, about a friend who disappeared for awhile (“backpacking across Europe … working in a ceviche hut…”), who reappeared with new stories on her face, telling Feist a story that matched a dream Feist had had, which itself was a song she’d somehow already heard (“Just to recap… a psychic dream I had of someone I once knew, and then I wrote a song I’d already heard…”). And it was “One Two Three Four”! Feist has eschewed playing her breakthrough hit in the past, but this rendition was stripped down, slow, and quiet, perfect for the setting, before getting into a big sing- & clap-along for the chorus. She even dedicated it to the people who animate The Muppets, who were all in attendance that night.

Feist had sung a bit of “One Two Three Four” in The Muppets, and a “monster” version on Sesame Street:

It was actually ten years to the weekend since Feist had played Town Hall (presumably fewer nights that time), adding an extra touch to the evening. It was an intimate and special one, Pleasure and more.