In the midst of their latest long North America tour, Felix Rodriguez of Sweden's The Sounds talked to QRO. ... 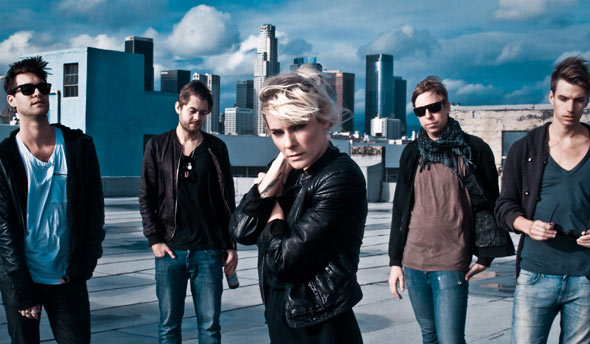 In the midst of their latest long North America tour, Felix Rodriguez of Sweden’s The Sounds talked to QRO.  In the conversation, Rodriguez discussed touring from Mexico to the Arctic Circle, the band taking up production duties on their latest, Something To Die For, making latest video “Dance With the Devil” in the cold with dancers, getting a tattoo on LA Ink, and more…

Felix Rodriguez: It’s been going really well.  We’ve been having a great time.  We always like to come back to the States on tour, so it’s fun to be back and having a ball.

QRO: It seems like you have been in North America a lot this year – I last saw you at Osheaga Music Festival in Montreal at the end of July (QRO recap), and I know you were also over here last spring, including SXSW (QRO recap).  That seems like a lot of American touring for a Swedish act…

FR: Now, when we do a proper U.S. tour, after that, we always have a longer break before than we had before.  We have like two months off before we start the European tour, which is also going to be six weeks.

You need some breaks in between tours, or it’ll wear you out.  If you have enough free time in between the tours, it’s not so hard.

QRO: How does touring America compare with touring Europe?

FR: I would say, when it comes to the crowd, it’s different here.  It’s a different live culture, here in the States, I think.  Most people here come and see shows maybe because they’ve heard about the band, and I would say, at least in Sweden, it’s not like that.  In Sweden, it’s more like, if you have a band that you really like, if they come to town, you might go and see it.

I think here, you like to discover new music by yourself, which I think is better, ‘cause that way it’s easier to tour, and it’s also more fun, because you get a chance to play for a lot of people that maybe haven’t heard you before, and you win them over.

QRO: How did making Something To Die For compare with making prior records?

FR: It was different – we choose to produce this album ourselves.  We felt that it was something that we needed to do; pretty much came natural.

Sometimes it feels like, when you have producers, they might be in the way, interfere too much, instead of helping you out. I think we were looking for that guy who could understand us completely and take us to that next level, but I guess we never found him – I mean, we did find him: I think that was ourselves. We know who we are, what kind of music, what kind of songs, how we want the songs to do.  I think, from now on, we’ll produce our own albums.

QRO: Do you feel like that you needed the learning process of having a producer previously, but you’re at the point now of producing it yourself?  You couldn’t have done it for your first record, but now you can, on your fourth?

FR: Yeah, exactly.  Now we know, going into the studio for so many years, we know how to do it ourselves, as a band.

QRO: You all seemed to go more for an electronic sound on Something – was there something behind that?

It might have been a reaction to the last album we did, which was more guitar-driven and bigger sound, more layers to guitars, I guess.  We never want to repeat ourselves, either.  It just came natural.

QRO: Going from, as you said, “a more guitar-driven” sound to this record, did that mean less work you on this record, since you’re the guitarist?

FR: No, it means more work, when it comes to producing, because mainly means in the control room.  Lot of work that I do in there.  You can always add guitars if you don’t have it on the actual song, because we’re still a band that plays all our instruments.

I would say it’s more work, because you have to work with instrument that’s not your main instruments.  But it’s more fun…

QRO: Is it harder with these songs to convert them to a live setting, as maybe you don’t have all the instruments or equipment live that you did in studio?

FR: No, actually not, no, no.  We try not to have too much stuff on the backtrack machine, either.  We kinda want to keep the live feeling to the songs.

QRO: Did you feel more pressure with Something To Die For, because you produced it yourself?

FR: No, I wouldn’t say I felt more pressure.  I would say I’m more proud.  But you don’t feel that much pressure nowadays, because we know how we write music.

I’m really, really proud of this one, ‘cause we did it ourselves.  I’m not afraid of hearing opinions of people.  If they don’t like it, they can blame us.  If they do like, they can give us the credit.  And that’s the way we want it…

QRO: How was making the video for “Dance With the Devil”?

FR: Oh, it was fun.  It was freezing cold, almost like zero Celsius – which is the freezing point in Sweden.  It was outside of [The Sounds’ hometown of] Helsingborg, old, kinda like castle, in the factory yard, we shot this video.  I thought it was fun to have dancers, and us not acting.

It was different video for us – never done something like that before.  It was fun.

QRO: For at least some of it, you were all just sitting in the background while other people danced in front of you – you were even blindfolded or gas-masked that whole time.  Was it at all annoying, having to be in the background of your own video (which you couldn’t even see)?

We did it for a purpose.  I think that it’s a dance-y track, even though it’s very driven by instruments, I think it made more sense to have dancers dance.  You look at it a different way.

QRO: [Singer] Maja [Ivarsson] stripped down, but the guys didn’t even get their blindfolds taken off until you all were rescued by girls in schoolgirl uniforms & gas masks – how come you guys didn’t show more skin?…

FR: I didn’t have any problems with it. I think that it probably looks better to have the tank tops on.  I think it was better to have it a little bit more, how do you say?, ‘naked’ – even though we’re not naked, you know what I mean?

I think it maybe looks a little more ‘not at a specific time.’  Even though it’s 2011, it still could be…

The Sounds’ video for “Dance With the Devil”:

QRO: Have you gotten support from the government program that sponsors musicians?

FR: We did, the first year, we did.  When we release the first album, they had like a thing called ‘Export Music Sweden’, and they did take maybe ten bands over from Sweden to the States, in L.A., New York.  Hooked up like a ‘Swedish night’ that was supported by the government.

So we did get help in the beginning, which I really appreciate.  I mean, that’s a great thing for a country to do.  Even though we already had a label back then, it still helps.  I think it’s a good thing for government to support musicians like that.

QRO: Whenever playing in America, do you feel like you have to play “Living In America”?

FR: No, not at all.  That was a big song within Sweden, so it became pretty popular in Sweden, Scandinavia.  It’s a pretty big song, for us.  We always play, just because we think it’s a fun song for the audience.

But sometimes we don’t play it.  It’s not like ‘have’ to play it.  It depends on the evening.

FR: Yeah, I like to play “Better Off Dead” live.  That one’s a really tense song.  That’s a great song live.

FR: We have a song called “Lost In Love”.  That’s also a fun song to play live.  We like to throw that in.  It depends on the vibe of the room.

QRO: How does the set list break out on this tour?

We try to mix it up, you know?  Whatever serves the ‘vibe’ of the set.  Little bit new and a little bit old – I think that’s a good mix.

QRO: Are there any songs that you can’t play live, or just don’t play anymore?

FR: Oh, there’s a lot of songs that we don’t play, because I don’t feel like those songs might be us, right now.

But you never know – they might come up one day.  But there are some songs we haven’t played in years.

QRO: What was it like getting a tattoo on LA Ink?

FR: I’m a good friend with [tattoo artist Kat Von D]; I’ve known her for a while.  So it was like being around a friend that tattoos me, and there happens to be a camera in my face.  I’m pretty used to having people around you – I don’t really notice the camera.

It’s a fun experience; it was a lot of fun.  I turned out really well.

QRO: It wasn’t uncomfortable to have a new tattoo while on tour?

Felix Rodriguez getting a tatto from Kat Von D on LA Ink:

FR: Yeah, we did.  Kirona, in Sweden.  And I think we also played in Norway.  The sun never goes down there.

QRO: Do you have any new, post-Something songs?

QRO: Have you been writing for other bands?  You wrote for the Netherlands’s Krezip…

FR: We did a couple of songs with that artist.  I’ve been working with a lot of artists now here in the States – one girl called Kate Late; she was also with us on tour.  A rap artist.

QRO: How does working with other artists compare with working in The Sounds?

I mean, if you work with a rapper, you can sit for maybe weeks with one track, and we didn’t know if that artist is gonna like it or not.  And then you go into a room, and if they like it, maybe an hour later, the song is finished.  So it’s a different process.  You work with yourself, having different ideas of different things, and then one artist comes in and maybe has something else.  But together, if it feels right, you can do magic.  It’s a different process.  It’s fun.

QRO: It seems like you’ve been working with artists farther from home – are you trying to do more stuff ‘away from home’?

FR: Yeah, it’s fun.  It doesn’t really matter where you work.  It’s fun to do it in different cities, and now here in the States, because, in Sweden, you might see one music genre that’s a different touch than it sounds [in America].  If you get the chance to be in different locations, it inspires you in a different way.

FR: We have a lot of tour stories that we keep for ourselves…

I don’t know – it was fun the first time we went to Mexico.  Saw the pyramids.  I love Mexicans.