<img src="http://www.qromag.com/wp-content/uploads/2011/07/figurinesfigurines.jpg" alt="Figurines : Figurines" />Now down to a three piece, Figurines' self-titled fourth album doesn't shine as much as prior work, but is still a nice slice... 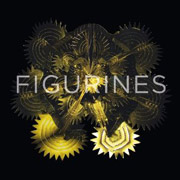 There are still times when Figurines adroitly mix indie-pop cheer with Scandinavian chill.  Clear standout "Free Today" does it best on Figurines, strong indie-pop with a wist in the accomplished chorus.  The sharp vocals and jungle drums of opener "Hanging From Above" move into brightness, while "Lucky To Love" gears up into its own catchy chorus.  The preceding "Poughkeepsie" had the big indie-pop elements of across-the-Øresund Bridge I’m From Barcelona (QRO album review) in the chorus, but a darker verse.

However, there’s not enough of this to make Figurines a great album.  There are also a number of nice ditties that aren’t anything special ("The Great Unknown", "Glee", "Every Week"), while the stripped & slow attempt "We Got Away" doesn’t break any molds, and the psych-twinkle "Call Your Name" is just kind of pointless.  Figurines might not make the group better known in Scandinavian indie-pop circles, but they’re still here.