House of Vans Brooklyn had its final night.... 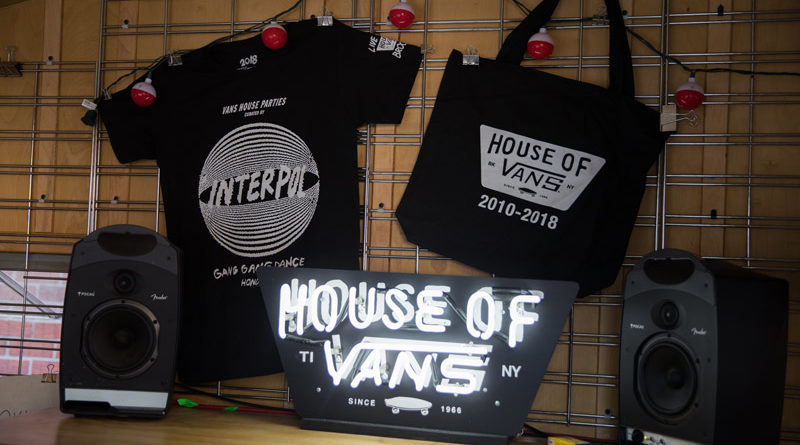 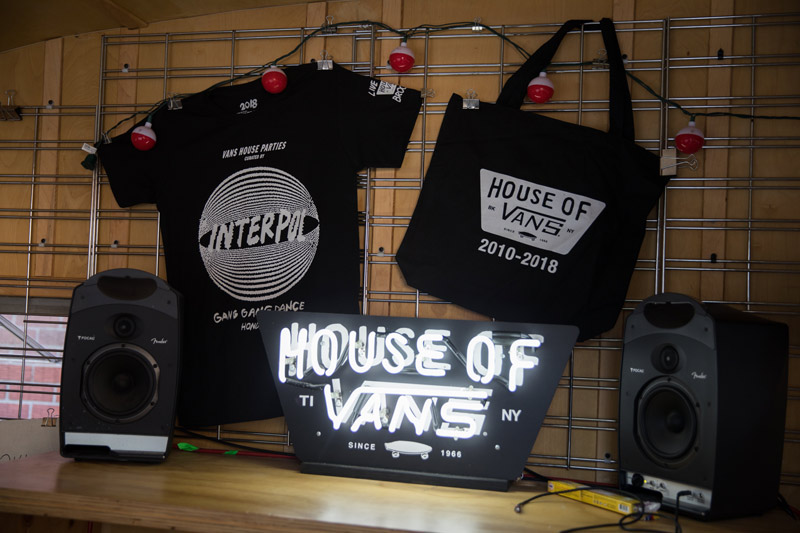 Music venues come and go. History is littered with famed spaces that are no longer here, like San Francisco’s Winterland Arena (with its closing New Year’s Eve 1978 show by The Grateful Dead) or New York’s Fillmore East (which is now a bank). Even Madison Square Garden (QRO venue review) was told to shut down in the next decade. The industry isn’t exactly a moneymaker, and there are tons of pitfalls, from liquor licenses to heightened security concerns to complaining neighbors to someone jumping from the second balcony and then suing for medical expenses. Fans get older, get real jobs, get kids, move to the suburbs, and generally move on. And the relentless drive of redevelopment and gentrification pushes ever onward – a music venue makes an area cool, the real estate is sold for a profit, and the venue torn down for condos in the now cool part of town. 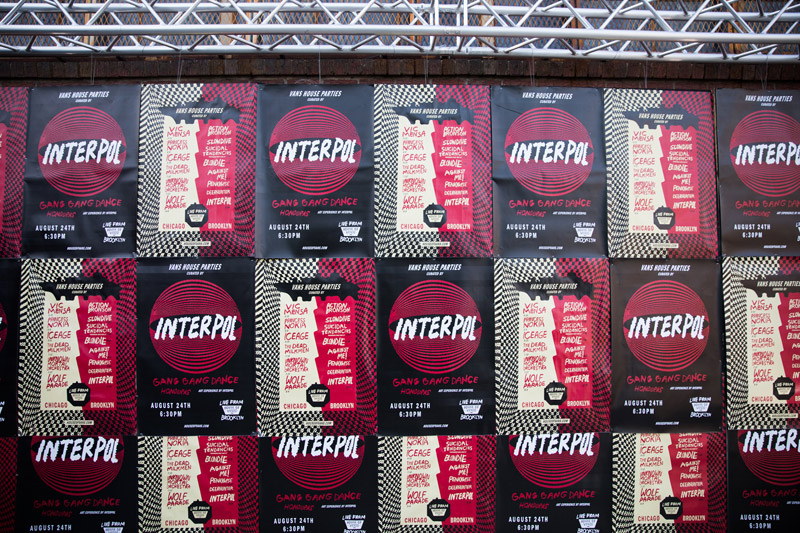 But the final night of House of Vans Brooklyn (QRO venue review) was still a big and special night, Friday, August 24th, with Interpol, Gang Gang Dance, Honduras, and more. 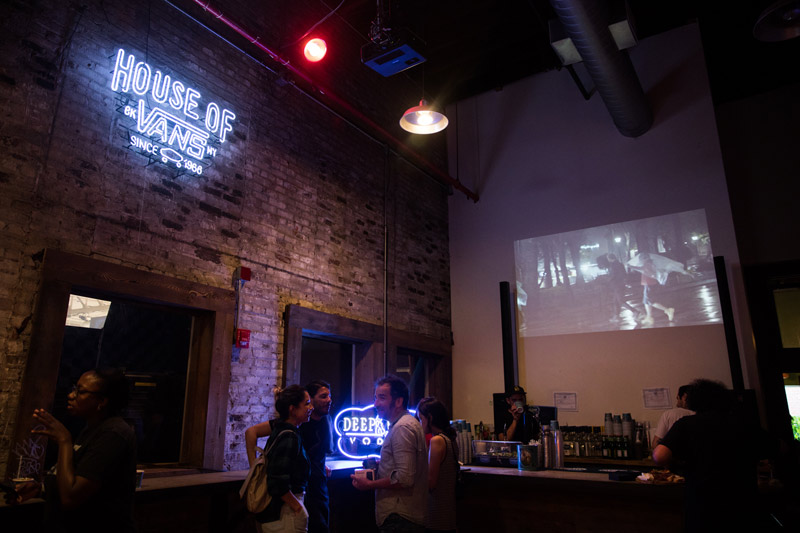 [Your correspondent must first make mention of the early media happy hour, where he and others in the bloggerati enjoyed free drinks, and hors d’oeuvres from Tia Pol. He may just miss VIP bartenders Joe & Blake, plus event organizer/Tia Pol head Michael most of all…]

House of Vans is (or rather, was) a warehouse and outdoor space used every summer by Vans Sneakers to hold concerts, as well as sometimes serving as a rare free skate park in the city. The performers ranged wide across youth genres, from punk to hip-hop to electronica to alternative and more. The shows were always free, as was the beer in the outdoor area (and indoor VIP space, which was also the only place with air conditioning…). All one had to do was RSVP in time, and get there before it hit capacity (which was lower than one might have expected, because if it rained all the people outside would go inside – but that made for more comfortable shows, if you got in). 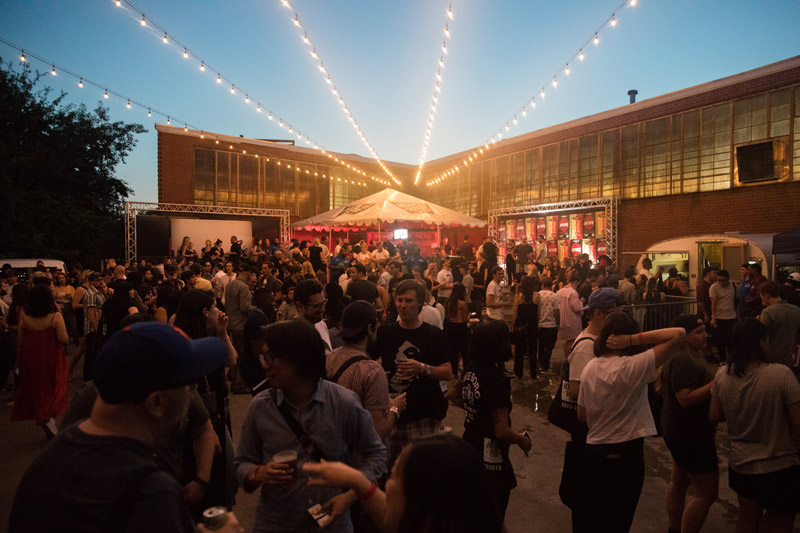 Though this time it was different. This year had already been announced as the last for House of Vans Brooklyn, and when the line-up of summer shows was posted, the final night stood out for more than just being the final night. It was headlined by none other than New York’s own Interpol, probably the biggest act to ever play House of Vans (they’re headlining said MSG in February). Indeed, it was also the record release party for their new Marauder. So instead of the regular open-to-everyone RSVP, there was an ‘enter for a chance to win tickets’ that many, many people didn’t win. 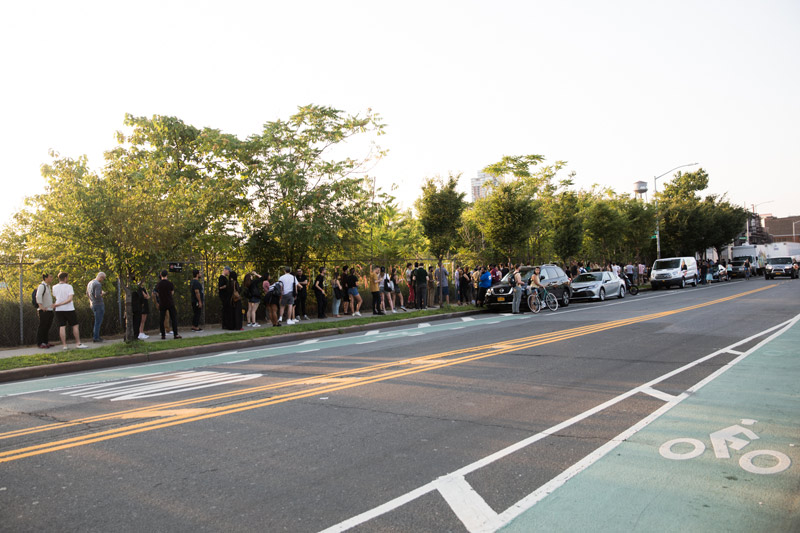 So the regular line at doors wasn’t the longest House of Vans had ever had – but the VIP line certainly was, going down the block. Indeed, it seemed like at least half of the crowd was VIP, with a lot of people who had never been to the space before. Sure, some of them were probably friends of Interpol, and/or fellow New Yorkers Gang Gang Dance or Honduras, but it felt like a lot of the newbies were important people who only finally went to the rather DIY space because it was a big, talked-about night [and not longtime attendees like your correspondent, but he did get to skip that long line…]. That’s something that always happens when a space is closing, people who never deigned to go there when it was just some place they’d never set foot in, then wanted to jump on the bandwagon before it was done (look at the final days of Brooklyn’s Death By Audio – QRO venue review – or Hoboken’s Maxwell’s – QRO venue review). 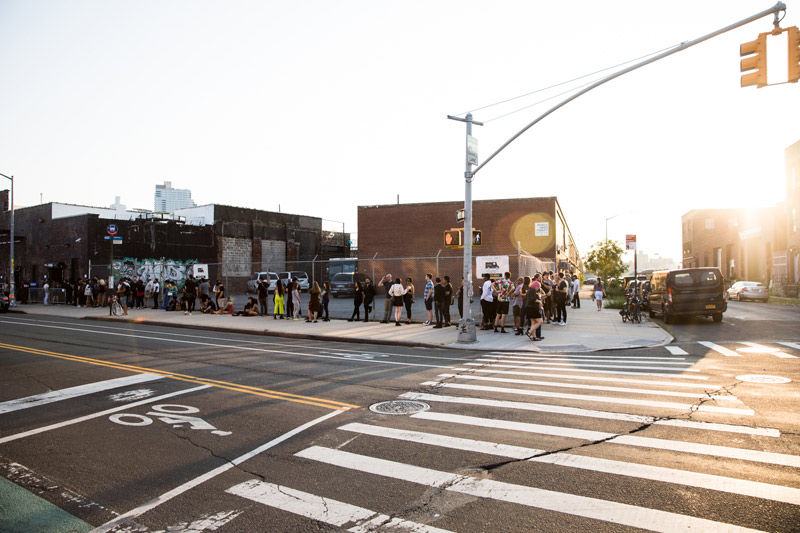 Regardless of who was or wasn’t there – your correspondent did see Nic Offer (QRO interview) of !!! (QRO live review at House of Vans), Ian Williams of Battles (QRO live review at House of Vans), and even Britt Daniel of Spoon – it was still a great final night. It was interesting that the place wasn’t much playing up the ‘final night ever’, save for giving away t-shirts that read ‘House of Vans 2010-2018’ (and House of Vans usually gave away t-shirts made for the night). Perhaps that was because it wasn’t a place selling tickets, or a year-round spot, there was less attachment to it by the people who worked there. Perhaps also Vans itself didn’t want to make too much of it ending, as that could sound like Vans’ involvement in music as a whole was ending. And it had only been around under a decade – long in music venue terms, and for NYC real estate, but not in the grand scheme of things. 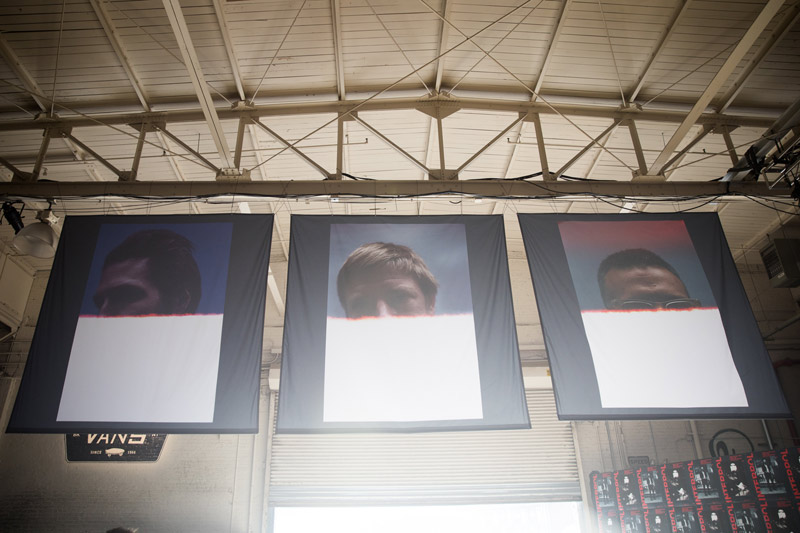 And it was also a night to celebrate the release of Marauder. The place had art chosen by the art-rock band, including a ‘media interview table’ set-up like the album cover, where people could get their own photo behind mikes, and half-finished photos of the trio hanging from the ceiling. 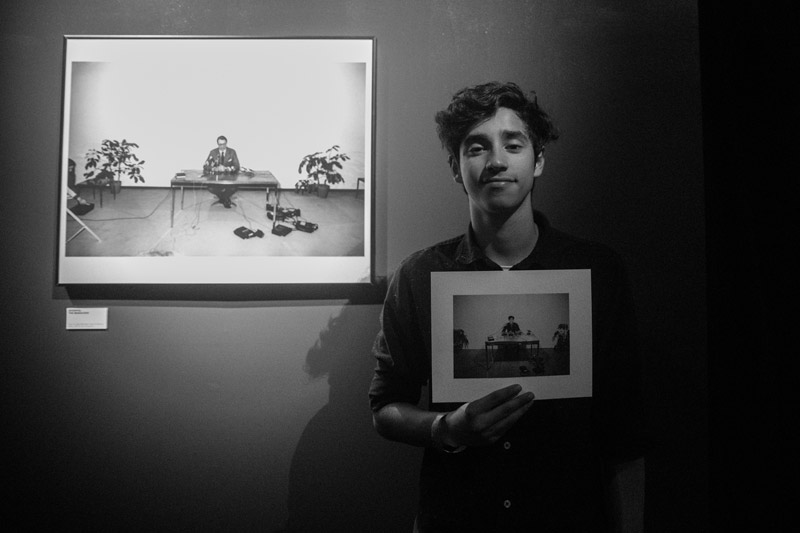 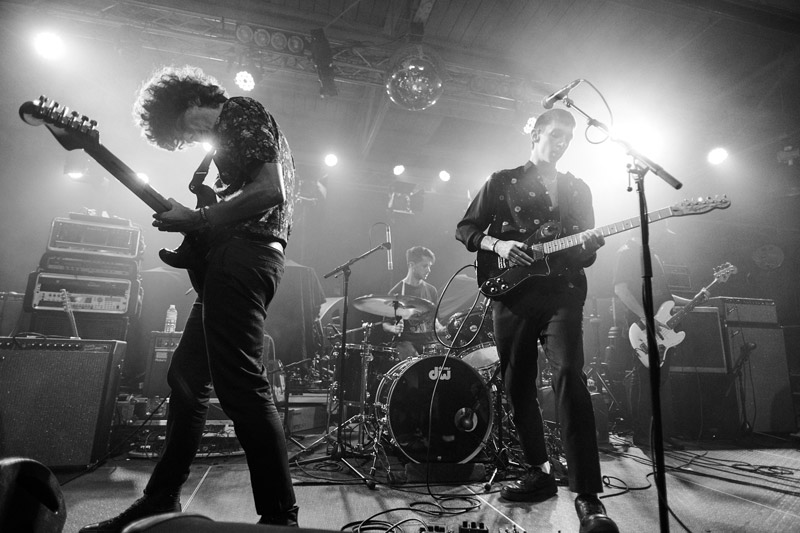 Opening was Honduras, as people were still entering. It was actually neat that the regular RSVP line all got in while the VIP line was still stretched down the block, an hour after 7:00 PM doors. That could have just been because many VIPers were being fashionably late (and thought that they could just stroll in whenever), while the ‘real fans’ had shown up before the posted 6:30 PM doors in case it hit capacity. Honduras didn’t play to tons of people, but they were fun, yet with a dark edge. More garage than Interpol, but they are younger (Brooklyn, not Lower East Side), and did fit the night. 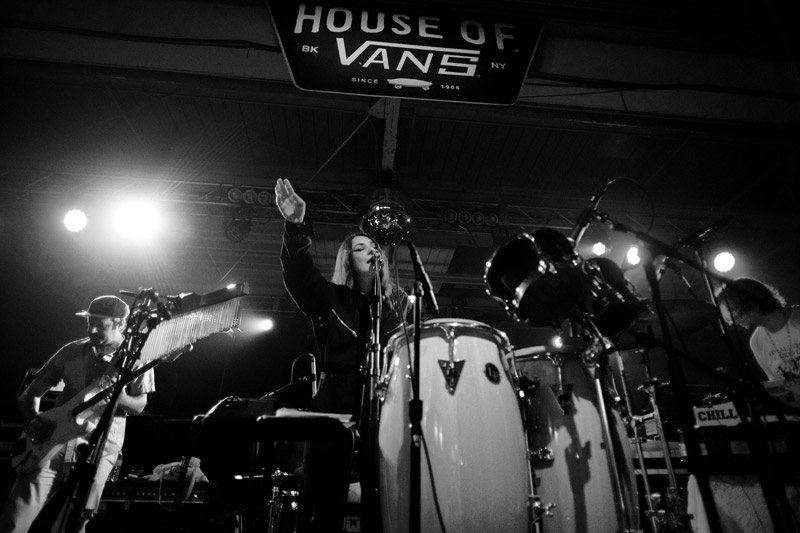 The show also had the return of New York’s Gang Gang Dance – who were quite overshadowed. Their more art-experimental percussion got them noticed in critical circles just under a decade ago (even had a line lifted by Florence & The Machine), but then they disappeared, and there’s been tons of waves of music since then. They did play to more people, but many were just enjoying the final night of House of Vans. 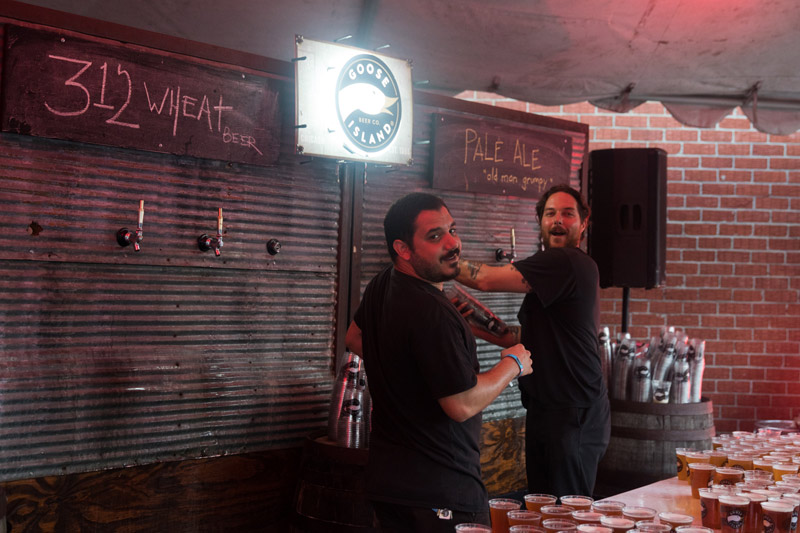 Indeed, if you were a longtime visitor to the place, it was hard not to just enjoy the last show there, over actually watching the music. The outdoor space was relaxed, with a bar with no line – ironically the VIP bar inside had a serious line, because it had mixed drinks & wine, unlike the ‘just beer’ outside, and there were so many fancy-drinking VIPs. 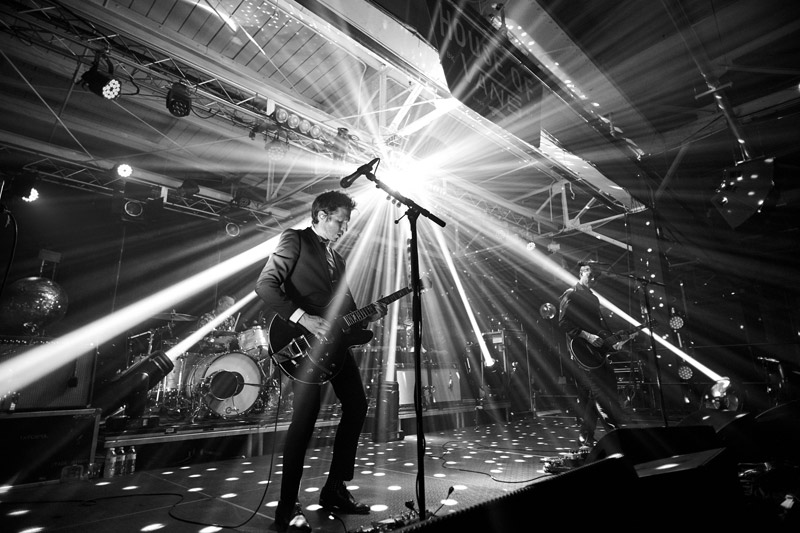 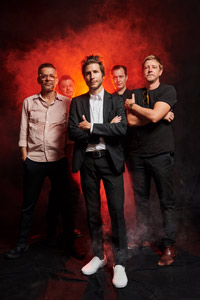 This was even true during Interpol themselves. Being the Marauder release party, of course they leaned heavily on it, starting with “Number 10”, and including single “If You Really Love Nothing”, “The Rover”, and the live debut of “Complications” (but no “Party’s Over” – maybe that would have been too on the nose…). The band always lives in the shadow of their breakthrough Turn On the Bright Lights (QRO photos of fifteenth anniversary show last year), and certainly there was more of a crowd response to Bright Lights’ “NYC” or “Roland” than say, “The Rover” (and the cheers for the live debut of “Complications” were instigated by singer/guitarist Paul Banks telling the audience that it was the live debut). But that’s always the way with new songs, as they’ve gotta be new before they get old, and Marauder certainly fit with their back catalog. 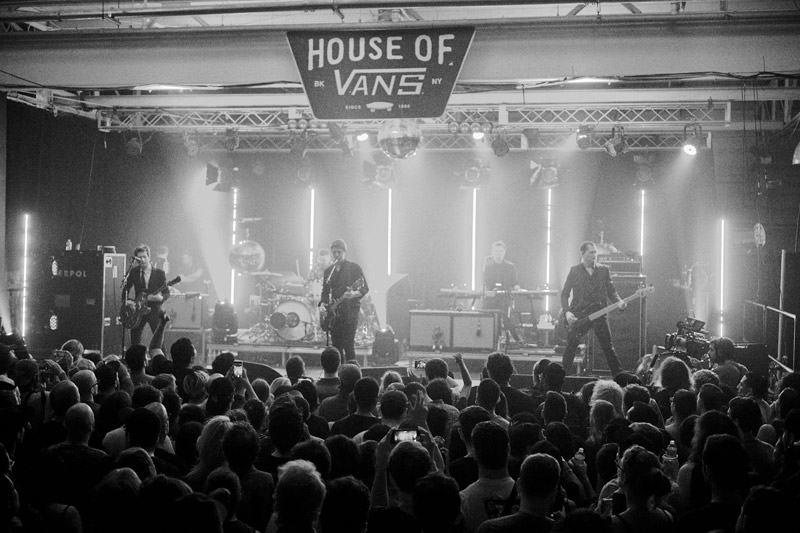 Of course Interpol closed with a Bright Lights song, “Obstacle 1”, before sending folks out for the last time. And of course there was an after-party for VIPs after that, which included more alcohol in better ways (even beer in bottles, not plastic cups), crazy amount of Mexican food, and a mechanical bull, for some reason (but one doesn’t really need a reason to have a mechanical bull…). 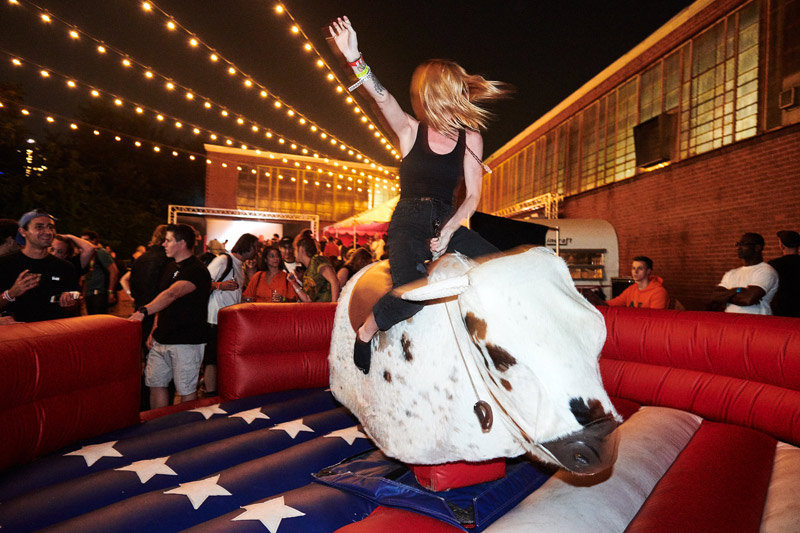 Vans is certainly not getting out of involvement with music. There’s still a House of Vans in Chicago and London, and the company will be doing pop-ups in NYC in the coming years. And the Brooklyn location shut down before the L train tunnel does, making the closest stop at Bedford Avenue a lot harder to get to. But it was a great way to end a great space. 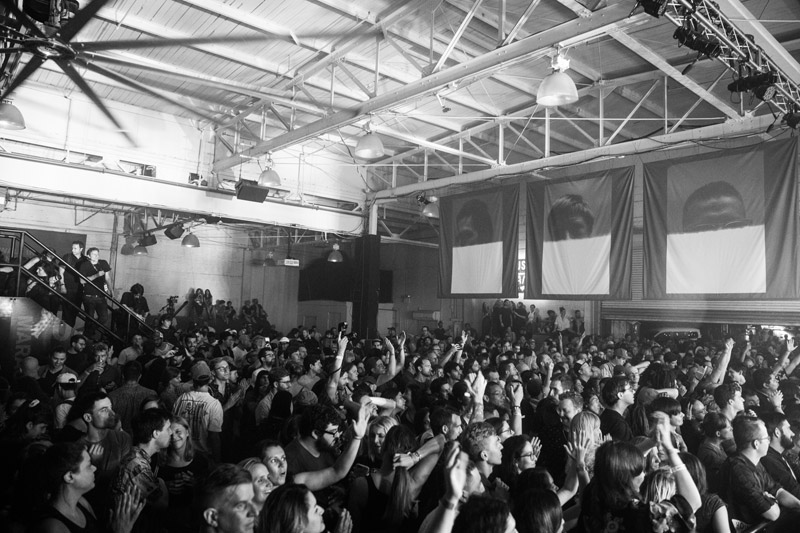