So many people who had shocked & surprised back when, fail to do so in the here & now.... 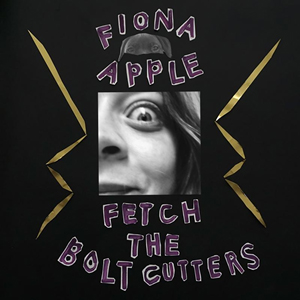 So many people who had shocked & surprised back when, fail to do so in the here & now.  Figures went from being “breakthrough” or even “controversial” into referred as “veterans” and even “legacy acts.”  Fiona Apple certainly shocked the MTV world of the nineties by taking on the whole concept of the MTV world, but it would have been easy, even expected, for her to turn into a figure of that era, respected but no longer revelatory today.  Yet Fetch the Bolt Cutters blows that all up in an explosive and original record.

As much a poet as a singer even in her early pop peak, Apple leans into that whole-heartedly on Fetch, with tracks that are as much spoken word beat poetry as they are catchy tunes.  The use of prominent, often arrhythmic percussion is jarring but captivating, grabbing one’s attention and keeping it throughout.  And these are musical styles that are so often misused that they’re usually seen as a joke, self-indulgent coffee shop artiste, yet Apple doesn’t just rise above that stereotype but blasts past it, confident and skilled.

Yes, Fiona Apple takes on being a woman throughout Fetch (the title is about cutting from what ties you down – and a quote from fellow nineties pop culture feminist icon Gillian Anderson in The Fall), but it’s a take of today, unashamed in past shame, critical take-downs of what keeps women down.  There’s toxic partners like the humorous alpha male dinner party “Under the Table”, the bad ex treating his new woman bad “Newspaper”, and direct call-out of abuse “For Her”.  But there’s also denouncing the ‘woman vs. woman’ trap, like “Newspaper” and the wry “Ladies”, Instagram influencer culture “Relay”, and moodier jazz diva on depression “Heavy Balloon”.

Released early as we all got stuck in lockdown, Fetch the Bolt Cutters has garnered massive praise, from a perfect 10.0 on Pitchfork to Gillian Anderson tweeting a gif of her title line in tribute, briefly becoming the biggest thing since Tiger King.  But it actually deserves that praise, both of its time and timeless, Apple shocking & surprising like never before.