<img src="http://www.qromag.com/wp-content/uploads/2012/07/fionaappletheidlerwheel.jpg" alt="Fiona Apple : The Idler Wheel..." /><br /> Everything from the nineties is coming back, so why not Fiona Apple? ... 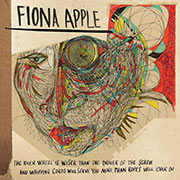 Everything from the nineties is coming back, so why not Fiona Apple?  She was an MTV ‘It Girl’ in the mid-nineties thanks to songs (and videos) like “Criminal”, and even denouncing the whole enterprise at the 1997 MTV Video Music Awards couldn’t stop her.  But then came break-ups (including with director Paul Thomas Anderson), on-stage meltdowns, hiatuses, and more.  Now Apple is back with The Idler Wheel Is Wiser Than the Driver of the Screw and Whipping Cords Will Serve You More Than Ropes Will Ever Do (or just The Idler Wheel… – it’s still less than the 400 characters of her second album…), her first album in ten years, and while it hews more to the more stripped (sonically) Apple of this century/millennium, it’s still the Fiona Apple you remember.

Idler opens with first single “Every Single Night”, which actually sees a sliver of a smile from the notoriously tempestuous songstress, but the record is less about smiles and more about chaos, albeit one largely confined to Apple’s bossanova piano and vocals.  There’s a definite jazz-singer style to the album, but with an out-of-control sway like a storm-tossed ship (“Jonathan”) or seemingly all of Apple’s relationships (“Left Alone”) – even “Werewolf” is more a post-chaotic relationship cleaning up of the debris strewn about.  It’s a particular style, which reaches its apogee in the penultimate “Anything We Want”, which does disjointed in the way a million-and-one of today’s new would-be-auteurs only wish they could.

Fiona Apple is never going to win over the people who hated her a decade-and-a-half ago, and she’s not going to be as revelatory as she was back then, either.  But that could be said for all of the many, many mid-nineties acts who are back these days (and at a ten-year gap in output, it had been a full-fledged hiatus).  But she still is the songstress who drew all those eyes & ears ‘way back when’.

MP3 Stream: “Anything We Want“