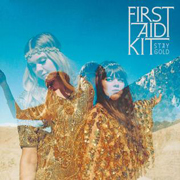 Country songstresses have been popular since there’s been popular music, but have seemingly gotten a bigger boost in more recent times in the alt-sphere (sort of ever since Kate Austen sang along to Patsy Cline in Season One of Lost…) – though of course now it’s called ‘alt-country’ (which really just means today’s ‘good country’). While sisters Johanna & Klara Söderberg hail not from Middle America but northern Europe (Sweden), they didn’t stand out on their still-nice debut, The Lion’s Roar (QRO review). With Stay Gold, they still don’t reinvent the sound, but do deliver even better.

Gold shines brightest at its start, with songs like the “keepin’ on, keepin’ on” of “My Silver Lining”, the slight afro-pop backbeat to “Master Pretender”, and sadder and grander title track. Yes, this is an alt-country lady sound that you’ve heard already on the radio these days (“My Silver Lining” can’t help but remind of Jenny Lewis’ “Silver Lining”), and it becomes a little more run-of-the-mill in the back half on woodwind-aided tracks such as “The Bell” and “Fleeting One”, but it’s a very sweet one.

Just because a sound is popular these days shouldn’t diminish it, even in the alt-sphere. So Stay Gold, ponygirls…