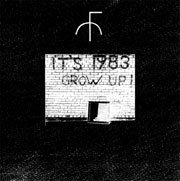 About the only thing the Canadian band Fist City has in common with country singer Loretta Lynn, who wrote a song with the same name, is a raw, punk attitude of destroying anything that gets in your way.  Fist City comes out swinging on It’s 1983, Grow Up! with their own anti-authority aesthetic for a different millennium.

Fist City began in Lethbridge, Alberta and the band quickly became friends with Paul Lawton of The Ketamines who also is part owner and engineer at Mammoth Cave Studios, where they ended up recording their debut, Hunting You.  Covered in layers of fuzz, it was their own damaged hybrid of surf and punk.  On their latest, out on cult purveyors Black Tent Records, the band returned to record with Paul, whose own gritty garage aesthetic is a natural match for Fist City’s hyper, guitar-centric sound. But it’s roots still remained in stripped down challenging punk.  Lead singer Kier Griffith eerily resembles Ian Svenonius’ (QRO photos) high register blues and soul vocal style, along with The Make-Up’s (QRO photos) similar combination of disparate influences.  But Fist City has a secret weapon in bassist and twin, Brittney, which gives the record it’s distinct, manic sound. Like the revolutionary D.C. band, they’re after something that lies beyond punk, the categorization is merely a way of thinking and an approach to creating outside traditional avenues instead of the typical three chords and anarchy.  Instead Fist City’s destructive streak is turned inward on the track, “Creeps”, in which Kier’s vibrato describes some bad, late night decisions over a bouncy tom beat, a ferocious attack that’s trying to bury the blues pain just under the surface.

Will you drive a little faster? / I want to die in a disaster

The classic story of an attraction for all the wrong reasons with their unusual, cavernous guitar distortion and Kier’s spitfire vocal that seem to come from separate claustrophobic spaces, but always finds ways to snap together in two minute bursts of epic pop-punk.

On "Endless Summer", Kier delivers his vocals in an ethereal tone… an eerie approach in this devastating combination of cold and calculated jagged rhythms under the guise of this laid back, summer time jam.  This kind of duality might be attributed to working with a twin this closely, they could be just opposite enough to challenge each other’s approach musically, while hopefully remaining supportive in the same band…at least for now.  Evan Van Reekum, on guitar, is positively the driving force behind the album, which is propelled through his exacting energy that compliments Kier’s unique vocal ability.

They have crafted catchy, easy to love, polished tracks.  Kier is railing against the world with real song craft and a meticulous post punk sound with pop-punk sensibilities.

"It’s 1983, Grow Up!" says a nameless authority figure… as if the year had anything to do with coming of age.   The grainy black and white photo of a brick wall on the cover, and their denim jacket ready logo, tells you this was punk all along.  It just sounds so damn good it’s hard to tell sometimes.