On the second night of FKA Twigs RBMA residency in New York, the audience slowly became aware of a violinist on stage... 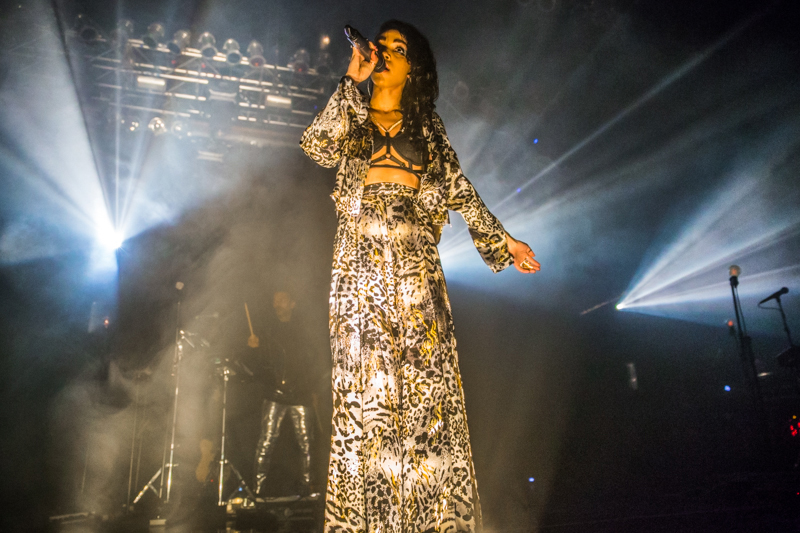 Click here for photos of FKA Twigs at 2015 Lollapalooza in Chicago, IL in the QRO Concert Photo Gallery

Click here for photos of FKA Twigs at 2015 NOS Primavera Sound in Oporto, Portugal in the QRO Concert Photo Gallery

Click here for photos of FKA Twigs at Terminal 5 in New York, NY on May 18th, 2015 in the QRO Concert Photo Gallery

On the second night of FKA Twigs RBMA residency at New York’s Brooklyn Hangar on Monday, May 18th, the audience slowly became aware of a violinist on stage. Behind the violinist, illuminated through the fog by a dim light, could be seen the dull shine of musical instruments and sound equipment; a gong, a simple drum kit, synthesizers and samplers, electronic drum pads mounted on stands at head height causing those played them to invoke a similar technique to that of monks that deal with church bells.

The performance took the shape of an extended FKA Twigs video, sexuality strewn with unnerving capabilities of the human form. Her cast of dancers, most of them long-time friends and collaborators, was comprised of krumpers, voguers, ballet dancers, bone-breakers, and contortionists. The stage set, comprised mostly of the aforementioned barely visible backdrop of musicians, lights, fog, and a small rotating platform, provided the visual flexibility necessary to keep up with the many textures of Twigs’ music.

The show included some of NYC’s biggest names in dancing, and the pioneers of vogueing – at one point they even cast Twigs off the stage and conducted a vogue session of spectacular intensity. Benjamin Milan, wearing a white silk kimono emblazoned with a gold dragon, was ever-present through the night, a type of muse or guide as the other dancer lined up in front of Twigs like suitors or subjects.

That tension between being controlled and being in-control was prodded throughout the night. It was present when Twigs was spinning on that rotating platform twisting herself around a muscular, man-bunned dancer and being tossed in the air by said dancer, during “Papi Pacify” or when she stepped into a row of lasers so that her sequined vest turned into a disco ball as she was followed around by her cast of dancers, or when the dancers bowed at her feet – yet when they turned their heads and walked away, she chased after them.

The music of FKA Twigs is control marbled with chaos. The texture is drawn from the palate of dark industrial dance, hip-hop, and R&B. Obtuse, intrusive noise fills space between curated silences – only for a few measures might disarray give way to rhythm and give the listener any shot at traction. As soon as you’ve wrapped your brain around a rhythm, the beat changes and knocks you off balance. Those moments when control seems to have been ceded are the moments in which FKA Twigs music is most powerful, and the same is true of her show. The moments when it seemed your unwavering gaze upon the stage could never be broken, when it seemed that nothing could’ve existed outside the walls of that hangar in Brooklyn came during those moments of cathartic loss of control, when the boundaries between submission and dominance are being blurred by Twigs and her dancers.