New Jersey native Cari Fletcher, a.k.a. FLETCHER, took to the stage to perform to a packed house at the Brooklyn Bowl in Nashville.... 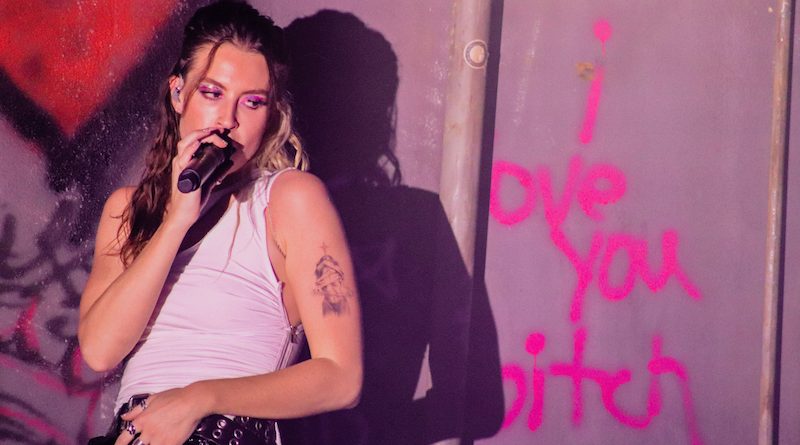 Click here photos of FLETCHER at 2022 Lollapalooza in Chicago, IL in the QRO Concert Photo Gallery

Click here for photos of FLETCHER at 2022 Forecastle Festival in Louisville, KY in the QRO Concert Photo Gallery

Click here for photos of FLETCHER at 2022 Hangout Festival in Gulf Shores, AL in the QRO Concert Photo Gallery

Click here for photos of FLETCHER from Music Hall of Williamsburg in Brooklyn, NY on December 9th, 2016 in the QRO Concert Photo Gallery

On Monday, March 14th, New Jersey native Cari Fletcher, a.k.a. FLETCHER, took to the stage to perform to a packed house at the Brooklyn Bowl in Nashville, TN. The singer, best known for her smash hit “Undrunk”, entered the stage with her recent single “girls girls girls” as the building took to an uproar of screams. After releasing THE S(EX) TAPES in 2020, this tour was finally FLETCHER’s chance to showcase the new songs that she had put out during the pandemic.

The setlist contained a solid mix of songs from THE S(EX) TAPES, recently released singles, and tracks from the 2019 EP, you ruined new york city for me. FLETCHER even threw a few unreleased pieces into the mix, such as “Cari’s Song”, a sentimental song written for herself, and “Fuck You For Ruining New York City For Me”, which paired very well with her amazing cover of “Happier Than Ever” by Billie Eilish.

FLETCHER was only getting the hype and dancing started for the night with “girls girls girls”. She soon moved into performances of other dance-worthy hits, such as “Forever”, and “Cherry”, which features singer Hayley Kiyoko.

Artists usually make Nashville shows extra special, and FLETCHER definitely followed this trend. After the first few songs, she announced that she had a special guest to bring out. After teasing it for a minute, she invited young hit country artist Ingrid Andress to the stage, to perform FLETCHER’s hit “About You”, which was written by Andress. But she was not done with surprises for the night. After performing other hits such as “If I Hated You”, “Feel”, and “All Love”, she welcomed country superstar Kelsea Ballerini to the stage to perform a beautiful acoustic version of the iconic Fleetwood Mac song, “Landslide”. The crowd erupted in screams as Ballerini entered the stage, and you could hear everyone in the building singing along as the duo covered “Landslide”.  It was very noticeable how special of a night this was for FLETCHER, and it seemed as though she did everything in her power to make the night just as special for everyone in the audience.

FLETCHER noted how this was her first time playing this venue since she opened for LANY a few years back. She was definitely not messing around when she decided to do her own headlining tour. It was obvious that a lot of thought and detail was put into the making of the stage setup and production. The stage setup featured a very intricate infrastructure design, that FLETCHER stated was designed to look like New York City. Her stage presence was amazing, as she constantly climbed up and down the ladder that led to the top of what was meant to be a NYC building, and never left the crowd unengaged. She even hopped down off of the stage at one point and signed the boobs of fans within the first few rows of the crowd.

After the show, FLETCHER’s bassist Sophie hung around to talk to lingering fans until FLETCHER herself eventually came out by her tour buses to greet fans that waited. She was so beyond sweet to every fan she met and took photos with everyone, while also signing items and even writing out tattoos for a few fans. FLETCHER definitely made this night in Nashville a memorable one with her kindness, talent, and energy. Be sure to catch FLETCHER in a city near you!