Flight of the Conchords – Live In London

Flight of the Conchords return!... 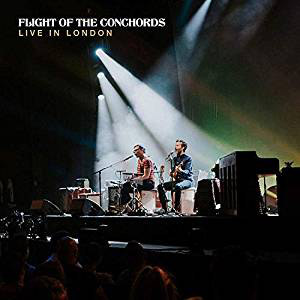 New Zealand duo Flight of the Conchords, Jermaine Clement and Benjamin McKenzie, took the comedy music world by storm over a decade ago with their HBO series, but it was unsurprising that they moved on rather quickly, with only two seasons and two full-lengths, Flight of the Conchords (QRO review) and I Told You I Was Freaky (QRO review). Their individual success in movies like The Muppets and television like Legion was likewise not surprising – but they have since returned to their Flight, though you kind of always knew that they would. A great live tour (QRO live review), including a ton of new songs, has been commemorated in Live In London.

While there are some classics from the prior records and series on the live album, the bulk of London is new material, something that undoubtedly helps. Any comedy record loses bite with familiarity, and Freaky in particularly suffered from that, but the only folks who know the new songs on London are those who saw the tour. Yet Flight of the Conchords is notable for having funny songs that hold up on repeated listen, from early pieces such as “Robots” to today.

Click here for QRO’s live review of Flight of the Conchords at Central Park SummerStage in New York, NY on July 24th, 2016

Click here for photos of Flight of the Conchords at 2016 Newport Folk Festival in Newport, RI in the QRO Concert Photo Gallery

Click here for QRO’s review of Flight of the Conchords at Radio City Music Hall in New York, NY on April 14th, 2009

The album opens with “Father and Son”, a great usage of both their duet voices and surprises in their scene setting. Bouncing off each other as characters has long been strength of theirs, though on London it’s less done in songs (Clement does play a girl on sexy office romance “Iain and Deanna”, usually McKenzie’s role), and more in the between-song banter. The new songs stretch both the group’s conceptual and sonic wings, doing varying styles of music (not unlike Weird Al Yankovic, who every comedy music performer will always be compared to). “Summer of 1353” has medieval recorders with Clement’s wooing of McKenzie, “Stana” a country gallop about a man so bad his name was an anagram for “Satan”, “Seagull” an airy non-metaphor about an actual, piano-playing seagull, and “Shady Rachel” some cool cat jazz with one spoon. The variety in sounds gives the album the diversity it needs for repeated listens.

It should also be noted that the spoken parts hold up surprisingly well. While wonderful moments in a live show, such stories naturally lose almost all of their power, but Conchords’ humility and interplay keep such anecdotes as “Complimentary Muffin” and “One More Anecdote” fresh. That doesn’t keep up as much in some of the longer songs, like “Stana” and “1353”, which are too long live (and undoubtedly would be shorter on a studio release).

While mostly new, there are some golden oldies on Live In London. Interestingly, the earliest ones are not the most familiar, like the mock-Pet Shop Boys “Inner City Pressure” or badly spoken French “Foux du Fafa”. It is only on the second disc that the ‘classics’ come out, including Bowie tribute “Bowie”, perhaps their most iconic piece, “Robots”, and closer “The Most Beautiful Girl (In the Room)”.

Though obviously not a replacement for seeing them live (or the DVD of this performance), Live In London is a great return for the funny and musical Flight of the Conchords, worthy of many listens.