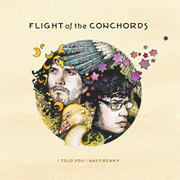 An artist’s second output is always fraught with risk, whether it’s a band trying to follow-up on a breakthrough debut album, or a TV show coming up on its second season after a hit first year.  But Flight of the Conchords have faced both: the 2008 second season of Flight of the Conchords on HBO, or now with this year’s follow-up to last year’s post-HBO debut full-length, Flight of the Conchords (QRO review).  Everything was trickier, second time ‘round, for Jemaine Clement & Bret McKenzie.  They couldn’t build their show or album around pre-HBO songs like “Robots” or “Business Time” (from 2007’s Grammy-winning The Distant Future EP).  Expectations were raised for America’s favorite New Zealand export since The Lord of the Rings films.  Their act, from songs-in-the-stories & stories-in-the-songs to their characters & personalities, is no longer new & novel.  And like the second season of Flight of the Conchords on HBO, their second LP on Sub Pop is good, but not as good, more disjointed and inside, also borrowing more from outside sources.

While the first season of Flight of the Conchords saw the band try to wedge already-written songs into more ‘standard’ episodes, season two saw them write songs specifically for the show, and the episodes were built around those songs.  That meant that in season two there was perhaps a better flow, story-to-song and back again, but the season two songs that make up record two, I Told You I Was Freaky, are way more dependent upon the listener knowing the episode.  Not only does that obviously leave a large audience out of the loop, but it also makes the songs less fresh on first listen (since you saw them on TV), as well as on subsequent listens (because it’s just being reminded again about seeing them on TV).  Tracks like “We’re Both In Love With a Sexy Lady” (about Clement & McKenzie both falling for missing epileptic dog owner Kristen Wiig, of Saturday Night Live) and “Friends” (with not only ‘third Conchord’ Rhys Darby, but also his character’s friend, played by Andy Richter of Tonight Show with Conan O’Brien) are the most in this vein, but even the record’s title track gets that way, thanks to its memorable visual performance on the show.  And it really gets dicey when you can’t remember the episode, like with “Demon Woman” or random gypsy number “Petrov, Yelyena and Me”.

There are still some tracks that are not as episode-dependent, but too often they just remind you of great songs from the first album.  Catchy mock-hip-hop opener “Hurt Feelings” in right in the band’s vein, while still being general enough to have been in any episode, but can’t shake the similarities to Flight‘s “Hiphopopotamus vs. Rhymenocerous”.  Mock-sexy songs like “Sexy Lady” and “Freaky” are no “Business Time”.  The techno-dance of “Too Many Dicks On the Dance Floor” is utterly memorable, but still ain’t “Robots”.  “Fashion Is Danger” take on techno-glam eighties David Bowie (QRO album review) can’t beat Flight‘s take on seventies-glam Bowie, “Bowie”, any more than the Thin White Duke’s eighties work can beat his seventies material.

And that’s another thing about Freaky – Clement & Jemaine seem to rely a lot more heavily on aping the styles of other artists, to the point where certain tracks feel like a certain already-famous song, just with new words – a.k.a., the Weird Al way.  “Fashion Is Danger” more directly apes Bowie’s “Fashion” than “Bowie” ever aped any specific Bowie song.  “Rambling Through the Avenues of Time” sounds like Billy Joel’s “Piano Man”, just sung by McKenzie with an acoustic guitar (and comments inserted by Clement).  Clement’s own “Carol Brown” recalls Paul Simon’s “50 Ways To Leave Your Lover” so much that he actually says, “There must be 50 ways that lovers have left me”.  And “You Don’t Have To Be a Prostitute” feels like a more reggae version of Sting’s “Roxanne”, albeit McKenzie singing about Clement being a prostitute.

Of course, there’s a lot to like about Weird Al (thus his recently-released Essential Weird Al), and there’s a lot that’s funny on I Told You I Was Freaky, just as there was a lot that was funny in season two of Flight of the Conchords.  But, following the season, ten of Freaky‘s thirteen tracks were released as iTunes singles, so most fans probably have some-to-most of Freaky already, and that ‘we’ve been here before’ feeling pervades the record.