Returning to the banks of the San Marcos River, Float Fest continues to be a popular way to beat the brutal Texas summer heat with some tubing and some... 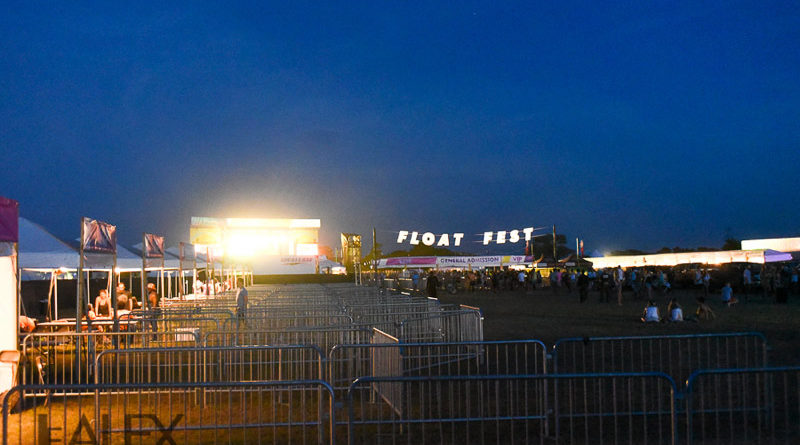 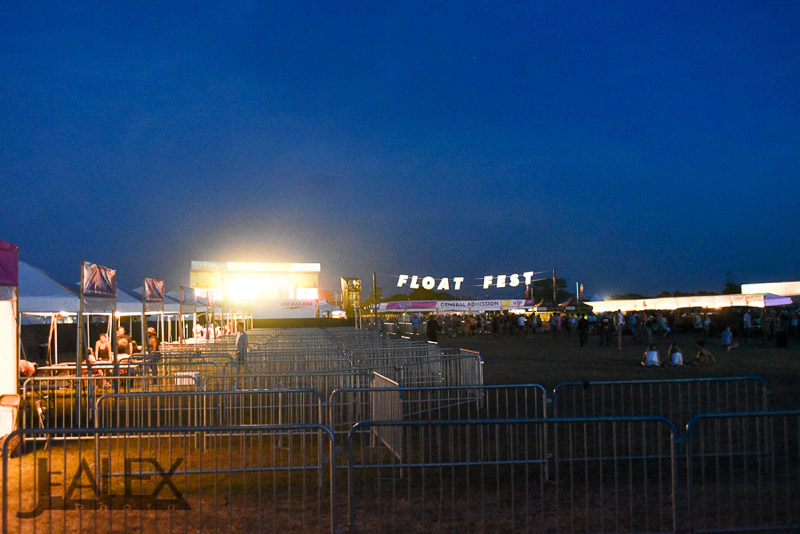 Returning to the banks of the San Marcos River, Saturday & Sunday, July 22nd & 23rd, Float Fest continues to be a popular way to beat the brutal Texas summer heat with some tubing and some tunes. The sold-out festival saw the largest audience in its fourth year with an estimated 15,000 mostly college-aged concertgoers streaming in over the course of the weekend to boogie down to electronic leaning acts Zedd, Girl Talk, and Passion Pit on Day One and rock out to Weezer, MGMT, and Cage the Elephant on Day Two. A strong undercard of Texas-based artists such as Neon Indian, Mike Jones, and Sweet Spirit, rounded out the one of a kind event.

Fans with VIP passes lined up as early as 10am on Friday to score the best camping spots and ease some of the congestion that typically hinders the first day of the festival. Nature’s air conditioner, the San Marcos River, proved to be the best place to chill during the hottest part of each dusty day. Additionally, the organizers provided hydration stations and a new air-conditioned tent, the Frigid Float Lounge, which saw plenty of use throughout the weekend. With a wider footprint than in previous years, pineapple and flamingo swimsuit-adorned attendees hit up food trucks, carnival attractions, and the newly added helicopter rides area that provided an aerial view of the tent village and what looked like cheerios floating down river. 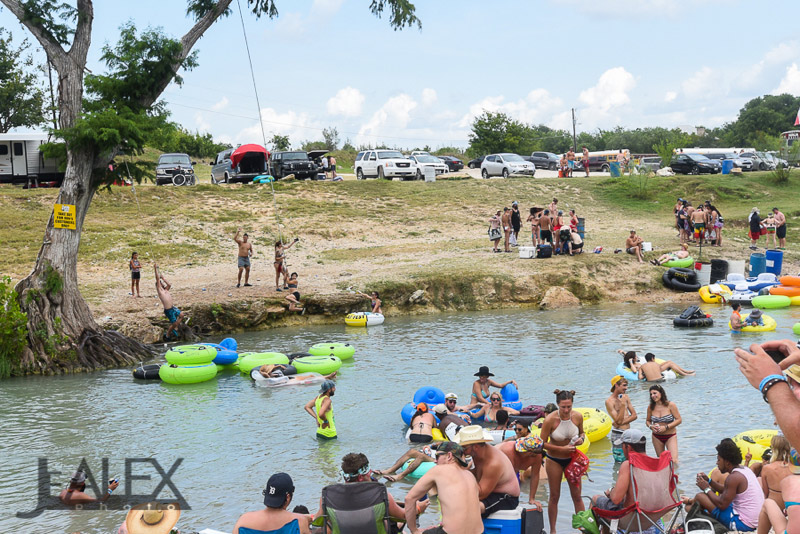 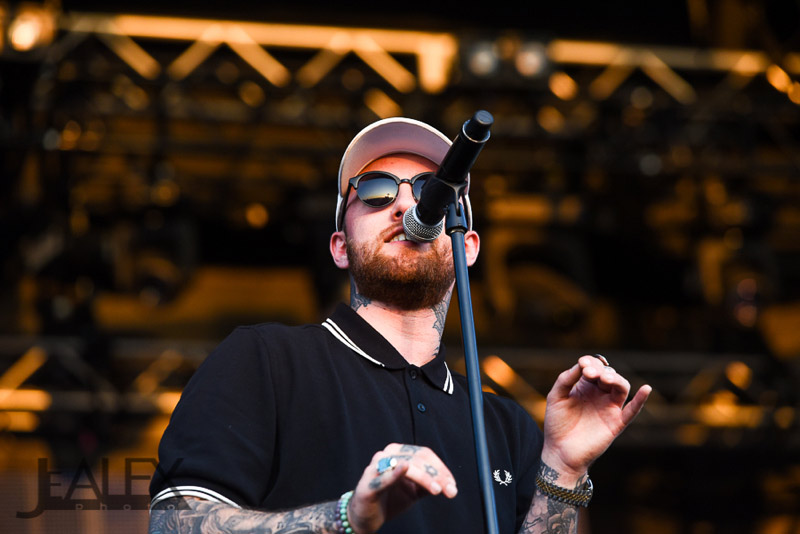 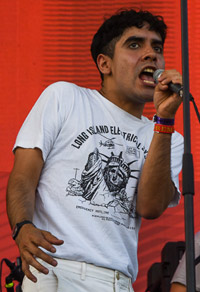 As in previous iterations, the 100 degree temps kept crowds low during the early acts, but as the late afternoon sun began making its way to the horizon on Day One, hip-hop heads got turnt up for back to back Houston rappers, Lil Flip and Mike Jones. Another Texas-based artist Neon Indian switched things up, bringing reggae and electronic-tinted grooves in their all white attire. At the Sun Stage, Pittsburgh rapper Mac Miller drew a large crowd that was joined by lady friend Ariana Grande on side stage. As darkness arrived another Pittsburgher, Girl Talk, lit up the joint with his crowd pumping mashups, showering glow stick holding fans with in what looked like a metric ton of confetti and toilet paper. 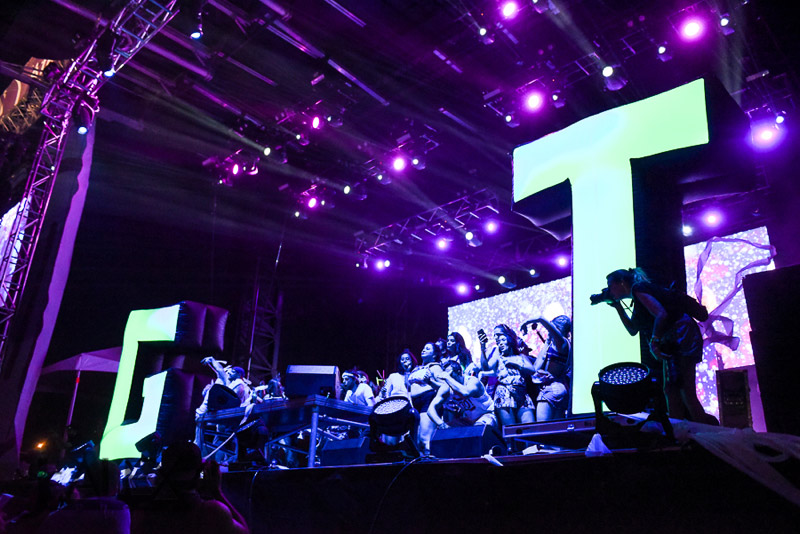 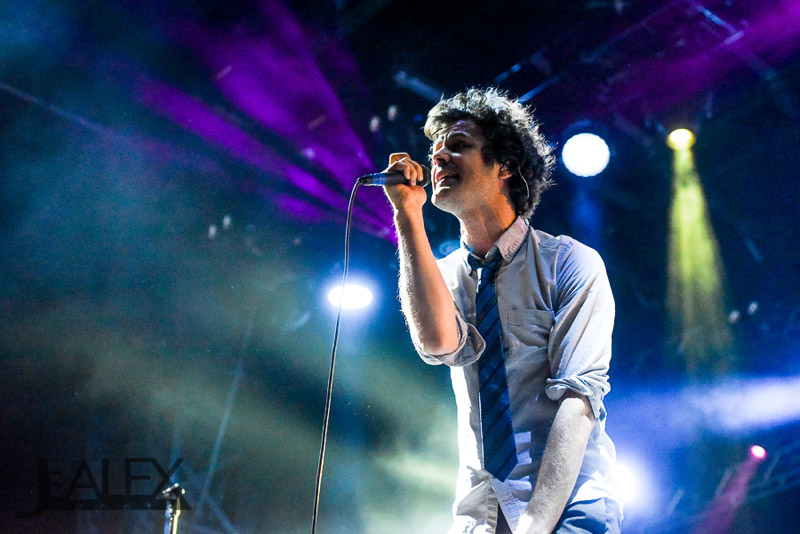 Celebrating the fifth anniversary of his sophomore album Gossamer (QRO review), Passion Pit’s Michael Angelakos opened their set with the synthy bounce of “Little Secrets” from the 2012 record, sending a wave of smiles across the crowd. While Angelakos was a little confused about where he was, thanking Houston for some reason, fans didn’t care, as the band ended strong with “Carried Away”, “Take a Walk”, and “Sleepyhead” – perfect festival anthems. Across the field at the Water Stage, Grammy Award winner Zedd closed out Day One with a 90-minute-long raging dance party complete with blinding laser beams and bouncing floaties of all shapes and sizes. 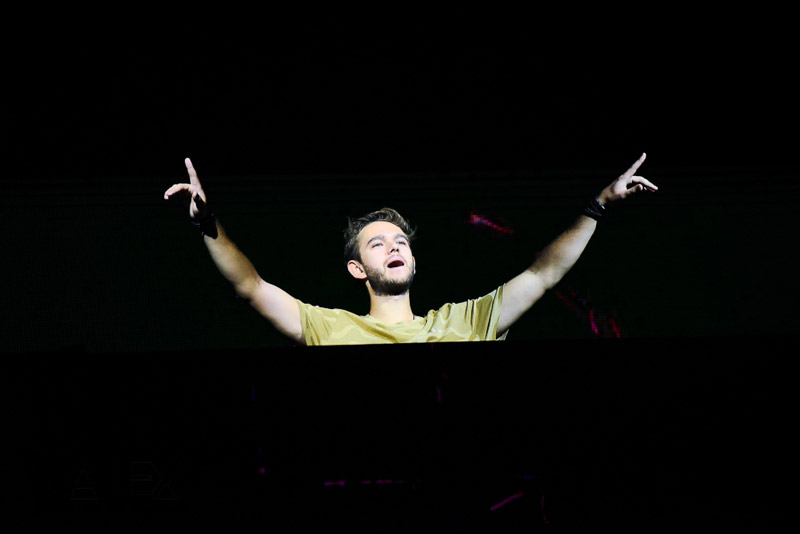 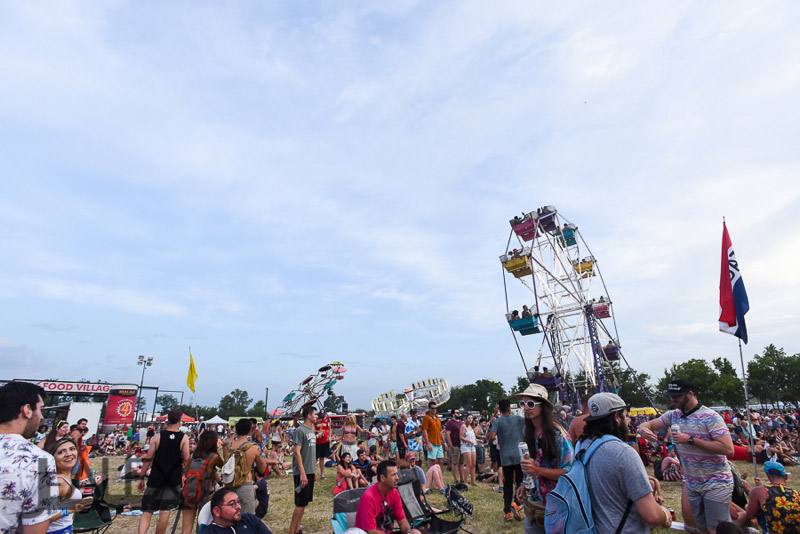 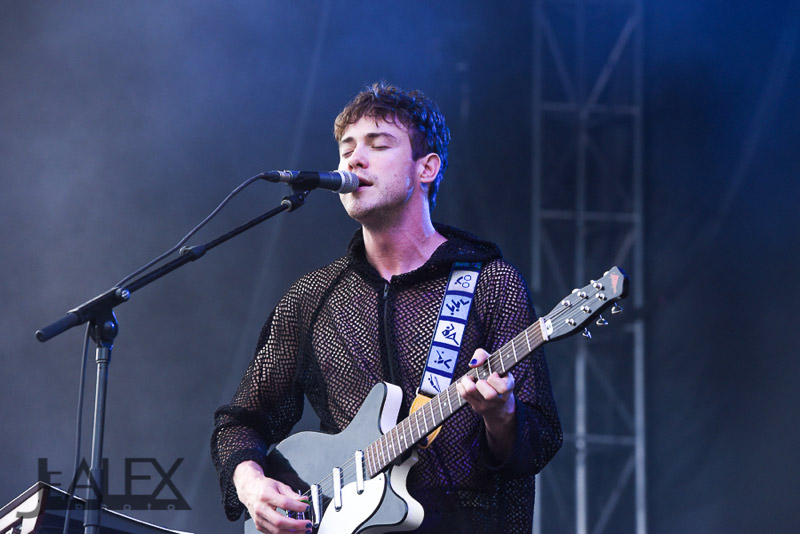 Sunburned and hungover, Day Two fans were slow moving. Given the choice of tubing days, Sunday seemed to be the most popular selection and tubing coordinators the Austin Facial Hair Club were prepared with over 9,000 tubes ready for butts. Texas acts once again ruled the early line-up as up-and-coming local band Los Coast baptized the crowd with their “psych-soul” gospel early on Sunday. Female fronted Austin artists rounded out much of the undercard with the punkier sounds of Ume, the indefatigable stage presence and smoky vocals of Sabrina Ellis-led Sweet Spirit, and folk pop of Wild Child. Bouncing from FYF Fest (QRO recap) to Float Fest in back to back days, MGMT’s dreamy electro pop took the crowd into magic hour with a thirteen-song set featuring over half their 2007 hit album Oracular Spectacular. 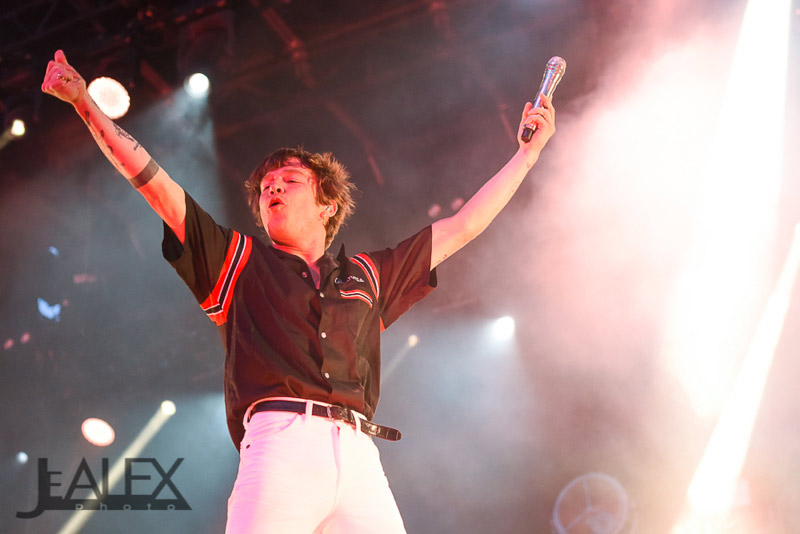 Headlining the final night were two rock bands that complemented each other rather nicely. Cage the Elephant has been on fire lately, ripping through early summer dates in Europe and building their fan base in Texas with performances at Tito Vodka’s 20th birthday party and Free Press Fest in April and May, respectively. The stage presence of lead man Matt Shultz is pure electricity as he runs back and forth across the stage doing jump kicks like a keyed-up Mick Jagger. Picking up the grey area between the White Stripes and the Black Keys left off, Cage’s jangly bourbon-soaked tunes were a welcomed change from a festival that leaned more on beats than on guitars – “Trouble” from their 2015’s Tell Me I’m Pretty, “Ain’t No Rest for the Wicked from 2009’s self-titled album, and “Shake Me Down” from 2011’s Thank You Happy Birthday being standouts in the 18 song set. 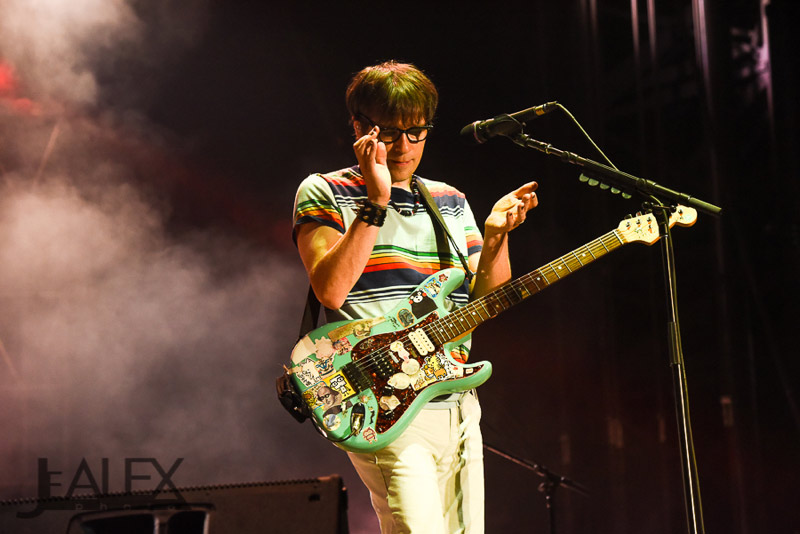 Returning to Texas after their SXSW performances (QRO photos), widely revered band Weezer showed how they bridge a rock arc that spans over twenty years. Ripping through hit after hit that had the crowd singing along to Rivers Cuomo’s anthems, Weezer nodded to the hip-hop vibes of the fest by performing a quirky cover of Outkast’s “Hey Ya!”. Towards the end of their set they invited Matt Shultz back on stage where he and Cuomo hip hipped to “Island in the Sun’ from 2010’s Green Album. Shultz stating that he couldn’t believe that he was on stage with one of his favorite bands of all time. The band closed out their encore with “Buddy Holly” as another wave of confetti showered the crowd as they hit the exits. As the fest moves into its fifth year in 2018, expect another rager that will beat away those summertime blues. 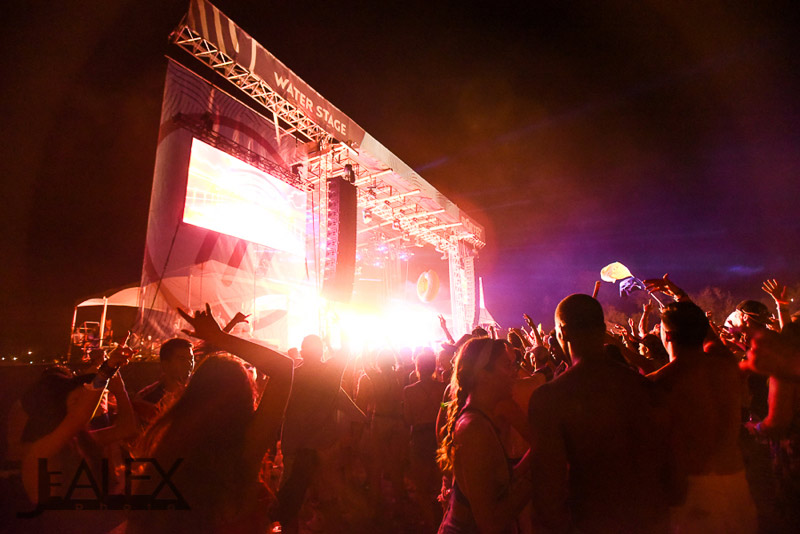