If Celtic-Irish style songs with fast punk overtones sound like fun, Flogging Molly is a band that exceeds those expectations.... 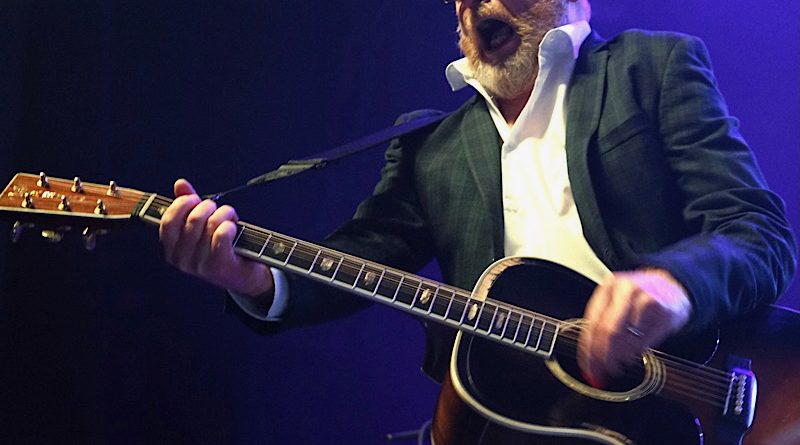 Click here for photos of Flogging Molly at 2015 Riot Fest in Chicago, IL in the QRO Concert Photo Gallery

Click here for photos of Flogging Molly at 2015 Shaky Knees Festival in Atlanta, GA in the QRO Concert Photo Gallery

Click here for photos of Flogging Molly at House of Blues in Boston, MA on February 26th, 2014 in the QRO Concert Photo Gallery

Click here for QRO’s review of Flogging Molly at The Midland in Kansas City, MO on December 14th, 2012

Click here for QRO’s review of Flogging Molly at The Pageant in St. Louis, MO on June 8th, 2012

Click here for photos of Flogging Molly at Hammerstein Ballroom in New York, NY on March 2nd, 2010 in the QRO Concert Photo Gallery

Click here for photos of Flogging Molly on Vans Warped Tour at Nassau Coliseum in Uniondale, NY on July 18th, 2009 in the QRO Concert Photo Gallery

Click here for photos of Flogging Molly at 2009 Rothbury Festival in Rothbury, MI in the QRO Concert Photo Gallery

The crowd was all cheers, and the band immediately upped the ante and delivered a triad of fast tunes to open the set: “Devil’s Dance Floor”, “The Hand of John L. Sullivan”, and “Drunken Lullabies”. The band was well spread out on Atlanta’s Roxy stage, and there were enough performer antics, singalongs, and musical surprises to keep the audience captivated throughout the set.

King had the first of many talks with the audience, saying he was happy to see parents bringing their children to the show, encouraging jokingly, “Make them deaf before they are 10.”

The pace shifted a bit during “The Worst Day Since Yesterday”. The crowd sang and shouted along, enamored by the band’s energy and presence. King put away his acoustic guitar to play a Bodhrán drum starting on “Black Friday Rule”, while Matt Hensley twisted his accordion’s bellows in unexpected ways. The band offered up a new song they are planning to record, “The Croppy Boy”. Unlike the Clancy Brothers’ classic, when the words “Two fried eggs” were heard, it was clear that this was a new, tantalizing song.

King mentioned playing with Social Distortion in the past, then started into the melodic song “Float”. Then, King introduced the violinist and tin flute player, his wife Bridget Regan. He also introduced the entire band, and another time later in the set.

Next, the band delivered a set of songs from the powerful Swagger album. The audience participation rose to an unexpected amount of enthusiasm. On the standing room only floor, the crowd was dancing, bouncing, and even a gentle mosh pit began. Some people were crowd surfing and passed over the front barrier. People upstairs were also standing.

Flogging Molly’s stage arrangement was smart. Right-handed electric guitarist Dennis Casey and left-handed bassist Nathen Maxwell flanked each side of each stage, and would regularly seek to energize their corner of the crowd. The other members had their own slots in between, moving up during solos or choruses while others moved back. This well-timed stage dynamic made for constant stage activity, and each member’s demeanor changed from gritty intensity to wide smiles. It was hard to tell who was having more fun with the show, the band or the audience.

More fun, energetic songs followed, including the timeless “Salty Dog”. After the mad burst of energy, King changed the tempo and offered a “song about friendship”, asking the crowd for a singalong to “If I Ever Leave This World Alive”.

Jumping and singing, bassist Maxwell cheered on the audience to sing and dance from his side of the stage.

Several times during the show King pointed out Irish flags in the audience. It seemed only appropriate that they would save “What’s Left of the Flag” until the end. The cloverleaf lights behind the band still glared at the audience as the band departed the stage.

Of course, the audience was not fazed by this. The cheering went on, and within no time, the band returned for one final number, “The Seven Deadly Sins”. As that song ended and the house lights came on, the final surprise was an exit song played over the house sound system, Monty Python’s “Always Look on the Bright Side of Life”. King sang along off-mic and greeted fans, as band members delegated guitar picks and setlists to fans up front, and all’s well that ends well. It was a well-rehearsed yet enthusiastic performance. Flogging Molly has had many good songs throughout their six albums. The set list was well chosen, and the song sequence sustained a great audience mood.