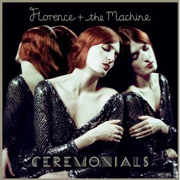 Two years ago, Florence & The Machine had one of the quickest breakouts of anyone this side of Rebecca Black, thanks to the phenom that was debut Lungs.  Singer/songwriter Florence Welch was launched to massive heights with her signature red locks (even though she’s a natural brunette…) and fashion sense, sort of an alt-Anglo-diva with orchestral backing.  Follow-up Ceremonials largely follows in the same vein, still an underused one, even if it can get to feel a bit standardized by The Machine.

Though the first Ceremonials single was the subdued-and-somber-into-bigger cry "What the Water Gave Me", it is second single/second track "Shake It Out" that sets the standard for the new album, as the evocative and powerful piece uses the group’s sonic size (in both vocals & instrumentation) to their advantage like a judo master.  However, nothing else on Ceremonials quite matches that, and after a steady diet of Flo, pieces like "Spectrum", "All This and Heaven Too", and third single "No Light, No Light" feel a bit Machine-pressed, relatively speaking.

There are still some changes in style on Ceremonials.  Welch goes more soul in her diva on "Lover to Lover", while The Machine brings some strong rhythmic drumming behind "Heartlines", and the record closes with processional-style Florence & The Machine, "Leave My Body".  But the group always walks a fine line in terms of emotionalism, as the sound can get bigger than the spirit behind it, veering into maudlin territory, which happens on "Never Let Me Go" and to some degree on the more tragic "Seven Devils" as well.

After the smash success of Lungs, Florence & The Machine didn’t really need to change their sound much from what worked, because it is still a rarer, grander, and more complicated style – it isn’t repeating something simplistic, like what The Strokes (QRO album review) did on their second album.  What’s more, it’s one that hasn’t been repeated all over the place, so if Ceremonials still sounds like Lungs, that’s really the only comparison one makes.  And even if they got big fast, their big sound still deserves it.