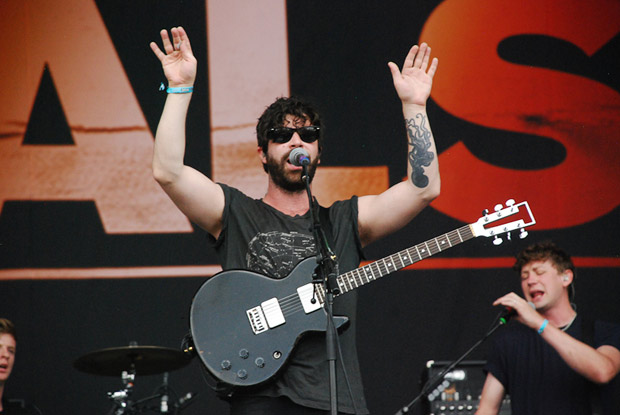 Click here for photos of Foals at Metro in Chicago, IL on April 26th, 2011

Click here for QRO’s review of Foals at Doug Fir Lounge in Portland, OR on October 21st, 2010

Click here for photos of Foals at Lincoln Hall in Chicago, IL on September 17th, 2010

Foals play an interesting brand of music.  Small repeated guitar figures and riffs form the heart of their sound while bouncing bass and precise drum work weave together to form an almost pointillistic version of dance rock.  At least that’s what they sounded like on their 2008 album Antidotes.  If the Oxford band’s June 5th show in Lawrence, Kansas at The Granada is any indication, something strange has happened to the intricate style that made waves in 2008.

When Foals took the stage on Wednesday night, everything seemed a bit off.  The giant “FOALS” banner that loomed over the opening acts seemed ominous and dark.  And ominous and dark is exactly how the show began.  Before the band emerged, an industrial beat and grinding synth crept from the stage.  But all this smoke and angst that filled the air can’t be seen as too much of a departure from the feel of Antidotes.  That album, although littered with bright, piercing hooks, is weighted with lyrics that don’t always make sense.  The seemingly Dadaist nature of the words contrasts with the clarity of the instrumentation and can often leave the listener without a sense of resolution.  But in Antidotes, that lack of resolution wasn’t a bad thing; it was another feather in the cap of Foals.  They were able to create a harmonious discord, and the unease that you felt matched with the haunting album artwork of a mouth filled with colorful pills.

In that way, the ominous darkness on it’s own was not an issue, as long as those piercing guitar figures could make their way through the haze.  But that’s not what happened.

No, those traits that made Foals stand apart from every other band, seemed conspicuously absent.  Maybe the crowd full of hats hiding grey hair and sporting Dave Matthews Band t-shirts should have been a giveaway, but Foals seems to have transformed into some dark, British, jam band.  They played mostly material from their new album, Holy Fire, and that material is a fairly large departure from Antidotes.  The band would evolve into long periods of lyric-less, formless, grumblings.  The bassist was cranked so loud that is muddled the entire sound.  The drums weren’t exacting; they were blasting.  Every member of the band seemed to lack restraint, making a bloated mess of even the songs they played form Antidotes.

Perhaps the work of Dave Sitek on Antidotes has been extremely underrated, as the man from TV On the Radio was not involved in the bands most recent efforts.  If this is the direction that Foals is headed, that is up to them to decide.  But if that’s the case, don’t go to a Foals show expecting to see much more than a Phish jam session.