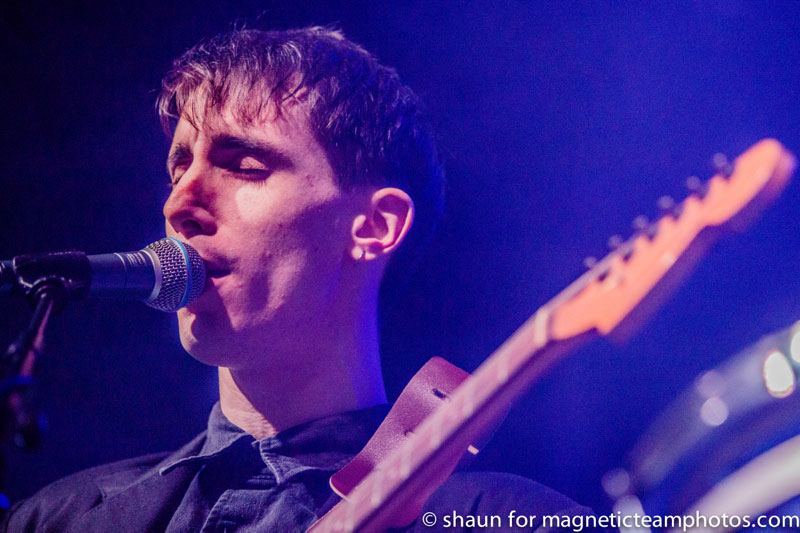 The first question that needs addressing is, are Foals turning into the ultimate Foals tribute band?  One year on, almost to the day after releasing their last album Holy Fire, the air of predictability hangs like a heavy fog.  On Sunday, 2nd February, at the Bijou East Village Arts Village Centre in Liverpool the band was yet again warming up for a United Kingdom arena tour, which is a warm up for the next American tour, which in itself is a prelude (couldn’t resist) to the lucrative European festival circuit.  In 2013 Foals played live almost every other day somewhere on the planet, almost surpassing the total gigs for the previous four years.  We can therefore predict with almost Zen-like foresight that they will open with “Prelude”; “Spanish Sahara” will yet again be the focal point and “Inhaler” and “My Number” will be played to a frantic audience response, culminating at some point with Yannis Philippakis ending up in the crowd.

The next question is, are they using the R.E.M. blue print?  Where the Georgia quartet created a massively successful album that was Automatic For the People, which they toured incessantly until eventually each subsequent show became a homogenous series of events.  After that behemoth R.E.M. had little choice but to try and artistically re-invent themselves, leading to the creation of the pseudo grunge of Monster and the dire single release of “What’s the Frequency Kenneth?”.

Earlier in the evening Liverpool’s latest bright young thing’s Outfit had played a stunning hometown set.  All the aggression and sharpness that had been witnessed less than a week earlier at the Bodega in Nottingham (QRO live review) was smoothed into a pure electro pop veneer.  Highlights again were “I Want What’s Best” and “Elephant Days”, both of which contained echoes of Fiction Factory and another Liverpool band, China Crisis, with their polished sound being equally matched by their co-ordinated inky black stage attire.

Foals entered the now tropical atmosphere and the inevitable “Prelude” stirred the already salivating crowd into near hysteria.  Predictions rang true apart from the deep and dark rumble of “Late Night”, with its claustrophobic intensity causing it to occupy a musical vortex all of its own.  Yannis leaped into the crowd still strumming his guitar as they closed with “Inhaler”, returning for an encore that consisted of the angular Bloc Party-sounding “Hummer” and “Two Steps, Twice”.

Foals have chosen the road in preference to the studio for the foreseeable future; whether this is the correct choice only time will tell, the risk being that they are forsaking their unquestionable talent and instead suffocating in their rarefied atmosphere of predictability.