<img src="http://www.qromag.com/wp-content/uploads/2010/10/foalsoct22.jpg" alt=" " />A sold out show, a billowing of fans swelling towards the empty stage, and an expectant pause for the headlining band... ... 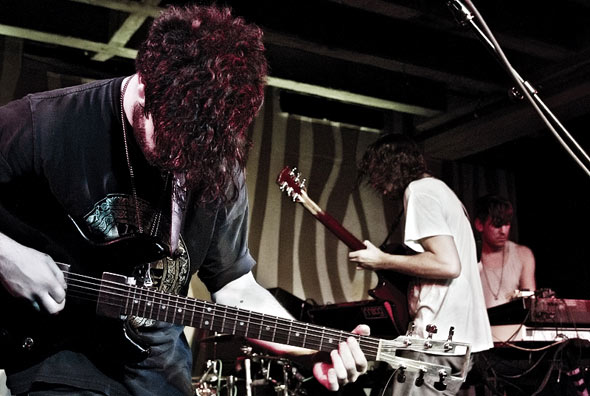 Click here for photos of Foals at 2013 Governors Ball in New York, NY in the QRO Concert Photo Gallery

Click here for photos of Foals at Terminal 5 in New York, NY on May 4th, 2011 in the QRO Concert Photo Gallery

Click here for photos of Foals at Metro in Chicago, IL on April 26th, 2011 in the QRO Concert Photo Gallery

Click here for photos of Foals at Lincoln Hall in Chicago, IL on September 17th, 2010 in the QRO Concert Photo Gallery

October 21st, Doug Fir Lounge, Portland, OR: A sold out show, a billowing of fans swelling towards the empty stage, and an expectant pause for the headlining band…

The members of Foals took the stage with unassuming presence.  The green and pink lights against the sylvan inspired wall seemed an awkward fit but falls out of sight with the opening lines of “Blue Blood”.  It was a powerful start to a mixed show. 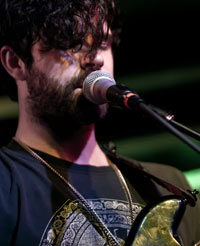 The room was riled up in the first wave of favorites, clapping along to Total Life Forever (QRO review), some dancing, others pseudo-moshing (politely excusing themselves for bumping into others).  The band kept their intensity throughout the set, although the crowd lost theirs (save the diehard fans in the front).  Like the alchemistic album, the show had several odd elements that at times fastened the attention of the multifarious audience, but could not sustain it. 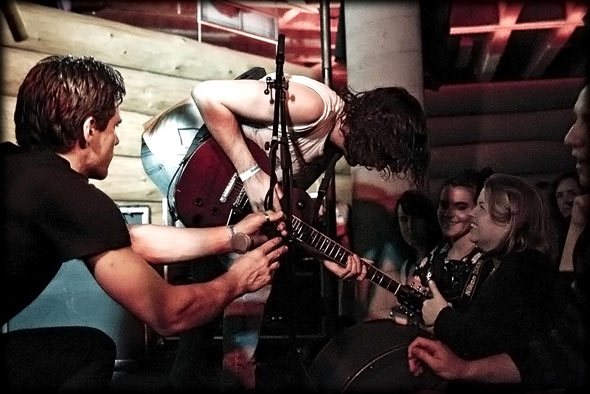 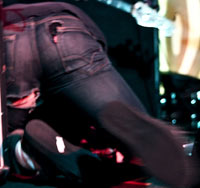 There were teases of reeling you in.  The frontman, Yannis Philippakis, jumped into the crowd a couple of times, teeming with energy.  The crowd, however, seemed to swallow him up, and he re-emerged quietly and markedly subdued.  He exploded into a fit of punk rock rebellion during “After Glow”, but turned his back on the audience and bumped into the speakers losing his train of enthusiasm.  And not until the encore did he visit stage right where he sprung atop an amp as if to rock out, but as quickly as he rose he left the sidestage to join his band.

Where there was seemingly room for three musicians upfront, only Yannis and his guitarist, Jimmy Smith, stood flush to the crowd.  The bassist, Walter Gervers, appeared to be hiding in the back.  There were 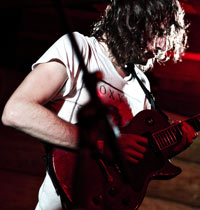 opportunities to address the crowd, to invite them in, but only one real attempt was made about Yannis’ ragged shoe and it was sadly inaudible.

They were not pretentious.  They were about the music.  If you love their albums, you’ll love their shows.  They were solid musicians with a musically flawless set.  Their dedication to each song did not waver.  Some songs, like “Balloons” and “Spanish Sahara”, effortlessly enveloped the audience.  For a modest band, they brought a big sound.  It is a band on the brink – definitely worth following awhile to see what direction they take.  Doug Fir was a discordant environment for them.  Sometimes their music transcended that and connected with the crowd.  Other times it did not.  For this show, they departed one step, two step, as quietly as they arrived. 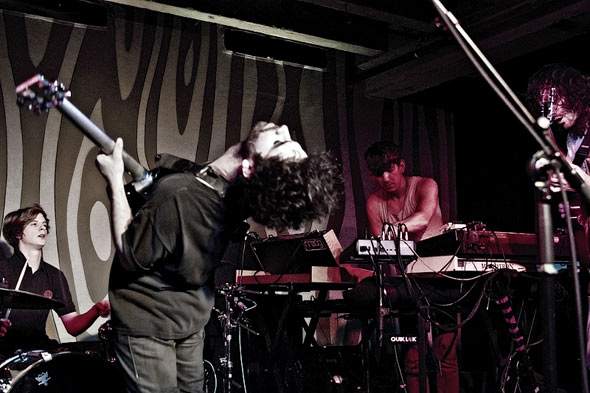