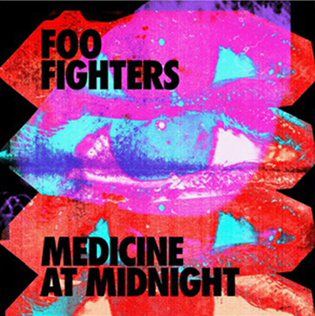 After experimenting on 2017’s Concrete and Gold (QRO review), Dave Grohl and his Foo Fighters reportedly wanted to party for their next release, scheduled to match the twenty-fifth anniversary of his post-Nirvana band. Then COVID hit, and the album was delayed along with everything else, finally coming out this year. Supposedly their Let’s Dance, Medicine At Midnight is another not-that-inventive Foo Fighters reinvention.

Give credit to Grohl for loving his inspirations, for loving rock even in these days of its seeming decline, even if he can never match his forebears. Medicine is littered with decent-to-good songs that might be fun when they next play a stadium, but are hardly revelatory. “Waiting On a War” does nicely shift from heartfelt into faster rock, and closer “Love Dies Young” is better Foo Fighters up-rock. But then there’s the would-be-funk-rock of “Shame Shame” and “Cloudspotter”, and the middling distinct Let’s Dance attempt title track (Be inspired by David Bowie? Definitely yes. Try to do Bowie? No).

While the world needs live music again, and probably Foo Fighters are one of the rock bands the world (or at least the richer English-speaking parts) needs, it does not need Medicine At Midnight. But it is good that Foo Fighters are still here, still fighting for rock.