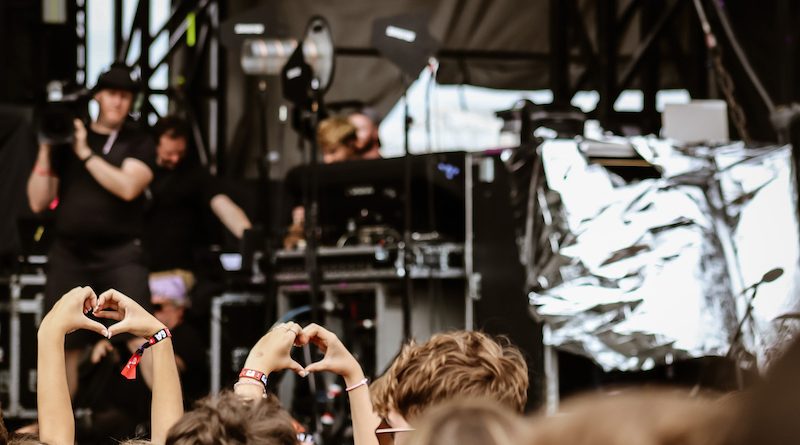 Friday kicked off with performances from amazing artists such as Charlotte Sands and The Homies. Blue-haired, 25-year-old Charlotte Sands started the day on the Mast Stage, with performances of hits such as “Every Guy Ever”, “Dress”, and her recent release, “Out Of My Head”. After touring with The Maine and YUNGBLUD in the past year, Sands has definitely grown her audience incredibly, and will undoubtedly continue to. Many people in the crowd said that they had not heard of Sands until that day, but they left her set being a fan. Her stage presence was truly amazing and definitely made an impression on everyone in attendance.

Louisville’s own The Homies began the day on the Ocean Stage. The Homies are a rap/hip hop group consisting of five members: Ace Pro, Quiiso, Shloob, 2forwOyNE, and Ronnie Lucciano. They took to the stage in coordinated orange outfits, with the Instagram caption of the day saying, “Orange you glad you saw The Homies!”. They performed hits such as “Leaf Wraps”, “White Lies”, and ended with recent release, “Shake”.

Nashville-based alt/pop band COIN started at 6:45 to a sea of dedicated fans, who had waited at the Boom Stage all day just to see them. Fresh off of a UK/European tour with 5 Seconds of Summer and the release of their fifth album, Uncanny Valley, COIN has had a busy past few months, but that did not stop them from putting on an amazing performance. Their stage set-up was complete with grass and a giant inflatable ladybug, going hand-in-hand with the Uncanny Valley visuals and aesthetics.Opening with a tape of the first song from Uncanny Valley, “Learning”, and then entering straight into their hit “Chapstick”, it was obvious from the second that frontman Chase Lawrence took the stage, this was going to be an amazing set.

Even though they only had about an hour worth of a time slot to play, COIN did not waste any time and had fans screaming every lyric throughout their entire set. While they played newer songs such as “Brad Pitt” and “Take A Picture”, the band made sure not to forget about the fans who love their older music as well, throwing in fan-favorites “Growing Pains” and “Malibu 1992”. There was a fan in the first few rows of the crowd who had made a sign asking the band to play “Never Change”, a song from their 2020 album, Dreamland. Towards the end of their set, lead singer Chase Lawrence sang a few lines of “Never Change” at the end of “You Are The Traffic”, just for this fan, resulting in them crying and feeling beyond special. Ending with a cover of Outkast’s “Hey Ya!” and their hit “Talk Too Much”, COIN’s set was nothing short of fun. Lawrence even ran through the barricades separating the crowd and stood on multiple parts of the barricade, singing “Talk Too Much” with the crowd.

Up next was 23-year-old Clairo, who took to the Mast Stage to perform her indie/alternative songs in the pouring down rain. The rain did not stop fans from showing up for Clairo though, as the grounds at Waterfront Park were completely packed for Clairo’s set, despite 80% of the crowd being in ponchos. Clairo herself eventually even needed a poncho, which she got from someone in the first few rows of the crowd. Her performance was completely beautiful, as her voice resonated throughout the sky, touching everyone in attendance. She played hit songs such as “Bags”, “Sofia”, and “Bambi”.

Soon enough, it was time for the most anticipated set of the day, hometown hero Jack Harlow. As the time neared 9:45, the crowd got more and more excited. Once the music finally started, screams erupted from all over Waterfront Park. Everyone heard Harlow’s voice, but he wasn’t on stage, and no one knew where he was. As fans searched frantically for a few seconds, gasps quickly erupted as they realized that he was quite literally on top of the Forecastle Mast Stage, a couple hundred feet in the air. Everyone began to pull out their phones to record, as Harlow sang “Talk Of The Town” on top of the main stage. After that song ended, he moved down to the actual stage and went straight into newly released hits, “Dua Lipa” and “Young Harleezy”.

Harlow played almost every song off of his recently released album, Come Home The Kids Miss You, and expressed his gratitude towards the audience for already knowing most of the words, just three weeks since the album had come out. Before performing “I’d Do Anything To Make You Smile”, Harlow explained how he imagined playing this song at festivals when writing it, then proceeded to ask the crowd to jump with him. It felt like the entire state of Kentucky was at the Forecastle Mast Stage that night, it was insane.

As someone who has grown up in Louisville and lives a mere 20 minutes from Atherton High School, where Harlow went, it has been crazy to watch his massive rise to fame. But there is one thing about Harlow, he has not forgotten where he came from. He came out on the stage wearing a Louisville basketball jersey along with a massive silver chain that had the shape of the state of Kentucky hanging from it. While he played a lot of songs from his new album, Harlow made sure not to forget older hits such as “WARSAW” and “THRU THE NIGHT”, which the Day One crowd absolutely loved.

There were tons of fans who flew in from other states just to see Harlow perform in Louisville. Many fans even lined up at Forecastle gates on Thursday night and slept on the streets just to get a front row barricade spot for Harlow’s set. As the night came to an end, he played some of his biggest hits, such as “Nail Tech”, “INDUSTRY BABY”, and “WHATS POPPIN”. Harlow expressed his gratitude for the fans many, many times, and even explained how crazy it was to him that he was headlining Forecastle, as he used to sneak into the festival just a few years back.

Right before saying goodbye, Harlow asked the crowd if they wanted to hear the #1 song in the nation, which caused a sea of screams to erupt as he began “First Class”. Red fireworks graced the sky towards the end of the song, creating a truly magical moment on Waterfront Park, as Harlow encouraged the crowd to never give up on their dreams, and reminded them that anything is possible.