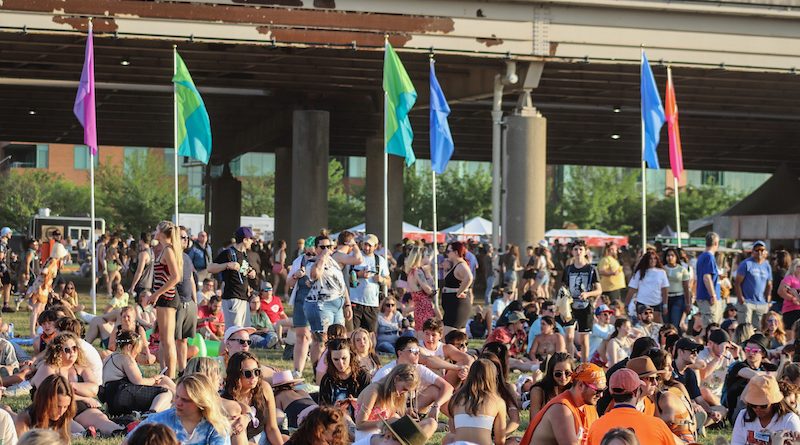 Saturday kicked off with the amazing Chelsea Cutler, who brought all kinds of energy to the Mast Stage. Her set was a mix of happy, dance-worthy songs, and pieces that made you want to cry – both sad and happy tears. She played hits such as “Sad Tonight”, along with “you were good to me” and “this is how you fall in love”. Everyone was feeling the love during Cutler’s set. She even joked about how she had learned how to properly pronounce “Louisville” just for this festival, and she was one of the few artists who actually pronounced it correctly all weekend.

Up next was Quinn XCII, who brought a set to the Mast Stage that the audience absolutely loved. He had everyone jumping around with their hands in the air. He played songs such as “Coffee”, “Stacy”, and “Love Me Less”. About halfway through his set, he even brought his friend Chelsea Cutler back out on stage, and they performed a few songs together, such as their hit “Stay Next To Me”.

Crowds started to gather at the Mast Stage again as it neared 7:45. Right as it hit 7:45, the wonderful Phoebe Bridgers came on with her hit “Motion Sickness”. She played as the sun set over the Ohio River, creating a beautiful scene for Bridgers to perform her breathtaking songs for a crowd that sang almost every word back to her. She was very interactive with the crowd between songs, and even congratulated fans who held up a sign saying, “We Graduated Today!” She explained how she did not graduate high school, and barely got by with a 1.5 GPA, so she was extra proud of them for graduating.

Between hits such as “Kyoto”, “Punisher”, and “Scott Street”, Bridgers even brought her dog on stage, a black pug named Maxine. She pet the dog for a few minutes while explaining that it was her dog watcher’s birthday, and asked the crowd to wish her a happy birthday. About halfway through her set, she paused the music to give a speech on a topic that means a lot to her. “I had an abortion last year,” stated Bridgers, “Because I wanted to.” She proceeded to explain how she took this for granted at the time and that everyone should have this sort of access and freedom. She then listed off some good foundations to donate to, such as Mariposa Fund, The Lilith Fund, and Planned Parenthood.

Before starting “Chinese Satellite”, Bridgers explained how she wrote the song about walking through “really gross picket signs” before she had to do it herself. “I just walked by that happening and it really grossed me out, so I wrote a song about it”, stated Bridgers. She went on with other hit songs such as “Graceland Too”, ”ICU”, and recent release, “Sidelines”. As the end of her set neared, she began playing the opening notes to “I Know The End”, as a fire appeared on the screen behind her with a small sigh stating “The End Is Near”. This was truly an amazing ending to her set, as it ended with Bridgers and the entire crowd screaming at the top of their lungs in a very cathartic moment. Watching her perform during the sunset hour was truly breathtaking. She brought such an ethereal feeling to Waterfront Park and it was quite magical.

Soon enough it was time for Saturday’s main headliner, Tame Impala. People crowded towards the stage as the time neared 9:45. A sea of screams erupted when the lights on the stage finally went down and a video appeared on the screen. This video was advertising Tame Impala’s made-up drug, Rushium. According to the introductory video, this drug has the power to mark and alter time perception. As the video started to get drawn out to show time slowing down, it eventually faded to black as the band entered the stage and began playing “One More Year”. Tame Impala had the crowd dancing, jumping, and completely just vibing out all night long. As they played hits such as “Borderline”, “Breathe Deeper”, and “Elephant”, the audience loved every second of it.

Tame Impala’s production/light show is simply one of the best out there right now. It was completely beautiful and breathtaking. There were so many different colored lasers shining all throughout the crowd all night and all kinds of colored lights flashed across the stage throughout their entire performance. There was simply never a dull moment. The band even had confetti about halfway through their set, which was so beautiful as it mixed with the lasers and colored lights. Everyone was reaching to the sky trying to grab a singular piece of confetti to keep with them as a souvenir for this amazing night. During their last song, “New Person, Same Old Mistakes”, there was more confetti, not just once, but twice! The confetti and lights created such a beautiful scene on Louisville’s Waterfront. Everyone left Tame Impala’s set joyful, amazed, and covered in confetti. Once their set ended, one of the stage hands even brought out a blower and blew out wrapped up setlists to waiting fans, who were all ecstatic to catch one! Overall, Saturday was a magical day in Louisville.

Belle & Sebastian – A Bit of Previous