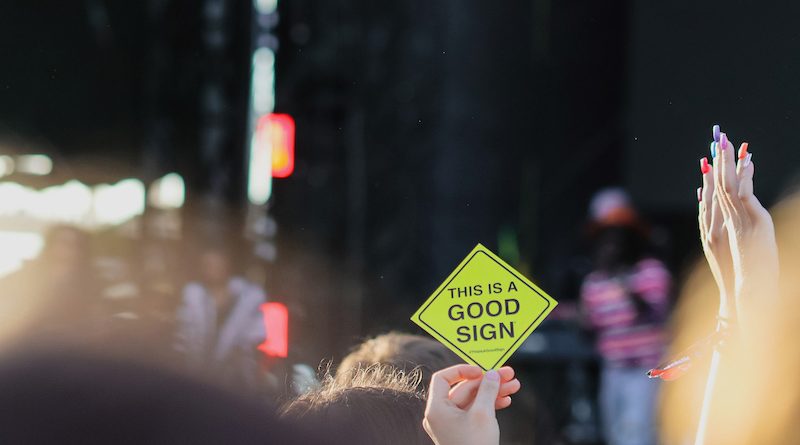 On Sunday, the final day of Forecastle 2022, was KennyHoopla at the Boom Stage. It is pretty safe to say that KennyHoopla’s energy is simply unmatched. After running out on stage after the crowd started changing “Kenny” over and over, once KennyHoopla got started, there was nothing stopping him. The crowd was loving every second of his set, as he played songs such as “smoke break//”, “hollywood sucks//”, and “DIRTY WHITE VANS//”. Almost everyone in the crowd for his set was jumping up and down to every song, and fans even started a mosh pit, which Kenny hopped off the stage and climbed into the crowd to join in while he sang.

Shortly after finishing up moshing with the crowd, he began crowd surfing, which the fans loved. Kenny put on such a high energy set, on the hottest day of Forecastle at that. Even with temperatures in the 80’s and the sun blaring down in Louisville, this did not stop Kenny or his fans from giving it their all. During his last song, “estella//”, Kenny even ran down the barricades separating the crowds, touching hands with as many fans as possible before ending his set. Definitely one of the highest energy sets of the weekend!

Up next was 28 year old pop singer, FLETCHER. Many dedicated fans had gone straight to the Boom Stage once gates opened on Sunday just to wait to be close for FLETCHER’s set. Some had even flown in from other states just to see her play! The singer ran onto stage and opened her set with her hit song “girls girls girls”, right before the start of pride month. FLETCHER’s energy was so high and every song was just so dance-worthy, she had the crowd dancing and singing during her entire set. She went on to play other hits such as “Cherry”, “Forever”, and “If You’re Gonna Lie” before getting into her breakout hit, “Undrunk”. Throughout almost the entire set, FLETCHER was smiling ear to ear. It was so easy to see that she was made to do this, and she loves every second of it.

Towards the end of her performance, before going into “Healing”, FLETCHER actually revealed that she used to have really bad performance anxiety and fear of performing on stages in front of big crowds of people, which was very shocking since she makes it look so easy now. Before beginning “Healing”, she proceeded to explain that being able to perform in front of an audience again has helped her heal tremendously. She ended with her hit “Bitter”, which had everyone singing and jumping, and she even ran down the barricades separating the crowds, touching hands with fans. FLETCHER’s set was beautiful and so dance-worthy, definitely another one of my favorites from the weekend. After her set, she even went out into the crowd and met a bunch of fans, taking the time to speak with and listen to each and every one of them.

Dayglow took to the Boom Stage next, walking out onto the stage as a message appeared on the screen behind them, stating, “Dayglow is playing live music right now”. Fans packed as the band began their set with hits such as “Medicine” and “Something”. Frontman Sloan Struble had so much energy and it resonated throughout the crowd, creating a set where everyone was dancing, singing, and jumping during almost every song. Fans were especially excited during hits such as “Hot Rod” and “Can I Call You Tonight?” There was so much energy at the Boom Stage during Dayglow’s set that a llama piñata even made an appearance, travelling throughout the crowd as the band played.

Meanwhile, Black Pumas on the Mast Stage were very down to earth and personable. Lead singer Eric Burton had the crowd clapping numerous times and even performed while walking down the barricades that separated the crowd, grabbing hands of fans and singing to them personally. Black Pumas’ set was a beautiful sight to see, as they were playing beautiful hits such as “Next To You”, “Fire”, and their smash hit “Colors” right as the sun was setting over the Ohio River.

And just like that, it was time for the final headliner and performance of Forecastle 2022, Tyler, The Creator. A beautiful firework display took place over Louisville just before Tyler took to the stage, putting a lovely bow on the weekend as it wrapped up in Louisville. Many fans had camped out at the Mast Stage for 12+ hours on Sunday just to be up close for Tyler’s set, so they were nothing short of ecstatic once his set finally began.

Tyler Okonma, better known by stage-name Tyler, The Creator, took to Forecastle’s Mast Stage right around 9:45pm. He slowly entered the faux-grass hill covered stage wearing a coat, sunglasses, hiking backpack, and using a cane. The crowd went crazy as he got to the top of the hill and began taking off his “hiking gear” and started performing his smash hit “CORSO”. Tyler’s energy was insane once he entered the stage, but his and the crowd’s energies only went up from there. After “CORSO”, he went straight into other hits such as “LEMONHEAD” and “WUSYANAME”, which the crowd went crazy for. He had everyone jumping and singing every word back to him.

After the first few songs, Tyler admitted that he was slightly worried about tonight and wasn’t sure how it would go, not because he didn’t know what he was doing, he explained that he knew he would put on a good show, he just wasn’t sure if anyone would like it or know the words since he had never performed in Louisville before. He continued to explain that the crowd had quickly proven to him that he did not need to worry, as they knew almost every word to every song. Sparks and pyro graced the stage throughout a good portion of Tyler’s set, creating an even better energy for the set. His dance moves and extremely high energy definitely did not go unnoticed, Tyler put on a heck of a performance. His visuals were also amazing, he is a very good performer and storyteller. He played many hits from his most recent release, CALL ME IF YOU GET LOST, but he also threw it back and played some older songs from his 2017 album, Flower Boy, such as “See You Again”, “Who Dat Boy”, and “911”. As the night came to a close, he played more recent hits such as “EARFQUAKE” and “NEW MAGIC WAND” before ending with “RUNITUP”, which had everyone in the crowd jumping and singing.