<img src="http://www.qromag.com/wp-content/uploads/2009/07/foreignbornperson.jpg" alt=" " />Alt-folk/rock actually delivers when L.A.'s Foreign Born take a turn in that direction on their sophomore LP. ... 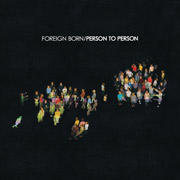 These days, there’s really too much alt-folk/rock out there, from anyone who can pick up a guitar and sing sad, stripped songs, to anyone with a beard and a little weed who thinks they can go freak-folk.  So when the young, more mainstream alt-rock act Foreign Born – best known for performing on the series premiere of NBC’s Chuck – signed to Secretly Canadian (part of the same northern family of labels as Jagjaguwar & Dead Oceans) and went folk-rock in their sophomore LP, Person To Person, you had every reason to foresee another unneeded addition.  But the L.A. act is an underrated ensemble, and Person breaks the alt-folk/rock box by actually rocking when it wants to, and emoting when it wants to.

Right from the get-go with opener “Blood Oranges”, Person lets the listener know that this isn’t the alt-rock of Foreign Born’s (actually pretty good) debut, On the Wing Now (QRO review).  The swaying, grand folk-rock of “Oranges” isn’t remarkable in itself, but the piece introduces the high additional guitar work that is Person’s signature best.  Everything about “Oranges” is improved on the following “That Old Sun”, and from there Foreign Born go from strong track to strong track for much of Person: “Winter Games” brings an electric, seventies stomp, while “Early Warnings” adds press, and “Can’t Keep Time” goes more indie-pop.  Meanwhile, the sad side of Person comes out in the loss-leaden “Vacationing People” and “Lion’s Share”.

Click here for photos of Foreign Born at Music Hall in Williamsburg in Brooklyn, NY on February 28th, 2008 in the QRO Concert Photo Gallery

Click here for photos of Foreign Born at CMJ 2007 in New York, NY in the QRO Concert Photo Gallery

The grand “Share” is the seventh song on Person, and one can’t help but wish it were the closer – and not just because it fills that role well.  The following three tracks, “It Grew On You”, “See Us Home”, and “Wait In This Chair” all really slide from the excellent first 70% of Person.  Not terrible, but the procession of “Grew” is dull in comparison, the swing of “Home” is a bit too much of a torch song, and the sad loss of “Wait” is just a pale copy of “Vacationing” and “Share”.

L.A.’s always been something of the anti-thesis to both alt & folk, with its sunny climes, beautiful people, and sometimes superficial nature, so a band from the City of Angels going for alt-folk/rock would always be a risk, doubly in this day & age of alt-folk-over-saturation.  But Foreign Born deliver on Person To Person when they don’t listen to trends or the like, but just do whatever it is that they want to do.