<img src="http://www.qromag.com/wp-content/uploads/2011/08/fosterthepeopletorches.jpg" alt="Foster the People : Torches" />It is easy to see that Foster the People desire to be the next big act to come from Los Angeles,... 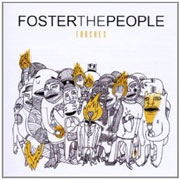 Hailing from the musically saturated region of Los Angeles can make it is easy to get lost in a mix of sometimes-good yet often-forgettable music.  Even though Foster the People have broken into the indie/alternative scene in a big way this year, their debut album Torches feels just like that, lost in the mix.  They are known mostly for their over-played radio single “Pumped Up Kicks” which can be recognized by its whistling hook reminiscent of Peter Bjorn and John’s (QRO spotlight on) “Young Folks”.  When a group like this comes along first impressions are key as there isn’t any previous work to compare to.  Bands in their position are tasked with the importance of leaving listeners wanting more.

In terms of sound, at times Torches accomplishes said task, but just barely.  Songs like “Helena Beat” and “Call It What You Want,” have catchy enough beats to make them a redeeming quality of Torches overall.  Lead vocalist and namesake, Mark Foster, offers interesting vocal stylings throughout and could even be mistaken for Maroon 5’s Adam Levine on songs like “I Would Do Anything For You” and “Houdini”.  However, his falsetto vocal sound is so plentiful it possesses the ability to grate by the album’s end.

Click here for photos of Foster the People at 2011 POPPED! Festival in Philadelphia, PA in the QRO Concert Photo Gallery

Click here for photos of Foster the People at SXSW 2011 in Austin, TX in the QRO Concert Photo Gallery

Clocking in at just over thirty-eight minutes, the album feels quite brief.  As a result, its closing track “Warrant” arrives sooner than expected but is a fitting climax.  It is ultimately one of Torches‘ highlight moments due to its infectious melody and overall atmospheric feel.

Torches has fun and engaging sections while at the same time proves to be a bit underwhelming.  It makes a sometimes fun and sexy impression but is equal parts uninspiring and bland.

It is easy to see that Foster the People desire to be the next big act to come from Los Angeles, and what they have produced with Torches is something slightly more than average.  However, only time and more albums will tell if they have something to offer that is long lasting.  Based on their debut, things have the potential to progress either way.