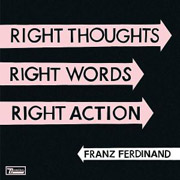 Since breaking through almost a decade ago with “Take Me Out”, Glasgow’s Franz Ferdinand have been effectively repeating their angular indie-dance to lesser, but still enjoyable, effect.  That continues, for the most part, with Right Thoughts, Right Words, Right Action.

The band’s first record since 2009’s Tonight: Franz Ferdinand (QRO review), like Tonight and all the rest of their albums, one can tell immediately upon listening that this is a Franz Ferdinand record.  The pseudo-title track/opener/first single “Right Action” is certainly a welcome return to the dance floor.  However, from there on Right Thoughts feels a little run-of-the-mill Franz Ferdinand, such as in the following tracks & singles, “Evil Eye” and “Love Illumination”.  Even in the energetic “Bullet”, one can virtually hear the title chorus to “Cheating On You” from their self-titled debut.

Click here for QRO’s review of Franz Ferdinand at Roseland Ballroom in New York, NY on May 7th, 2009

But things do change up in the final three pieces on Right Action.  “The Universe Expanded” sees the band go quieter and darker, reaching into haunting.  While you wouldn’t want “The Universe” to expand to a whole record, it’s a solid change from the otherwise unchanging band.  But then right after it is another darker & quieter song, “Brief Encounters”, followed by sad goodbye “Goodbye Lovers & Friends”.  While “Goodbye” should clearly be the closer & “Right Action” the opener, the album would have been better served had the rest of the songs been mixed up more in their order.

It’s difficult to complain that Franz Ferdinand don’t change – and unfair, as one doesn’t really want them to change.  Even if they’re never going to be able to do “Take Me Out” again, they’re still an enjoyable band with enjoyable songs – and are beginning to try to be something more.

God Is an Astronaut – Live