It was no cosmic accident that Franz Ferdinand scored the heart of Atlanta’s rock church, The Tabernacle, the same week as the peak of the Perseids.... 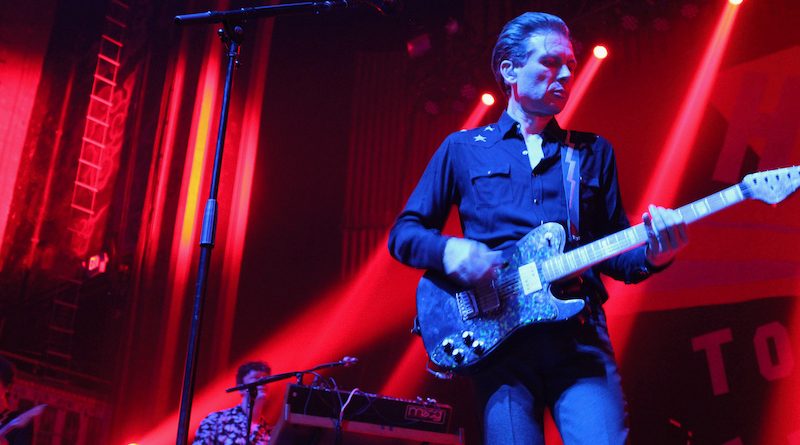 It was no cosmic accident that Franz Ferdinand scored the heart of Atlanta’s rock church, The Tabernacle, on Monday, August 8th, the same week as the peak of the Perseids. The shooting-star Scots brought their volupté-everyday cabaret and presented it to a fanatically waiting ATL like a thrown knife. In town to present their latest album, Hits To The Head, a waterglass greatest hits collection so full of gleam as to naturally sidestep any need for light-bending cosmetics, Franz Ferdinand hauled out all the halest horses of their harmonic glory days both past and present, and each one was worthy of an Hermes harness.

Get out to see the opener on this tour if you can. Supported by Boston’s Vundabar in Atlanta, Franz Ferdinand have chosen a distal trio of post-punk poets positively radiating those dramas of nymphs and satyrs, those somethings and wisdoms that so defined their own emergence back in 2004. Vundabar’s subterranean curiosity shop is carved out by bassist Grayson Kirtland, drummer Drew McDonald, and the Corgan-adjacent howls and guitar of Brandon Hagen, who bears the seismic artistic presence of Cillian Murphy cocktailed with Butch Walker. Vundabar unquestionably live up to the bold bulletin of their name and you will not be sorry when their purring wings beat you about the face.

Click here for photos of Franz Ferdinand at 2022 Just Like Heaven in Pasadena, CA in the QRO Concert Photo Gallery

More eloquently than any of their contemporaries in that last, glorious wave of aughts rock, Franz Ferdinand themselves have always made intensely sexy art that illuminated the stark difference between beauty-hunger and skirt-fever. For all their sculpted vogue, there has not been even so much as one observably feckless factor in Franz. Alex Kapranos is a frontman set to his own hedonic calculus. A slinky sparkle-hound who uses his Zephyrean baritone voice with the skilled precision of a wire-lather, his are the sounds of a complex gender–so unconfiding as it benignly and beguilingly tells you everything.

If it were not perfectly obvious prior to Late Night Tales: Franz Ferdinand, the 2014 compilation album wherein Kapranos and Krew imaginatively and compellingly cover everything from Lee “Scratch” Perry to Paul McCartney, it certainly should have been afterward: these ultramodern eaglets from the dear green place do warrior pirouettes with genre and expectation – and therein lies the mark of merit. Not since “We Could Send Letters” by The Aztec Camera had so much Scottish shy-swagger been spotlighted on the Big Smoke stages of the world.

Often misunderstood and mislabeled by misguided critics, Franz Ferdinand since have conducted a 20-year music career in a beautiful breakaway republic of their own delineation and seemingly with the famous ethos of Carter Bays ever close at hand as a guiding principle: “I am an omnivorous fan of creativity.” The very elements of change and experimentation that would often have the crusted brothel creepers of the music press harping about ‘unrealized potential’ are that very real (and still full of velocity and momentum!) potential being artfully realized. Not to worry, Franz friends. Surely you Scottish supremos know by now that the arrowhead of the pen, when poorly aimed and dully sharpened, is generally only ever so nubby out of jerry-built jealousy and all that class of carry-on. Let them just “feel the envy”. Wink, and wink.

If your ears are new to Franz Ferdinand’s duvetyne district of Glaswegian growl, please meet the band. Bassist Bob Hardy has never placed himself among rock’s wildcatters and hell-raisers but rather remains one of its premier conveyors of congeniality. Dino Bardot telegraphs a cobalt danger in every understated, perfectly executed measure of guitar break. Julian Corrie is the liquid nitrogen here – so many explosive and energy-exuding uses for the multi-instrumentalist techno-signature he deftly scrawls across every Franz feat. Lastly, the pink agave and wasabi mousse of this bunch is undeniably the backbeat-babe that is Audrey Tait, having formally taken over drumming duties from Paul Thompson, who amiably retired in the latter part of last year. Her stand-up drum solo at this Atlanta show hit like Benny Lynch and sounded like someone practicing rhythmic riflery. Impressive and monumentally inspiring is all.

All told, the Atlanta stop on the Hits to the Head tour unfurled like a suspense thriller set at a wedding – mad visions, foxy hours, hybrid states. A collective celebration of Franz Ferdinand’s music means a night spilling with songs brimming in oncoming longing and the kind of apocalyptic revelations that occur even in the quietest life and can never be completely expressed to another. ATLien Franz fans were treated to all manner of bituminous tidbits from the band’s catalogue raisonné, including a tsunami-like “Take Me Out” and the infamous “Michael”, both from their self-titled debut in 2004, which won the wondrous Weegies a Mercury Music Prize that year.

Also in attendance was “The Dark Of The Matinée”, a trampy tune held extra dear by cinephile audience members for its being both a form of lascivious red velvet curtain in its own right and also a seeming-symbolic explanation (not that any was needed) for Franz Ferdinand’s ambrosian inclusion of “Jacqueline” to the 9 Songs film soundtrack. It was not just because they were wearing effortlessly provocative private school uniforms in this song’s video that “The Dark of the Matinée” also became the one where first listeners had their hopeful suspicions fully confirmed that Franz Ferdinand was indeed a band of the baddest good-looking boys in class. They could impress your parents and spot you a smoke out behind the bleachers, it was clear. We loyals have been trying to cheat off their hip quizzes and copy their fashionable glitterati presentations ever since, and this performance gave gazillions of unforgettable opportunities to do so.

Off 2005’s You Could Have It So Much Better, which garnered Franz Ferdinand an NME nomination for Best Album, “The Fallen” and “Outsiders” quickly overmastered an already-beseeching crowd. By the time the torrential candle-power of “No You Girls” from 2009’s Tonight: Franz Ferdinand (QRO review) strutted out next to “Evil Eye” and the pearlescent “Love Illumination” via 2013’s Right Thoughts, Right Words, Right Action (QRO review), the room was stroboscopic and stayed that way. “Always Ascending”, derived from the 2018 album of the same name (QRO review), then lolled about in the light with its Leonard Cohen levels of spoken word cool. If you cannot make it to the concert itself and want a sense of the chi, run right out and buy Live 2014 at the London Roundhouse as well as Blood, its dub-dream brother, a coruscating array of Dan Carey remixes of Tonight: Franz Ferdinand and you will be in the zip code of the zest.

As previously alluded to, there has long been a cinematic bent to Franz Ferdinand songs that exists even outside the inarguably Kodachrome kingliness of Kapranos himself, as a man and an artist, as well as the aforementioned “Matinée” demarcations. A reflexive relationship exists not just between screen and sound but betwixt the band itself and a recognition of the ever-reframing movie that is fame or public adulation. This parallel is emphasized in the filmic pair of new songs appearing as their own short sizzle reel on Hits To The Head. “Billy Goodbye” twists two separate slivers of the volcanized Velvet Goldmine soundtrack: the sidewalk camp of “Needle In The Camel’s Eye” by Brian Eno and the crowfoot shorthand of “We Are The Boyz” by Pulp. “Curious” has movie trailer opening credits for its video’s beginning and then proceeds to unabashedly do both Saturday Night Fever and The Dee Gees proud in its absolute commitment to the screen-memory some of us still have of a time when tongue-in-cheek was not the padlocked titan on pop-cultural colorways it is now.

If Creedence Clearwater were “the Boy Scouts of rock-n-roll,” as famously suggested by Paul Kanter, guitarist for Airplane (and most of the fried-out Fillmore fraternity) for their notable blue-collar work ethic and general eschewment of extracurriculars, then Franz Ferdinand are the futuristic Damnonii of amicable art-rock. Witnessing the deep-running sense of interconnective love and communion amongst their road-wizened fans is worth the price of admission on its own. Many of these Franz-faithful waited for over three hours and well into the wee hours post the show to chat like old friends with their rock-n-roll heroes–sharing old pictures, taking new ones, talking of their own artistic works in which Franz Ferdinand has appeared either in symbolic form or simply as the galvanizing influence. This is as it should be. This is what the music is for. Would that more bands of any era knew, remembered, and actively honored in Franz’s way the sacred contract they will always share with those who listen, for these are the folks who will always feel your every sung-syllable as a direct and welcome hit to the head.