<img src="http://www.qromag.com/wp-content/uploads/2009/05/franzferdinandmay7sm.jpg" alt=" " />Franz Ferdinand were on fire out at a sold-out Roseland Ballroom. ... 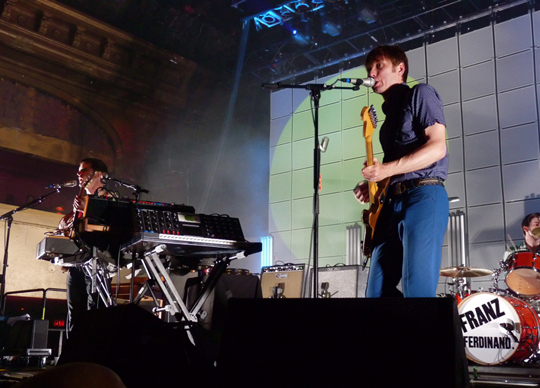 Give Franz Ferdinand credit: the Glaswegian four-piece have relied heavily on danceable, excitable energy, and their live show still has it.  The band spent little time in anonymity, blowing up with their first album, Franz Ferdinand, and its second single, “Take Me Out”, in 2004, and has continued to chart with 2005’s You Could Have It So Much Better and this year’s Tonight: Franz Ferdinand, even as their sound, so lively and winning at first, had trouble standing the test of time, first too rushed on So Much Better, then over-done with synths and tech on Tonight (QRO review).  But singer/guitarist Alex Kapranos is still an excellent showman frontman, and the entire group was ecstatic to playing to a massive – and sold-out – Roseland Ballroom in New York on Thursday, May 7th. 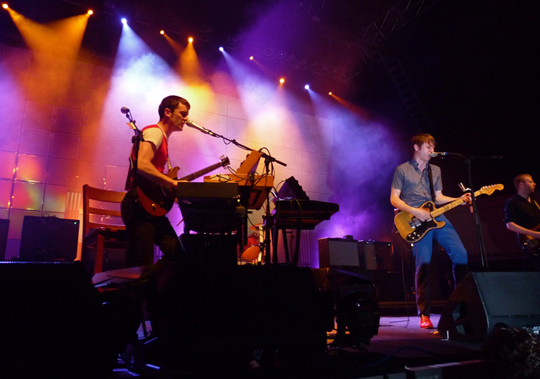 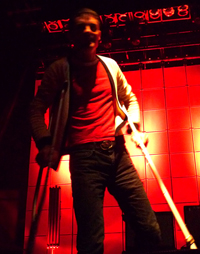 Though Kapranos still leads, special mention has to be made of guitarist/keyboardist Nick McCarthy, who’d broken his foot only the week before, but didn’t let that stop him.  McCarthy came out on crutches, but held them aloft to the crowd before sitting at his raised chair and handing them off to a roadie (who also did his guitar switches for him).  It was really great to see someone so happy about playing, despite his injury, plus the chance that his band’s success could have left him jaded.  And Kapranos didn’t shirk his responsibilities, if anything, upping his energy to make up for the hobbled McCarthy, with scissor jumps, clap leads, proclamations of love for New York (okay, they and every band probably say that at every city, but at least in New York, there’s a chance they actually mean it), and closing out the night by introducing the rest of Franz Ferdinand, and even dueling a temporarily standing McCarthy with guitars. 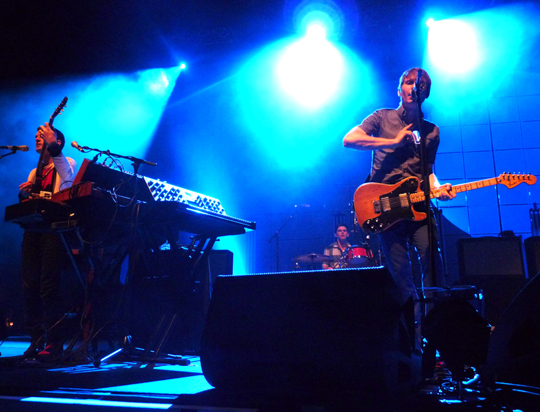 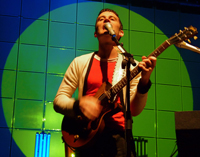 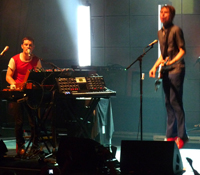 While they drew from all three albums, the night was still naturally dominated by singles and by their two self-titled records, as one was their newest, the other their classic (unfortunately, the marquee above Roseland did not say, “Tonight: Franz Ferdinand”…).  They also mixed and matched, waiting until the encore return for the one time they did two songs from the same album, back-to-back.  Interestingly, though, while the band started the night with a Tonight track, it was not a single, but rather the electro-rockabilly “Bite Hard”.  But that did indicate one aspect of the night that was to hold true: Tonight songs over-delivering their performance on record, thanks to the band’s excitement and energy, which can’t be captured in the studio. 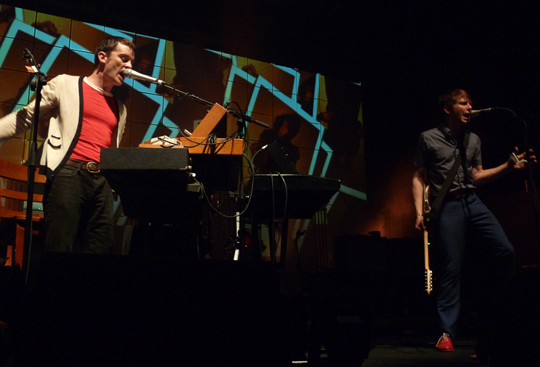 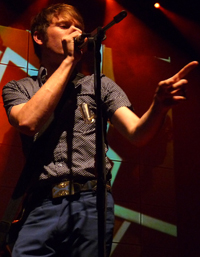 After “Bite”, Franz Ferdinand did largely stick to singles to start things off, including Franz Ferdinand’s “Dark of the Matinée” and “Michael”, plus So Much Better’s “The Fallen” and Tonight’s stand out, “No You Girls”, which was quite possibly the most fun song of the entire night, really earning itself as one of the band’s best pieces ever.  When the band left the singles path, such as with Tonight’s “Turn It On” and “Twilight Omens”, the show did slip a bit: one got the feeling that those were the songs from the new record that they had to play on that record’s tour, but won’t after this.  But singles “Walk Away” and “Do You Want To?”, both a bit cheesy on So Much Better, were so much better live.  And what more can be said about “Take Me Out”, which brought so many in the crowd to take out their cell phones and mini cameras to record it, lighting up the audience with eerie glows like a bunch of bug zappers. 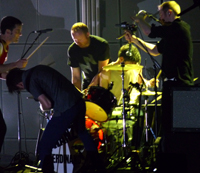 Franz Ferdinand eschewed any more singles until the encore break, and after “Take Me Out”, the set couldn’t help but slide a bit, with only Franz Ferdinand’s “40’” really standing out.  And the band eschewed Franz Ferdinand’s excellent “Jacqueline” when they returned (despite it being on the set list, albeit with a “?” next to it), instead launching into an extended version of Tonight’s “Ulysses”.  So long and over-synthed on the record, after all the energy the band had brought at Roseland it somehow worked – the latter instrumental half helped by openers Born Ruffians jumping in on percussion (which was way better than their own, grating set – QRO photos).  Two web-only promo singles ended the night, with Tonight’s also improved “Lucid Dreams” (in which Kapranos, McCarthy and bassist Bob Hardy all circled around drummer Paul Thomson and his set to do their own percussion performance) and Franz Ferdinand’s “This Fire”, featuring Kapranos’ introductions and duel with McCarthy.

Franz Ferdinand playing “Lay Me Down” live at Roseland Ballroom in New York, NY on May 7th, 2009: 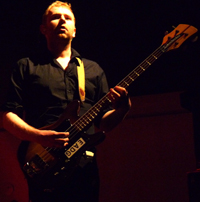 While a band selling out a huge place like Roseland can be great for them, it often hurts the fans, who are left cramped and distant from the stage (especially at Roseland, which put the stage at one end of the long side – QRO venue review).  One (older male) fan did often put his young daughter on his shoulders for a better view – and was so smack in the middle of the big crowd, security never really had a chance to get to him to tell him to stop.  And while it was certainly packed (especially in the house-left area beneath the balcony, with somewhat full-of-themselves fans who thought that they were clever by sneaking up for a better view that way, making it near impossible to go to the back bar – or for photographers to leave from the photo pit area), Roseland did giveth even as it taketh away, with an incredible light show, including an excellent back projection screen.  Moreover, Franz Ferdinand brought the kind of energy that could light up any room, no matter the size. 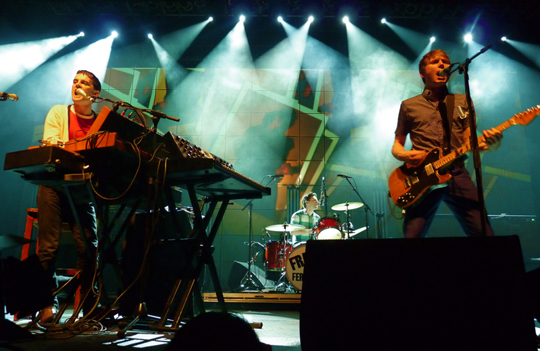