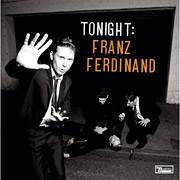 The taut Scots, Franz Ferdinand, rarely venture far from their famous, peppy rock recipe, but on their third album, Tonight: Franz Ferdinand, they at least explore more ways to present it.  But while adding only slight electronics, extended tracks, and some upstroke-based grooves, the four-piece seems willing, but ultimately unable, to escape their own rigid image.

Quick-tempos and 60’s-panning eroticism have always been Franz Ferdinand’s trademarks, and they deliver both yet again on Tonight:, but with seemingly clenched teeth.  The band’s masterful ability to inspire rug-cutting shines through on a few tracks, like “Turn It On” and “No You Girls”, with the band’s familiar coyness.  But the shout-out-loud funk of “What She Came For” and quirky synth on “Live Alone” only slowly twist in another direction and “Lucid Dreams” unexpectedly runs almost eight minutes with a labored synth solo that dominates the entire second half.

Keeping the black suit trend alive with a steady beat, Franz Ferdinand remains as rhythmically punctual as ever on Tonight:.  But they’ve loosened up even more this time, and much like dribbling a rock, they’ve knocked around their sound with difficulty, but without breaking anything.