Free Energy : Stuck On Nothing

<img src="http://www.qromag.com/wp-content/uploads/2010/04/freeenergystuckonnothing.jpg" alt=" " />How many bands can use the cowbell in this post-Ferrell era without a trace of irony?<span>  </span>Not many: Free Energy is one of a select... 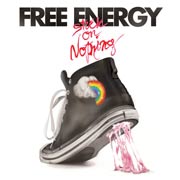 The first instrument to sound on Free Energy’s Stuck On Nothing is a cowbell.  That tells just about the whole story of this balls-to-the-wall ‘70s revival rock and roll five-piece from Philly.  You’ll hear tinges of Tom Petty and Thin Lizzy; you’ll hear crisp, vintage production from James Murphy (of LCD Soundsystem – QRO live review); you’ll hear a surprisingly wide range of instrumentation and acumen charted out within the musical ghetto in which the band has taken up residence.  But all you really need to know is expressed in the first 30 seconds of the opening, self-titled song “Free Energy” that kicks off with cowbell, cowbell, and more cowbell.  How many bands can use the cowbell in this post-Ferrell era without a trace of irony?  Not many: Free Energy is one of a select few.

Click here for photos of Free Energy at Roseland Ballroom in New York, NY on December 17th, 2010 in the QRO Concert Photo Gallery

Click here for photos of Free Energy at SPINhouse Live in New York, NY on August 12th, 2010 in the QRO Concert Photo Gallery

Click here for photos of Free Energy at SXSW 2010 in Austin, TX in the QRO Concert Photo Gallery

Click here for photos of Free Energy at WIRED Store in New York, NY on December 9th, 2009 in the QRO Concert Photo Gallery

Click here for photos of Free Energy at 2009 After the Jump Fest in Brooklyn, NY in the QRO Concert Photo Gallery

What are those wicked words and phrases that we use to describe musical atavism?  ‘Retread’, ‘rehash’, ‘derivative’, ‘tribute band’, ‘part deux poo’ (okay, no one really uses the last one…): Free Energy don’t fall into any of these unhappy categories.  The compositions are too well written, the enthusiasm too fresh, and the production too contemporary to label them a cover band.  Sure, “Hope Child” is a dead ringer for about 20 different Ramones songs… but those punkers never rocked a synth-driven postlude, did they?

A track like “Dark Trance” would sound old-fashioned in the hands of most other acts.  The song sounds like a ‘70s band casting back to the pure pop love ballads of the ‘50s.  With Free Energy at the helm, the narrative of heartfelt yearning assumes a credible glow.  Earnest delivery goes a long way.  On the other hand, the cloying toxicity of “Bang Pop” reaches near Hanson proportions with Miller Lite-riffs and late-Rivers Cuomo lyrics.  “All I Know” and “Light Love” are two interesting tracks that hint at what Free Energy might sound like if they weren’t selling the ‘Me Decade’ so hard.  Strings and synths figure into the mix for a fuller sound not hamstringed by slavish devotion to retro licks.  Maybe not the sort of mix that Free Energy fans are tuning in for, but it’s nice to know that the band has those sounds up its sleeve.

If you own a Molly Hatchet record, Free Energy’s Stuck On Nothing might be your thing.  Despite what some hipsters think, there’s no points deducted for being earnest.  It’s okay to use classic rock as a template without giving way to irony.  But hey, the more airplay you get, the more rules they are going to try and get you to follow.  You just gotta keep on rockin’, man.  R-O-C-K-I-N.