Up to 23 stages, above 1700 performers, over four days. What’s there not to like about New Orleans 33rd annual French Quarter Festival?... 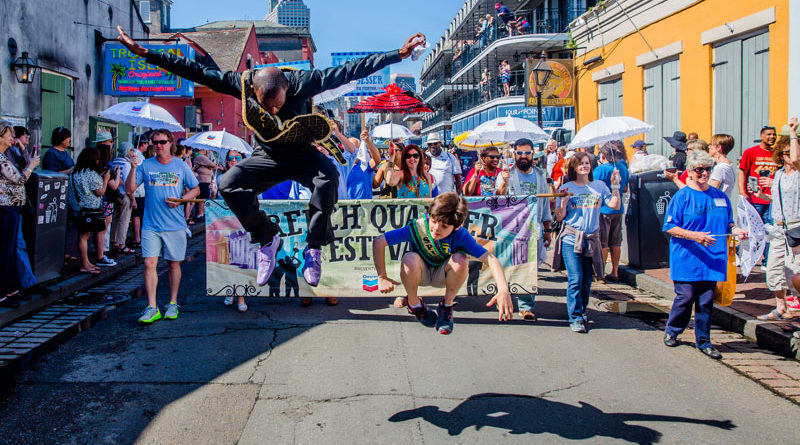 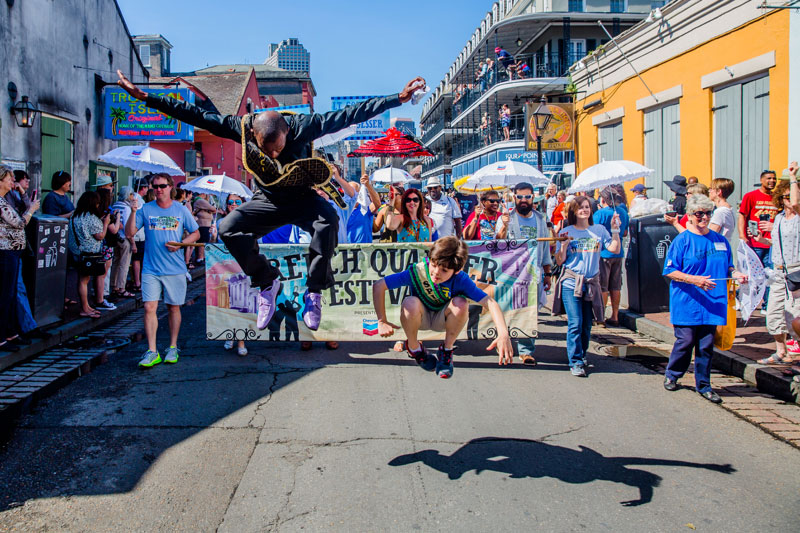 Up to 23 stages, above 1700 performers, over four days. What’s there not to like about New Orleans 33rd annual French Quarter Festival?

NOLA’s celebration of Louisiana’s own jazz and blues heritage is an annual event, held on the second weekend of April. And instead of the deluge of rain experienced by last year’s festivalgoers, this year’s acts, bands, artists, and music lovers were treated to four days of sunny and dry weather – with the free sun lotion stands in hot demand.

Also in hot demand on Thursday morning was a prime space along Bourbon Street, the starting point of the stunning festival parade. Commencing shortly after the slated time of 11am on Thursday morning, and led by Dancing Man 504, with his frequent spins, jumps, and frozen stares, also ably accompanied by ‘dancing boy’ Spidey, with his own bostin’ silky moves, the parade and second line, featuring Andrew Hall’s Society Brass Band and numerous floats, is a ‘must-not-miss thing’. 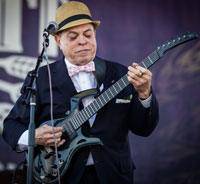 But music and partying waits for no man, woman or child. Even when the parade was entering Jackson Square, the stages were bursting into action. This FQF first-timer was wowed by the energy and top-level performance of Deacon John on the Abita Stage, one of NOLA’s own sons, and a local legend to boot, who learned his craft in dance halls. At 74 years young, Deacon John’s show included some a-hopping, some a-skipping and plenty a-jumping! Short ‘change-arounds’ are characteristic of the Festival’s meticulous programming, and fifteen minutes after Deacon John waved us farewell, Treme-based Kermit Ruffins hit the stage with his Barbeque Swingers band and an array of talented performers. 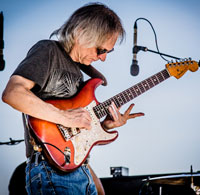 A move out of the burning sun and into some shade took us to the Tropical Island Hand Grenade Stage, with Lynn Drury playing her brand of ‘Mississippi Grit and New Orleans Groove’, followed by ‘King of Slydeco’ Sonny Landreth delivering an incredible 90-minute set with effortless ease. Even passengers on Steamboat Natchez were appreciative of Sonny’s slidework as they passed by on their lazy cruise.

Early closing of stages, in comparison with other major U.K. festivals that programme towards midnight, means that the local jazz and blues bars and cafes in Frenchmen Street and Decatur Street are places to drift off to. But not before a visit to the Smokefree NOLA Stage in Jackson Square to see trombonist Delfeayo Marsalis with his Uptown Jazz Orchestra. 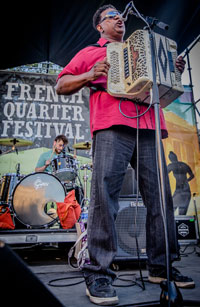 More stages opened up on Friday, with Benny Grunch & The Bunch on the In The Shade Stage at the Louisiana State Museum Old U.S. Mint, followed by a fantastic stroll along the Mississippi River towards the Abita Stage, to see Irma Thomas, knock the ball-out-of-the-park with her sweet soul. A change of scene, a change of style with Zydeco-heaven on the Chevron Stage, and plenty of street dancing, partying with the Lost Bayou Ramblers and then Chubby Carrier & The Bayou Swamp Band. Back to the banks of the Mississippi though, for a fabulous performance by Afro-Cuban jazz groovers Otra on the Tropical Island Hand Grenade Stage.

And then some more… with the incredible tribute to Allen Toussaint over at the House of Blues, featuring a whole host of special guests including Leo Nocentelli of The Meters, and local hero Walter Wolfman Washington, amongst a spectacular array of jazz and blues talent.

As smaller stages opened up over the weekend, it was time to get in a little deeper and embrace the spirit of the French Quarter Festival. Visits to the House of Blues Voodoo Stage (Magnetic Ear), Popeyes Brass Band Jam (Treme Brass Band), Omni Royal Orleans Stage (Meschiya Lake) revealed a richness of talent beyond the principal stages, and street musicians and bands appeared to be on every intersection along Decatur Street. 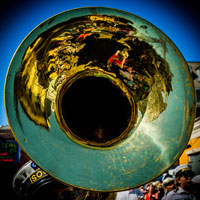 The weekend’s entertainment finished on a staggering high with a Lindy Hop street dancing lesson on the French Market Traditional Stage – with some real Lindy Hoppers bopping all the way through the amazing Tuba Skinny.

By Sunday evening, New Orleans may have said farewell to the 2016 French Quarter festival, but QRO’s positive memories of such a fabulous party hosted by an over-generous city will live long in the mind. 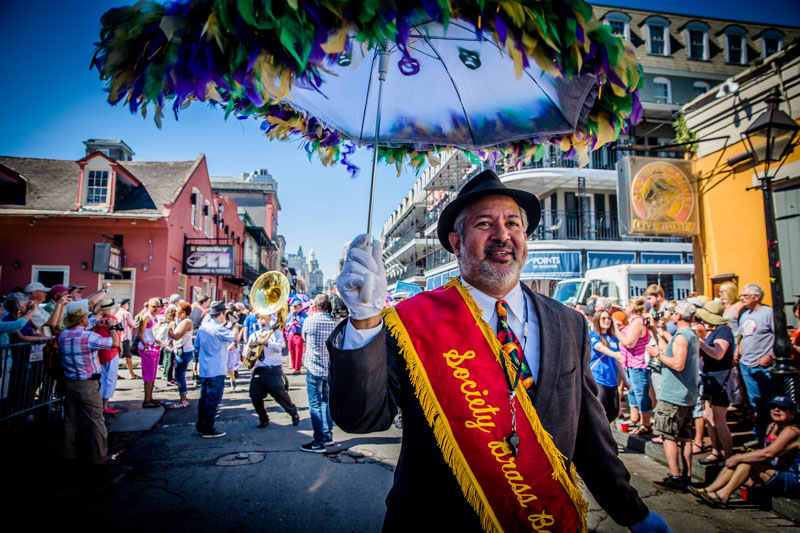