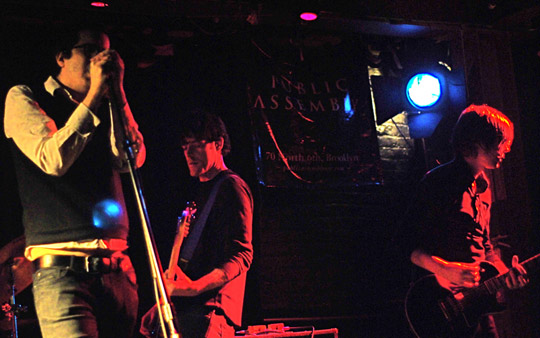 Brooklyn’s Freshkills (no, they’re not from Staten Island, thank God…) might get filed under ‘yet another Brooklyn indie band’, but their live shows prove to be something more.  Building upon last year’s self-titled sophomore LP (QRO review), the band played a short, sweet set in the wee hours of Friday night/Saturday morning on January 23rd at their home borough’s Public Assembly (QRO venue review).

The blistering drive started, like Freshkills, with “Asleep Means No”, and it was the first of many tracks from that record to really over-deliver live, thanks to the band’s punk rock pressure, which doesn’t go overboard.  Maybe no Freshkills piece was more improved than the following “Enemies”, as the band’s tendency on the record was unfortunately to go a little too grand, but in the somewhat confined Public Assembly, the sound went out into the crowd rather than up into the rafters.

The audience was a rather strange mix of drunken dancers, a high lesbian contingent for some reason, a few older folks, and yes, some Brooklyn hipsters.  It all gave the jumping dance-punk of “I Know I Know” a bit more energy, but also sapped some from the following “The Essential Power Man and Iron Fist”, as the new song’s darker crush lacked some of the hook of the best Freshkills tracks.  But the band brought it back with “My House”, as singer Zachary Lipez lead them in greater explosive press. 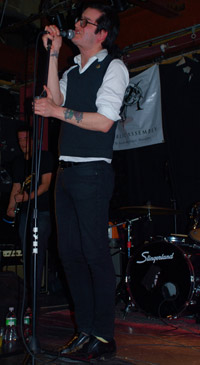 However, Freshkills did not just leave it full throttle throughout the show, as “I Quit Smoking” went bigger and slower, better utilizing the grand nature of their record.  But the band still wrapped up the night with the speedy frenetic “Revelations” (unfortunately missing maybe Freshkills’s best track, the pressingly grand “Caroline”), with Lipez collapsing to the ground at its end.  Between his Williamsburg horn rims (see: Matt Johnson of Matt & Kim – QRO interview), height, and relatively formal clothes, Lipez looks a little like a younger, larger Craig Finn of the borough’s Hold Steady (QRO live review), but live, his voice and presence are more of a throwback to the New Wave heartbreakers of the eighties – if the vocalist sang for one of the talented punk bands of that decade.  But whatever Freshkills are, they’re not ‘yet another Brooklyn indie band’ (though in the crowd was guitarist Nick Zinner of early Brooklyn indie hit Yeah Yeah Yeahs – i.e., not the one with same last name as your correspondent…), thanks to shows like these.