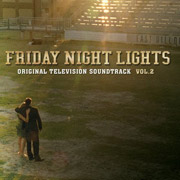 When the 2004 film Friday Night Lights was made into a TV series (after having originally been a book), it seemed an accessible dramatic series for Middle America, being based in small town U.S.A., and centered on the high school football team.  Yet the show struggled in the ratings, not to mention in whom exactly it was being pitched to, as the male-draw football theme contradicted the more female-focused personal drama.  Friday Night Lights popped in and out of NBC’s schedule (and not just on Friday evenings), before doing a strange journey to DirecTV in 2008, saved from writer’s strike-induced cancellation by a fan campaign, and has just come back on at NBC for its current fourth season (though after the season aired on Direct TV first).  The first soundtrack was similarly confused: while most of the film’s soundtrack was written by Austin post-rock icons Explosions In the Sky (QRO photos), the TV soundtrack release was dominated by more accessible fare, such as OutKast & The Killers (QRO album review) – the only thread seemed to be that most of the bands were from the flyover states (but also on it was The U.K.’s Stereophonics – QRO album review…).  For the second volume of the soundtrack, Friday Night Lights has gotten a lot more focused & connected, with singer/songwriter country/folk and some classic rock, which evokes the heyday of the Middle America high school football hero.

That all being said, Volume 2 opens with the one piece outside that arena, “Percussion Gun” by White Rabbits (QRO spotlight on).  The single/opener/best song on their most recent It’s Frightening (QRO review), it’s still great, but not representative of what is to come.  The southern classic rock, but on the slower side, of the following “Sway” by Heartless Bastards (QRO live review), is much more fitting, with singer/guitarist Erika Wennerstrom (QRO photos) somewhere between solo and in a band.  “Sway” is the only female-led piece on the soundtrack, though Band of Skulls does a good male-female dirty-grind procession duel on “I Know What I Am” – you might not want a whole album of it, but one does work.

However, the main theme of Volume 2 is the solo alt-country singer/songwriter, in the likes of the accomplished A.A. Bondy (“I Killed Myself When I Was Young”), piano maudlin Augustana (“Fire”), sweet & simplistic Jakob Dylan (“Something Good This Way Comes”), road echo-twang from punk-turned-alt-country John Doe (“The Meanest Man In the World”), old-timey country-sad Avett Brothers (“If It’s the Beaches”), a little grooving AM (“What You Hide”), gospel-harmony Sufjan Stevens (“Come Thou Fount of Every Blessing”), and dark, echoing alt-folk Fink (“This Is the Thing”).  But even in this more specific genre, there are highs & lows, like with any multiple-artist soundtrack: Bondy (QRO album review) does it best straight-up solo, while Dylan’s kind of unimpressive (and the build near the end of Bondy’s “Killed” evokes the far superior elder Dylan), Doe has the best gravel, and Stevens (QRO live review) & Avett’s (QRO album review) do their rather singular things well.  Though this focus, not to mention ending with the series’ main title theme song, are rather a step away from Explosions In the Sky – what is less like the epic, fuzzed instrumentals of post-rock than alt-folk stripped down to mostly just vocals?

At the end of Season Three, Friday Night Lights main character Eric Taylor (Kyle Chandler) is removed as head coach of the Dillon Panthers, and is given the coaching job at the reopened East Dillon High School.  The fourth season, which premiered on NBC on May 7th, looks to give the show something of a new direction & characters (essential for a show based in high school, as kids don’t stay in high school long enough to make syndication…).  However, the following fifth season will be its last (once a series makes five seasons, it’s available for syndication, a.k.a. where the real money is made from scripted series), and while Friday Night Lights may never reach the potential of the pilot & first season, the second soundtrack is a nicely more focused modern Americana compilation.

MP3 Stream: “Killed Myself When I Was Young”